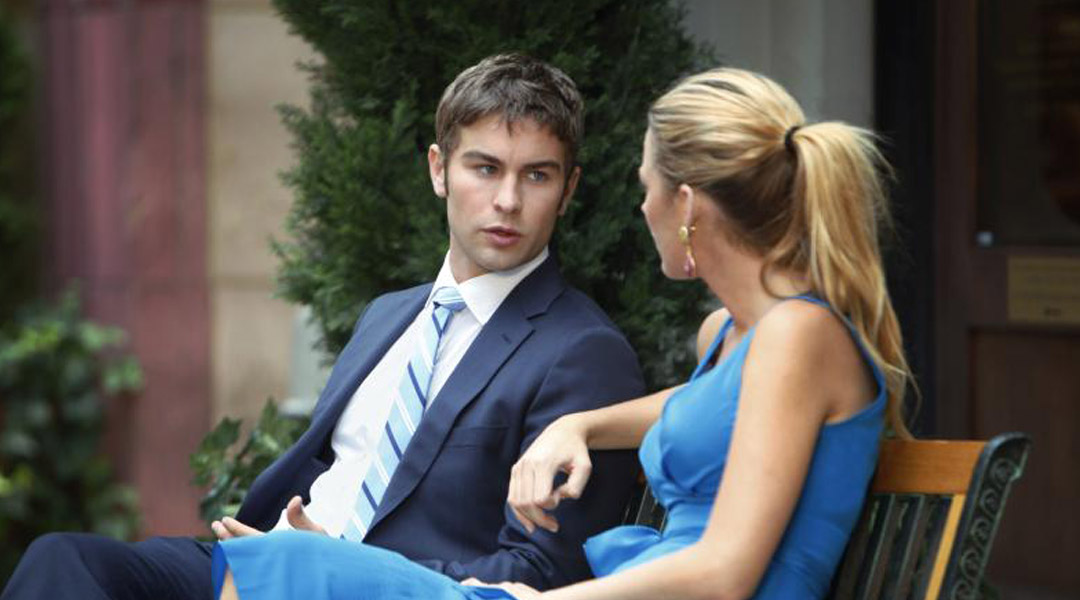 Sage: I think it’s really brave. You deciding to run The Spectator on your own. No investors, no partners, no safety net.
Nate: Wait, are you here to freak me out or write a paper on my paper?

Nate: All right, so we’re not too far from where Gossip Girl said she is.
Chuck: What makes you so sure we’re not being lead on a wild goose chase, Nathaniel? I mean Gossip Girl is only slightly less trustworthy than say, Georgina Sparks or… me.

Steven Spence (Barry Watson): Sabrina, you didn’t tell me you invited friends.
Blair: That is so Sabrina.
Nate: Oh, she loves surprises.

Nate: This is a long time for you to be mad at Blair just for being Blair.
Serena: I’m not mad, I’m maturing. We’re just naturally growing apart.

Sage: I’m not sleeping with anyone but you. And it’s legal, I checked. So can we please just go back to your place and do that?
Nate: No! You’re seventeen. And I’m pretty sure you’re grounded.

Nate: There are details in here the world doesn’t need to know. These are people you care about.
Dan: Nothing good came from my protecting them. Once I realized I live in a world where Chuck Bass gets the girl, everything seemed very clear. I’m not playing by anyone else’s rules anymore. I’m making my own. If you don’t want this, I can self-publish.
Nate: No no no, I want it. I’m just saying, I’ve only read one page and I’m guessing you might lose some friends and family.
Dan: My “friends” chased my sister out of town and chose a guy who traded her for a hotel over me. And my “family”… is sleeping with a con artist. I’m not losing anything here. I’m taking what’s mine.

View all quotes from High Infidelity

Nate: I heard you on the phone earlier this morning. It didn’t sound like Blair.
Chuck: Deeper voice, darker mind.
My uncle Jack. His people on this ground in Dubai are helping me to find out who the mystery man with Bart in Amira’s photo is.
Nate: Did he come up with anything?
Chuck: Not yet.

Serena: I’m supposed to be mentoring her.
Nate: You? A mentor?
Serena: Just go with it.

Nate: Listen, I wanted to thank you for choosing to advertise with us at The Spectator this week. It’s been a real pleasure doing business with you and your team.
Erica Winograd: We were very excited about Dan Humphrey’s inaugural serial. We knew it would draw a lot of eyeballs.
Nate: And it has. And I know Dan’s piece next week will garner even more attention. You should definitely think about buying up some more space for that one as well.
Erica: We did, Nate. In Vanity Fair.
Nate: Wait, I’m sorry. What?
Erica: Dan’s serial is continuing in Vanity Fair. Yeah, I thought The Spectator was just a one-time occurrence. Which is too bad for me because Graydon is charging ten times what you did for ad space.

Nate: Why the hell do my advertisers think that Vanity Fair is publishing the ret of your serial?
Dan: Because they are.
Nate: Dan. we had a deal.
Dan: A handshake is hardly a deal.
Nate: Oh my god, I think I’m going to hit you.
Dan: I told you last week it was a bad idea to mix business and friendship. You wanted me to go to Rufus before publishing the piece. And today when he, when he threatened a lawsuit you freaked out.
Nate: I was trying to protect my newspaper.
Dan: What do you want me to say? Vanity Fair is the big time, and the more readers I have, the more power I have. It is that simple.
Nate: I thought we were in this together.
Dan: We were. And then something better came along.
Nate: Okay, now I know I want to hit you.

Where the Vile Things Are

Nate: You surfing the Empire CCTV again? What, is Olivia Munn staying here?

Chuck: This is the security footage from the van der Woodsen place.
Nate: How’d you get your hands on that?
Chuck: Well Vanya can’t be bribed but the night doorman was remarkably open to a cash payment.
Nate: So what are you looking for?
Chuck: When Ivy was in the apartment she said that
Bart walked in with an envelope he held onto rather tightly. I was hoping to see a return address or some distinguishing marks.
Nate: Did you find anything?
Chuck: Indeed. The envelope had the seal of the First
International Bank of Sudan.

Chuck: Why did you let him leave without getting the information?
Nate: He wasn’t going to give it to me. So I figured I’d just take it. {he pulls out the phone}

Nate: How could someone who hides everything for everyone else pick his birthday for his password?
Chuck: I underestimated you, Nathaniel.
Nate: Well you’re not the first person to say that.

Nate: Traffic… traffic jam. Traffic light. Maybe they had a meeting in a car.
Chuck: Or it’s Bart’s oil trafficking or something else he’s illegally selling.
Nate: Like a nuclear bomb in a briefcase.
Chuck: You watch too many movies.

Nate: Do not tell me in some twisted turn of events that that sex tape made you miss him.
Serena: No, it’s just… we spent some time together and I don’t know. It brought up some memories.
Nate: Serena, you’re really vulnerable right now after Steven broke up with you. It’s too soon to have real feelings for Dan.
Serena: But what if those feelings never went away?

View all quotes from Where the Vile Things Are

Save the Last Chance

Nate: What do you want?
Dan: I came to apologize. I’ve been doing some soul-searching.
Chuck: That implies you have a soul.
Dan: That’s funny coming from you.
Nate: That’s hilarious. I mean who would have thought Chuck Bass turns out to be the good guy and Humphrey the villain.
Dan: Well I really want to turn that around. I’m sorry about what I wrote. About all of you. I really want to make amends.
Chuck: Well if you really mean that, you just gave me an idea.

Nate: I don’t know why you’re here, but get out. Before security throws you out.
Bart: That’s not a nice way to greet your partner.
Nate: What are you talking about?
Bart: You are indebted to me, and I am here to collect. So unless you want to lose everything, you’re going to help me defeat Chuck. Buck up, it’s gonna be fun.

Nate: Chuck… it was, uh, it was all my fault.
Chuck: What was?
Nate: There was nothing I could do. He cornered me.
Chuck: He who? My father?

View all quotes from Save the Last Chance

Chuck: Where’s Monkey? I found his crying at my door comforting.
Nate: I had Ivan from housekeeping take him for a walk.
Chuck: Why? Because you were too busy
reading up on new ways to betray your best friend?
Nate: Chuck, you know how sorry I am. Bart’s threatening to send me to prison for cooking The Spectator’s books. And I don’t want to hurt you again so I’ve been going over these documents just… trying to figure a way out of this whole mess.
Chuck: Good luck with that. Bart Bass is a grand master of manipulation. He has ruined me. You’ll be child’s play. My advice is to lie back and think of England.

Nate: Chuck. Chuck, wake up. Seriously, wake up. Bruce Caplan is dead.
Chuck: The guy was a two-bit crook. Who cares?
Nate: You should. I just got off the phone with his secretary. Apparently Bruce died only a few days after our meeting. He fell off the Bass Enterprises’ yacht.
Chuck: Is there a point to this sob story?
Nate: Your father probably figured out it was Bruce that tipped us off to the microfilm in the painting. Do you honestly think that Bart had nothing to do with his death?
Chuck: Even if he did, I promise you he covered his tracks or destroyed the evidence or had Lily do it for him. Now get out of my room.

Blair: What the hell took you so long?
Nate: And good morning to you too, Blair.
Blair: Chuck banned me from The Empire? He’s banished me before but that was when we were on a sex fast.
Nate: What do you want me to say? Chuck has hit bottom. All he does now is drink in bed and argue with Monkey.
Blair: Well I had no idea it was that bad.
Nate: Yeah, it’s that bad. He’s even given up on defeating Bart.
Blair: Well that can’t happen. We can’t let Bart win. We have to reinspire him.
Nate: What do you think I’ve been trying to do? Chuck didn’t even care when I told him Bruce Caplan mysteriously drowned.
Blair: His dentist?

Nate: Hey Dan. Before you go. {he punches him} That was from all of us.