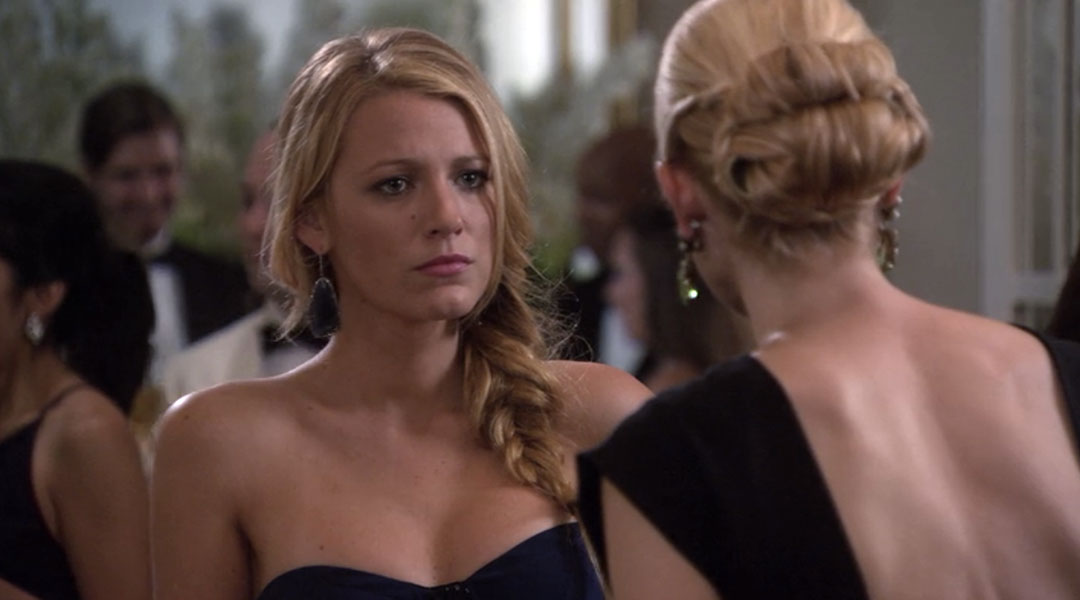 Gossip Girl: New day, new debs. All dressed up to enter high society. But one fashion faux pas and the dressing down will last a lifetime.

Blair: Why are you still chewing? Tell me what you think.
Dan: I think, ah, it’s old school. Not in the good way. In the, in the literal way. Like what old ladies used to wear to school.
Blair: Well it’s traditional. As am I. I need to remind the world I am not the hyper-sexual heathen Nelly Yuki labelled me.
Dan: There’s traditional and there’s missionary. Which does not work for the dress. Or you, as I recall.

Blair: Being polite does not make me a prude.
Dan: So why fight your raunchy reputation? Shock value is what got my Inside Out serial attention.
Blair: Well my audience was titillated when Sage stripped down to her skivvies.

Georgina (Michelle Trachtenberg): Do you know how many hours I spent searching for you? I hate it when you play hard-to-get.

Georgina: I’ve come to wrestle the Blair chapter from your hot little hands.
Dan: I haven’t finished it yet.
Georgina: You’re lying. You’re here in some desperate attempt to regain Blair’s love, but you know when she reads what you wrote she’s gonna hate you forever.

Dan: That lucky charm looks like an engagement ring.
Dorota: No. Is engagement ring on necklace. At least until Mr. Chuck defeats Bad Dad. Miss Blair never leave home without it. I need to prepare for mad mood.

Serena: I don’t know how I’m supposed to fix a problem if I don’t know what the problem is.
Nate: See, this is where my female advice skills fall short. Most of my exes would just steal my phone or go through all my emails. {Serena perks up} That was a joke.
Serena: I know.

Blair: Lucky for you I have the hottest new line to save your sartorial debut.
Sage (Sofia Black-D’Elia): Why would you want me anywhere near your clothes after I left them on the runway at your fashion show?
Blair: Well like it or not, your stunt branded me a provocateur, so I’m embracing it.
Sage: The words I read were “distasteful” and “majorly sluttish”.
Blair: Semantics.

Gossip Girl: They say a diamond is forever. Or maybe never. It just depends on who finds it first.

Chuck: What are your interests exactly?
Ivy (Kaylee DeFer): To get Lily to leave me alone.
Chuck: May I suggest you stop following her around in cabs.

Steven (Barry Watson): And now that you know I’m just going to get Lily’s permission and propose to Serena tonight.
Sage: Screw Lily, I’m not giving my permission.
Steven: I’m not asking.

Jessica (Alice Callahan): Your Chuck chapter is my favorite.
Dan: Thank you.
Blair: You put out a Chuck chapter? After I gave you your first decent place to live. Go. Pack your things.
Dan: Don’t you want to read it before you kick me out?
Blair: I read Nate’s chapter. And you were supposed to be his friend. You hate Chuck and everything to do with me in relation to Chuck.
Dan: Yeah, that’s not true.
Jessica: Don’t worry, Blair. You’re not even in it.
Blair: What? That’s impossible. There is no Chuck Bass chapter without Blair Waldorf.
Dan: There is while he focuses on the battle with his father, which is what the chapter is about.
Jessica: Dan made him seem like a super hero, single-mindedly fighting evil.

Lily: It just doesn’t seem that long ago that you were in love with Dan. And now that Rufus and I aren’t together, well, I thought you two might be.
Serena: Yeah well I thought that too for a little while, but, you know, then Dan and I had that huge falling out and I met Steven.

Blair: I would need a two-tiered plan. Some kind of protection. Your generation can’t be trusted with scheming on good faith.
Sage: I promise I’ll behave. Just please stop her from marrying my dad.

Blair: Serena’s enthusiasm is like the Bat Signal for bad ideas.

Dan: Wow. You look beautiful.
Blair: You’re quite the Dapper Dan yourself. Unfortunately Jessica’s off somewhere with panty hose on her head so she no longer requires an escort.
Dan: Um, I’m not gonna ask. But I’m not dressed for Jessica. I know Chuck’s busy and no one should go to Cotillion alone.
Blair: Well I suppose I could overlook your upbringing now that you’re a regular feature in Vanity Fair.

Gossip Girl: Spotted: One man leaving Harry Winston empty handed. Steven Spence walked in with a ring and left without one. I wonder what—or who—he’s returning.

Serena: You knew how much I wanted this.
Lily: I knew you wanted someone. But let’s face it, Serena. You don’t have boyfriends, you have life rafts.
Serena: That you keep taking from me and leaving me to drown.

Bart Bass (Robert John Burke): Stop lying, Lily. I caught Larissa’s daughter cleaning up after you.
Lily: Bart, Larissa’s daughter is four.
Bart: Then who was the 20-something blonde I caught with Chuck’s scotch glass?
Lily: Ah. Let me guess. 5’4, slim. Could pass as Serena’s cousin? Ivy.

Lily: Charles, how could you? After everything I’ve done to try to make peace.
Chuck: I don’t want peace. I want you to help me make him pay for what he did.
Bart: Put a silver spoon in your mouth? Or try to raise you as a single parent? Which one do you want to punish me for first?

Blair: I would never try to take away your happiness. Well, at least not permanently. If you love him and it’s meant to be, then I want it too. Unfortunately kids today are not like we were. They’re unpredictable and alliance-free. There’s no line they won’t cross.
Serena: You know, I thought Sage was really starting to like me.
Blair: Well you were wrong. And now she’s gone rogue. She’s come up with a plan of her own that I am scared is more dastardly than even I could imagine. You have to warn Steven.

Blair: I thought Chuck sleeping with Jenny was the most despicable thing someone could do to me, but this is worse. Because you pretended to be better. At least I ended up with the right person.
Dan: You ended up with no one. Chuck will never be finished fighting with his father. And that ring around your neck? Is never gonna be on your finger.
Blair: I would rather be with no one than with you.

Nate: Wait, you broadcast the sex tape?
Sage: Would you want your father to marry Serena?
Nate: She’s my friend and you humiliated her.
Sage: I didn’t force her to do it for the camera. I simply reported it. Like you did with my dad and Lily on the Spectator.
Nate: That’s a newspaper, not a society gala. And I didn’t do it to hurt them.

Nate: You know what? You may be legal but this is way too high school for me.

Blair: You took Nate’s virginity on that bar—when I loved him. You just needed to prove that you could still take anyone I want.
Serena: The only one you want is Chuck.

Blair: You know, Serena, I kept hoping that this was just like all of our other fights, and that no matter how much we hated each other we would still always be best friends. But you were right—what you said before my fashion show. We haven’t been friends for a long time. I just couldn’t see it.

Gossip Girl: We all came into this world naked and alone. Looks like S is leaving it that way too.

Gossip Girl: There’s something to be said for having a partner in crime. Sometimes you have no choice but to go it alone.

Gossip Girl: After all, you’re the only one that can answer for your sins.

Serena: Hey, thanks for being humiliated with me.

Gossip Girl:Once you’ve answered for your sins, there’s nothing in the way of starting a whole new partnership. XOXO —Gossip Girl.