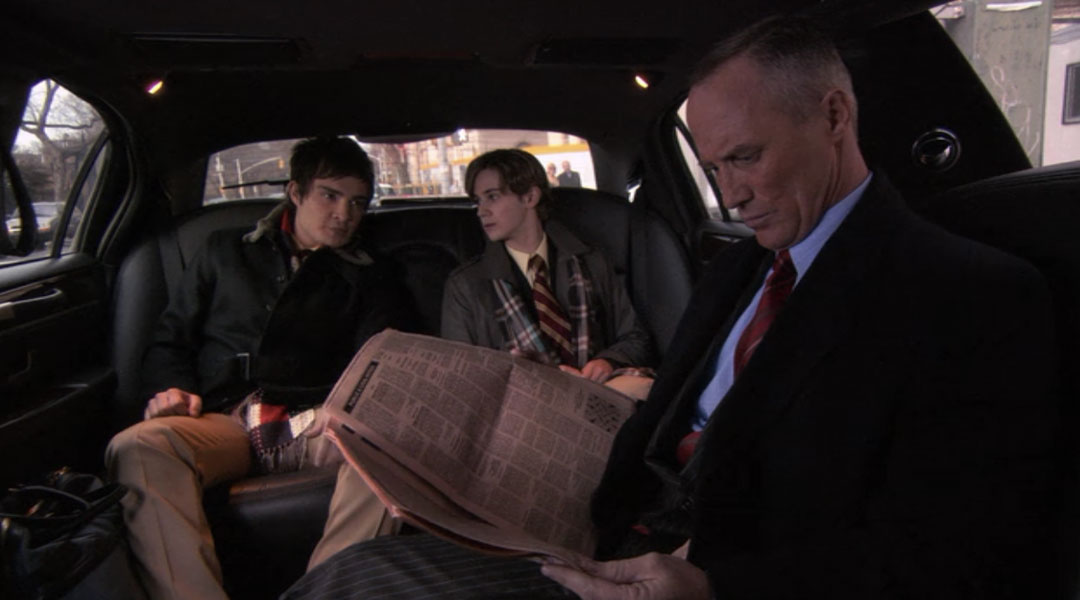 Gossip Girl: Wakey wakey, Upper East Siders. Spring Break is done and I’m starved for a dish. Were you sunning in Crete or sinning in Croatia? Give me the deets. And has anyone spotted our ex-Queen B? Where does the dethroned royalty vacation these days?

Dorota Kishlovsky (Zuzanna Szadkowski): Club Bed is over. First day back to school.
Blair: I can’t, Dorota. I don’t feel very well.
Dorota: Serena come to get you soon.
Blair: Call her and cancel! And cover my mirrors. I’m in mourning for my former life.

Chuck: All right ladies, my sister needs to shower. Make room. I’m just messing with you.

Serena: Okay, let’s get one thing straight. Our parents may be insisting on blending our households, but I am not your sister. I do not share any of your DNA, nor do I ever wish to.
Chuck: Then I suggest you get new hand towels.

Serena: What are you doing?
Eric: I’m hiding from my valet. He wants to put my socks on for me. Your servants are very attentive.
Chuck: You should meet Brigitta, the new Latvian maid.

Chuck: And how is Lily von Bülow today?

Blair: At least you get to wake up from your nightmare. I’m living in mine.

Gossip Girl: The French revolution had cake. The American had tea. But it looks like the overthrow of Blair Waldorf, well… {Blair gets nailed by some yogurt} Who said you need a silver spoon to dole out just desserts.

Nate: So I may have told Blair you told me the truth about her and Chuck. And I’m sure she didn’t react well to that. But you don’t know what you’re dealing with here.
Jenny: Oh, I’m not scared of Blair, Nate.
Nate: I’m not talking about Blair, I’m talking about your new circle. I mean they’ve been friends with Blair forever and look what they’re doing to her. When you fall out of line what do you think’s gonna happen to you?
Jenny: Well, then I won’t fall out of line.
Nate: I’m not saying you’re gonna— It’s just, you’re not like those girls, Jenny.
Jenny: It’s weird, Nate. Since they’re my friends you’d think we’d have some stuff in common.
Nate: Okay. Well I will give you this. You’ve got good aim.

Serena: There’s Chuck with a mini-Chuck.

Blair: How do you manage to get out of everything unscathed?
Serena: Because I’m nice. You should try it sometime. Um, c’mon, compliment me. Tell me my hair looks beautiful.
Blair: But your hair looks disgusting. Did you even shower?
Serena: B, I say this out of love. But your being a bitch is what got dairy in your hair in the first place.

Lily: Oh, don’t put your dirty package on the table.
Chuck: If I had a dime for every time I’ve heard that.
Bart (Robert John Burke): That’s enough, Chuck.

Gossip Girl: Wake up, Little Jenny. The bitch is back.

Bart: You almost ruined things between Lily and me before. I’m not going to let that happen again.
Chuck: What are you talking about?
Bart: I’m talking about that vulgar stunt you pulled at dinner.
Chuck: I didn’t send Serena that package, and quite frankly her “Violated Virgin Mary” act is getting pretty old.

Decorator: And here’s the second choice for the centerpiece.
Lily: Well we could put this one on a mylar tablecloth and pretend it’s a Bar Mitzvah. {Serena walks in} Ah, there you are.
Serena: I have a date with Dan.
Lily: Could you excuse us?
Serena: You’re going to say something worse than the Bar Mitzvah remark?

Iz (Nicole Fiscella) about the look on Jenny’s face: I don’t think she was surprised.

Hazel (Dreama Walker): Oh my god. That’s my mother’s dress.
Jenny: No, you guys. I got this at Resurrection. Remember I was telling you about the really great dress I bought?
Penelope (Amanda Setton): Her mother’s one-of-a-kind Valentino that just happened to disappear from her closet.
Jenny: She must have given it away and forgot or something.
Rufus: Are you calling my daughter a thief?
Blair: Excuse me. This feels private. So I’m gonna head out now. I have a table at Butter. Reservations under Waldorf in case there’s an after-party.

Gossip Girl: Spotted: Jenny in a red dress with the red hands to match. Looks like Utter Disgrace is the name on the label.

Rufus: Blair said they told you the original party had fallen through so that they could surprise you with a better one.
Jenny: Blair’s a liar. You got played.
Rufus: She also said you were afraid the girls wouldn’t accept everything about you. She knew you were wrong. She wanted you to feel like you had nothing to be ashamed of. Is that a lie too?

Rufus: Where did you get the dress? And I know you didn’t make it because your sewing machine is gone.
Jenny: You have no idea how hard it is, Dad. I sold my sewing machine, okay?
Rufus: What?
Jenny: Yeah. And a lamp and some jewelry.
Rufus: Why?
Jenny: Because I had to. Dad, you think that you could just send me off to school with a plaid skirt and a Metro Card and that everything would be okay.
Rufus: I am not apologizing for not having a private plane for you, Jenny.

Eric: Chuck is fun, okay? He’s cool and he doesn’t treat me like some freak that just got out of the Ostroff Center.
Serena: Who treats you like that?
Eric: Uh, guys at St. Jude’s, the girls at Constance. Suke, at the Korean deli on 75th street.

Serena: What the hell’s your problem?
Chuck: Specify the context.