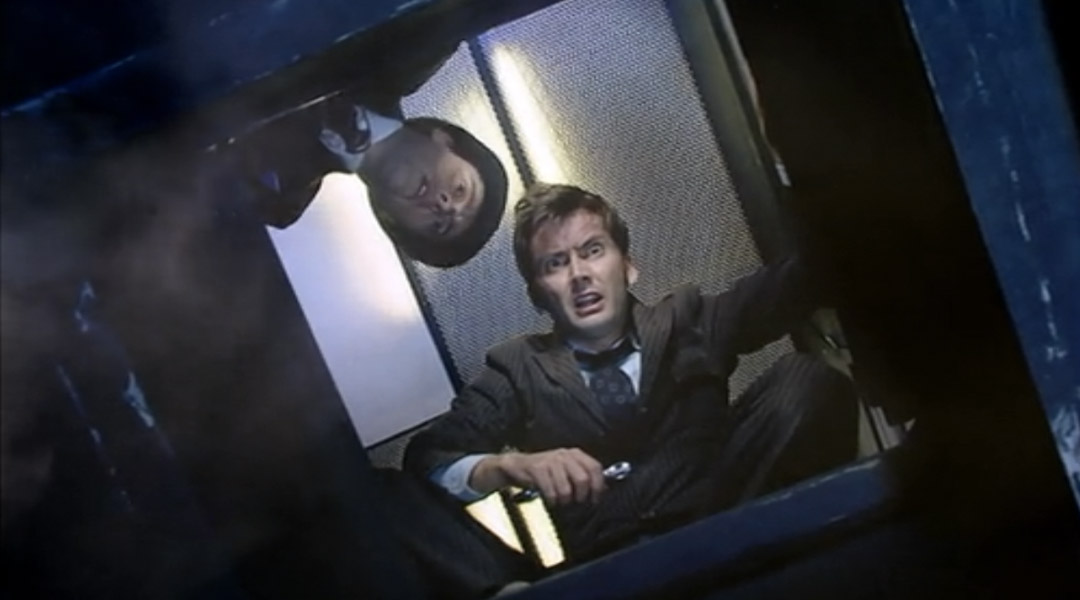 Sally Calypso (Erika Macleod): Salutations. This is Sally Calypso with the traffic news at 10:15. We’ve got reports of a multiple stockpile at Junction 509. With a spate of carjackings reported on New Fifth Avenue. So you take care now. Drive safely!

The Face of Boe (Struan Rodger): He has arrived.
Novice Hame (Anna Hope): What should I do?
The Face of Boe: Find him before it’s too late.

Martha: You’ve brought me to the slums?
The Doctor: Much more interesting! It’s all cocktails and glitter up there. This is the real city.
Martha: You’d enjoy anything.
The Doctor: Oh, that’s me.

Martha: When you say “last time” was that you and Rose?
The Doctor: Ah… yeah it was, yeah.
Martha: You’re taking me to the same planets that you took her?
The Doctor: What’s wrong with that?
Martha: Nothing. Just ever heard the word “rebound”?

The Doctor: Sorry, but hold on a minute. What happened to your parents?
Young Girl: They drove off.
The Doctor: Yeah, but… they might drive back?
Young Girl: Everyone goes to the motorway in the end.

Martha: But how are you supposed to live inside this thing? It’s tiny.
Cheen (Lenora Crichlow): Oh, we stocked up. Got self-replicating fuel, muscle stimulants for exercise, and there’s a chemical toilet at the back. And all waste products are recycled as food.
Martha: Okay. {she stops eating}

The Doctor: I once met the Duke of Manhattan. Is there any way of getting through to him?
Brannigan: Oh, now ain’t you lordly.
The Doctor: I’ve got to find my friend!
Valerie: You can’t make outside calls. The motorway is completely enclosed.
The Doctor: What about the other cars?
Brannigan: We’ve got contact with them. Well some of them, anyway. They’ve got to be on your friends list.

Cheen: They say people go missing on the motorway. Some cars just vanish, never to be seen again. ‘Cause there’s something living down there, in the smoke. Something huge and hungry. And if you get lost on the road, it’s waiting for you.
Milo (Travis Oliver): Like I said, air vents. Going down to the next layer.
Martha: Except look out there. Does it look like the air vents are working?
Milo: No. {they hear the noises from below}
Martha: So what’s that then?

The Doctor: Mrs. Cassini, this is The Doctor. Tell me, how long have you been driving on the motorway?
Alice Cassini (Bridget Turner) on the radio: Oh we were amongst the first. It’s been twenty-three years now.
The Doctor: And in all that time have you ever seen a police car?
May Cassini (Georgine Anderson): I’m… not sure.
The Doctor: Look at your notes. Any police?
May: Not as such.
The Doctor: Or an ambulance? Rescue service? Anything official, ever?
May: I can’t keep a note of everything!
The Doctor: What if there’s no one out there?
Brannigan: Stop it! The Cassinis were doing you a favor.
The Doctor: Someone’s got to ask. ‘Cause you might not talk about it, but it’s there. In your eyes. What if the traffic jam never stops?
Brannigan: There’s a whole city above us. The mighty city-state of New New York. They wouldn’t just leave us.
The Doctor: In that case where are they? Hm? What if there no help coming. Not ever. What if there’s nothing? Just the motorway? With the cars going ’round and ’round and ’round, never stopping. Forever!
Valerie: Shut up! Just shut up!

Sally Calypso: This is Sally Calypso. And it’s that time again. The sun is blazing high in the sky over the New Atlantic. The perfect setting for the daily contemplation.
Brannigan: You think you know us so well, Doctor. We’re not abandoned. Not while we have each other.
Sally Calypso: This is for all of you out there on the roads. We’re so sorry. Drive safe.

The Doctor: If you won’t take me I’ll go down on my own.
Brannigan: What do you think you’re doing?
The Doctor: Finding my own way. I usually do. {to himself} Here we go. {to Valerie} Look after this. I love that coat. Janis Joplin gave me that coat.

Valerie: But you can’t jump!
The Doctor: If it’s any consolation, Valerie, right now I’m having kittens.
Brannigan: This Martha, she must mean an awful lot to you.
The Doctor: Hardly know her. I was too busy showing off. And I lied to her. Couldn’t help it, just lied.

Valerie: He’s completely insane.
Brannigan: That. And a bit magnificent.

The Doctor: Have you got any water?
Businessman (Nicholas Boulton): Certainly. Never let it be said I’ve lost my manners.

Brannigan: Just what we need. Pirates!
Valerie: I’m calling the police!
Novice Hame: The Doctor! Where is he?

Cheen: How did you think of that?
Martha: I saw it in a film. They used to do it in submarines. The trouble is, I can’t remember what they did next.
Milo: Well you better think of something, because we’ve lost the air-con. If we don’t switch the engines back on we won’t be able to breathe.
Martha: How long have we got?
Milo: Eight minutes, maximum.

The Doctor: The Macra used to be the scourge of this galaxy. Gas, they fed off the gas. The filthier the better. They built up a small empire using humans as slaves and mining gas for food.
Businessman: They don’t exactly look like empire-builders to me.
The Doctor: Well, that was billions of years ago. Billions. They must have devolved down the years, now they’re just beasts.
The Doctor: But they’re still hungry and my friend’s down there.

Novice Hame: I’m sorry, but the situation is even worse than you can imagine.

The Doctor: So the two of you stayed here, on your own for all these years.
Novice Hame: We had no choice.
The Doctor: Yes, you did.
The Face of Boe: Save them, Doctor. Save them.

Martha: There’s always The Doctor. That friend of mine. He might think of something.
Milo: Martha, no one’s coming.
Cheen: He looked kind of nice.
Martha: He’s a bit more than that.
Cheen: Are you and him?
Martha: Sometimes I think he likes me, but sometimes I think he just needs someone with him.
Cheen: I never even asked. Where’s home?
Martha: It’s a long way away. I didn’t really think. I just followed the Doctor and… they don’t even know where I am—my mom and dad. If I died here they’d never know.
Milo: So who is he, then? This doctor.
Martha: I don’t know. Well, not really. There’s so much he never says.
Cheen: But that means that the only hope right now is a complete stranger? Well that’s no use!
Martha: It is though. Because you haven’t seen the things he can do. Honestly. Just trust me, both of you. You’ve got your faith. You’ve got your songs and your hymns. And I’ve got the Doctor.

The Doctor: Car 465-diamond-6! It still registers! That’s Martha. I knew she was good.

Brannigan: By all the cats in the Kingdom.
Valerie: What is it? What is it? It’s the sun! Oh Brannigan! Children, it’s the sunlight.
The Doctor: Sorry, no Sally Calypso. She was just a hologram. My name’s The Doctor—
Brannigan: He’s a magician.
The Doctor: —and this is an order: everyone drive up. Now. I’ve opened the roof of the motorway. Come on. Throttle those engines and drive up. All of you, the whole undercity. Drive up!

Brannigan: Didn’t I tell you, Doctor! You’re not bad, sir! Not bad at all!
The Doctor: You keep driving, Brannigan. All the way up. ‘Cause it’s here, just waiting for you. The city of New New York and it’s yours. And don’t forget, I want that coat back.
Brannigan: I reckon that’s a fair bargain, sir.

The Doctor: Alright. You staying?
Martha: Until you talk to me properly, yes. He said “last of your kind.” What does that mean?
The Doctor: It really doesn’t matter.
Martha: You don’t talk! You never say. Why not? {they hear singing} It’s the city. They’re singing.

The Doctor: I lied to you. ‘Cause I liked it. I could pretend, just for a bit, I could imagine they were still alive underneath the burnt orange sky. I’m not just a TIme Lord. I’m the last of the Time Lords. The Face of Boe was wrong. There’s no one else.
Martha: What happened?
The Doctor: There was a war—a Time War. The Last Great Time War. My people fought a race called the Daleks. For the sake of all creation. And they lost. We lost. Everyone lost. They’re all gone now. My family. My friends. Even that sky. Ah, you should have seen it, that old planet. The second sun would rise in the south and the mountains would shine. The leaves on the trees were silver. When they caught the light every morning it looked like a forest on fire.