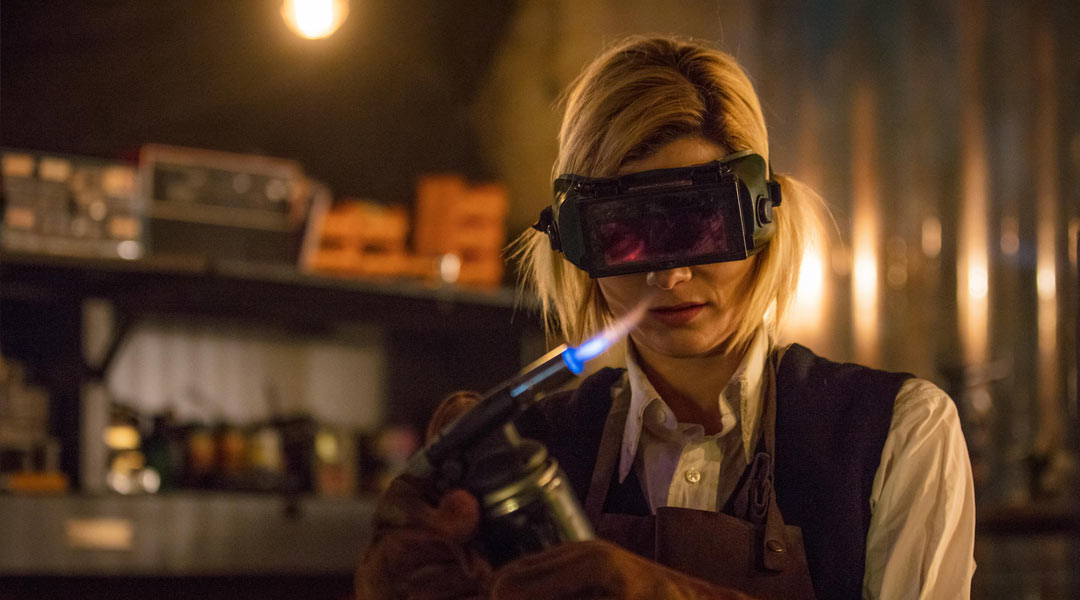 Ryan Sinclair (Tosin Cole): So today I want to talk about the greatest woman I ever met. Smart, funny, caring, special. Proper special. Uh, where do I start? Okay. I’ve mentioned this on here before. I’m pretty much not an idiot. I’m actually a capable guy considering. But I’m 19. And because of the thing I’ve told you about this before, I can’t yet ride a bike.

Yasmin Khan (Mandip Gill): Can I suggest a simple solution? You pay for her cracked window, you pay for her scratched door, and we all agree that parking around here is a nightmare. But that grownups really shouldn’t need to call the police to sort it out for them.

The Doctor to the tentacle-y thing: What are you? Oh, okay. Don’t like questions, more the private type. I get that.

The Doctor: Fat lot of use you two were.
Yasmin: Hold on there, madam. I need you to do as I say. This could be a potential crime scene.
The Doctor: Why are you calling me “madam”?
Yasmin: Because… you’re a woman.
The Doctor: Am I? Does it suit me?
Yasmin: What?
The Doctor: Oh yeah! I remember. Sorry. Half an hour ago I was a white-haired Scotsman.

Yasmin: Can I have your name, please?
The Doctor: When I can remember it.
Yasmin: You don’t know your own name?
The Doctor: Of course I know it. I just can’t remember it, it’s right there on the tip of my… What’s that?
Ryan: Tongue?
The Doctor: Tongue! Smart boy. Biology.

The Doctor: Are you a doctor, Ryan?
Ryan: No.
The Doctor: Shame. I’m looking for a doctor.

Ryan: Was it an alien? Because it looked like an alien to me.
Yaz: Come on!
The Doctor: What, you think he’s wrong?

The Doctor: Right then, troops. No, not troops. Team. Gang. Fam? I’m distracting myself.
Grace: You came crashing through that roof.
The Doctor: I was thrown out of my TARDIS. Oh! I’ve lost my TARDIS. It was exploding and then it dematerialized. Don’t panic. Not the end of the world. Well it could be the end of the world, but one thing at a time.
Graham O’Brien (Bradley Walsh): Are we supposed to understand anything you’re saying?
Ryan: She things that thing is an alien.
Graham: Don’t be daft. There’s no such thing as an alien. Anyway even if there was, they ain’t gonna be on a train in Sheffield.
The Doctor: Why not? I’m alien and I’m here.

The Doctor: Obvious question, but has anyone noticed anything else out of the ordinary tonight? Ryan slowly raises his hand

The Doctor: And you say you just found it there, this thing?
Ryan: Yeah, pretty much. I took pictures.
The Doctor: Good lad. looking. That’s exciting. No. Not exciting. What do I mean? Worrying. Fast as you can, Yaz.

Grace: That’s a big fall you had, love. Should get you checked out at A & E.
The Doctor: No no. I never go anywhere that’s just initials.

The Doctor: Show me your collarbones. Oh, you’ve all got them.
Ryan: So have you.
The Doctor: Yeah. I have. Okay. Really sorry. Not good news. DNA bombs. Micro-implants which code to your DNA. On detonation they destruct the foundation of your genetic code, melting your DNA. Fast and nasty and outlawed in every civilized galaxy.
Ryan: How did we get them?
Graham: Never mind that, are they going to go off?
The Doctor: Quiet, I’m trying to think. It’s difficult. Not yet who I am. Brain and body still rebooting, reformatting. sees Ryan’s phone. Oh! Reformatting!
…
The Doctor: I reformatted your phone.
Ryan: No, all my stuff’s on there!
The Doctor: Not anymore!

The Doctor: Lost it! He’s fast. I’m slower because of all this fizzing inside.

The Doctor: Why here? Why tonight?
Ryan: Actually that might have been me.

Ryan: You all would have done the same.
Graham: I wouldn’t!
The Doctor: I would’ve.

The Doctor: Right now, I’m a stranger to myself. There’s echoes of who I was and a sort of call towards who I am. And I have to hold my nerve and trust all these new instincts. Shape myself towards them. I’ll be fine. In the end. Hopefully. I have to be. Because you guys need help. ‘Cause there’s one thing I’m certain of, when people need help, I never refuse. Right. This is going to be fun!

Ryan: Did you just make that?
The Doctor: Sonic screwdriver. Well I say screwdriver but it’s a bit more multipurpose than that. Scanner. Diagnostics. Tin opener. More of a… sonic Swiss Army knife. Only without the knife. Only idiots carry knives.

Stenza Warrior: You’re interfering in things you don’t understand.
The Doctor: Yeah well, we all need a hobby.

The Doctor: Why the teeth? Bad enough you kill, why take a tooth from the victim?
Stenza Warrior: A Stenza warrior wears his conquests.

The Doctor: Earth is not a hunting ground.
Tim Shaw: Access was granted.
Ryan: No it wasn’t. It was a misunderstanding. Access revoked. As of now. By me.

The Doctor: Just to pick up on one thing, don’t mind, dear. You said the rules were: no weapons, no assistance.
Tim Shaw: Correct.
The Doctor: How did you kill them? What cause the ice burns?
Tim Shaw: We Stenza live at temperatures far below this planet. One touch of my cold skin will kill a human.
The Doctor: So this superpower gathering coil right here, you’re not meant to have it, are you?
Tim Shaw: The creature is irrelevant.
The Doctor: I don’t think it is. I think you smuggled it ahead of you. I think it located the randomly designated human for you. I think you broke the rules. Some leader you’re gonna make. Tim Shaw is a big blue cheat.
[…]
The Doctor: No! Short range teleport! Double cheat!

The Doctor: Ryan, Yaz. How are you with machinery? And hats?

The Doctor: All back down for a cuppa and a fried egg sandwich. I’m really craving a fried sandwich. Simple, no?
Yaz: Not really.
The Doctor: All right. It’s a work in progress, but so is life. It’ll be fine.

The Doctor: When I said step, obviously I meant jump.
Karl Wright (Johnny Dixon): I don’t know, I’m not great with heights.
The Doctor: What?
Karl: It’s my dad’s company.

The Doctor: These legs definitely used to be longer.

The Doctor: Let him go. Or I destroy— this. starts searching pockets. Oh. I really need a new coat. This. The recall from the pod you travelled in. I took it out. Without this you can’t get home. Yeah see. Now you’re worried.

Grace: Is it wrong to be enjoying this?
Graham: Yes!

The Doctor: Poor Tim Shaw. The wannabe leader who has to cheat because he knows he’s unworthy. See that’s why I know you won’t detonate. Although you could prove me wrong, ’cause we’re all capable of the most incredible change. We can evolve while still staying true to who we are. We can honor who we’ve been and choose who we want to be next. Now’s your chance. How ’bout it?
Tim Shaw: Who are you?
The Doctor: I’m glad you asked that again. Bit of adrenaline, dash of outrage, and a hint of panic knitted my brain back together. I know exactly who I am. I’m The Doctor. Sorting out fair play across the universe. Now please. Get off this planet while you still have a choice.

Grace: Put a bomb in me, would ya!

Grace: Don’t be cross with me.
Graham: I’m not cross, baby. I’m not cross.
Grace: Promise me you won’t be scared.
Graham: What do you mean?
Grace: Without me.

Ryan: So today I want to talk about the greatest woman I ever met. Smart, funny, caring. Proper special. My Nan. Because, uh, she died. First me mum six years ago and now me nan. It’s like the best people get taken first. I had a lot to learn from her and I were looking forward to that. She died like she lived—trying to help other people. I love you, Nan. And tomorrow I’m going out there for you.

Yaz: Have you got family?
The Doctor: No. Lost them a long time ago.
Ryan: How’d you cope with that?
The Doctor: I carry them with me. What they would have thought and said and done make them a part of who I am. So even though they’re gone from the world they’re never gone from me.
That’s the sort of thing Grace would have said.

Yaz: Doctor. Can I just say? You really need to get out of those clothes. Ryan laughs.
The Doctor: Right. Yeah. It’s been a long time since I bought women’s clothes.

The Doctor: Okay you three. I’m almost gonna miss you.

The Doctor: Oh, deep breath. the three breathe deeply. Not you lot, me.