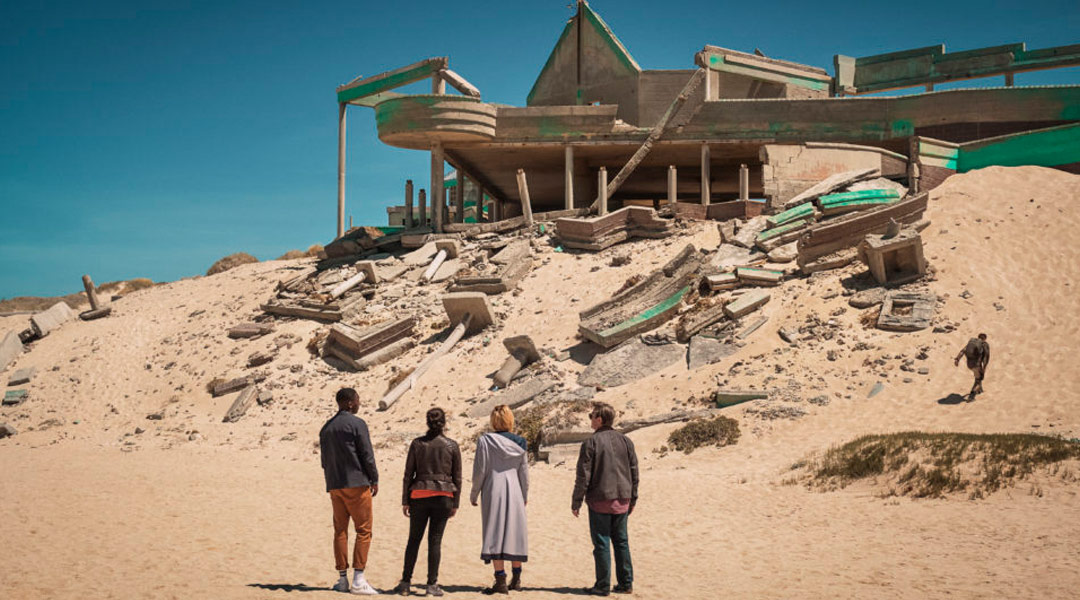 Graham O’Brien (Bradley Walsh): Breathe slowly, son. Well done. That’s it. Well done.
Ryan Sinclair (Tosin Cole): I’m alive. We are alive, right?
Graham: As far as I can tell, yeah.
Ryan: Where are we?
Graham: On a spaceship.
Angstrom (Susan Lynch): My spaceship!
Ryan: Who’s that?
Graham: She says she’s the pilot.
Ryan: We were in space. No, wait. We were in that warehouse. And then we were in space. How were we in space?!
Graham: I’ve got no idea.
Ryan: And why are we not in space now?
Angstrom: I scooped you.

Angstrom: Landing ahead. Lock yourselves back in.
Graham:  We’re not doing anything unless you turn this thing around and go and look for our friends.
Angstrom: There’d be no point. If they were still there they’d be dead.

Epzo (Shaun Dooley): How can a planet be in the wrong place? It should have been back there where I scooped you up. We should be in its gravity belt by now.
The Doctor (Jodie Whittaker): Well we’re not.
Epzo: I can see that.
Yasmin Khan (Mandip Gill): Hi. I can smell burning.
Epzo: Hey, you’re right. She is still alive.

The Doctor: There! The planet’s there.
Epzo: How can it be there?
The Doctor: Does it even have a name?
Epzo: Only a symbol. Or a warning. Closest word is… desolation.

Yaz: I’m on a spaceship. Okay.

Epzo: Listen to me, nobody is jettisoning anything. This is the Cerebos. All right? She’s the envy of millions.
The Doctor: Really?
Epzo: Yes. People have written songs about her.
The Doctor: They’ll be writing operas about our pointless deaths if we don’t take drastic action right now!
Yaz: We’re about to die?
The Doctor: Oh. Sorry, Yaz. I forgot you were there. All going to be fine.

Yaz: What’s actually happening?
The Doctor: No need to panic, Yaz. We’re just going to blow the back off this spaceship.

Ryan: We’re on an alien planet, Graham.
Graham: Well the three suns in the sky are a bit of a giveaway.

The Doctor: Right, quick update. I made a terrible mistake, we shouldn’t be here. I’m gonna fix it and get you guys home. I promise. Soon as I figure out where we are.
Graham: How’re you gonna do that?
The Doctor: Not sure. I’m treating it as a chance to surprise myself. Oh! By the way, welcome to what I presume is your first alien planet. Don’t touch anything.

The Doctor: Oh. I forgot I put stuff in these pockets.

Graham: All this sand is getting in my eyes something rotten.
The Doctor: Wanna borrow my shades?
Graham: Oh. Ta.
The Doctor: Like an old pair of mine. I say mine. Can’t remember who I borrowed them off, now. It was either Audrey Hepburn or Pythagoras.
Graham: Eh? Pythagoras never wore shades.
The Doctor: Obviously never saw him with a hangover.

Graham: Can people—and things—stop putting stuff inside me without my permission!

The Doctor: I love a good hologram. I was a hologram once. For three weeks. The gossip I picked up.

The Doctor: What are you, projection reality or AI interface? Because if you’re interface {checking} those are excellent nose hairs.
Ilin (Art Malik) ignoring her: Who are these people?
Angstrom: Bonuses.
Ilin: No.
Epzo: What?
Ilin: I told you. Bonuses and snaketraps are over.

The Doctor: We were loads of solar systems away. I was trying to find my ship. I got a fix on it here… and then it all went quite badly wrong, actually. These three have been very good not going on about it.

Ilin: The final challenge is to cross the terrain, survive the planet, make your way to the other side of the mountains, and the first one to get to the site marked as the Ghost Monument will be crowned the winner and transported off this planet. Loser will not.

Ilin: …don’t drink the water. In fact don’t even touch the water. This entire planet has been made cruel.
The Doctor: Made cruel how? And by who?

Looking at the projection of the Ghost Monument
Graham: That’s an old police box.
Yaz: Yeah, like the one on Surrey Street. Only the one in town is green. This don’t make any sense.
The Doctor: Makes sense to me.

Ilin: Well I’m sorry I can’t be of any more help.
The Doctor: I don’t think you are.
Ilin: You’re right.

The Doctor: Now I know this is a bit of a shock.
Graham: Well you could say that. I mean we have been dumped in space. We’ve got spaceships crashing all around us. Now we are marooned on a planet that everyone else is racing to get away from.
The Doctor: All right, anyone can focus on the negatives.
Graham: Well what are the positives?
The Doctor: What he called the Ghost monument, that’s my ship. It’s here!
Graham: What, the old police box?
Ryan: Didn’t look all that.
The Doctor: It’s very all that, thank you very much.

The Doctor: I’m really good in a tight spot. At least I have been historically. I’m sure I still am. If we stick together—if you trust me—we can get out of this. Right. Let’s get a shift on.

Graham: She’s our best hope. Or only option, depending on your politics.

Epzo: Maybe I don’t play by the rules.
The Doctor: Did you practice those lines in the mirror?

Graham: Are we ever going to talk about your nan? I mean just ’cause all this is going on don’t mean to say it didn’t happen. See I cope, myself, with asking the question, “If Grace was here, what would she say?”
Ryan: What’d you reckon?
Graham: Well right now she’d be going, “What’s the matter with you? You’re on another planet. How cool is that!”

Ryan: You talk about this stuff way too much.
Graham: And you don’t talk about it enough.

Angstrom: If I win, I find them, rescue them. If they’re alive to be rescued. And whatever chance I have here, it’s a lot better than my chance back home.

The Doctor: First thing we have to do is make it through those ruins safely. ‘Cause these readings are all over the place and I don’t know why.

Yaz: Got anything there, Doctor?
The Doctor: Information. Oh that’s bad. They’re sniper bots. We just walked into the middle of the shooting range. Everything within the perimeter is target practice.
Graham: Which would explain all the targets in here. And looking on the negative side, they’re human-shaped targets.

The Doctor: Put the gun down, Ryan.
Ryan: What’s your better idea?
The Doctor: Outthink them.
Graham: You can’t outthink bullets.
The Doctor: Been doing it all my life.

The Doctor: Made it worse?
Ryan: Just a little bit, yeah.
The Doctor: Now do you see why I don’t like guns?

The Doctor: I want answers to this planet and I think they’re down there.
Graham: You sure about that?
The Doctor: Nope. Come on. {heads down the tunnel}
Ryan: Why is it always ladders?

The Doctor: How’s the injury.
Epzo: It’s painful.
The Doctor: Hope it’s made you reconsider your entire philosophy.
Epzo: No.

The Doctor: [F]ix your wound, take one of your heroic naps, and we’ll wake you when we leave. If you’re lucky.
Epzo: Fine.

The Doctor: “We are scientists. Abducted, tortured, and made to work while our families are held hostage. We are forced to find new ways of destruction. Poisons. Weapons. Creatures. We gave them our minds, and they made us the creators of death. This planet has been left scorched and barren from our work. The atmosphere and water are toxic. Killing machines and creatures inhabit every corner. We had no choice but to obey… the Stenza. We’re trying to destroy all of our work before they use it against others. There’s two words below that. “They’re coming.” That’s how it ends.
Graham: The Stenza. That, that’s the thing we stopped in Sheffield, right?
Angstrom: You know the Stenza too?
Graham: My wife died because of them.
Angstrom: Mine too. I’m sorry. They took our planet, sent us into hiding. Cleansed millions of us.

Remnants: You lead, but you’re scared too. For yourself and for others.
The Doctor: Yeah, well. Who isn’t.
Remnants: Afraid of your own newness. We see deeper, though. Further back. The Timeless Child.
The Doctor: What did you just say?
Remnants: She doesn’t know.
The Doctor: What are you talking about? What can you see?
Remnants: We see what’s hidden, even from yourself. The outcast, abandoned and unknown.
The Doctor: Get out of my head!

The Doctor: I’m sorry. I’ve failed you. I promised you, and I let you down.
Ryan: We can wait, can’t we?
Yaz: Yeah. We’ve got each other.
The Doctor: No, we’ll be dead within one rotation.
Graham: Who says so? We’ve come this far, ain’t we? Who says we’ve given up? Any of us? Really? Even you, Doc? No. Come on. We ain’t having that, are we?
Yaz: Nope.
Graham: Yeah.
Ryan: No.
Yaz: Can you hear that noise?

The Doctor: Come to Daddy. I mean Mummy. I mean… I really need you right now! {the TARDIS stabilizes} My beautiful ghost monument.

The Doctor: Hello, you. I’ve missed you. {seeing the new sign} Oh! You’ve done yourself up. Very nice. Lost my key. Sorry. {the door opens}

Graham: But it’s an old police box!
The Doctor: Sort of. Not really.
Ryan: You expect us all to fit inside that?
The Doctor: Yep.
Yaz: At the same time?
The Doctor: Wanna try?
Ryan: Okay.
The Doctor: Oh. Word of warning. I left it in a bit of a mess.

The Doctor: Oh. You’ve redecorated. {she explores the console room} I really like it.

The Doctor: This is my TARDIS.

Graham: How d’you fit all this stuff inside a police box?
The Doctor: Dimensional engineering.
Yaz: You can’t engineer dimensions.
The Doctor: Maybe you can’t.
Ryan: Can I press any of the—
The Doctor: No.
Graham: It’s a space ship?
The Doctor: And a time ship.
Ryan: Get out.
The Doctor: Seriously.
Ryan: This is proper awesome.