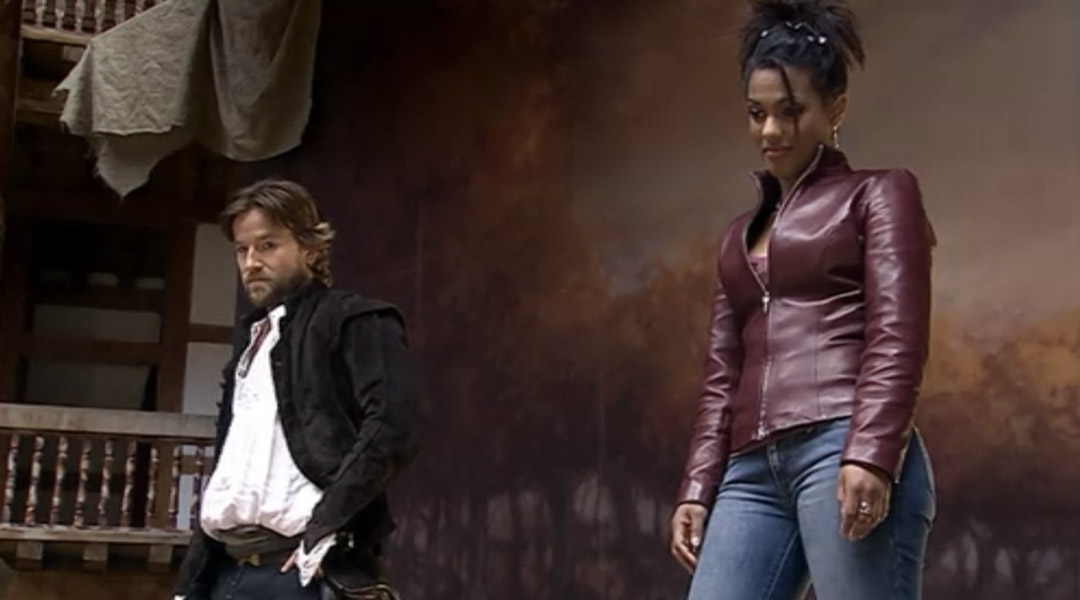 Lilith (Christina Cole): Soon, at the hour of woven words, we shall rise again. And this fleeting earth will perish!

Martha: But how do you travel in time? And what makes it go?
The Doctor: Oh, let’s take the fun and the mystery out of everything! Martha, you don’t want to know. It just does. Hold on!
Martha: Blimey, did you have to pass a test to fly this thing?
The Doctor: Yes, and I failed it.

Martha: But are we safe? I mean, can we move around and stuff?
The Doctor: Of course we can. Why do you ask?
Martha: It’s like in the films. You step on a butterfly, you change the future of the human race.
The Doctor: Tell you what then, don’t step on any butterflies. What have butterflies ever done to you?

The Doctor: Elizabethan England, not so different from your time. Look over there. They’ve got recycling… water cooler moment… global warming.

The Doctor: When you get home, you can tell everyone you met Shakespeare.
Martha: Then I could get sectioned.

Martha: And those are men dressed as women, yeah?
The Doctor: London never changes.

Martha: He’s a bit different from his portraits.

Martha: I’m not an expert, but I’ve never heard of Love’s Labours Won.
The Doctor: Exactly. The lost play. It doesn’t exist. I mean rumors, it’s mentioned in his plays but it never turns up. And no one knows why.

Shakespeare: Sweet lady. Such unusual clothes. So fitted.
Martha: Um. Verily. Forsooth. Egads.
The Doctor: No. No. No. Don’t do that.

Martha: And why are you telling them that?
The Doctor: This lot have still got one foot in the Dark Ages. If I tell them the truth they’ll panic and think it was witchcraft.
Martha: Okay, what was it then?
The Doctor: Witchcraft.

Shakespeare: Poor Linley. So many strange events. Not least of all this land of Freedonia, where a woman can be a doctor.
Martha: Where a woman can do what she likes.
Shakespeare: And you, Sir Doctor. How can a man so young have eyes so old?
The Doctor: I do a lot of reading.
Shakespeare: A trite reply, yeah? That’s what I do. And you, you look at him like you’re surprised he exists. He’s as much of a puzzle to you as he is to me.

Shakespeare: I must a’work. I have a play to complete. I’ll get my answers tomorrow, Doctor. And I’ll discover more about you and why this constant performance of yours.
The Doctor: All the world’s a stage.
Shakespeare: Hm. I might use that. Goodnight, Doctor.
The Doctor: Nighty night, Shakespeare.

Martha: So magic and stuff. That’s a surprise. It’s all a bit Harry Potter.
The Doctor: Wait ’til you read book seven. Woah. I cried.

The Doctor: There’s something I’m missing, Martha. Something really close. Staring me right in the face and I can’t see it. Rose would know. A friend of mine, Rose. Right now she’d say exactly the right thing. Still. Can’t be helped. You’re a novice, never mind. Take you back home tomorrow.
Martha: Great.

Martha: Doctor.
The Doctor: What did you see?
Martha: A witch.

Shakespeare: Oh, sweet Dolly Bailey. She sat out three bouts of the plague in this place. We all ran like rats. But what could have scared her so? She had such enoromous spirit.
The Doctor: Rage rage against the dying of the light.
Shakespeare: I might use that.
The Doctor: You can’t. It’s someone else’s.

The Doctor: Fourteen. Why does that ring a bell? Fourteen…
Martha: There’s fourteen lines in a sonnet.
The Doctor: So there is. Good point. Words and shapes following the same design. Fourteen lines, fourteen sides, fourteen facets… Oh my head! Tetradecagon. Think think think. Words, letters, numbers, lines!
Shakespeare: This is just the theatre!
The Doctor: Oh yeah, but the theatre’s magic, isn’t it? You should know. Stand on this stage, say the right words with the right emphasis at the right time. Oh, you can make men weep.

Shakespeare: You never know, the Queen might turn up. As if. She never does.

Martha: Woah, nelly! I know for a fact you’ve got a wife in country.
Shakespeare: But Martha, this is town.
The Doctor: Come on! We can have a good flirt later.
Shakespeare: Is that a promise, Doctor?
The Doctor: Oh. Fifty-seven academics just punched the air.

Actor: Love’s Labours Won. I don’t think much of sequels. They’re never as good as the original.

Shakespeare: Made me question everything. The futility of this fleeting existence. “To be or not to be.” Oo. That’s quite good.
The Doctor: You should write that down.
Shakespeare: Maybe not. Bit pretentious?
The Doctor: Eh.

Martha: Let us out! Let us out!
The Doctor: That’s not going to work. The whole building’s shouting that.
Doomfinger (Amanda Lawrence): Who would die first? Hm?
The Doctor: Well, if you’re looking for volunteers.
Martha: No, don’t!
Shakespeare: Doctor, can you stop her?
Doomfinger: No mortal has power over me.
The Doctor: No, but there’s a power in words. If I can find the right one, if I can just know you.
Doomfinger: None on Earth has knowledge of us.
The Doctor: Then it’s a good thing I’m here.

Martha: What did you do?
The Doctor: I named her. The power of a name. That’s old magick.
Martha: But there’s no such thing as magic.
The Doctor: Well, it’s just a different sort of science. You lot, you chose mathematics. Given the right string numbers, the right equation, you can split the atom. Carrionites use words instead.
Shakespeare: Use them for what?
The Doctor: The end of the world.

Martha: Hold on though, what were you doing last night when the Carrionite was in the room?
Shakespeare: Finishing the play.
The Doctor: What happens on the last page?
Shakespeare: The boys get the girls, they have a bit of a dance. It’s all as funny and thought-provoking as usual. Except those last few lines. Funny thing is, I don’t actually remember writing them.
The Doctor: That’s it! They used you. They gave yo uthe final words, like a spell, like a code. Love’s Labours Won. It’s a weapon! The right combination of words spoken in the right place with the shape of the Globe is an energy converter! The play’s the thing! And yes, you can have that.

Shakespeare: All these years I’ve been the cleverest man around. Next to you, I know nothing.
Martha: Well don’t complain.
Shakespeare: I’m not. It’s marvelous. Good luck, Doctor.
The Doctor: Good luck, Shakespeare. Once more unto the breach!
Shakespeare: I like that! Wait a minute, that’s one of mine.

Martha: The thing is though, am I missing something here? The world didn’t end in 1599. It just didn’t. Look at me, I’m living proof.
The Doctor: Oh, how to explain the mechanics of the infinite temporal flux. I know! Back to the Future. It’s like Back to the Future.
Martha: The film?
The Doctor: No, the novelization. Yes the film! Marty McFly goes back and changes history.
Martha: And he starts fading away. Oh my god, am I going to fade?
The Doctor: You and the entire future of the human race. It ends right now in 1599 if we don’t stop it.

The Doctor: I take it we’re expected.
Lilith: Oh I think death has been waiting for you a very long time.

Lilith: It’s curious. Her name has less impact. She’s somehow out of her time. And as for you, Sir Doctor. Fascinating. There is no name. Why would a man hide his title in such despair?

Lilith: The play tonight shall restore the rest. Then the human race shall be purged as pestilence. And from this world we will lead the universe back into the old ways of blood and magick.
The Doctor: Hm. Busy schedule.

The Doctor about the puppet: Now you might call that magic. I’d call it a DNA replication module.

The Doctor: “Stop the play”. I think that was it, yeah. I said, stop the play!
Shakespeare: I hit my head.
The Doctor: Don’t rub it, you’ll go bald.

Martha: They think it was all special effects?
Shakespeare: Your effect is special indeed.
Martha: That’s not your best line.

Martha: What have you done to upset her?
The Doctor: How should I know. I haven’t even met her yet. That’s time travel for you. Still, can’t wait to find out. That’s something to look forward to.