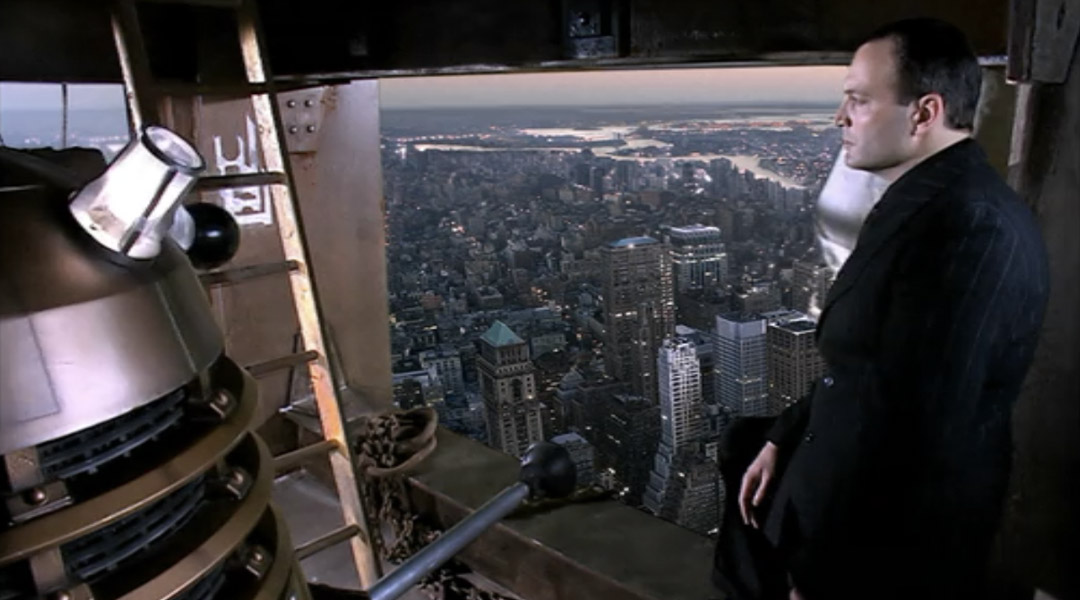 Martha: Where are we?
The Doctor: Ah! Smell that Atlantic breeze. Nice and cold. Lovely. Martha, you’ve met my friend.
Martha: Is that? Oh my god, that’s the Statue of Liberty.
The Doctor: Gateway to the New World. “Give me your tired, your poor, your huddled masses yearning to breathe free.”
Martha: That’s so brilliant. I’ve always wanted to go to New York. I mean the real New York. Not the New New New New New New New…
The Doctor: Well. There’s the genuine article. So good they named it twice. Mind you, it was New Amsterdam originally. Harder to say twice. No wonder it didn’t catch on. New Amsterdam, New Amsterdam.

The Doctor: Herbert Hoover. Thirty-first president of the USA. Came to power about a year ago. Up ’til then New York was a boom town, with the Roaring Twenties. Then—
Martha: The Wall Street Crash. Yeah. What was that, 19290?
The Doctor: Yeah. Whole economy, wiped out overnight. Thousands of people unemployed, all of a sudden the huddled masses doubled in number with nowhere to go. So they ended up here in Central Park.
Martha: What, they actually live in the Park? In the middle of the city?

The Doctor: Ordinary people lost their jobs. Couldn’t pay their rent, lost everything. There are places like this all over America. No one’s helping them. You only come to Hooverville when there’s nowhere else to go.

Solomon (Hugh Quarshie): No stealin’ and no fightin’. You know the rules. Thirteen years ago, I fought in the Great War. Lot of us did. And the only reason we got through was ’cause we stuck together. No matter how bad things get we still act like human beings. That’s all we got.

The Doctor: I suppose that makes you the boss around here.
Solomon: And, ah, who might you be?
Martha: He’s the Doctor, I’m Martha.
Solomon: A doctor? Huh. Well. We got stockbrokers, we got a lawyer. But you’re the first doctor. Neighborhood gets classier by the day.
Martha: How people live here?
Solomon: Any one time? Hundreds. No place else to go. But I will say this about Hooverville. We’re a truly equal society. Black, white, all the same. All starving.

The Doctor: So. Men going missing, is this true?
Solomon: It’s true all right.
The Doctor: But what does “missing’ mean? People must come and go here all the time, it’s not like anyone’s keeping a register.
Solomon: Come on in. {they enter the tent} This is different.
Martha: In what way?
Solomon: Someone takes them. At night. We hear something—someone calls out for help. By the time we get there they’re gone. Like they vanish into thin air.
The Doctor: And you’re sure someone’s taking them.
Solomon: Doctor, when you’ve got next to nothing, you hold on to the little you’ve got. Knife, blanket, you take it with you. You don’t leave bread uneaten, a fire still burning.

Martha: So what about you, Frank? You’re not from around these parts are you?
Frank (Andrew Garfield): Oh you could talk. No, I’m Tennessee born and bred.

Martha: Is it radioactive or something? {she gets a whiff} It’s gone off, whatever it is. {the Doctor picks it up} And you’ve got to pick it up.
The Doctor: Shine your torch through it. Composite organic matter. Martha. Medical opinion.
Martha: Well it’s not human, I know that.
The Doctor: No. It’s not. And I’ll tell you something else, we must be at least a half a mile in and I don’t see any signs of a collapse, do you? So why did Mr. Diagoras send us down here?

Martha: Where are we now? What’s up above?
The Doctor: Well. We’re right underneath Manhattan.

Mr. Diagoras: And here, the crowning glory of the Empire State Building. The mast itself. One thousand four-hundred and seventy-two feet above New York.
Worker: It’s a beautiful thing, sir. And every one of us is proud of it. My wife says it’s like a spire reaching into heaven.
Mr. Diagoras: Except the gates of heaven need a little decoration.

Mr. Diagoras: I don’t care how cold it is, how tired you are. Just get out there and finish the job!

Dalek Thay: The conductor must be complete for our plan to succeed.
Mr. Diagoras: Unemployment is such an incentive. It’ll get done, don’t worry.
Dalek Thay: Daleks have no concept of worry.
Mr. Diagoras: Yeah? Well lucky you.

Mr. Diagoras: Where are we going?
Dalek Thay: You have been summoned by our leader.
Mr. Diagoras: Oh. And about time too.

Martha: Doctor, I think you’d better get back here. Doctor!
The Doctor: Actually, good point.
Martha: They’re following you.
The Doctor: Yep. I noticed that. Thanks. Right then. Martha, Frank, Solomon.
Martha: What?
The Doctor: Um… basically… Run!

Tallulah (Miranda Raison): And I’m not stupid, I know some guys are just pigs, but not my Laszlo. I mean what kind of guy asks you to meet his mom before he vamooses?
The Doctor: Yeah, might just help if you put that down.
Tallulah: Huh? Oh, sure. {she casually tosses it} Oh come on, it’s not real. It’s just a prop. It was either that or a spear.

The Doctor: Just rigging up a crude little DNA scan for this beastie. If I can get a chromosomal reading I can find out where it’s from.
Solomon: How ’bout you, Doctor? Where are you from? I’ve been all over, I’ve never heard anybody talk like you. Just exactly who are you?
The Doctor: Oh, I’m just sort of passing by.
Solomon: I’m not a fool, Doctor.
The Doctor: No. Sorry.

Martha: Bet they’d listen to you. You’re one of the stars.
Tallulah: Oh honey, I got one song and a back-street review and that’s only because Heidi Shicane broke her ankle—which had nothing to do with me whatever anybody says. I can’t afford to make a fuss. If I don’t make this month’s rent then before you know it I’m in Hooverville.
Martha: Okay. I get it.
Tallulah: It’s the Depression sweetie. Your heart might break but the show must go on. ‘Cause if it stops, you starve.

Tallulah: You’re lucky though. You got yourself a forward-thinkin’ guy with that hot potato in the sharp suit.
Martha: He’s not— We’re not… together.
Tallulah: Oh sure you are. I’ve seen the way you look at him. It’s obvious.
Martha: Not to him.
Tallulah: Oh I should have realized. He’s into musical theater, huh? What a waste. Still you gotta live in hope.

Dalek Sec: The pig slaves are primitive. The final experiment is greater by far.
Diagoras: But how does that involve me?
Dalek Sec: We need your flesh. Bring him to me!
Dalek Thay: Halt! This action contradicts the Dalek imperative.
Dalek Caan: Daleks are supreme. Humans are weak.
Dalek Sec: But there are millions of humans and only four of us. If we are supreme, why are we not victorious? The Cult of Skaro was created by the Emperor for this very purpose. To imagine new ways of survival.
Dalek Thay: But we must remain pure.
Dalek Sec: No, Dalek Thay. Our purity has brought us to extinction. We must adapt to survive.

Tallulah: Have you ever been on stage before?
Martha: Oh, a little bit. You know. Shakespeare.
Tallulah: How dull is that! Come and see a real show.

The Doctor: They survive. They always survive while I lose everything.
Tallulah: That metal thing? What was it?
The Doctor: It’s called a Dalek. And it’s not just metal, it’s alive.
Tallulah: You’re kidding me.
The Doctor: Do I look like I’m kidding? In side that shell is a creature born to hate. Whose only thought is to destroy everything and everyone that isn’t a Dalek too. It’ won’t stop until it’s killed every human being alive.

Frank: What are they keeping us here for?
Martha: I don’t know. I’ve got a nasty feeling we’re being kept in the larder.

Martha: I’m so glad to see you.
The Doctor: Yeah, well you can kiss me later. You too Frank, if you want.

Dalek Thay: You will bear witness.
Martha: To what?
Dalek Thay: This is the dawn of a new age.
Martha: What does that mean?
Dalek Thay: We are the only four Daleks in existence. So the species must evolve. A life outside the shell. The children of Skaro must walk again.

Mr. Diagoras/Dalek Sec: I am a human Dalek. I am your future.