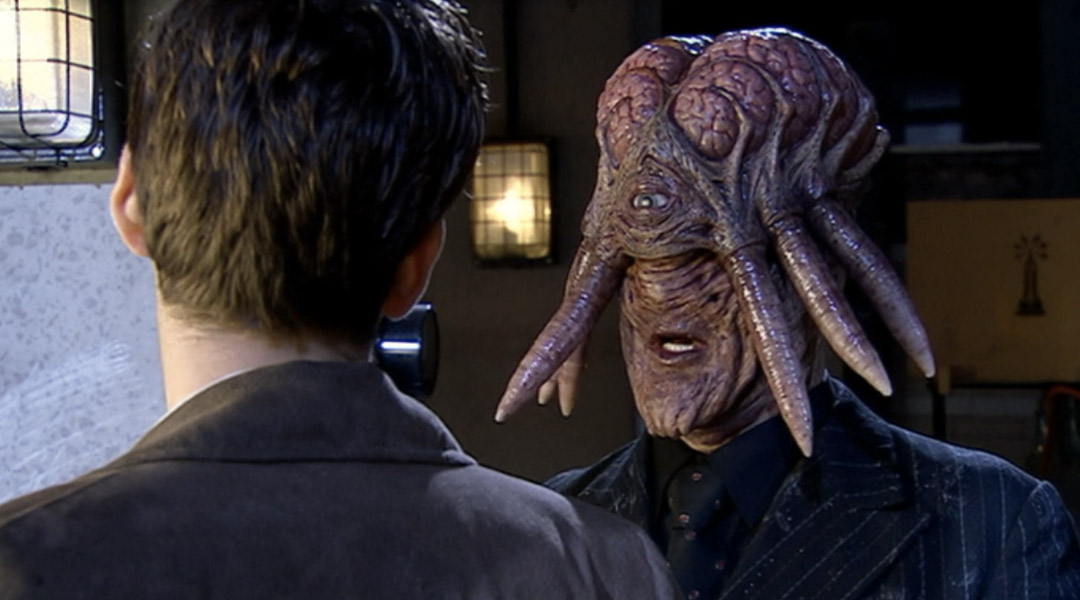 Dalek Sec (Eric Loren): These humans will become like me. Prepare them for hybridization.
Martha: Leave me alone! Don’t you dare! {a radio starts playing}
Dalek Sec: What is that sound?
The Doctor: Ah. Well. Now. That would be me. Hello. Surprise! Boo! Etcetera.
Dalek Sec: Doctor.
Dalek Thay: The enemy of the Daleks!
Dalek Caan: Exterminate!
Dalek Sec: Wait!
The Doctor: Well then, a new form of Dalek. Fascinating. And very clever.
Dalek Sec: The Cult of Skaro escaped your slaughter.
The Doctor: How did you end up in 1930?
Dalek Sec: Emergency temporal shift.
The Doctor: Oh ho. That must have roasted up your power cells, yeah? Time was, four Daleks could have conquered the world. But instead you’re skulking away, hidden in the dark, experimenting. All of which results in you.
Dalek Sec: I am Dalek in human form!

Dalek Thay: Report status.
Dalek Sec: Pain! Pain of the flesh like no Dalek has felt for years!
Dalek Thay: The Doctor has escaped.
Dalek Sec: Then find him!

The Doctor: Daleks are bad enough at any time but right now they’re vulnerable. That makes them more dangerous than ever.

Dalek Sec: Observe humanity. For all their faults they have such courage.

The Doctor: Oh and, can I just say, thank you very much. {palms Martha the psychic paper}

Dalek Thay: You saved the Doctor. Why?
Dalek Sec: He’s a genius and we can use him. The future of the Daleks might well depend on the Doctor.

The Doctor: Yeah yeah yeah. The Empire State Building. We’re right underneath that. I worked that out already, thanks. But what, you’ve hijacked the whole building?
Dalek Sec: We needed an energy conductor.

Dalek Sec: Consider the pure Dalek. Intelligent but emotionless.
The Doctor: Removing the emotions makes you stronger. That’s what your creator thought, all those years ago.
Dalek Sec: He was wrong.
The Doctor: He was what?
Dalek Sec: It makes us lesser than our enemies. We must return to the flesh. And also the heart.
The Doctor: You wouldn’t be the supreme beings anymore.
Dalek Sec: And that is good.
Dalek Caan: That is incorrect.
Dalek Thay: Daleks are supreme.
Dalek Sec: No. Not anymore!
Dalek Thay: But that is our purpose.
Dalek Sec: Then our purpose is wrong! Where has our quest for supremacy led us? To this? Hiding in the sewers on a primitive world. Just four of us left. If we do not change now then we deserve extinction.
The Doctor: So you want to change everything that makes a Dalek a Dalek.
Dalek Sec: If you can help me.

Tallulah (Miranda Raison): New York City. If aliens had to come to Earth, no wonder they came here.

The Doctor: These pig slaves, what happens to them in the grand plan?
Dalek Sec: Nothing. They’re just simple beasts. Their life span is limited. None survive beyond a few weeks.

The Doctor: Laszlo, I can’t undo what they’ve done to you but they won’t do it to anyone else.
Laszlo: Do you trust him?
The Doctor: I know that one man can change the course of history. Right idea in the right place at the right time is all it takes. I’ve got to believe it’s possible.

Tallulah: So tell me, where’d you and him first hook up?
Martha: It was in hospital. Sort of.
Tallulah: Of course! Him being a doctor.
Martha: Actually I’m the doctor. Well, kind of.
Tallulah: You’re a physician? Really?
Martha: I was in training. Still am if I ever get home.

Martha: Doctor!
The Doctor: First floor perfumerie.
Tallulah to Laszlo: I never thought I’d see you again.
Laszlo (Ryan Carnes): No stopping me.
Martha: We worked it out—we know what they’ve done. There’s Dalekanium on the mast. And it’s good to see you too, by the way.
The Doctor: Oh, come here! {hugs Martha as the elevator closes}. See? Never waste time on a hug!

Tallulah: What the hell are you two clowns doing?
Martha: Even if the Doctor stops Dalekanium this place is still gonna get hit. Great big bolt of lightning, electricity all down the building. Connect this to the lift and they get zapped.
Tallulah: Oh my god, that could work.
Frank (Andrew Garfield): Then give us a hand!

The Doctor: Hi. You survived then.
Martha: So did you. Just about. I can’t help noticing, there’s Dalekanium still attached.

The Doctor: Tallulah!
Tallulah: That’s me—three Ls and an H.

The Doctor: Is there another lift?
Martha: We came up in the service elevator.
The Doctor: That’ll do. Allons-y!

Tallulah: Listen, Doctor, I know you got a thing for show tunes but there’s a time and a place.

Martha: What are you doing?
The Doctor: If the Daleks are going to war they’ll want to find their number one enemy. I’m just telling them where I am.

Dalek Jast: You will die, Doctor, at the beginning of a new age.
Dalek Thay: Planet Earth will become New Skaro.
The Doctor: Oh and what a world. With anything just the slightest bit different just ground into the earth. That’s Dalek Sec. Don’t you remember? The cleverest Dalek ever and look what you’ve done to him.

The Doctor: Sorry. I got in the way of the lightning strike. Time Lord DNA got all mixed up. Just that little bit of freedom.

Laszlo: Only two of the Daleks have been destroyed. One of the Dalek masters must still be alive.
The Doctor: Oh yes. In the whole universe, just one.

The Doctor: Now what?
Dalek Caan: You will be exterminated!
The Doctor: Yeah yeah yeah. Just think about it, Dalek—what was your name?
Dalek Caan: Dalek Caan.
The Doctor: Dalek Caan. Your entire species has been wiped out. And now the Cult of Skaro has been eradicated. Leaving only you. Right now you’re facing the only man in the universe who might show you some compassion. ‘Cause I’ve just seen one genocide. I won’t cause another. Caan. Let me help you. What do you say?
Dalek Caan: Emergency temporal shift!

Laszlo: I’m dying, Tallulah.
Tallulah: No, you’re not! Not now after all this. Doctor, can’t you do somethin’?
The Doctor: Oh Tallulah with three Ls and an H. Just you watch me.

Martha: Do you reckon it’s gonna work, those two?
The Doctor: I don’t know. Anywhere else in the Universe I might worry about them, but New York is what this city’s good at. Give me your tired, your poor, your huddled masses. And maybe the odd pig slave-Dalek mutant hybrid too.
Martha: The pig and the showgirl.
The Doctor: The pig and the showgirl.
Martha: Just proves it, I suppose. There’s someone for everyone.
The Doctor: Maybe.