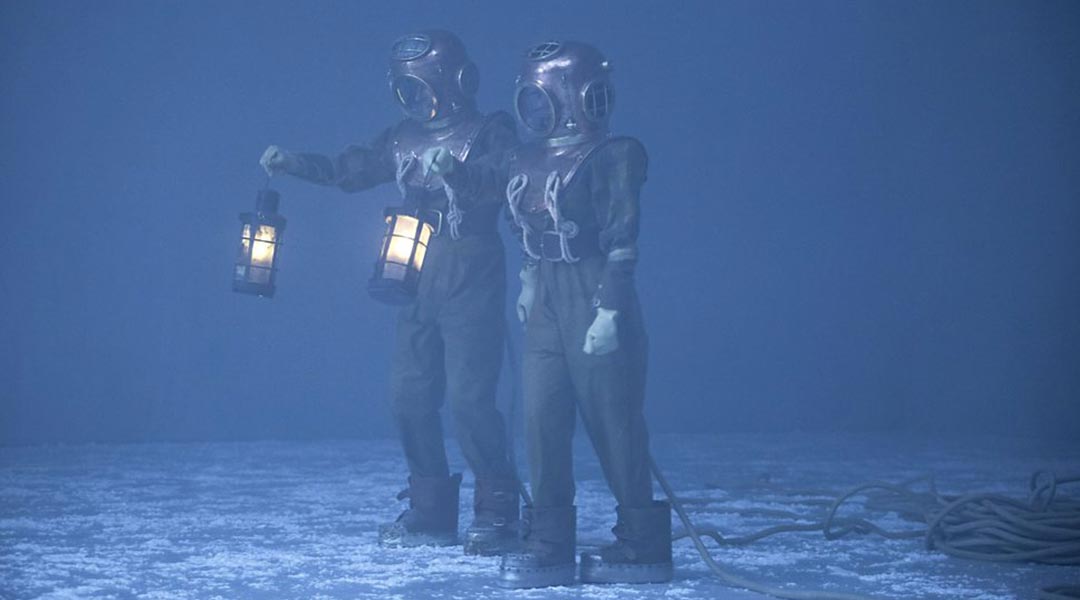 On the subject of an elephant and a frozen Thames
Bill Potts (Pearl Mackie): Okay, I have questions. {The Doctor goes back in the TARDIS}

Bill: You never said we could travel to parallel worlds.
The Doctor (Peter Capaldi): Not a parallel world.
Bill: But that’s London.
The Doctor: Our London. We’re on the Thames. The Last Great Frost Fair. 1814. February the fourth.

Bill: Why aren’t we home? Can’t you steer this thing?
The Doctor: I told you, you don’t steer the TARDIS, you reason with it.
Bill: How?
The Doctor: Unsuccessfully most of the time. She’s a bad girl this one. Always looking for trouble.

The Doctor: Last day before the thaw. Thought I’d better find a more reliable parking spot.
Bill: Wait, you want to go out there?
The Doctor: You don’t?
Bill: It’s 1814. Melanin.
The Doctor: Yes?
Bill: Slavery is still totally a thing.
The Doctor: Yes, so it is.

Bill: So the TARDIS has dresses and likes a bit of trouble? Yeah I think I’m low key enough for that.
The Doctor: Yeah, me too.

Bill: So what are the rules?
The Doctor: Rules?
Bill: Yeah. Travel into the past, there’s gotta be rules. If I step on a butterfly it could send ripples through time that mean I’m not even born in the first place and I could just disappear.
The Doctor: Definitely. I mean, that’s what happened to Pete.
Bill: Pete?
The Doctor: Your friend, Pete. He was standing there a moment ago, but he stepped on a butterfly. Now you don’t even remember him.
Bill: Shut up! I’m being serious.
The Doctor: Yeah, so was Pete.

Bill: Interesting.
The Doctor: What is?
Bill: Regency England. A bit more black than they show in the movies.
The Doctor: So was Jesus. History’s a whitewash.

Bill: Are there side effects to time travel? Like physical symptoms?
The Doctor: Oh yeah. Yeah yeah yeah. Sometimes you see lights under the ice.
Bill: Okay, so… you’ve seen the lights?
The Doctor: Of course.
Bill: Well, why didn’t you say something?
The Doctor: Well. You were enjoying yourself. I assumed we’d get to work eventually.

Bill: How is that a screwdriver?
The Doctor: In a very broad sense!
Bill: Alright. Well how’s it sonic?
The Doctor: It makes a noise.

Bill: Save him.
The Doctor: I can’t. He’s gone.
Bill: Do something. And save him.

Bill: How did you find me?
The Doctor: Get used to that question.
Bill: Oh clever. Yeah, very clever.
The Doctor: What’s wrong?
Bill: What’s wrong? Seriously, what’s wrong? I’ve never seen anyone die before.
The Doctor: A few hours ago we were standing in a garden full of dead people.
Bill: It was different.
The Doctor: How?
Bill: They were dead already.
The Doctor: Morally and practically that is not a useful distinction. Unlearn it.
Bill: Don’t tell me what to think.

Bill: If you care so much, tell me how many people you’ve seen die?
The Doctor: I don’t know.
Bill: Yeah? How many before you lost count?
The Doctor: I care, Bill, but I move on.

The Doctor: I am two thousand years old and I have never had the time for the luxury of outrage.

The Doctor: Someone pays you to promote the fair? Get people onto the ice? Who? Who pays you?

Bill: The Doctor, he helps people. That’s what he does.
Kitty (Asiatu Koroma): And you? What do you do? Apart from shout at him.
Bill: We were fighting. It happens.
Kitty: Are you still fighting now?
Bill: No. I moved on.

The Doctor: I was being all down with the kids there, did you notice?
Bill: Yeah, my hair was cringing.
The Doctor: Awesome.
Bill: Please stop.

The Doctor: Conjecture: there’s something under the Thames and it’s eating people.
Bill: Okay.
The Doctor: Proposal: we need to get a closer look at it.
Bill: Good, yeah.
The Doctor: Plan: let’s get eaten.

Bill: Is this stuff safe?
The Doctor: Potentially.
Bill: Potentially? What does potentially mean?
The Doctor: Safe for the frisson of excitement.
Bill: Right, but we’re not going to be, like, completely defenseless down there though?
The Doctor: No. No no no no. Well yes, but don’t worry about it.
Bill: Why not? What have you got up your sleeve? Oh my god! Have you been holding out on me? Do you have, like, magical alien powers? {he gives her a look} What, was that an impolite question?

Bill: I bought a pie off that guy. Fish pie! {to herself} I ate that pie. I liked that pie.

Bill: Why all the fuss? It’s just mud from the river isn’t it?
The Doctor: Ah, that’s one word for it.

The Doctor: We need to use code, otherwise anyone could walk in here and get you blabbing like a fool.
Overseer (Simon Ludders): Oh that’s a good point, sir.

The Doctor: You keep this up and you won’t be working in this yard for very long.
Overseer: Oh, you think not?
The Doctor: I practically guarantee it.

Overseer: You know what else they say? They say it even burns underwater.
Bill: No shi— !

Sutcliffe (Nicholas Burns): Dr. Disco from the Fairford Club. Obviously one aspires to membership, but to actually be considered for— {sees Bill}. Who, who let this creature in here?! On your feet, girl, in the presence of your betters! {The Doctor coldcocks him}
The Doctor: He’s human. Thirty-one years of age. Low in iron.
Bill: Yeah, that was pretty convincing racism for an extraterrestrial.

Sutcliffe: People know the ice is dangerous, yet they will insist on their festivities. That’s hardly my fault.
The Doctor: Don’t sell yourself short. This is the biggest Frost Fair in decades. And that’s down to you.
Bill: It is?
The Doctor: The man holding me has a tattoo on his left hand.

The Doctor: Human progress isn’t measured by industry. It’s measured by the value you place on a life. An unimportant life. A life without privilege. The boy who died on the river, that boy’s value is your value. That’s what defines a age. That’s what defines a species.
Sutcliffe: What a beautiful speech. The, the rhythm and vocabulary, quite outstanding. It’s enough to move anyone with an ounce of compassion. So it’s really not your day, is it?

Bill: No time for outrage. Never had time for anything else, right?
The Doctor: Don’t be smug. Smug belongs to me.

Bill: Are you really 2,000 years old?
The Doctor: Why?
Bill: I just wanted to know how long it takes before you can make a speech like the one you just made. It’s worth the wait.

The Doctor: Things to do, Bill. Decisions to make. What are we going to do about Tiny?
Bill: Tiny?
The Doctor: The creature. The loch-less monster. The not-ao-little mermaid. Are we just going to leave her there?
Bill: Well we can’t set her free. She could burst up out of the water and eat a hundred people right off of South Bank. She could eat half of London!
The Doctor: She might. It’s a risk. So what do you want to do, Bill?
Bill: We already know the answers. Why are you even asking?
The Doctor: I don’t know the answers. Only idiots know the answers. But if your future is built on the suffering of that creature, what’s your future worth?
Bill: Why is it up to me?
The Doctor: Because it can’t be up to me. Your people. Your planet. I serve at the pleasure of the human race and right now that’s you. Give me an order. Not long ’til noon. I need an order.
Bill: Save her.

Bill: Need help, need it now. You in?
Kitty: Where’s your friend?
Bill: Not here.
Kitty: What’s he doing?
Bill: Not sure, but whatever it is I don’t think we’re going to miss it.

The Doctor: Hopefully she’s smart enough to avoid you lot now.
Bill: Yeah, but if she isn’t? What if we just, like, doomed Greenland?
The Doctor: I’ll check in on Greenland.

Kitty: You gonna tell us what we’re here for?
Bill: A very long time I hope.

Nardole (Matt Lucas): Here you go. Here’s your tea. I put a bit of coffee in it as well just to give it some flavor.

The Doctor: Never underestimate the collective human ability to overlook the inexplicable. Also, the Frost Fair involved a lot of day drinking.

Nardole: Never asked to be reassembled, did I?

Nardole: Knocking. What’s that about? No one’s going to open the door just because you’re knocking! Oh, getting cocky now are you? Why? What do you think you know? What has he told you? Because yeah he may have a little friend now. And yeah, he may be a little bit distracted. But I’ll tell you something, I’m still here! And as long as I’m still here, you are going nowhere!