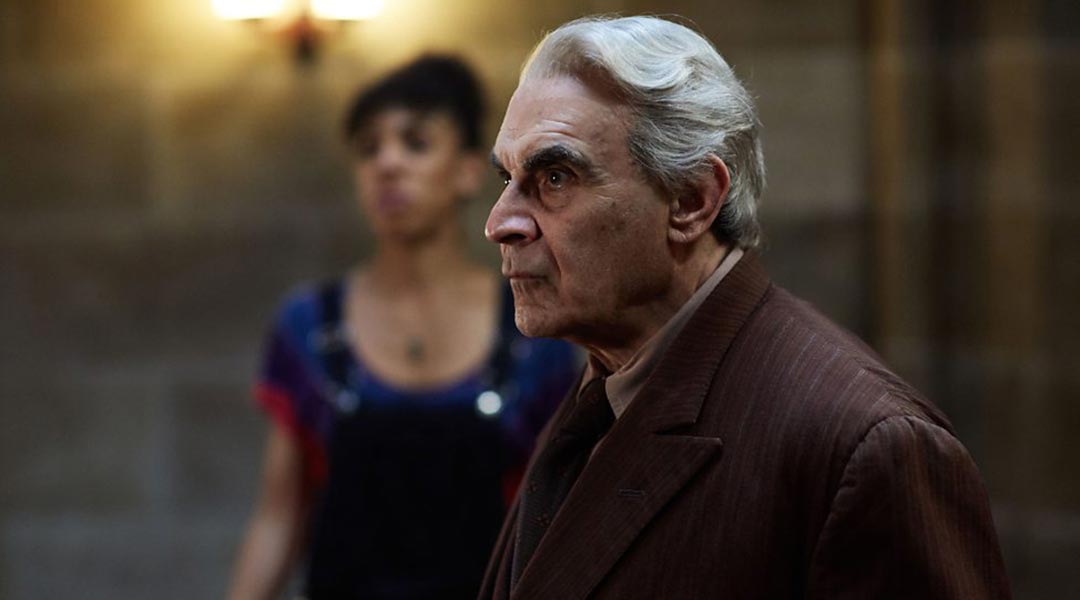 Landlord (David Suchet): Forgive me, but… are you looking for somewhere to live?

Bill Potts (Pearl Mackie) about the TARDIS: You should hire this out. Like a removal service.
The Doctor (Peter Capaldi): Removals? Bill. I’m a Time Lord.
Bill: Time Lord? What’s that, your job?
The Doctor: No it’s my, ah, people. My species.

Bill trying to reassure herself: Stop it. There’s no… living puddles or weird robots. Big fish. It’s just a new house. And people you don’t know. Not scary at all.

Felicity (Alice Hewkin): I always get nervous when there’s no reception. Like something bad’s going to happen.
Shireen (Mandeep Dhillon): We’ll have to get a landline.
Felicity: Landline? What is this, Scotland?
Harry (Colin Ryan): Actually, I was unpacking just now and I heard this… tapping. Little footsteps. Like in the room above.
Felicity: What?
Paul: Maybe it’s a little doll who’s come to life.
Shireen: Or maybe a massive freaky spider!
Bill: Probably just a mouse.
Shireen: Yeah, we know. Just messing with her.
Felicity: Mice. If there’s mice, I’m leaving.

Harry: Paul, go and have a look.
Paul: Why me?
Harry: You’re physically the biggest.
Shireen: And the most expendable.

Bill: Doctor. There might be a few old things, but it just needs updating. It’s not like there’s some massive mystery going on.
The Doctor: Did you hear the trees creaking outside when we were here?
Bill: Yeah. It was the wind.
The Doctor: There wasn’t any wind.

The Doctor: Who’s the Prime Minister?
Landlord: I beg your pardon?
The Doctor: Margaret Thatcher? Harriet Jones? [aw!] Wilson? Eden?
Landlord: I think it’s better to leave your granddaughter here with her friends. They seem respectable. And I’ll keep an eye out of course.

Shireen to the Doctor: I take it back. You’re fine. He’s weird.

Bill: Honestly Doctor. There’s nothing going on. Nothing weird. Nothing alien. Just an old house and a dodgy landlord, which is pretty standard for students. I’ll see you later for more exciting TARDIS action, but basically this is the part of my life that you’re not in.

The Doctor: Maybe before you do you should check on your friend who hasn’t been seen for a day and who has strange music coming out of his room.
Bill: They said he just does that.
The Doctor: Nobody just does anything.
Bill: You’re not leaving, are you?
The Doctor: No.

The Doctor: Your friend will probably be fine. Knock on wood.

The Doctor: This is very interesting.
Harry: The door?
The Doctor: ‘Cause it isn’t..
Harry: Isn’t… ?
The Doctor: A door. Anymore. Try to open it.

Felicity: The shutters!
Harry: What about them?
The Doctor: Closed by themselves. Sealed.
Felicity: So we’re trapped?
The Doctor: Maybe that’s the idea.

Landlord: Music can be pleasant, but a simple repetition like that, it’s merely a distraction from the inevitable. Hope is its own form of cruelty.
Bill: Pavel! No wait, put it back.
Landlord: Oh look. He’s released. Mercy at last. Beautiful, isn’t it? Nature contained. He’s preserved in the walls—in the very fabric of the building forever.
Shireen: So this house is eating people.
Landlord: We must all pay our dues.
Bill: But not you.
Landlord: Correct! I am the exception. For I am your landlord. You came here, you signed the contract. And now… it’s time to pay.

Eliza (Mariah Gale): I haven’t had visitors in such a long time. My name is Eliza.
Bill: I’m Bill. This is Shireen.
Shireen: Hey.
Eliza: I’m pleased to meet you. {seeing the girls discomfort} What?
Bill: You’ve got something… right here.
Shireen: “I’m a celebrity, get me out of here,” yeah?

Bill: Wait. Doctor, that doesn’t make sense.
The Doctor: Can you not interrupt? I’m doing my thing here.
Bill: Why would he pick up insects from the garden and bring them in to see his ill daughter?
The Doctor: Everyone loves insects.
Bill: I don’t.
The Doctor: They’re fascinating.
Bill: Okay. Secondly, he’s not wood. He’s just like us.
The Doctor: He’s… yes.
Bill: So if he’s her father, and she was preserved seventy years ago…
The Doctor: No flies on you, Bill. {to the Landlord} And no bugs in you.

The Doctor: Eliza, he’s your son. Your loving son.
Eliza: My son?
Landlord: Forgive me.

Landlord: If you could save the one who brought you into this world, wouldn’t you? Your silence is a confirmation.

Eliza: All these children you’ve taken. You told me it was necessary. That we had no choice.
Landlord: That’s right, it was. It meant that we could stay together. Don’t you understand? We were happy. I kept our lives a secret. And a secret we must remain.

Bill: Okay. Now’s the time for the plan.
The Doctor: That was it. No plan. Info dump and busk.
Bill: Well start busking.

The Doctor: Right, you lot. Back to the estate agent’s. Better luck next time.

Nardole (Matt Lucas): Well, here he comes.
The Doctor: Are you being cheerful? I’m against cheerful.
Nardole: Bill told me you went on a little adventure. You see?
The Doctor: I see what?
Nardole: Well. You don’t have to go to outer space to find monsters. There’s plenty of things want to kill you right here on earth.

Nardole: A piano? You’ve put a piano in there, why?
The Doctor: Good night.
Nardole: Oh you don’t learn, do you sir?

The Doctor to the door: Hey! Do you want dinner? I’ve got Mexican. Look, I know you miss it all but I’m stuck here too you know. We’re both prisoners. So what do you say. Dinner? And I’ve got a new story for you too. There’s a haunted house and wood lice from space. And lots of young people get eaten. {Pop Goes the Weasel plays on the piano}. I’m coming in.