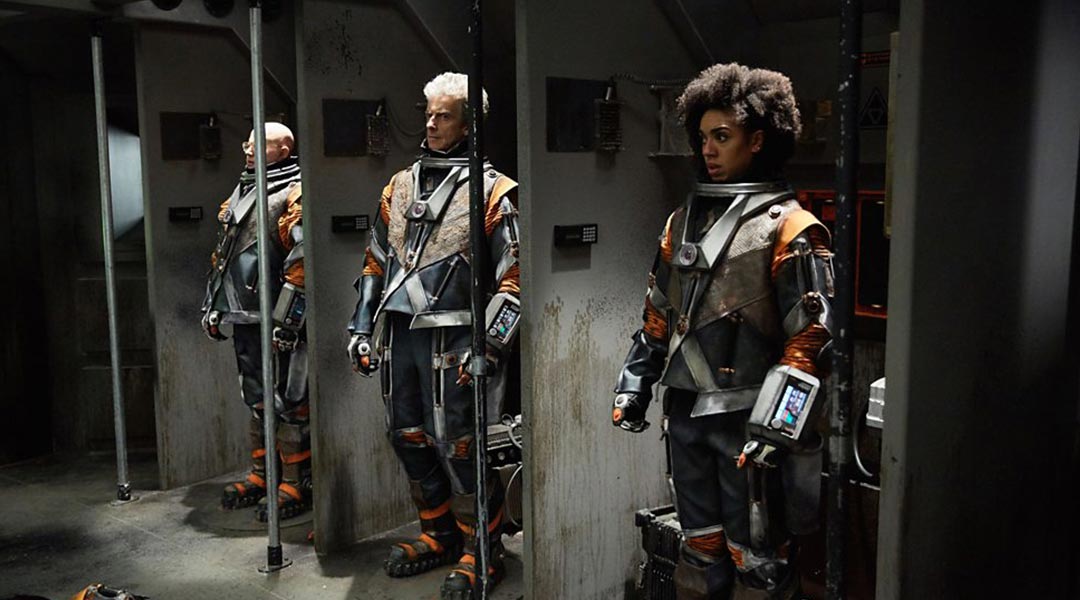 The Doctor (Peter Capaldi): Space. The final frontier. “Final” because it wants to kill us. Sometimes we forget that. Start taking it all for granted. The suits, the ships, the little bubbles of safety, as they protect us from the void. But the void is always waiting.

Ellie (Katie Brayben): I just want to tell you, if we get through this, I want to have a baby. With you. {he ignores her}. And as soon as my radio’s fixed I’m going to tell you just that.

Ellie: Can you hear me? Ivan?
Ivan (Kieran Bew): Still can’t hear you, love. You’re wasting your breath. {to himself} The one thing we can’t waste.

The Doctor: So how does space kill you? I’m glad you asked. The main problem is pressure. There isn’t any. So don’t hold your breath, or your lungs will explode.

The Doctor: …and 90 seconds in, you’re dead. Any questions? {hand raised} Yes.
Student: What’s this got to do with crop rotation?

Nardole (Matt Lucas): I’m worried you’re thinking about taking another trip, sir.
The Doctor: I’m here, guarding the vault. What do you want from me?
Nardole: The truth.
The Doctor: Don’t be unreasonable.

The Doctor: Going to space is exactly like camping.
Bill Potts (Pearl Mackie): Is it?
The Doctor: Ah, er, no.
Bill: Okay.
The Doctor: Well in a way, yes.
Bill: Great.
The Doctor: Too much between you and the outside, and you might as well stay home. To really feel it you need the space equivalent of a wafer-thin sleeping bag and a leaky two-man tent. So. Pick a campsite.

Bill: What’s that?
The Doctor: That is my theme tune. Otherwise known as a distress call.
Bill: You like distress calls?
The Doctor: You only really see the true face of the universe when it’s asking for your help.

The Doctor: I thought I sent you to Birmingham for a packet of crisps.
Nardole: Yeah, I saw through your cunning ruse.

Nardole: You know what this is?
The Doctor: If it’s not crisps, you’re sacked.
Nardole: Fluid link K57. Removed it from the TARDIS the other night after your lecture.
The Doctor: That is very untrusting.

Bill: What’s a fluid link?
Nardole: No idea, but the TARDIS can’t go anywhere without it.
The Doctor: Who told you that?
Nardole: You did.
The Doctor: Exactly. Teach you to trust me!

Nardole: I’m a bit cross with you, sir.
The Doctor: Noted. Scored out and forgotten.

The Doctor: Look at this. Classic design. Pressure seals. Hinges. None of that “shuk shuk” nonsense.
Nardole: Space doors are supposed to go “shuk shuk”. Not “mmm”.
The Doctor: Are you gonna be like this all day?
Nardole: Yeah. ‘Til you’re back where you should be.

The Doctor: Mining station. Chasm Forge. Crew of 40. I’ve got 36 records of lifesigns terminated. Last log entry: “Station declared nonprofitable.”
Nardole: Yeah, your workers all dying will do that for you.

The Doctor: The universe shows its true face when asking for help, Bill. We show ours by how we respond.

Bill: Are you trying to scare us?
The Doctor: I’m maxing out your adrenaline. Fear keeps you fast. Fast is good.
Bill: Do people ever hit you?
The Doctor: Well only when I’m talking.

Bill: What’s that?
The Doctor: Ah. Nothing to worry about.
Bill: Really?
The Doctor: Yes, not for several minutes.

Tasker (Justin Salinger): Occupants of repair station, please identify!
The Doctor: Hello there. You first.
Tasker: I’m sorry?
The Doctor: Well all your crewmates are dead. So either you’re extremely lucky or you killed them. Which is it?
Tasker: This is Drill Chief Tasker. And I haven’t killed anyone. Yet.

Tasker: For god’s sake, stay away from the suits!

Nardole: A single line of instruction was sent to all suits: “Deactivate your organic component.”

The Doctor: If we want to keep breathing we have exactly one option: buy the merchandise.

Bill: You said those things were gonna kill us.
The Doctor: Well on the bright side we’re dying already.
Bill: How does this help?
The Doctor: We know that they killed their occupants on specific orders. I think these ones are off-network, for repairs. So they can’t receive commands.
Bill: What if you’re wrong?
The Doctor: Well, we’ll be horribly murdered. Let’s say I’m right.

Nardole: The scareder you are, the faster you suffocate. So relax or die.

Dahh-Ren (Peter Caulfield): Great, we rescued a racist.
Bill: What— excuse me?

Tasker: It’s just maths now. Oxygen divided by bodies. None of us have more than 3,000 breaths left.
The Doctor: Then stop wasting them.

The Doctor: I’ll need a map of the base. A full run-down of what happened here.
Tasker: Who the hell put you in charge?
The Doctor: I’m here to save your lives, but if you don’t want me to, just raise your hand.

Nardole to Dahh-Ren: Some of my best friends are bluish.

Nardole: What are you mining? Is it worth stealing?
Abby (Mimi Ndiweni): You think this is a robbery?
The Doctor: Well killing you’d be a good start if it was.
Nardole: It’s how I’d do it. If… I was to do that sort of thing which actually I probably wouldn’t so please don’t worry.

Please remain calm while your central nervous system is deactivated. Your life is in our hands.

Bill: Where are we going?
The Doctor: Outside.
Bill: But didn’t they say it was a bad idea?
The Doctor: It is. But I know a worse one.

Bill: What happens if I throw up in my helmet?
Nardole: Color and smells.

Nardole: Listen, about the Doctor. He walked in a vacuum for far too long. He’s mostly okay, but he paid a price.
Bill: What do you mean?
Nardole: He’s in Section 12.

Bill: You’re blind.
The Doctor: I am? Oh that explains the bruised shins.

Bill: Doctor. You okay?
The Doctor: Bill, I’ve got no TARDIS, no sonic, about 10 minutes of oxygen left, and now I’m blind. Can you imagine how unbearable I’m going to be when I pull this off?

Please do not interfere with the operation of this suit. Fines may be incurred.
Bill: Great. I get fined for dying.
The Doctor: “Fined for dying.”
Bill: Doctor?
The Doctor: What if there was never a hack? What if this is just business? Business as usual?

The Doctor: Do you know what’s wrong with this universe? Believe me, I’ve looked into it. Everyone says it’s not their fault. Well, yes, it is—all of it—it’s all your fault. So what are you going to do about it?

Abby: What’s he doing?
Nardole: Cooling system again?
The Doctor: Yes. I’ve rejigged it a tiny little bit. Either that or I’ve really screwed up the plumbing. It’s tough when you’re blind.
Abby: We need to know about this plan.
The Doctor: Uh huh. The nice thing about life is, however bad it gets, there’s always one last option available. Dying well.

Ivan: He’s locked us out of the subroutine.
The Doctor: Oh, I’m sorry. I just thought I was tweeting.

Ivan: Are you out of your mind?
The Doctor: Oh yes, completely. But that’s not a recent thing. Listen, all we’ve got left is a good death. This is the moment you’ve been waiting for since the day you were born. Don’t screw it up now.

The Doctor: They’re not your rescuers, they’re your replacements. The endpoint of capitalism. The bottom line where life has no value at all. We’re fighting an algorithm—a spreadsheet. Like every worker, everywhere. We’re fighting the suits.

The Doctor: If they take our lives, we take their station. Every penny they will ever take from it! Dying well. It’s the finish line. It’s winning!
Abby: Open it.

Nardole: It’s Bill.
The Doctor: Of course it’s Bill. Fate and me, we have a thing. {to the workers} Hello suits! Our deaths will be brave and brilliant and unafraid, but above all, suits, our deaths will be expensive!

The Doctor: A moment ago we were too expensive to live. Now we’re more expensive dead.

The Doctor: Promise me you’ll be loud.
Abby: Promise.

Nardole: We were so close to not making it back. Then what happens to the vault? You know what’s at stake here.
The Doctor: Really, stop talking.
Nardole: What if you got killed in there? Hm? What happens to your precious Earth then? You need to be here and you need to be ready if that door every opens. Look at me!
The Doctor: I can’t.
Nardole: What if you came back injured? Or sick? You really think our friend down there won’t know that? Won’t sense it? Look at me!
The Doctor: Nardole, I can’t. I really can’t. I can’t look at anything ever again. I’m still blind.