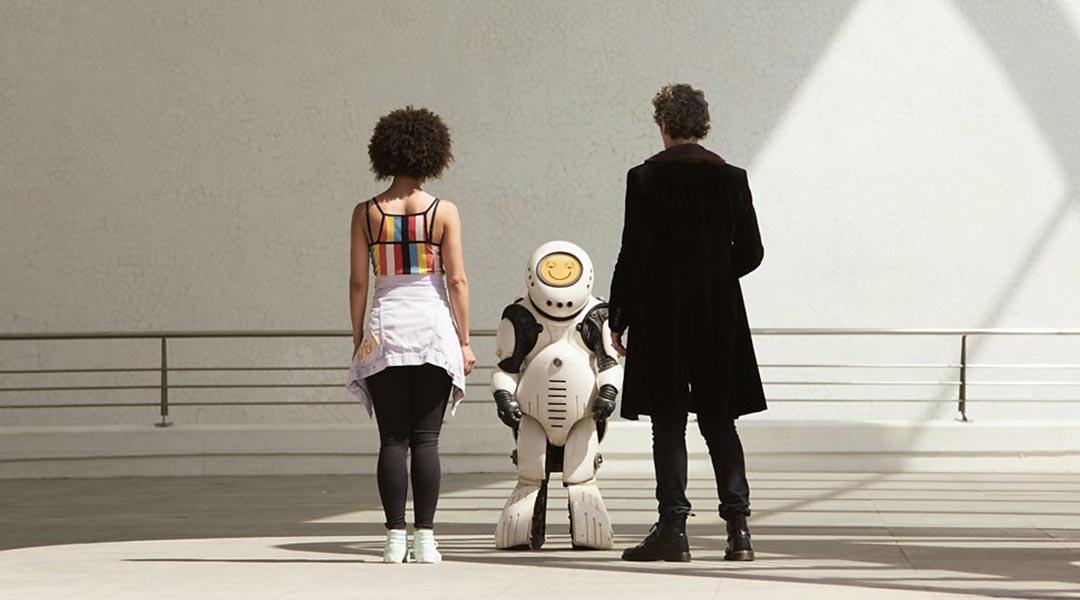 Bill Potts (Pearl Mackie): Oh, that’s a mistake.
The Doctor (Peter Capaldi): What is?
Bill: Well you can’t reach the controls from the seats. What’s the point in that? Or do you have stretchy arms like Mr. Fantastic?
The Doctor: Oh I stand. Like this. {demonstrates}
Bill: You never thought of bringing the seats a bit closer?
The Doctor: No, not so far, no.
Bill: Where’s the steering wheel?
The Doctor: Well you don’t steer the TARDIS. You negotiate with it.

Bill: How much did it cost?
The Doctor: Ah. No idea. I stole it.

Nardole (Matt Lucas): Why is she here?
The Doctor: Because she isn’t anywhere else. Kettle.
Nardole: Mm. I’m not making any for her, she can make her own. I’m not a slave for any human I can assure you.

The Doctor: Between here and my office, before the kettle boils, is everything that ever happened or ever will. Make your choice.
Bill: What choice?
The Doctor: Past or future.
Bill: Future.
The Doctor: Why?
Bill: Why’d you think? I want to see if it’s happy.

The Doctor: This is one of the Earth’s first colonies. They say the settlers have cracked the secret of human happiness.

Bill: One question: little fella said you made an oath. You’re not supposed to leave the planet.
The Doctor: Okay, I suppose I owe you an explanation. A long time ago a thing happened. As a result of the thing, I made a promise. As a result of the promise, I have to stay on Earth.
Bill: Guarding a vault.
The Doctor: Guarding a vault.
Bill: Well you’re not guarding the vault right now.
The Doctor: Yes I am. I have a time machine. I can be back before we left.
Bill: But what if you get lost or stuck or something?
The Doctor: I’ve thought about that.
Bill: And?
The Doctor: Well it would be a worry so best not to dwell on it.

Bill: These are robots? These are disappointing robots.
The Doctor: That’s a very offensive remark. Don’t make personal remarks like that.

Bill: Does it speak? Will we understand it?
The Doctor: Well depends upon what aspect of your language has survived over so many thousands of years.
Bill: Emoji! It speaks emoji!
The Doctor: Of course it does.

The Doctor: Emojis. Wearable communications. We’re in the utopia of vacuous teens.

Bill about the food: Smells like fish.
The Doctor: I’m not that fond of fish. Except socially, which complicate a meal like this.

The Doctor: This is a perfect for colony for humans, so where are the colonists?

Bill: Two portions. One portion. Is there going to be food sexism even in the future? Is this bloke utopia?

Bill: Yeah hearts though. Why two?
The Doctor: Well why one?
Bill: Does that mean you’ve got really high blood pressure?
The Doctor: Really high.

The Doctor: You asked me where all the people were. And I theorized that they hadn’t got here yet. Did I sound convincing?
Bill: Yeah.
The Doctor: And did I convince myself?
Bill: No.

Bill: If he’s chasing us, he’s moving very slowly.
The Doctor: Do you know what it means when something chases you very slowly?
Bill: What?
The Doctor: It means there’s a reason that they don’t have to run.

Bill: Where are you going?
The Doctor: There’s a giant smiley abattoir over there. And I’m having this really childish impulse to blow it up! Be right back.

The Doctor running back: There’s broadband in there. Go watch some movies or something.
Bill: Well I get that someone has to do something, but why is it you? Can’t you phone the police?  Isn’t there a helpline or something?
The Doctor: And stay away from my browser history!

Bill watching the Doctor: A penguin with his ass on fire.

Bill: Why are you Scottish?
The Doctor: I’m not Scottish, I’m just cross.
Bill: Is there a Scotland in space?
The Doctor: They’re all over the place. Demanding independence from every planet that they land on.

The Doctor:Why are you here?
Bill: Because I figured out why you keep your box as a phonebox.
The Doctor: I told you, it’s stuck.
Bill: “Advice and assistance obtainable immediately.” You like that.
The Doctor: No I don’t.
Bill: See, this is the point. You don’t call the helpline because you are the helpline.

Bill: You never passed by in your life. You couldn’t even leave me serving chips. So I’m not going to leave you.

The Doctor: Smile. You’re in the belly of the beast.

Bill: I really am on a spaceship.
The Doctor: Yes. Which we are about to blow up.
Bill: How are you allowed to do that? Like, how are you allowed to blow something up and not get into trouble? I mean, “blow something up, get into trouble.” That is a standard sequence.
The Doctor: What do you mean “allowed”? It’s a moral imperative. This is a murder machine.

The Doctor: It’s like it wants to get blown up.

Bill: Doctor, why did people come here? Did something terrible happen?
The Doctor: I can’t hear you. burning himself This isn’t as easy as it looks.
Bill: I’ve got to know. The people who came here. Were they the last people? Were they our last hope?
The Doctor: Earth was evacuated. But there were a number of ships. I’ve bumped into a few of them over the years.

The Doctor: We can’t blow up the city.
Bill: Why? Those pods, what’s in them?
The Doctor: I got it wrong. I got it very, very wrong. The colony ship isn’t on the way. It’s right here. The colonists are all around us, cryogenically frozen. What’s in those pods, Bill, is the surviving population of Earth. And I nearly killed all of them.

Bill: So what happens now?
The Doctor: Now? Now they’re all going to leave the ship and find their friends and family mulched in the garden. And if they don’t smile about that? It’s going to be the end of the human race.

The Doctor: Grief! Grief! Grief as plague!
Bill: How?
The Doctor: The vardies, well, their job was to maintain happiness. At first that meant making sure there was enough oxygen and water. That’s what the badges are meant to communicate. Satisfaction. A positive mental state. But the vardi are smart. They learn. Try to be good servants. So they expand the definition of happiness until…
She died.

The Doctor: I would say that a lot of the colonists had friends or family that were working here as shepherds. When they find out what happened—
Bill: They’ll be grief-stricken.
The Doctor: And after that?
Bill: A massacre.

The Doctor: The vardi are identifying as under attack. Which means they identify as a species. They are self-aware. They… they’re alive!

The Doctor: Do you know why I always win at chess? Because I have a secret move. I kick over the board.

The Doctor: {…} Some people say he should have wished for an infinite series of wishes. But if your city proves anything, it is that granting all your wishes is not a good idea.

The Doctor: In fact the fisherman wished that he hadn’t wished the first two wishes. Thus in a way he pressed the reset button.
Steadfast: What the hell did you do?
The Doctor: Aren’t you listening? I pressed the reset button. Every computer has one. And anyone can find it. Especially is they happen to be a scary, handsome genius from space. I reinitialized the entire command structure, retaining all programmed abilities, but deleting the supplementary preference architecture.
Bill: He turned it off and on again.
The Doctor: I turned it off and on again.

The Doctor: Welcome to your new world. Meet the Vardi. They are, as of now, the indigenous lifeform. You’d best make friends with them. Because there’s loads of them. And they’re the only ones who know how anything works.

The Doctor: I have a suggestion for you.
Bill: Smile.

The Doctor: Hello. I’m the Doctor. A few hours ago I made the mistake of not recognizing your status as an emergent new lifeform. As recompense for my mistake, please, allow me to act as your negotiator with the migratory conglomerate known as the human race. They’re looking for a place to stay and they’ve got their eye on your city. Would you like me to discuss rent?

Bill: So is it gonna work?
The Doctor: That’s up to them.

Bill: Did you just… well, did we just jumpstart a new civilization.
The Doctor: It’s a dirty job but someone’s gotta do it.
Bill: Do you do this all the time?
The Doctor: Do what?
Bill: Fly around sorting things out like some sort of intergalactic policeman?
The Doctor: I don’t sort things out. I’m definitely not a policeman.
Bill: Well you live in a police box.

The Doctor: …and everything is exactly as we left it.
Bill: Wasn’t snowing when we left.
The Doctor: Maybe I do need a steering wheel.

Bill: Where are we?
The Doctor: London. And this is the Thames. {an elephant approaches}