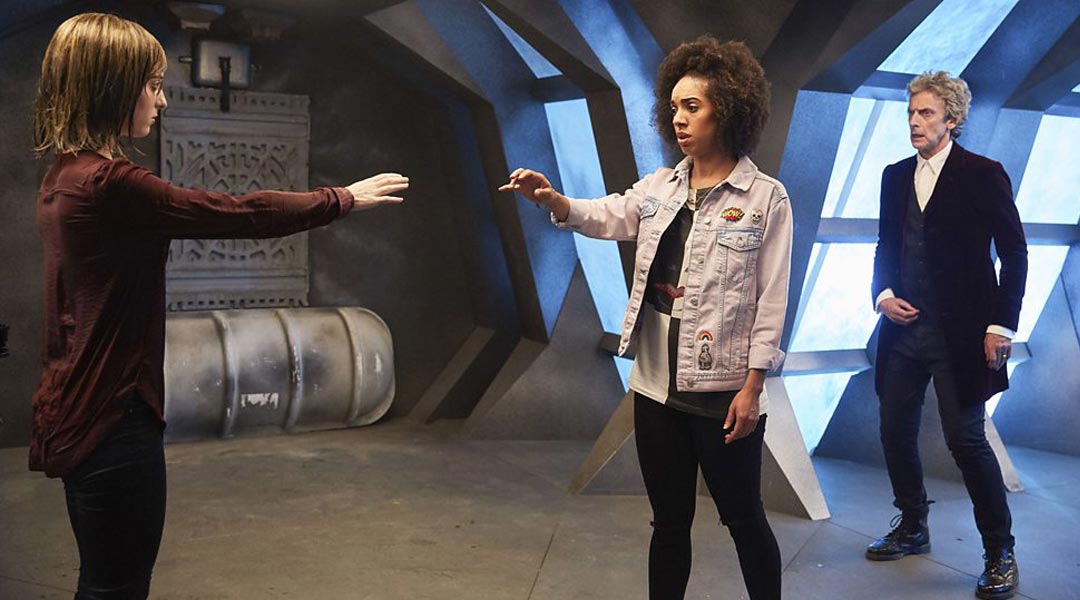 The Doctor (Peter Capaldi): Potts?
Bill Potts (Pearl Mackie): Yeah.
The Doctor: Bill Potts?
Bill: You wanted to see me.
The Doctor: Ah, you’re not a student at this university.
Bill: Naw, I work in the canteen.
The Doctor: Yeah, but you come to my lectures.
Bill: No I don’t. I never do that.
The Doctor: I’ve seen you.
Bill: Love your lectures. They’re totally awesome.

The Doctor: Why’d you come to my lectures when you’re not a student?
Bill: Okay, so my first day here, in the canteen, I was on chips. There was this girl—student. Beautiful, like a model, only with talking and thinking. She looked at you and you perved. Every time. Automatic, like physics. Eye contact, perversion. So I gave her extra chips. Every time, extra chips. Like a reward for perversion. Every day, got myself on chips, rewarded her. Then finally—finally—she looked at me, like she didn’t notice that I actually noticed all the extra chips. Do you know what I realized? She was fat. I’d fatted her. That’s life, isn’t it. Beauty or chips. I like chips. So does she, so… that’s okay.
The Doctor: And how does that in any way explain why you keep coming to my lectures?
Bill: Yeah, it doesn’t really, does it? I was hoping something would develop.

Bill: But I’m not a student. I’m not part of the university. I never even applied.
The Doctor: We’ll sort all that out later.
Bill: You kind of have to sort that out earlier.

Bill: Oh. Um, people just call you The Doctor. What do I call you?
The Doctor: “The Doctor”.
Bill: But Doctor’s not a name. I can’t just call you Doctor. Doctor what?

Bill: Am I on time?
The Doctor: That’s a very big question.

Bill: Sorry, none of my business, but are you freaking out about something?
Heather (Stephanie Hyam): Please. You can say no. Would you come with me? Can I show you something?

Heather: There’s a puddle over there. It hasn’t rained for a week.
Bill: Yeah, but… well, you know. Half the students here are blokes.
Heather: Go and look in it.
Bill: You want me to look in a puddle?
Heather: Please.

The Doctor: It’s a rug. Haven’t got you anything.
Bill: It’s okay. It was cheap.

Bill: Going anywhere for Christmas?
The Doctor: I never go anywhere.
Bill: That’s not true. You go places. I can tell. My mom always said with some people you can smell the wind in their clothes.
The Doctor: She sounds… nice.
Bill: She died when I was a baby.
The Doctor: If she died when you were a baby when did she say that?
Bill: In my head.

Bill: Still making eyes at a puddle?
Heather: Did you ever work out what was wrong with your reflection?
Bill: Nah.
Heather: Come ’round, I’ll show you.
Bill: Promise you won’t go?
Heather: Promise.

Bill: I see my face all the time. I never liked it, it’s all over the place. It’s always doing expressions when I’m trying to be enigmatic. I know my face. And there was something wrong with my face in the puddle. What could be wrong with your own face? watches as the Doctor runs past below her.

The Doctor: That’s my face, yeah?
Bill: You seem you’re a bit flexible on the subject.
The Doctor: Oh, you have no idea.

Bill: Look, I know you know lots of stuff about, well, basically everything. But, do you know any sci-fi?
The Doctor: Go on.
Bill: Well, what if she’s… possessed. Something like that.
The Doctor: Possessed by what?
Bill: I don’t know. Saw this thing on Netflix. Lizards in people’s brains.
The Doctor: Right. So you meet a girl with a discolored iris and your first thought is she might have a lizard in her brain?

Moira (Jennifer Hennessy): Sorry I’m not there, love. But I think we both know it’s time I treated myself.
Bill: Are you with Neville?
Moira: Why would I be back with Neville after last time? Why do you think I’m such an idiot?
Bill: Well you’re calling from his phone.

The Doctor: Hello, Bill. {water starts pouring in under the door} What’s that?
Bill: I’ll tell you what it isn’t. It isn’t a freak optical effect. And it’s following me.

The Doctor: I’ll tell you what. Let’s just pop into my box.
Bill: Your box? What good is getting in your box going to do?
The Doctor: What an extraordinarily long and involved answer this is going to be.
Bill: How do we stop it getting in? We’re trapped in here.
The Doctor: Nothing gets through these doors.
Bill: But they’re made of wood. They’ve got windows!

Bill: Look at this place. It’s like a—
The Doctor: Spaceship.
Bill: Kitchen.
The Doctor: A what?
Bill: A really posh kitchen. All metal. What happened to the doors though? Did you run out of money?

The Doctor: What you are standing in is a technological marvel. It is science beyond magic. This is the gateway to everything that every was. Or ever can be.
Bill: Can I use the toilet?

The Doctor: She’s just passing through. She wants to use the toilet.
Nardole (Matt Lucas): Oh. I’d… give it a minute if I were you.

Bill: So your box can move. It can go anywhere it likes?
Nardole: Mm. Good, innit?
Bill: Anywhere at all in the whole university?
The Doctor: Is it my imagination, or is this taking longer than normal?

Bill: Hang on. The room’s still inside the box. This isn’t a knock through.
The Doctor: No.
Bill: Doctor, it’s bigger on the inside than it is on the outside!
Nardole: Hey hey! We got there!

Bill: How is that possible? How do you do that?
Nardole: Well first, you have to imagine a very big box fitting inside a very small box.
Bill: Okay.
Nardole: Then, you have to make one. It’s the second part people normally get stuck on.

Nardole: So how do we know this water thing is actually dangerous?
The Doctor: Ah, because most things are.
Nardole: Hm. That’s true.
Bill: Why? Is everything out here evil?
The Doctor: Hardly anything is evil. But most things are hungry. Hungry looks very like evil from the wrong end of the cutlery. Or do you think your bacon sandwich loves you back?

Bill: Oh my god. I understand.
Nardole: You what?
Bill: The last thing she said to me. She promised she wouldn’t leave without me.
The Doctor: The last conscious thought, driving her across the universe. Never underestimate a crush.

Nardole: That’s the Doctor for you. Never notices the tears. He walks off.
Bill: I don’t think they’re mine.

Bill: I saw it all for a moment. Everything out there. She was going to let me fly with her. She was inviting me. I was too scared.
The Doctor: Scared is good. Scared is rational. She wasn’t human anymore.
Bill: Will we see her again?
The Doctor: Don’t see how.

The Doctor: No no no no. You have to forget about that.
Bill: Don’t see how I can.
The Doctor: I do.

The Doctor: I just want to fix something.
Bill: Whoa. What are you doing?
The Doctor: Don’t worry, this won’t hurt at all.
Bill: No, but tell me.
The Doctor: Nothing.
Bill: Yeah, ’cause I think you’re going to wipe my memory. I’m not stupid you know. That’s the trouble with you, you don’t think anyone’s ever seen a movie. I know what a mind wipe looks like!
The Doctor: I have no choice. I’m here for a reason. I am in disguise. I have promises to keep. No one can know about me.
Bill: This is the most exciting thing that’s ever happened in my life. The only exciting thing!
The Doctor: I’m sorry.

Bill: Okay, do what you gotta do. But imagine. Just imagine if someone did this to you.

The Doctor after the TARDIS chimes in: Will you all please just leave me alone. I can’t do that anymore. I promised!

The Doctor: It’s a big universe. And maybe one day we’ll find her.
Bill: What changed your mind?
The Doctor: Time.
Bill: Time?
The Doctor: And Relative Dimension in Space. It means, “What the hell.”