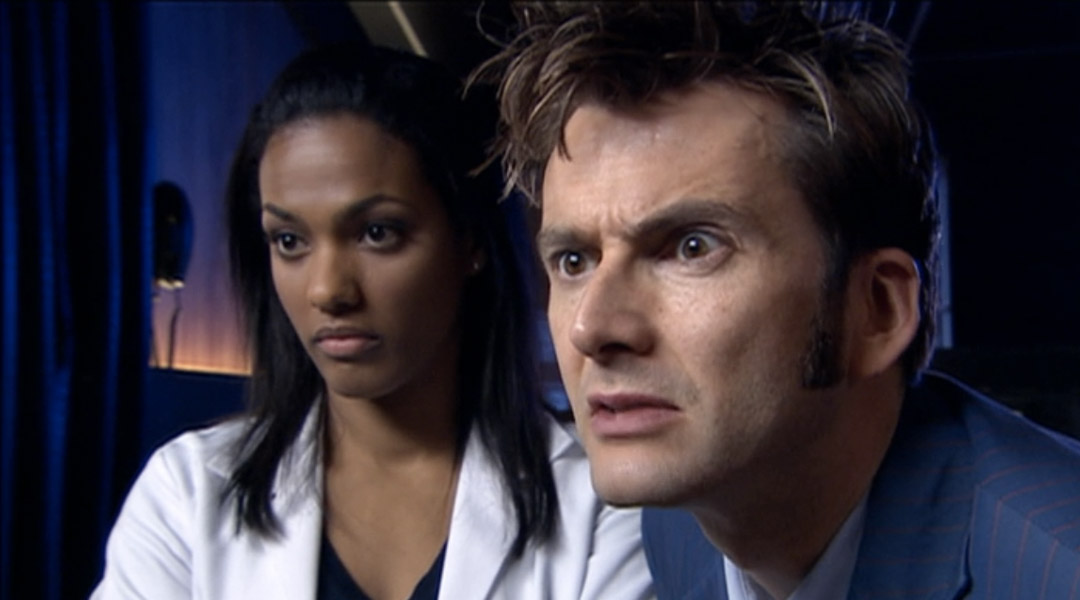 Sylvia (Jacqueline King): Donna, don’t go! Look what happens every time that doctor appears. Stay with us. Please.
Wilfred (Bernard Cribbins): You go, my darlin’.
Sylvia: Dad!
Wilfred: Don’t listen to her. You go with the Doctor. That’s my girl!

The Doctor: Oh, I’ve never given you a key. Keep that. Go on, that’s yours. Quite a big moment really.
Donna: Yeah. Maybe we can get sentimental after the world’s finished choking to death.
The Doctor: Good idea.

Staal: The spoils of war! The Doctor’s infamous vessel in Sontaran hands.

The Doctor: I’m stuck. On Earth, like… like an ordinary person. Like a human. How rubbish is that? Sorry, no offense but come on!
Martha: So what do we do?
The Doctor: Well. I mean it’s shielded. They could never detect it. pauses
Donna: What?
The Doctor: I was just wondering, have you phoned your family and Tom?
Donna: No. What for?
The Doctor: The gas. Tell them to stay inside.
Donna: Of course… I will, yeah. But what about Donna? I mean, where’s she?
The Doctor: Oh… she’s gone home. She’s not like you. She’s not a soldier. Right! So. Avanti!

Luke Rattigan (Ryan Sampson): It’s time I reveal what our work has been for!

The Doctor: Change of plan!
Colonel Mace: Good to have you fighting alongside us, Doctor.
The Doctor: I’m not fighting. I’m not-fighting, as in not-hyphen-fighting. Got it?

Colonel Mace: My god. They’re like trolls.
The Doctor: Yeah… Loving the diplomacy, thanks. So tell me, General Staal, since when did you lot become cowards?
Staal: How dare you!
Colonel Mace: Oh, that’s diplomacy?
Staal: Doctor, you impugn my honor!
The Doctor: Yeah, I’m really glad you didn’t say “belittle” ’cause then I’d have a field day.

The Doctor: Fifty thousand years of bloodshed. And for what?
Staal: For victory!

The Doctor: Finished?
Staal: You will not be so quick to ridicule when you see our prize. Behold! We are the first Sontarans in history to capture a TARDIS.
The Doctor: Well. As prizes go that’s… noble. As they say in Latin, Dona nobis pacem.
Donna: That’s me. I’m here!

The Doctor: BIg mistake though, showing it to me.
Donna: But who do I phone?
The Doctor: Because I’ve got a remote control.
Staal: Cease transmission!
Donna: Doctor, what number are you on? You haven’t even got a number!

Luke: I call it Earth point Two. I, ah… did think about Rattigan’s World. But we can take a vote on that.
What the hell are you on about?

Luke: I did this for you. Don’t you see? We’ve spent all our lives excluded. The clever ones. They… they laughed at us. And pulled us down, those ordinary people out there—those… cattle. This is our chance to leave them behind.
Student (Meryl Fernandes): You mean you want them dead?
Luke: And I choose you to survive! With Planetfall we can start again. We can build and breed. We can prosper, we can do anything!
Student: We’re going to breed?
Luke: I’ve designed a mating program. I’ve planned the whole thing.
Student: Well then, shoot me!

Wilfred: Donna, where are you?
Donna looks around the TARDIS: It’s sort of hard to say. Are you all right?

Staal: The planet is going nuclear. I admire them. The bravery of idiots is bravery nonetheless.

The Doctor: Missiles wouldn’t even dent that ship. So why are the Sontarans so keen to stop you. Any ideas?
Martha: How should I know?

The Doctor: He wasn’t Greyhound 40. His name was Ross. Now listen to me. And get them out of there!!

Skorr (Dan Starkey): This is too easy. They’re running like slime bait from a speel fox.

The Doctor: Times like this I could do with the Brigadier. No offense.
Colonel Mace: None taken. Sir Alastair is a fine man if not the best. Unfortunately he’s stranded in Peru.

Luke: I’m sorry to report, sir, I’ve failed. They wouldn’t come. The students, they… didn’t have the imagination to believe.
Staal: A pity! We’ve lost our target practice.
Luke: What do you mean?
Staal: Upon arrival on board this ship your students would have been shot down. Perhaps they were more clever than you thought.

Donna pleased with herself: Back of the neck!

Martha: You’re not going without me.
The Doctor: Wouldn’t dream of it.

Colonel Mace: Latest firing stock. What do you think, Doctor?
The Doctor wearing a gas mask: Are you my mummy?
Colonel Mace: If you could concentrate.

Colonel Mace: Attention all troops! The Sontarans might think of us as primitive. As does every passing species with an ax to grind. They make a mockery of our weapons, our soldiers, our ideals. But no more. From this point on, it stops. From this point on, the people of Earth fight back. And we show them. We show the warriors of Sontar what the human race can do.

The Doctor: It’s the Valiant!

The Doctor: That’s brilliant!
Colonel Mace: Getting a taste for it, Doctor?
The Doctor: No, not at all. Not me.

The Doctor: Am I supposed to be impressed?
Martha: Wish you carried a gun now?
The Doctor: Not at all.
Martha: I’ve been stopping the nuclear launch all this time.
The Doctor: Doing exactly what I wanted. I needed to stop the missiles just as much as the Sontarans. I’m not having Earth start an interstellar war. You’re a triple agent!
Martha: When did you know?
The Doctor: About you? Oh, right from the start. Reduced iris contraction, slight thinning of the hair follicles on the left temple. And frankly you smell. You might as well have worn a t-shirt saying “clone”. Although, maybe not in front of Captain Jack. You remember him, don’t you? ‘Cause you’ve got all her memories. That’s why the Sontarans had to protect her. To keep you inside UNIT. Martha Jones is keeping you alive.

The Doctor: Here we go, the old team back together. Well, the new team.

Donna: You know that coat… sort of works.
Martha: I feel like a kid in my dad’s clothes.
Donna: Oh well, if you’re calling him “dad” you’re definitely getting over him.

Wilfred: It’ll be alright. Donna said so. She promised.

The Doctor: Planning a little trip, were we?
Luke: They promised me a new world.

The Doctor: Right, so. Donna, thank you. For everything. Martha, you too. Oh… so many times. Luke, do something clever with your life.
Donna: You’re saying goodbye.
The Doctor: Sontarans are never defeated. They’ll be getting ready for war. And, well, you know… I’ve recalibrated this for Sontaran air, so…
Martha: You’re going to ignite them.
Donna: And kill yourself.
Martha: Just send that thing up, on its own. I don’t know. Put it on a delay.
The Doctor: I can’t.
Donna: Why not?
The Doctor: I’ve got to give them a choice.

Martha: What are you doing?
Luke: Something clever.

Wilf: Now you go with him. That wonderful Doctor. Go and see the stars. And then bring a bit of them back for your old gramps.

Donna to Martha: So, you gonna come with us? We’re not exactly short on space.