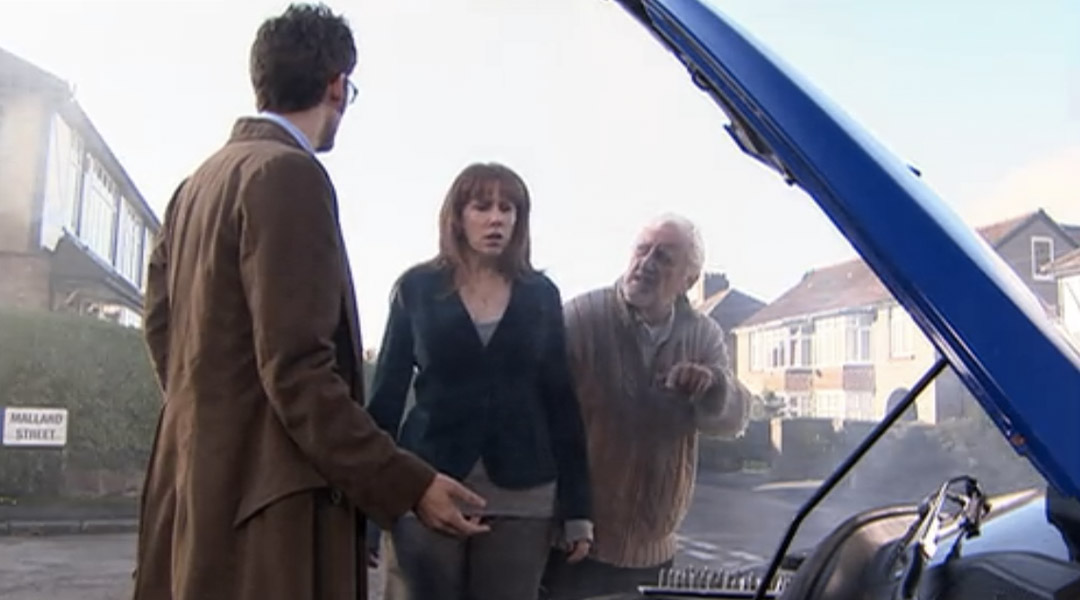 Atmos: This is your final destination.

Donna: I can’t believe I’m doing this!
The Doctor: No, neither can I. Oh oh, careful! Left hand down, left hand down! Getting a bit too close to the 1980s.
Donna: What am I going to do, put a dent in ’em?
The Doctor: Well someone did.

The Doctor: Hello?
Martha: Doctor? It’s Martha. And I’m bringing you back to Earth.

The Doctor: Martha Jones.
Martha: Doctor.
The Doctor: You haven’t changed a bit.
Martha: Neither have you!

The Doctor: Martha, Donna. Donna, Martha. Please, don’t fight. I can’t bear fighting.
Donna: You wish. I’ve heard all about you. He talks about you all the time.
Martha: I dread to think.
Donna: No no, he says nice things. Good things. Nice things. Really good things.
Martha: Oh my god, he’s told you everything.
Donna: Didn’t take long to get over it, though. Who’s the lucky man?
The Doctor: What man? Lucky what?
Donna: She’s engaged, you prawn.

Donna: He is too skinny for words. You give him a hug, you get a papercut.
The Doctor: Oh, I’d rather you were fighting.

Donna: Is that what you did to her? Turned her into a soldier?

Colonel Mace (Rupert Holliday Evans): I’ve read all the files on you. Technically speaking, you’re still on staff. You never resigned.
Donna: What, you used to work for them?
The Doctor: Yeah, long time ago. Back in the seventies. Or was it the eighties?
But it was all a bit more homespun back then.

Colonel Mace: A modern UNIT for the modern world.
Donna: What, and that means arresting ordinary factory workers. In the street, in broad daylight. It’s more like Guantanamo Bay out there. Donna, by the way. Donna Noble. Since you didn’t ask. I’ll have a salute.

General Staal: Excellent skills of deduction! I would rate you above average, solider. Well done. Whereas you, you smell of sweat and fear.

Martha: It’s all right for you. You can just come and go. But some of us have got to stay behind. So I’ve got to work from the inside. And by staying inside maybe I stand a chance of making them better.
The Doctor: Yeah? That’s more like Martha Jones.

Donna: Oy, you lot! All your Storm Troopers and your sonics— rubbish. You should have come with me.
The Doctor: Why? Where’ve you been?
Donna: Personnel. That’s where all the weird stuff’s happening. In the paperwork.

Martha: I can see why he likes you. You are good.
Donna: Super Temp.

Colonel Mace: …Now runs the Rattigan Academy. Private school, educating students hand-picked from all over the world.
The Doctor: A hothouse for geniuses. Wuldn’t mind going there. I get lonely.

Martha: Do they know where you are? Your family? I mean that you’re travelling with the Doctor.
Donna: Not really. Although, my Wilfred sort of waved us off. But I didn’t have time to explain.
Martha: You just left him behind?
Donna: Yeah.
Martha: I didn’t tell my family. Kept it all so secret. It almost destroyed them.
Donna: In what way?
Martha: They ended up imprisoned. They were tortured. My mum, my dad, my sister. It wasn’t the Doctor’s fault but you need to be careful. ‘Cause you know the Doctor—he’s wonderful, he’s brilliant, but he’s like fire. Stand too close and people get burnt.

The Doctor: Oh, just in time! C’mon, we’re going to the country. Fresh air and geniuses. What more could you ask.
Donna: I’m not coming with you. I’ve been thinking. I’m sorry. I’m going home.
The Doctor: Really?
Donna: I’ve got to.
The Doctor: Well. If that’s what you want. Only it’s a bit soon. I had so many places I wanted to take you. The fifteenth broken moon of the Medusa Cascade. The lightning skies of Cotter Palluni’s World. Diamond coral reefs of Kataa Flo Ko. Thank you. Thank you, Donna Noble. It’s been brilliant. You’ve… you’ve saved my life in so many ways. You’re… you’re just popping home for a visit, that’s what you mean.
Donna: You dumbo.
The Doctor: And then you’re coming back.
Donna: Know what you are? A great big, outer space dunce.
The Doctor: Yeah.

Wilfred Mott (Bernard Cribbins): I said so, didn’t I? Aliens! I said they was real. I just didn’t expect them in a little blue box.
Donna: It’s bigger on the inside.

Sylvia (Jacqueline King): Where have you been these past few days, Lady? After that silly little trick with the car keys. I phoned Fiona and she said she hadn’t seen hide nor hair.
Donna: I’ve just been travelling.
Sylvia: Oh, hark at her. Michael Palin.

Ross (Christian Cooke): UNIT’s been watching the Rattigan Academy for ages. It’s all a bit “Hitler Youth.” Exercise at dawn and classes and special diets.
The Doctor: Ross, one question. If you do think that Atmos is dodgy—
Ross: How come we’ve got it in the Jeeps. Tell me about it. They’re fitted as standard in all government vehicles. We can’t get rid of them so we can prove there’s something wrong. Drives me around the bend.
The Doctor: Oh, nice one!
Ross: Timed that perfectly.
The Doctor: Yeah, yeah you did.

The Doctor: This is PE? Wouldn’t mind a kick around. I’ve got me daps on.

The Doctor: With equipment like this you could—oh, I don’t know—move to another planet or something.
Luke: If only that was possible.
The Doctor: “If only that were possible.” Conditional clause.

Luke: You’re smarter than the usual UNIT grunts, I’ll give you that.
The Doctor: He called you a grunt! Don’t call Ross a grunt. He’s nice. We like Ross.

The Doctor: I was just thinking. What a responsible 18-year-old. Inventing zero carbon cars. Savin’ the world…
Luke: It takes a man with vision.
The Doctor: Mm. Blinkered vision. ‘Cause Atmos means more people driving. More cars, more petrol. End result the oil’s gonna run out faster than ever. The Atmos system could make things worse.
Luke: Yeah, well see. That’s a tautology. You can’t say Atmos system. ‘Cause it stands for Atmospheric Emission System. So you can’t say “Atmospheric Emission System System.” Do you see, Mr. Conditional Clause?
The Doctor: It’s been a long time since anyone’s said “no” to you, isn’t it?

The Doctor: Just looked like a “thing”, didn’t it? People don’t question “things”. They just say, “oo… it’s a thing.”

The Doctor: This isn’t typical Sontaran behavior, is it? Hiding, using teenagers, stopping bullets. A Sontaran should face bullets. With dignity. Shame on you!

The Doctor: And your name?
General Staal: General Staal. Of the Tenth Sontaran Fleet. Staal The Undefeated.
The Doctor: Oh, that’s not a very good nickname. What if you do get defeated? “Staal the Not-Quite-So-Undefeated Anymore But Nevermind.”
Ross: It’s like a potato. A baked potato. A talking baked potato.
The Doctor: Now, Ross. Don’t be rude. You look like a pink weasel to him.

Luke: How do you tell each other apart?
General Staal: We say the same of humans.

Luke: 52 deaths in the same second, man. That is just so cool.
General Staal: Is the temperature significant?

The Doctor: Try going right.
Ross: It said left.
The Doctor: I know. So go right.

The Doctor: Get down! the Atmos sparks a few times and dies. Oh, is that it?

Wilfred: Is it him? Is it the Doctor? Oh, it’s you.
The Doctor: It’s who? Oh, it’s you.
Donna: What, have you met before?
Wilfred: Yeah, Christmas Eve. He disappeared right in front of me.
Donna: And you never said?
Wilfred: Well you never said! Wilf, sir, Wilfred Mott. You must be one of them aliens.
The Doctor: Yeah, but don’t shout it out. Nice to meet you properly, Wilf.

The Doctor: That wasn’t just exhaust fumes. It’s some sort of gas. Artificial gas.
Donna: But if it’s poisonous, then they’ve got poisonous gas in every car on earth.