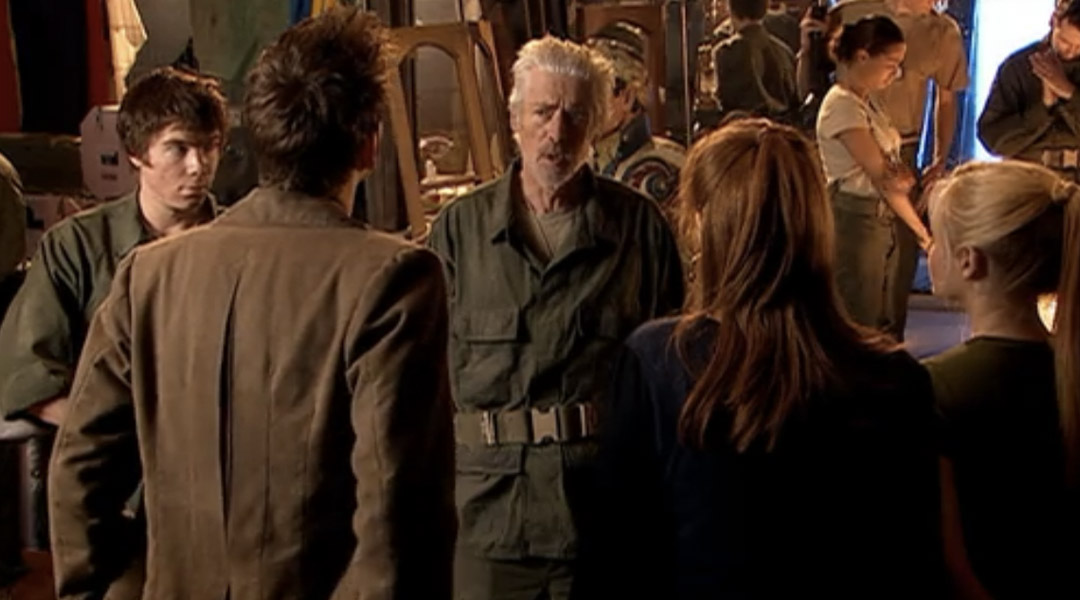 The Doctor: I don’t know where we’re going, but my old hand’s rather excited about it.
Donna: I thought that was just some freaky alien thing. You telling me it’s yours?
The Doctor: Well.
Martha: It got cut off—he grew a new one.
Donna: You are completely impossible.
The Doctor: Not impossible. Just… a bit unlikely.

The Doctor: Why did the TARDIS bring us here?
Martha: Oh, I love this bit.
Donna: I thought you wanted to go home.
Martha: I know. But, all the same. It’s that feeling you get.
Donna: Like you swallowed a hamster.

Soldier: Don’t move! Stay where you are. Drop your weapons.
The Doctor: We’re unarmed. Look, no weapons. Never any weapons. We’re safe.
Soldier: Look at their hands. They’re clean.
Soldier 2 : Alright, process them. Him first.

The Doctor: Something tells me this isn’t about to check my blood pressure.

Martha: Where did she come from?
The Doctor: From me.
Donna: From you? How? Who is she?
The Doctor: Well she’s… well. She’s my daughter.
Jenny (Georgia Moffett): Hello Dad.

The Doctor: They sealed off the tunnel. Why did you do that?
Jenny: They were trying to kill us.
The Doctor: But they’ve got my friend!
Jenny: Collateral damage. At least you’ve still got her. He lost both his men. I’d say you came out ahead.
Donna: Her name’s Martha. And she’s not collateral damage, not for anyone. Have you got that, GI Jane?

Martha: Half-fish, half-human. How am I supposed to know? Is that a shoulder? Feels like a shoulder.

Martha: Now then. I’m Dr. Martha Jones. Who the hell are you?

Donna: Not what you’d call a natural parent, are you?
The Doctor: They stole a tissue sample at gunpoint and processed it. It’s not what I’d call natural parenting.
Donna: Rubbish. My friend Nerys fathered twins using a turkey baster. Didn’t bother her.
Don’t extrapolate a relationship from a biological accident.

General Cobb (Nigel Terry): Don’t think you can infect us with your peacemaking.

The Doctor: How long has this war gone on for?
Cobb: Countless generations. Marked only by the dead.
Donna: What, fighting all this time?
Jenny: Because we must. Every child of the machine is born with this knowledge. It’s our inheritance. It’s all we know. How to fight and how to die.

Jenny: I have a body, I have a mind, I have independent thought. How am I not real? What makes you better than me?
Cobb: Well said, soldier. We need more like you. If ever we’re to find the Source.
The Doctor: Oo! “Source”. What’s that, then? What’s the Source? I like a Source. What is it?
Cobb: The breath of life.

Cobb: Whoever holds the Source controls the destiny of this planet.

The Doctor: Call me old fashioned but if you really wanted peace couldn’t you just stop fighting?
Cobb: Only when we have the Source. It’ll give us the power to erase every stinking Hath from the face of this planet.
The Doctor: Hang on, hang on. A second ago it was “peace in our time”. Now you’re talking about genocide.
Cobb: For us, that means the same thing.
The Doctor: Then you need to get yourself a better dictionary. When you do, look up genocide. You’ll see a little picture of me there, and the caption will read, “Over my dead body!”.
Cobb: And you’re the one who showed us the path to victory. But you can consider the irony from your prison cell. Clyde, at arms!
Donna: Oy! Oy, alright! Cool the beans, Rambo.
Cobb: Take them! I won’t have them spreading treason. And if you try anything, Doctor, I’ll see that your woman dies first.
The Doctor: We’re, we’re not a couple.
Donna: I’m not his woman.

The Doctor: I’m going to stop you, Cobb. You need to know that.
Cobb: I have an army and the breath of God on me. What’ll you have?
The Doctor pointing to his brain: This.

Cline (Joe Dempsie): What about the new soldier?
Cobb: Can’t trust her. She’s from pacifist stock.

Martha: But I didn’t do anything. I think I just started a war.

Donna: More numbers. They’ve got to mean something.
The Doctor: Makes as much sense as the breath of life story.

Donna: So the Source could be a weapon and we’ve just given directions to Captain Nutjob.
The Doctor: Oh yes.
Donna: Not good, is it?

Donna: C’mere. Listen. And then tell me where she belongs.
The Doctor: Two hearts.
Donna: Exactly.

The Doctor: You’re an echo. That’s all. A Time Lord is so much more. A sum of knowledge, a code, a shared history. A shared suffering. Only it’s gone now, all of it. Gone forever.
Jenny: What happened?
The Doctor: There was a war.
Jenny: Like this one?
The Doctor: Bigger. Much bigger.
Jenny: And you fought? And killed?
The Doctor: Yes.
Jenny: Then how are we different?

Donna: Let me distract this one. I have picked up a few womanly wiles over the years.
The Doctor: Let’s… save your wiles for later. In case of emergency.

Jenny: Always thinking, both of you. Who are you people?
The Doctor: I told you, I’m the Doctor.
Jenny: The Doctor. That’s it?
Donna: That’s all he ever says.
Jenny: So you don’t have a name either. Are you an anomaly too?
The Doctor: No.
Donna: Oh come off it. You’re the most anomalous bloke I’ve ever met.
Jenny: And Time Lord. What are they for exactly?
The Doctor: For? They’re not… not “for” anything.
Jenny: So what do you do?
The Doctor: I travel. Through time and space.
Donna: He saves planets, rescues civilizations, defeats terrible creatures. And runs a lot. Seriously, there’s an outrageous amount of running involved.

Donna about the lasers: That’s not mood lighting, is it? the mouse is sacrificed for the cause. No, I didn’t think so.

Cobb: You’re a child of the machine. You’re on my side. Join us. Join us in the war against the Hath. It’s in your blood, girl. Don’t deny it!

Jenny: I’ll have to manage on my own. Watch and learn, Father.
Donna: No way. But that was impossible.
The Doctor: Not impossible. Just a bit unlikely.

The Doctor: I warned you, Cobb. If the Source is a weapon I’m going to make sure you never use it.
Cobb: One of us is going to die today, and it won’t be me.

Donna: Oh, I know that look. See it a lot ’round our way. Blokes with pushchairs and prams. You’ve got Dad Shock.
The Doctor: Dad Shock?
Donna: Sudden, unexpected fatherhood. Take a bit getting used to.
The Doctor: No it’s not that.
Donna: Well what is it then? Having Jenny in the TARDIS, is that it? What’s she going to do, cramp your style? Like you’ve got a sports car, shes’s going to turn it into a people carrier.
The Doctor: Donna, I’ve been a father before.
Donna: What?
The Doctor: Lost all that long time ago. Along with everything else.
Donna: I’m sorry. I didn’t know. Why didn’t you tell me? You talk all the time but you don’t say anything.
The Doctor: I know. When I look at her now I can see them. The hole they left, all the pain that filled it. I just don’t think I can face that every day.
Donna: It won’t stay like that. She’ll help you. We both will.
The Doctor: When they died that part of me died with them. It’ll never come back. Not now.
Donna: I’ll tell you something, Doctor. Something that I’ve never told you before: I think you’re wrong.

Jenny: Oh, that was close.
The Doctor: It’d be no fun otherwise.

Donna: But listen, I spent six months working as a temp in Hanslow Library and I mastered the Dewey Decimal System in two days flat—I’m good with numbers. It’s staring us in the face.
Jenny: What is?
Donna: It’s the date!

Jenny: What do you mean seven days?
The Doctor: Seven days since war broke out.
Donna: This war started seven days ago. Just a week.
Jenny: A week? They said years.
Donna: No, they said generations.

Martha: Is it me or can you smell flowers?
The Doctor: Yes. Bouganvillia. I say we follow our nose.

The Doctor: Two hearts. Two hearts like me. If we wait, we just wait.
Martha: There’s no sign, Doctor. There’s no regeneration. She’s like you, but…. maybe not enough.
The Doctor: No. Too much. That’s the truth of it. She was too much like me.

The Doctor to Cobb: I never would. Have you got that? I never would. to all: When you start this new world—this world of Human and Hath—remember that. Make the foundation of this society “a man who never would”.

The Doctor: Jenny was the reason for the TARDIS bringing us here. It just got here too soon. We then created Jenny in the first place. Paradox. An endless paradox.

Donna: How could I ever go back to normal life after seeing this? I’m going to travel with that man forever.