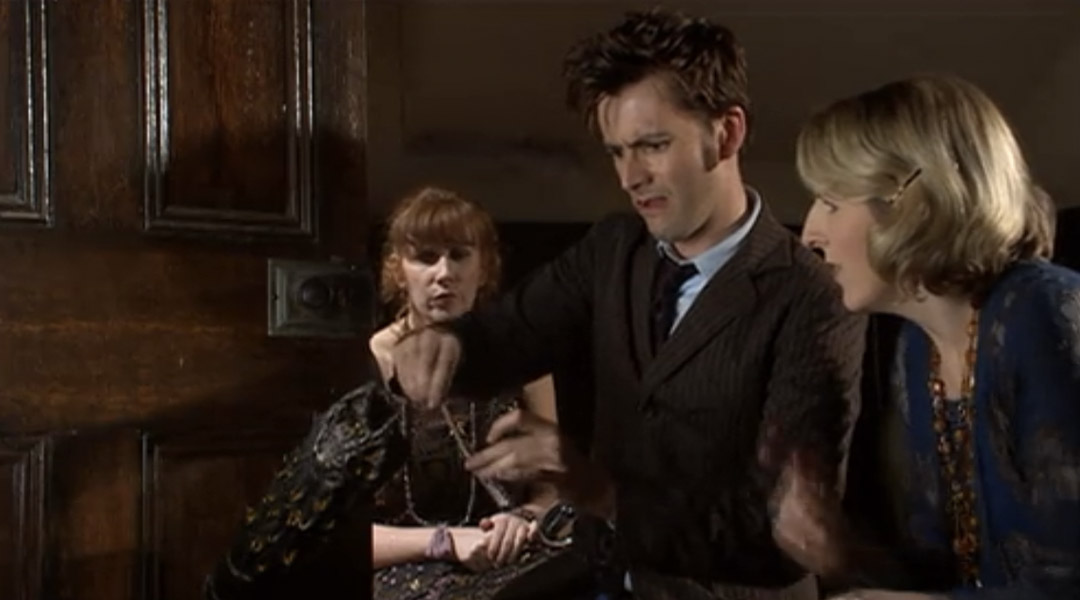 Donna: Never mind Planet Zog. A party in the 1920s, that’s more like it!
The Doctor: Trouble is, we haven’t been invited. {pulls out the slightly telepathic paper.} Oh I forgot! Yes we have.

The Doctor: Lady Eddison!
Lady Eddison (Felicity Kendal): Forgive me, but who exactly might you be? And, what are you doing here?
The Doctor: I’m the Doctor. And this is Miss Donna Noble. Of the Chiswick Nobles.
Donna: Good afternoon, my Lady. Topping day, wot? Spiffing! Top ho!
The Doctor: No no, no no. Don’t do that. Don’t. We were thrilled to receive your invitation, my Lady. We met at the Ambassador’s reception.
Lady Eddison: Doctor, how could I forget you? But one must be sure with the Unicorn on the loose.
The Doctor: A unicorn? Brilliant. Where?
Lady Eddison: The Unicorn. The jewel thief. And nobody knows who he is. He’s just struck again, snatched Lady Babbington’s pearls right from under her nose.
Donna: Funny place to wear pearls.

Roger Curbishley (Adam Rayner): All these young boys deserve a decent thrashing!
Davenport (Daniel King): Couldn’t agree more, sir.
Donna: Typical. All the decent men are on the other bus.
The Doctor: Or Time Lord.

Lady Eddison: Is Mr. Christie not joining us?
Agatha Christie: Is he needed? Can’t a woman make her own way in the world?

Roger: I have a question: why a Belgian detective?
Agatha: Belgians make such lovely buns.

The Doctor: Look at the date on this newspaper.
Donna: What about it?
The Doctor: It’s the day Agatha Christie disappeared.

The Doctor: She’d just discovered her husband was having an affair.
Donna: You’d never think to look at her. Smiling away.
The Doctor: Well, she’s British and monied. That’s what they do. They carry on. Except for this one time. No one knows exactly what happened, she just vanished. Her car will be found tomorrow morning by the side of a lake. Ten days later, Agatha Christie turns up at a hotel in Harrogate. Said she’d lost her memory. She never spoke about her disappearance ’til the day she died. But whatever it was—
Donna: It’s about to happen.
The Doctor: Right here, right now.

Agatha: Someone should call the police.
The Doctor: We don’t have to. Chief Inspector Smith from Scotland Yard. Known as The Doctor. Miss Noble is the plucky young girl that helps me out.

Donna: “The plucky young girl who helps me out.”
The Doctor: No policewomen in 1926.
Donna: I’ll pluck you in a minute.

The Doctor: Come on. You’re ever so plucky.

Miss Redmond (Felicity Jones): I was preparing myself. Positively buzzing with excitement about the party and the super fun of meeting Lady Eddy.
The Doctor: We’ve only got your word for it.
Miss Redmond: That’s your problem, not mine.

Agatha: The secret adversary remains hidden. We must look for a motive. Use “ze little grey cells.”
The Doctor: Oh yes. “Little grey cells.” Good ‘ol Poirot.
You know, I’ve been to Belgium. Yeah. I remember. I was deep in the Ardennes, trying to find Charlemagne. He’d been kidnapped by an insane computer…
Christie trying to snap him out of it: Doctor, Doctor.
The Doctor: Sorry.
Christie: Charlemagne lived centuries ago.
The Doctor: I’ve got a good memory.

Christie: For such an experienced detective you missed a big clue.
The Doctor: What, that bit of paper you nicked out of the fire?
Christie: You were looking the other way.
The Doctor: Yeah, but I saw you reflected in the glass of the bookcase.
Christie: You crafty man.

Christie: Can we return to sanity? There are no such things as giant wasps.
The Doctor: Exactly! So. The question is. What’s it doing here?

Donna: Okay, this makes a change. There’s a monster and we’re chasing it.
Christie: Can’t be a monster. It’s trick. They do it with mirrors.

The Doctor: There’s nowhere to run. Show yourself! {everyone pops out of their room.} Oh… that’s just cheating.

Miss Redmond: Surely you can crack it. These events, they’re exactly like one of your plots.
Donna: That’s what I’ve been saying. Agatha, that’s got to mean something.
Agatha: But what? I’ve no answers. None. I’m sorry, all of you. I’m truly sorry. But I’ve failed. If anyone can help us then it’s the Doctor, not me.

Agatha: Is my marriage the stuff of gossip now?
Donna: No, I just— Sorry.
Agatha: No matter. The stories are true. I found my husband with another woman. A younger, prettier woman. Isn’t it always the way?
Donna: Well, mine was with a giant spider but same difference.

The Doctor: Detox. I must do that more often! I mean the, the detox.

The Doctor: A terrible day for all of us. The professor struck down, Miss Chandrakala cruelly taken from us. And yet we still take dinner.
Lady Eddison: We are British, Doctor. What else must we do.
The Doctor: And then someone tried to poison me. Any one of you had the chance to put cyanide in my drink. But it rather gave me an idea.
Reverend Golightly (Tom Goodman-Hill): And what would that be?
The Doctor: Well. Poison. Drink up. I’ve laced the soup with pepper.
Colonel Hugh: Oh. I thought it was jolly spicy.

Donna: That poor footman. Roger’s dead, he can’t even mourn him. 1926, it’s more like the Dark Ages.

The Doctor: Plenty of people write detective stories, but yours are the best. Why? Why are you so good, Agatha Christie? Because you understand. You’ve lived. You’ve fallen, you’ve had your heart broken. You know about people. Their passions, their hope, despair and anger. All of those tiny huge things that can turn the most ordinary person into a killer. Just think, Agatha. If anyone can solve this, it’s you.

Colonel Hugh (Christopher Benjamin): Confound it, Mrs. Christie! How did you discover the truth?
Agatha: Um, actually I had no idea. I was just going to say you’re completely innocent.

The Doctor: Last Thursday night, those boys broke into your church.
Reverend Golightly: That’s correct. They did. I discovered the two of them. Thieves in the night. I was most perturbed. But I apprehended them.
The Doctor: Really? A man of God, against two strong lads. A man in his forties. Or, should I say, forty years old exactly.

The Doctor: You killed in this pattern because that’s what you think the world is. That’s how we are in the middle of a murder mystery. One of yours, Dame Agatha.
Agatha: Dame?
The Doctor: Oh. Sorry. Not yet.

Donna: How do you kill a wasp? Drown it. Just like his father.
The Doctor: Donna, that thing couldn’t help itself.
Donna: Neither could I!

The Doctor: She is the best selling novelist of all time.
Donna: But she never knew.
The Doctor: Well no one knows how they’re going to be remembered. All we can do is hope for the best. Maybe that’s what kept her writing. Same thing that keeps me travelling. Onwards?
Donna: Onwards.