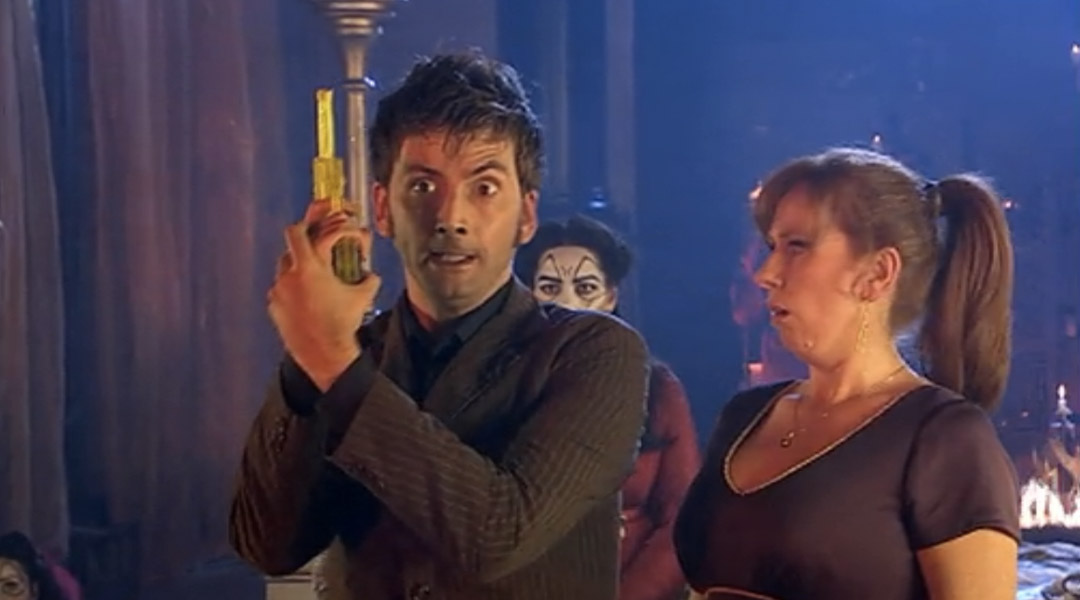 Donna: Hold on a minute. That sign over there’s in English. Are you having me on? Are we in Epcot?
The Doctor: No no no. That’s the TARDIS translation circuits. It just makes it look like English. Speech as well. You’re talking Latin right now.
Donna: Seriously? I just said “seriously” in Latin.
The Doctor: Oh yeah.
Donna: What if I said something in actual Latin? Like “Veni, vidi, vici.” My Dad said that when he came back from football. If I said “veni, vidi, vici” to that lot, what would it sound like?
The Doctor: I’m not sure. You have to think of difficult questions, don’t you?
Donna: I’m gonna try it.
Seller (Phil Cornwell): Afternoon, sweetheart. What can I get you, my love?
Donna: Um, veni, vidi, vici.
Seller: Huh? Sorry? Me no speak Celtic. No can do, missy.
Donna: Yeah. How’s he mean, “Celtic”?
The Doctor: Welsh. You sound Welsh. There we are. Learned something.

Donna: Don’t my clothes look a bit odd?
The Doctor: Nah! Ancient Rome, anything goes. Like SoHo. But bigger.
Donna: Have you been here before, then?
The Doctor: Mm. Ages ago. Before you ask, that fire had nothing to do with me. Well, a little bit.

Donna: Wait a minute. One mountain. With smoke. Which makes this—
The Doctor: Pompeii. We’re in Pompeii. And it’s Volcano Day.

Sister (Karen Gillan): It has come! As foretold in the prophecy. The Box. The Blue Box.

Donna: You’re kidding. Don’t tell me the TARDIS is gone.
The Doctor: Okay.
Donna: Where is it?
The Doctor: You told me not to tell you.
Donna: Oy. Don’t get clever in Latin.

Caecilius (Peter Capaldi): Modern art! shooing the movers. Out of the way, that’s it! Oh Rhombus, I’m a little bit peckish. Get me some ants and honey. There’s a good lad. Oo! Maybe a doormouse.

Caecilius: So where were you last night? Down at the thelopolium no doubt. Cavorting with Etruscans, Christians and all sorts.

The Doctor: Pompeii is a fixed point in history. What happens happens.

Reverend Mother (Victoria Wicks): If the Disciples of the Blue Box defy this prophecy their blood will run across the temple floor.

Metella (Tracey Childs): I told you to get rid of it.
Caecilius: I only bought it today.
The Doctor: Ah…. caveat emptor.
Caecilius: Oh, you’re Celtic. There’s lovely.

The Doctor: They don’t know what it is. Vesuvius is just a mountain for them, the top hasn’t blown off yet. The Romans haven’t even got a word for “volcano”. Not until tomorrow.
Donna: Oh great, they can learn a new word. As they die.
The Doctor: Donna, stop it!
Donna: Listen, I don’t know what sort of kids you’ve been flying around with in outer space but you’re not telling me to shut up. That boy—how old is he, 16? And tomorrow he burns to death.
The Doctor: And that’s my fault?
Donna: Right now, yes.

The Doctor: You must excuse my friend. She’s from… Barcelona.

Evelina (Francesca Fowler): They’re laughing at us. Those two. They use words like tricksters. They’re mocking us.
The Doctor: No no. I meant no offense.
Metella: I’m sorry, my daughter’s been consuming the vapors.
Quintus (Francois Pandolfo): By the gods, Mother. What have you been doing to her?
Caecillius: Not now, Quintus.
Quintus: Yeah, but she’s sick. Just look at her!
Lucius (Phil Davis): I gather I have a rival in this household. Another with the gift.
Metella: Oh, she’s been promised to the Sibylline Sisterhood. They say she has remarkable visions.
Lucius: The prophecies of women are limited and dull. Only the menfolk have the capacity for true perception.
Donna: I’ll tell you where the wind’s blowing right now, mate.
Lucius: The mountain god marks your words. I’d be careful if I were you.
The Doctor: Consuming the vapors, you say.
Evelina: They give me strength.
The Doctor: It doesn’t look like it to me.
Evelina: Is that your opinion. As a doctor?
The Doctor: I beg your pardon.

Lucius: The female soothsayer is inclined to invent all sorts of fables.
The Doctor: Oh, not this time, Lucius. No, I reckon you’ve been out-soothsayed.
Lucius: Is that so, Man from Gallifrey?

Lucius: Doctor, she is returning.
The Doctor: Who is? Who’s she?
Lucius: And you, Daughter of London. There is something on your back.
Donna: What’s that mean?

Quintus: Don’t tell my dad.
The Doctor: Only if you don’t tell mine.

Spurrina (Sasha Behar): The Noble woman. She spoke of a new prophecy. The fall of Pompeii.
Reverend Mother: Pompeii will last forever!
Spurrina: Then what must we do?
Reverend Mother: The false prophet must die. Sacrifice her!

The Doctor: No sign of him. Nice little bit of allons-y.

Metella: Doctor, or whatever your name is, you bring bad luck on this house.
The Doctor: I thought your son was brilliant. Aren’t you gonna thank him?

Spurrina (Sasha Behar): The false prophet will surrender both her blood and her breath.
Donna: I’ll surrender you in a minute. Don’t you dare.
Spurrina: You will be be silent.
Donna: Listen, Sister, you might have eyes on the back of your hands but you’ll have eyes in the back of your head by the time I’m finished with you. Let me go!
Spurrina: This prattling voice will cease forever!
The Doctor: Oh, that’ll be the day.

Spurrina: No man is allowed to enter the Temple of Sibyl!
The Doctor: Oh that’s alright. Just us girls.

Donna: They’re stone.
The Doctor: Exactly. The people of Pompeii are turning to stone before the volcano erupts. But why?
Reverend Mother/Pyrovine: This word, this image in your mind. This volcano—what is that?

Spurrina: Sisters, I see into his mind! The weapon is harmless!
The Doctor: Yeah, But it’s got a sting.
Donna: You fought her off with a water pistol. I bloody love you!

Metella: Sweetheart, can you see? Tell us. What’s going to happen?
Quintus: Leave her alone.
Evelina: I can see…
Metella: What is it?
Evelina: A choice. Someone must make a choice. The most terrible choice.

Donna: But if it’s aliens set off the volcano, doesn’t that make it alright? For you to stop it?
The Doctor: Still part of history.
Donna: But I’m history to you. You saved me. 2008. You saved us all. Why is that different?
The Doctor: Some things are fixed, some things are in flux. Pompeii is fixed.
Donna: How do you know which is which?
The Doctor: Because that’s how I see the Universe. Every waking second I can see what is, what was, what could be, what must not. That’s the burden of the Time Lord, Donna. And I’m the only one left.

Donna: Oh, you better hurry up and think of something. Rocky IV’s on his way.

The Doctor: Now then Lucius, my Lord Pyrovillian. Don’t get yourselves in a lava. to Donna Lava? Lather? No. But if I might beg the wisdom of the gods before we perish. Once this new race of creatures is complete, then what?
Lucius: My masters will follow the example of Rome itself. And our mighty empire bestraddling the whole of civilization.
Donna: But if you’ve crashed, and you’ve got all this technology, why don’t you just go home?
Lucius: The heaven of Pyrovillia is gone.
The Doctor: What do you mean “gone”? Where’s it gone?
Lucius: It was taken! Pyrovillia is lost! But there is heat enough in this world for a new species to rise.
The Doctor: Yeah, I should warn you. It’s 70% water out there.
Lucius: Water can boil. And everything will burn, Doctor.
The Doctor: Then the whole planet is at stake. Thank you. That’s all I needed to know.

Donna: Could we be anymore trapped?

The Doctor: But… that’s the choice, Donna. It’s Pompeii or the world.
Donna: Oh, my God.
The Doctor: If Pompeii is destroyed then it’s not just history. It’s me. I make it happen.

Donna: You can’t just leave them!
The Doctor: Don’t you think I’ve done enough! History’s back in place and everyone dies.
Donna: You’ve got to go back! Doctor, I’m telling you! Take this thing back! It’s not fair.
The Doctor: No it’s not.
Donna: But your own planet, it burned.
The Doctor: That’s just it! Don’t you see, Donna. Can’t you understand? If I could go back and save them then I would. But I can’t! I can never go back. I can’t. I just can’t.
Donna: Just someone. Please. Not the whole town. Just save someone.

The Doctor: It’s never forgotten, Caecilius. Oh, time will pass. Men will move on, and stories will fade. But one day, Pompeii will be found again. In thousands of years. And everyone will remember you.

The Doctor: You were right. Sometimes I need someone. Welcome aboard.
Donna: Yeah.