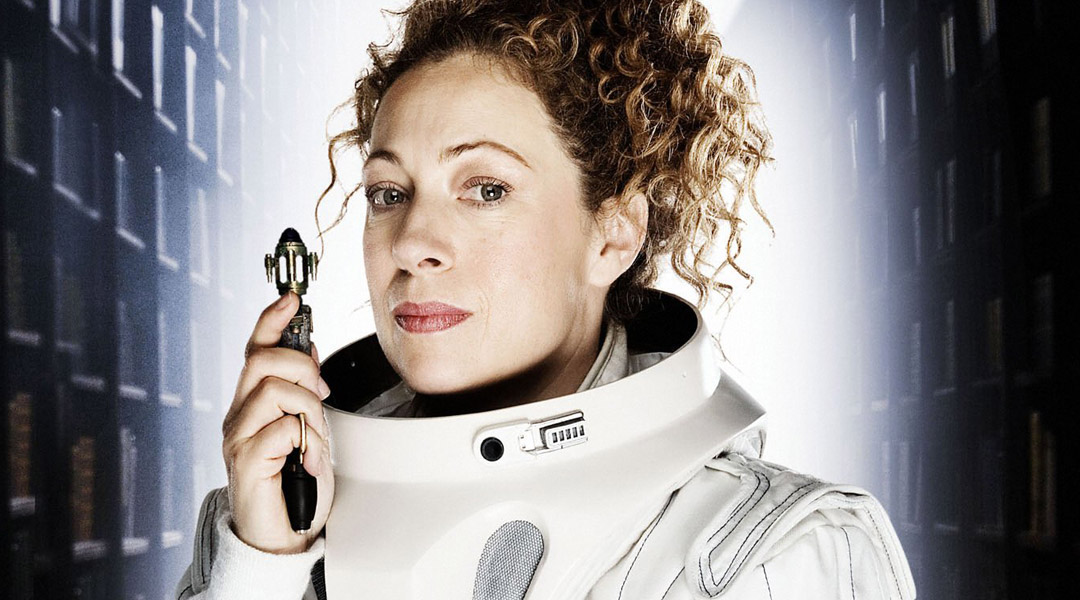 Silence in the Library

Donna: So we weren’t just in the neighborhood.
The Doctor: Yeah… I kind of sort of lied a bit. Got a message on the psychic paper. {The Library Come as soon as you can x}. What do you think? Cry for help?
Donna: Cry for help. With a kiss.
The Doctor: Well, we’ve all done that, yeah?
Donna: Who’s it from?
The Doctor: No idea.

Professor River Song (Alex Kingston): Hello Sweetie.
The Doctor: Get out!
Donna: Doctor?
The Doctor: All of you, turn around, get back in your rocket and fly away! Tell your grandchildren you came to the Library and lived. They won’t believe you.

Anita: How do you know they’re not androids.
River: Because I’ve dated androids. They’re rubbish.

Mr. Lux: Who is this? You said we were the only expedition. I paid for exclusives.
River: I lied. I’m always lying. Bound to be others.

River: You think there’s danger here?
The Doctor: Something came to this library and killed everything in it. Killed the whole world. Danger? Could be!
River: That was a hundred years ago. The Library’s been silent for a hundred years. Whatever came here is long dead.
The Doctor: Bet your life?
River: Always.

Lux: Professor Song, why am I the only one wearing my helmet?
River: I don’t fancy you.

River: Thanks.
The Doctor: For what?
River: The usual. For coming when I call.
The Doctor: That was you?
River: You’re doing a very good job acting like you don’t know me. I’m assuming there’s a reason.
The Doctor: Oh, a fairly good one actually.
River: Okay, should we do diaries then? Where are we this time? Ah, going by your face I’d say it’s early days for you, yeah? So, um… Crash of the Byzantium. Have we done that yet? {nothing} Obviously ringing no bells. Alright, um. Picnic at Asgard, Have we done Asgard yet? Obviously not. Blimey, very early days then. Oo! Life with a time traveller, never knew it could be such hard work. Um… {she stops} Look at you. You’re young.
The Doctor: I’m really not, you know.
River: Oh but you are. Your eyes! You’re younger than I’ve ever seen you.
The Doctor: You’ve seen me before then?
River: Doctor, please tell me you know who I am.
The Doctor: Who are you?

River: Sorry, you’re not allowed to see inside the book. It’s against the rules.
The Doctor: What rules?
River: Your rules.

Mr. Lux: I’m protecting my family’s pride.
The Doctor: Well, funny thing, Mr. Lux. I don’t want to see everyone in this room dead because some idiot thinks his pride is more important.
River: Then why don’t you sign his contract? I didn’t either. I’m getting worse than you.

River: There was a message from the library, just one: the light’s are going out. Then the computer sealed the planet and there was nothing for a hundred years.

River: There was one other thing in the last message.
Lux: That’s confidential.
River: I trust this man with my life. With everything.
Lux: You’ve only just met him.
River: Nope, he’s only just met me.

River: Whatever did this to her, whatever killed her, I’d like a word with that.
The Doctor: I’ll introduce you.

River: Donna? You’re Donna, Donna Noble?
Donna: Yeah? Why?
River: I do know the Doctor. But in the future. His personal future.
Donna: So why don’t you know me? Where am I in the future?

The Doctor: Where there’s meat there’s Vashta Nerada. You can see them sometimes. The dust in sunbeams.
Donna: If they were on Earth we’d know.
The Doctor: Nah! Normally they live on road kill. Sometimes people go missing. Not everyone comes back out of the dark.
River: Every shadow?
The Doctor: No. But any shadow.
River: So what do we do?
The Doctor: Daleks. Aim for the eyestalk. Sontarans. Back of the neck. Vashta Nerada. Run. Just run.
River: Run? Run where?
The Doctor: This is an index point. There must be an exit teleport somewhere.
Lux: Don’t look at me. I haven’t memorized the schematics.
Donna: Doctor, the little shop. They always make you go through the little shop on the way out so they can sell you stuff!
The Doctor: You’re right! Brilliant! That’s why I like the little shop!

View all quotes from Silence in the Library

Forest of the Dead

Dave: Who is he? You haven’t even told us. You just expect us to trust him.
River: He’s the Doctor.
Lux: And who is “The Doctor”?
River: The only story you’ll ever tell. If you survive here.
Anita: You say he’s your friend, but he doesn’t even know who you are.
River: Listen, all you need to know is this, I trust that man to the end of the Universe. And actually, we’ve been.
Anita: He doesn’t act like he trusts you.
River: There’s a tiny problem. He hasn’t met me yet.

River: What’s wrong with it?
The Doctor: There’s a signal coming from somewhere interfering with it.
River: Use the red settings.
The Doctor: It doesn’t have a red setting.
River: Well use the dampers.
The Doctor: It doesn’t have “dampers.”
River: It will do one day.
The Doctor: So some time in the future I just give you my screwdriver.
River: Yeah.
The Doctor: Why would I do that?
River: I didn’t pluck it from your cold dead hands if that’s what you’re worried about.
The Doctor: And I know that because?
River: Listen to me, you’ve lost your friend—you’re angry, I understand. But you need to be less emotional, Doctor. Right now—
The Doctor: Less emotion— I’m not emotional!
River: There are five people in this room still alive. Focus on that. Dear god, you’re hard work young.
The Doctor: Young— Who are you?!
Lux: Oh for heaven’s sake! Look at the pair of you. We’re all going to die right here and you’re just squabbling like an old married couple!
River: Doctor. One day I’m going to be someone that you trust. Completely. But I can’t wait for you to find that out. So I’m going to prove it to you. And I’m sorry. I’m really very sorry. whispers in his ear. Are we good? Doctor. Are we good?
The Doctor: Yeah, we’re good.
River: Good.

Anita: Professor. It’s important. I have two shadows.
River: Helmets on, everyone. Anita I’ll get yours.
Anita: Didn’t do Proper Dave any good.
River: Just keep it together, okay?
Anita: Keepin’ it together. I’m only crying. I’m about to die. It’s not an overreaction.

River: Oh god they’ve got inside!
The Doctor: No no. I’ve just tinted her visor. Maybe they’ll think they’re already in there, leave her alone.
River: You think they can be fooled like that?
The Doctor: Maybe, I don’t know. It’s a swarm. It’s not like we chat.

The Doctor: Professor, go ahead. Find a safe spot.
River: It’s a carnivorous swarm in a suit! You can’t reason with it.
The Doctor: Five minutes.

River: You know when you see a photograph of someone you know, but it’s from years before you knew them. It’s like they’re not quite finished—they’re not done yet. Well… yes, The Doctor’s here. He came when I called just like he always does. But not “my” Doctor. Now my Doctor, I’ve seen whole armies turn and run away. And he’d just swagger off, back to his TARDIS. And open the doors with a snap of his fingers. The Doctor. In the TARDIS. Next stop: Everywhere.
The Doctor: Spoilers. Nobody can open the TARDIS by snapping their fingers. It doesn’t work like that.
River: It does for the Doctor.
The Doctor: I am the Doctor.
River: Yeah. Someday.

River: Gravity Platform.
The Doctor: Bet I like you.
River: Oh, you do.

The Doctor: I’ll hook myself up to the computer, she can borrow my memory space.
River: Difficult. It’ll kill you stone dead!
The Doctor: Yes, easy to criticize.
River: It’ll stop both of your hearts and don’t think you’ll regenerate!
The Doctor: I’ll try my hardest not to die, honestly. It’s my main thing.
River: Doctor—
The Doctor: I’m right, this works. Shut up.

River: I hate you sometimes!
The Doctor: I know!

The Doctor: Oh no no. What are you doing? That’s my job!
River: Oh and I’m not allowed to have a career I suppose.
The Doctor: Why am I handcuffed? Why do you even have handcuffs?
River: Spoilers.

River: Funny thing is, this means you’ve always known how I was going to die. All the time we’ve been together you knew I was coming here. The last time I saw you—the real you, the future you, I mean—you turned up on my doorstep with a new haircut and a suit. You took me to Derillium. To see the Singing Towers. Oh, what a night that was. The towers sang, and you cried. You wouldn’t tell me why but I suppose you knew it was time. My time. Time to come to the Library. You even gave me your screwdriver. That should have been a clue. There’s nothing you can do.
The Doctor: Let me do this!
River: If you die here it’ll mean I’ve never met you.
The Doctor: Time can be rewritten!
River: Not those times, not one line. Don’t you dare! It’s okay. It’s okay. It’s not over for you. You’ll see me again. You’ve got all of that to come. You and me. Time and space. You watch us run!
The Doctor: River you know my name. You whispered my name in my ear. There’s only one way I would ever tell anyone my name. There’s only one time I could.
River: Hush now. Spoilers.

River in voiceover: When you run with the Doctor, it feels like it will never end. But however hard you try, you can’t run forever. Everybody knows that everybody dies. And nobody knows it like the Doctor. But I do think that all the skies of all the worlds might just turn dark if he ever, for one moment accepts it.

The Doctor: Stay with me. C’mon! You and me, one last run! Sorry River, shortcut.

River in voiceover: Everybody knows that everybody dies. But not every day. Not today.

River in voiceover: Some days are special. Some days are so so blessed. Some days nobody dies at all. Now and then, every once in a very long while—every day in a million days when the wind stands fair and the Doctor comes to call—everybody lives.

View all quotes from Forest of the Dead