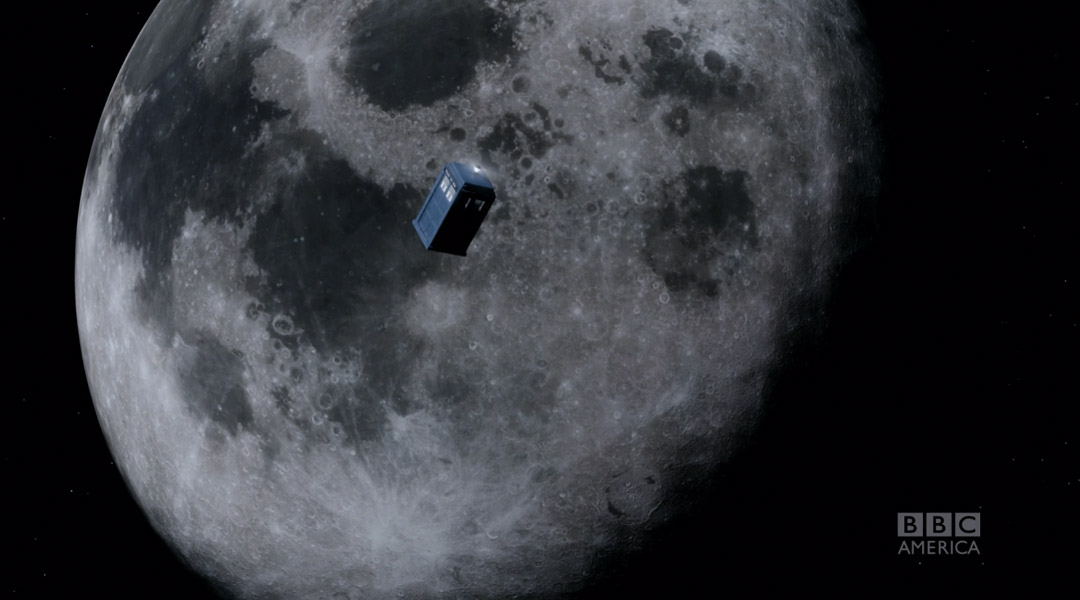 Clara: Hello. Hello. Hello, Earth. We have a terrible decision to make. It is an uncertain decision and we don’t have a lot of time. The man who… nromally helps, he’s gone. Maybe he’s not coming back. In fact… I really don’t think he is. We’re on our own. So… an innocent life versus the future of all mankind. We have 45 minutes to decide.

Clara: Courtney Woods. Doctor, she’s gone crazy. She’s uncontrollable. She took your psychic paper. She’s been using it as fake ID.
The Doctor: To get into museums?
Clara: No no no. To buy White Lightning or alcopops or whatever.
The Doctor: I’ve no idea what you’re talking about. What is Courtney Woods?
Clara: She’s one of my Year 10s. She was in the TARDIS.
The Doctor: Doing what?
Clara: Throwing up.
The Doctor: Oh her! That was ages ago.

Clara: Look, she says you told her she wasn’t special.
The Doctor: Rubbish.
Clara: She says that’s what sent her off the rails.

Courtney Woods (Ellis George): You can’t just take me away like that. It’s like you kicked a big hole in the side of my life. You really think it? I’m nothing. I’m not special.
The Doctor: How’d you like to be the first woman on the moon? Is that special enough for you.
Courtney: Yeah, all right.
The Doctor: Okay! Now we can do something interesting.

Clara: What are they?
The Doctor: About a hundred nuclear bombs. {beeping starts}
Clara: Ah… we’re on our way to the moon. Check that! We’re about to crash into it! Hold on!

The Doctor: We should all be bouncing around this cabin like fluffy little clouds, but we’re not. What is the matter with the moon?
Lundvik (Hermione Norris): Nobody knows.
Clara: Do you know what’s wrong with the moon?
The Doctor: It’s put on weight.
Lundvik: How can the moon put on weight?
The Doctor: Oh lots of ways. Gravity bombs, axis alignment systems, planet shellers.
Lundvik: So it’s alien.
The Doctor: Must be causing chaos on Earth. The tides will be so high that they will drown whole cities.
Lundvik: Yeah.
The Doctor: So what are you doing about it? {Lundvik grabs a case} This?
Lundvik: That’s what you do with aliens, isn’t it? Blow them up.

Lundvik: There was a mining survey. Mexicans. Something happened up here. No one knows what. That’s when the trouble began back there on Earth. High tide all at once. The greatest natural disaster in history.

The Doctor: Is that the best you could get?
Lundvik: Secondhand space shuttle. Thirdhand astronauts.

Courtney: We have guns?
Lundvik: Not unless you brought some.

The Doctor: They didn’t find anything.
Lundvik: Eh?
The Doctor: The Mexicans. They didn’t find any minerals on the moon at all. Nada. {looking at some printouts} Oh…
Clara: Oh?
The Doctor: Lines of tectonic stress.
Lundvik: That’s the Mare Fecunditatis, it’s been there since Apollo days. It’s always been there.
The Doctor: No no. These are much much bigger. {showing them} Sea of Tranquility. Sea of Nectar. Sea of Ingenuity. Sea of Crises.
Clara: Meaning?
The Doctor: Meaning, Clara, that the moon—this little planetoid that’s been tagging alongside you for a hundred million year, which gives you light at night, and seas to sail on—is in the process of falling to bits.

The Doctor: When I say run, run.
Lundvik: Who made you the boss?
The Doctor: You say run then!

Clara: Courtney!
Courtney: Kill 99% of all known germs.
The Doctor: Good stuff, Courtney. Just don’t try that at home, okay?
Clara: You all right?
Courtney: Why did I just fly? This is nuts.
The Doctor: Did you say germs? Oh my god, this is incredible.
Look at the size of it! It’s the size of a badger.
Clara: Doctor…
The Doctor: It’s a prokaryotic, unicellular lifeform with non-chromosomal DNA. Which, as you and me know… well not you and me. {to Courtney} Well you, certainly not. As you and me, yes, scientist, know. This is a germ! You flew because that 1.3 billion tons shifted. It moved! It’s an unstable mass.

Clara: Doctor, this is dangerous now.
The Doctor: It was dangerous before. Everything’s daneroud if you want it to be. Eating chips is dangerous. Crossing the road. It’s no way to live your life. Tell her! You’re suppsoed to be teaching her.
Clara: Look. I have a duty of care, okay. You know what that is?
The Doctor: ‘Course I know what duty of care is. What are you suggesting? {looking at Courtney} She’s fine! What are you, 35?
Courtney: Fifteen.

Clara: Why are you shutting her in? We don’t need to stay, do we?
The Doctor: Eh?
Clara: Well it’s obvious, isn’t it? The moon doesn’t break up.
The Doctor: How do you know?
Clara: Well because I’ve been in the future and the moon is still there. … I think. You know the moon is still there, right?
The Doctor: Maybe it isn’t the moon. Maybe it’s a hologram or a big painting. Or a special effect. Maybe it’s a completely different moon.
Clara: But you would know.
The Doctor: I would?
Clara: If the moon fell to bits in 2049 somebody would have mentioned it. It would have come up in conversation. So it doesn’t beak up. So the world doesn’t end. So let’s just get in the TARDIS and go!
The Doctor: Clara, there are some moments in time that I simply can’t see. Little eye blinks. They don’t look the same as other things. They’re not clear. They’re fuzzy. They’re grey. Little moments in which big things are decided. And this is one of them. Just now, I can’t tell what happens to the moon because whatever happens to the moon hasn’t been decided yet. And it’s going to be decided here and now. Which very much sounds as though it’s up to us.

Lundvik: Neither of you are going anywhere. I’ve lost my crew. We were the last astronauts.
This is the last shuttle, these are the last nuclear bombs. We’re the last chance for Earth and you’re staying to help me.
The Doctor: Decision made.

The Doctor: What is killing the moon?
Clara: How can the moon die though?
The Doctor: Everything does, sooner or later.
Lundvik: Can we save it?
The Doctor: Depends what’s killing it.

Lundvik: Doctor, if the moon breaks up, it’ll kill us all in about 45 minutes.
The Doctor: I agree. Unless something else is going on.
Lundvik: There’s no water on the moon.
The Doctor: It’s not water, it’s amniotic fluid. The stuff that life comes from.

The Doctor: I gotta go down there.
Clara: Doctor…
The Doctor: Back to your shuttle. Get your bombs ready. You. Get to the TARDIS. Get safe. Get Courtney safe. I will be back! {he leaps into the pit with the disinfectant}
Lundvik: Will he? Will he be back?
Clara: If he says so I suppose he will.

Clara: Where’s the TARDIS?
The Doctor: She’s in the shuttle, isn’t she. She’ll turn up.
Clara: Last time you said that she turned up on the wrong side of the planet!
The Doctor: You two have never gotten on, have you?

The Doctor: Well I had a little hypotheses. The seismic activity, the surface breaking up, the variable mass. The increase in gravity. The fluid! I scanned what’s down there. The moon isn’t breaking apart. Well actually it is beaking apart, and rather quicker—we’ve got about an hour and a half. But that isn’t the problem. It’s not infested.
Courtney: What are they, then? Those things.
The Doctor: Bacteria. Tiny tiny bacteria. Living on something very very big. Something that weighs about 1.3 billion tons. Something that’s living, something… growing.
Clara: Growing?

The Doctor: I think that is utterly beautiful.
Lundvik: How do we kill it?
Clara: Why do you want to kill it?
Courtney: It’s a little baby.
Lundvik: Doctor, how do we kill it?
The Doctor: Kill the moon? Kill the moon. Well, ah, you have about a hundred of the best man-made nuclear weapons—if they still work—if that’s what you want to do.
Clara: Doctor, wait—
Lundvik: Will that do it?
The Doctor: A hundred nuclear bombs. Set off right where they are, right on top of a living vulnerable creature? It’ll never feel the sun on its back.
Lundvik: And then what? Will the moon still break up? You said we had an hour and a half.
The Doctor: Well, there’ll be nothing to make it break up. There will be nothing trying to force its way out. The gravity of the little dead baby will pull all the pieces back together again. Of course it won’t be very pretty. You’d have an enormous corpse floating in the sky. You might have some very difficult conversations to have with your kids.

Lundvik: You wanna know what I took back from being in space? Look at the edge of the Earth. The atmosphere. That is paper thin. That is the only thing that saves us all from death. Every else—the stars, the blackness—that’s all dead. Sadly, that is the only life any of us will ever know.