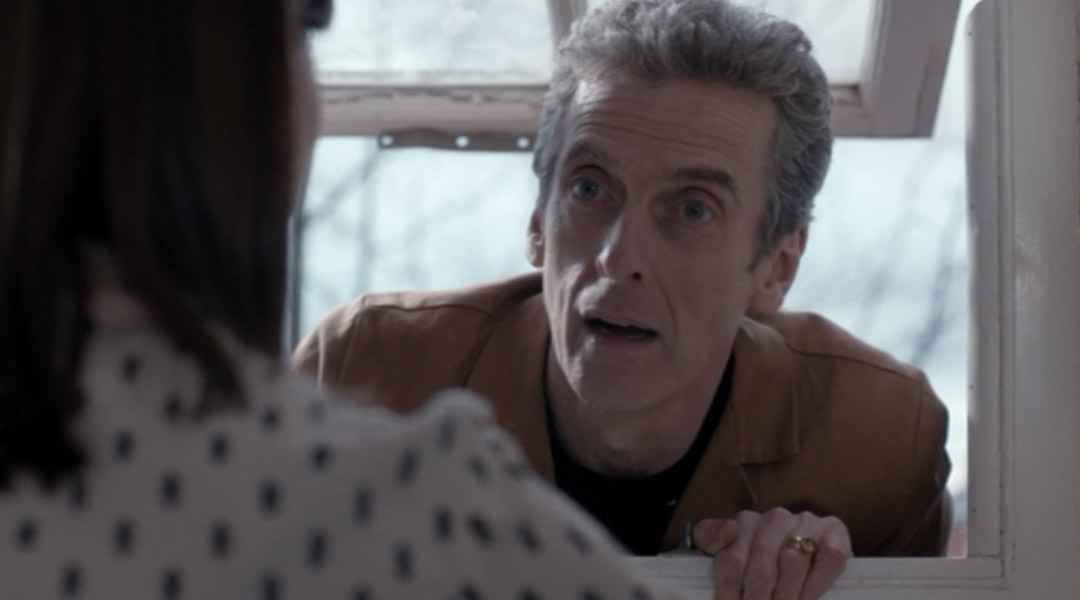 Clara: There’s no way out of this. We’re gonna die here.
The Doctor: Pass me the vibrocutters.
Clara: They’re in my pocket.
The Doctor: Come on, then. Pass them to me.
Clara: In my other jacket. At home.
The Doctor: Why have you got two jackets? Is one of them faulty?

Clara: We’re gonna starve to death out here.
The Doctor: Of course we won’t starve. The sand piranhas will get us long before that.

The Doctor: Clara, you look lovely today. Have you had a wash?
Clara: Why are you being nice?
The Doctor: Because it works on you.

The Doctor: Listen, I’m sorry but there’s going to be no trip today. I’m sorry, I’ve got to do a thing. It might take awhile.
Clara: What thing?
The Doctor: Just a thing.
Clara: You’re being mysterious. And do you know what that means?
The Doctor: I’m a man of mystery.
Clara: It means that you are a very clever man, making the mistake common to very clever people of assuming that everybody else is stupid.

Clara: Do they know?
Danny Pink (Samuel Anderson): Possibly. They’re children. It’s like they’ve got minds of their own. Are you okay?
Clara: Yeah, course I’m okay. Why wouldn’t I be okay?
Danny: I don’t know. Every time I see you it’s like you’re…
Clara: What?
Danny: In a rush. In a state. In a space helmet one time.

The Doctor: I’m the new caretaker. John Smith.
Danny: Welcome to Coal Hill, Mr. Smith.
The Doctor: Thanks. Yes, John Smith’s the name. But do you know, here’s the thing. Most people just call me “The Doctor.”

The Doctor as the teachers walk out: So if anybody needs me just give a shout. I’ll be in the storeroom just getting the lie of the land. Yes, nobody’s taking any notice at all. Absolutely good news because it means I must be coming across just as an absolutely boring human being just like you. Deep cover. Deep cover.

Danny: Do you know him?
Clara: Know who?
Danny: The Caretaker. John Smith. “The Doctor.”
Clara: Never seen him before in my life.
Danny: Bit intense looking. Did you see those eyebrows? Did he wink at you?
Clara: No, I think that was just sort of like a general wink, you know. He winked at everybody. It was like a general welcoming wink.

The Doctor: So you recognized me then.
Clara: You’re wearing a different coat!
The Doctor: You saw straight through that.

Clara: Where’s Atif? What have you done with him?
The Doctor: He’s fine. Hypnotized. He thinks he’s got the flu. Also a flying car and three wives. It’s going to be a rude awakening.

Clara: Doctor, is there an alien in this school?
The Doctor: Yes, me. Now go! The walls need sponging and there’s a sinister puddle.

Clara: You can’t do this. You cannot pass yourself off as a real person among actual people!

The Doctor: I lived among otters once for a month. Well, I sulked. River and I, we had this big fight—
Clara: Human beings are not otters!
The Doctor: Exactly. It’ll be even easier.

The Doctor: Jane Austen wrote Pride and Prejudice in 1796.
Clara: This is Mr. Smith, the temporary caretaker, and he’s a bit confused.
The Doctor: Not in 1797, because she didn’t have the time. She was so busy doing all the—
Clara: Oh, what? And I suppose, what, she was your bezzie mate, was she? And you went on holidays together and then you got kidnapped by boggons from space and then you all formed a band and met Buddy Holly!
The Doctor: No, I read the book. There’s a bio at the back.
Clara: Get down.
The Doctor: Boggons?
Clara: Go!

Clara: Excuse me, Mr. Pink. I think class 9M4 are waiting.
The Doctor: Yes, you’d better run along, Sergeant. That ball isn’t going to kick itself, is it?
Danny: I’m not a PE teacher, I’m a maths teacher.
The Doctor: Nope, sorry. No, I can’t retain that. I tried, it’s just not going in.

Clara: So. Pink. The name remind you of anything?
The Doctor: Yeah. The color.
Clara: Colonel Orson Pink. The guy we met at the end of the universe.
The Doctor: Oh yeah. Okay, yeah. Same name. Doesn’t look anything like him though.
Clara: Looks very like him.
The Doctor: Does he? I don’t know. Who remembers a PE teacher?

The Doctor: So. Is he here then?
Clara: Is who here?
The Doctor: The one that you keep going on serious dates with.
Clara: If he is are you going to start talking like a normal human being?
The Doctor: I promise I won’t. I’m being nice.

The Doctor: Can’t you read!
Courtney Woods (Ellis George): Course I can read. Read what?
The Doctor: The door. It says, “Keep out.”
Courtney: No, it says, “Go away humans.”
The Doctor: Oh, so it does. Never lose your temper in the middle of a door sign.

Courtney: What was you doing in there? What’s that box?
The Doctor: A caretaker’s box. Every caretaker has their own box.
Courtney: It says “Police.”
The Doctor: Exactly. There’s a policeman in there. In case of emergencies… and children.

Courtney: What was that green glow? There was a green glow coming from in there. What was it?
The Doctor: Of course there was. What’s a policeman without a death ray?

The Doctor: I’ve set up a circle of time mines around the school. Chronodyne generators. A bit unstable. I switch them on, the Blitzer gets sucked into the big old Time Vortex billions of years into the future. Dead easy, tiny bit boring. I’ll need a book and a sandwich.
Clara: And me. You’re not doing this alone.
The Doctor: I don’t need you this time. I’ll see you tomorrow. We’ll go somewhere nice. Ancient Egypt. Crocodilopolis. They worship a big crocodile there, so the name is a useful coincidence.

The Doctor: Go and canoodle with your boyfriend. {Clara stops} Come on. I wasn’t born yesterday. Far from it.
Clara: You did recognize him!
The Doctor: Possibly reminded me of a certain… dashing young time traveller.
Clara: Oh, of course you recognized him! I… sorry. Stupid. I, I underestimated you.
The Doctor: It’s easily done. It’s a lot to estimate.

The Doctor: Oh! Oh! Well done, PE! Brilliant work! “What’s this? A chronodyne generator? I’ll just deactivate that, shall I? I’ve got a swimming certificate. So that qualifies me to meddle with higher technology. Never mind that some people are actually trying to save the planet. Oh no! There’s only room in my head for cross country and the offside rule.”

Danny: Clara, why are you talking to him like that? Why are you using words like “chronodyne”? Was that thing a space thing? Oh my God, you’re from space. You’re a space woman. You said you were from Blackpool.
Clara: It’s a play! For the summer fête.
The Doctor: It’s a what?
Clara: Yes, it is a play. Shut up, it is a play.

Danny: Clara, are you going to explain any of this? Who is this guy?
Clara: The Doctor is…
The Doctor: Go on.
Danny: Yes, explain. Who is he? Why have you never mentioned him?
Clara: Because… he’s an alien.
Danny: Are you an alien?
Clara: Uh, no no no. I’m still from Blackpool. Me and the Doctor, we travel through time and space.

The Doctor: You’re sure hypnotizing’s not on the menu?
Clara: Yes.

Danny: We need to get help. This is an emergency.
The Doctor: Look, take him away. Shut him up. Shut him down. Up or down. It doesn’t matter to me. I’ve got a lot of work to do. {pointedly} Again!

The Doctor: Well you’ve explained me to him. You haven’t explained him to me.

Clara: What do you think? Say something.
Danny: So… there’s an alien. That used to look like Adrian… and… then he turned into a Scottish caretaker and every now and then when I’m not looking you elope with him.
Clara: I don’t elope.
Danny: Do you love him?
Clara: No.
Danny: Really had enough of the lies.
Clara: Not in that way.
Danny: What other way is there?
Clara: You know what I mean.
Danny: I don’t know what you mean. I know what you tell me, which isn’t always the truth.
Clara: Danny….
Danny: Why do you do it? Why do you fly off in the box with him? The truth. Please, just this once.
Clara: Because… it’s amazing. Because… I see wonders.
Danny: Okay.
Clara: What are you thinking?
Danny: There’s a good question. It’s funny, you only really know what someone thinks of you when you know what lies they’ve told you. I mean you say you’ve seen wonders, you’ve seen amazing things and, and you kept them secret. From me. So what do you think of me, Clara?

Danny: One thing Clara. I’m a soldier, guilty as charged. You see him? He’s an officer.
The Doctor: I am not an officer!
Danny: I’m the one who carries you out of the fire. He’s the one who lights it.

The Doctor clearly furious: On balance, I think that went quite well.

The Doctor: Humans. I never learn.

Courtney: Courtney Woods. Can I go in space?
The Doctor: I’ll let you know. I may have a vacancy.

Danny: But your gadget isn’t ready yet. Twenty-four hours you said.
The Doctor: Yes, well I’ve revised that down to two minutes.

Danny: It’s all right, it doesn’t matter. I don’t need him to like me. Doesn’t matter if he likes me or hates me, I just need to do exactly one thing for you. Doctor, am I right?
The Doctor: Yes.
Clara: What? What one thing?
Danny: I need to be good enough for you. That’s why he’s angry. Just in case I’m not.

Clara: Okay, tell me what you’re thinking.
Danny: I know men like him. I’ve served under them. They push you, make you stronger ’til you’re doing things you never thought you could. I saw you tonight, you did exactly what he told you. You weren’t even scared. And you should have been.
Clara: I trust him. He’s never let me down.
Danny: Fine. If he ever pushes you too far, I want you to tell me, because I know what it’s like. You’ll tell me if that happens, yeah?
Clara: Yeah. It’s a deal.
Danny: No, it’s a promise.
Clara: Okay, I promise.
Danny: And if you break that promise, Clara, we’re finished.
Clara: Don’t say that.
Danny: I’m saying it because… if you don’t tell me the truth I can’t help you. And I could never stand not being able to help you. Are we clear?
Clara: Yes. We’re clear.

CSO Matthew: It was mad, it was like in a film or on the telly. Like with science fiction guns.
Seb (Chris Anderson): Skovox Blitzer, sounds like. We’ve had a few in from that. I wouldn’t feel too bad.
CSO Matthew: If I hadn’t… if I hadn’t… Hang on. That doesn’t make sense.
Seb: Makes perfect sense to me.
CSO Matthew: How did I escape? I don’t remember how I got away.
Seb: Well I was coming to that. I’m afraid you really rather didn’t.
CSO Matthew: Then how did I get here?
Seb: Well. Big question.
CSO Matthew: Where am I?
Seb: What name would you like? There’s a range. The afterlife. The Promised Land. I’m partial to the Nethersphere.