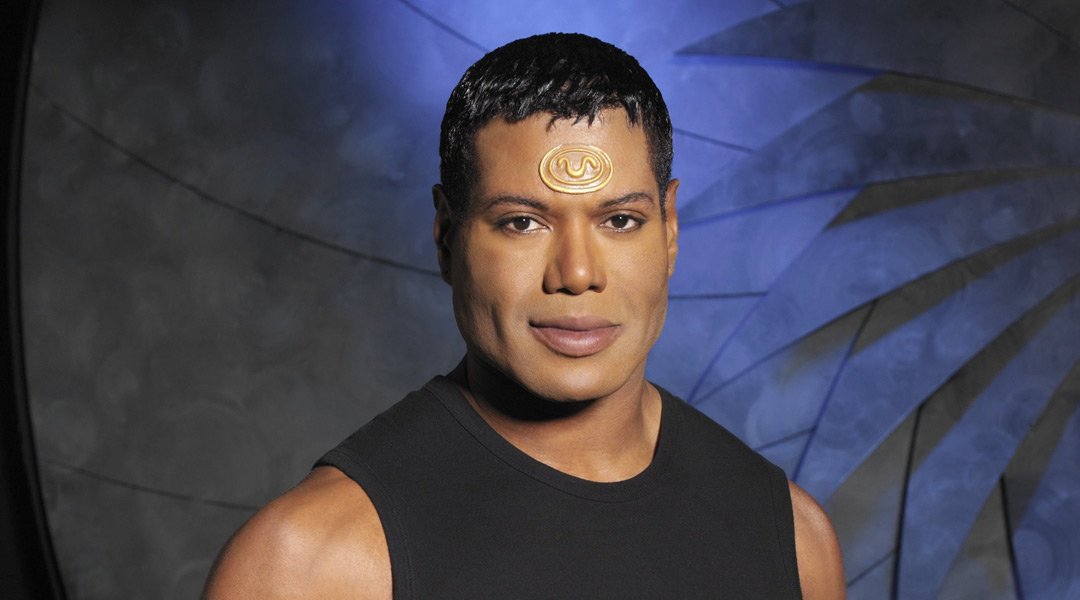 Teal’c: Where is the rest of your team, Colonel Mitchell?
Mitchell: Actually it’s still kind of SG-Me.

Mitchell: Merlin. King Arthur and the Knights of the Round Table Merlin?
Jackson: Yes.
Mitchell: Was an ancient.
Jackson: I think so.
Mitchell to Teal’c: See! That is what I’m talking about.

Vala to Teal’c: Give it a try, Muscles. I’ll give you half.

Rak’nor: I did not fight for the freedom of all Jaffa only to have it corrupted by a few power-hungry individuals.
Teal’c: Nor did I.

The Ties That Bind

The Powers That Be

Teal’c: Brothers and sisters, we finally have the opportunity to govern with authority and respect. Years ago that seemed unthinkable. But now we are in a position to help others who are in need of our support and guidance.
Gerak: Why should we help them?
Mitchell: How about because… it’s the right thing to do.

Teal’c: What do you know of the Jaffa we discovered?
Ka’lel: He lost his life trying to secure Gerak’s prize.
Teal’c: Of what prize do you speak?
Ka’lel: Ba’al.

Teal’c: Of equal concern are Gerak’s Jaffa. We have no control over them. If they decide to move on Ba’al, Earth will face Ba’al’s full reprisal.
Mitchell: And I’m guessing those Jaffa aren’t exactly kicking it back at the local Denny’s.

Carter: No tattoo.
Teal’c: He is a warrior of the Sodan.
Jackson: According to legend, no Sodan has been indentured to a Goa’uld for over five thousand years.
Carter: So your intell was correct?
Teal’c: Indeed.

Bra’tac: Gerak has proposed that the religion of the Ori should be adopted by all Jaffa.
Teal’c: As law?
Bra’tac: To be taught to our children. Its benedictions and traditions followed to the letter. Should it be ratified by the council, all Jaffa will have no choice but to accept the Ori as Gods.
Teal’c: True belief cannot be legislated.

Teal’c: Gerak is a fool and he must be revealed as such.
Bra’tac: Gerak is many things, but he is no fool.

Teal’c: Why are you hesitating, Gerak?
Gerak: If I help you, I will die. But I will die free!

Varta (William Atherton): I understand Dr. Marell and Dr. Amuro were able to determine that the memory was an implant. I must say, I’m relieved. A trial could have been extremely detrimental to relations between our worlds.
Teal’c: Not to mention inconvenient for Colonel Mitchell.

Teal’c: Up to this point the particulars of the varying universes have remained remarkably similar.
Landry: That’s what I wanted to talk to you about. Another SG-1 came through twenty minutes ago, which puts the count at twelve teams not including yourselves.
Jackson: Well at we’re in good company.
Landry: This last team is a little different in terms of personnel.
Teal’c: How so?
Landry: Well there’s someone I thought you might like to talk to.

Camo Uniform Janet Fraiser (Teryl Rothery): Daniel? Teal’c? Where’s General O’Neill?
Landry: I’m sure you all have a lot to catch up on.

Black Uniform Mitchell: So let me get this straight, we figured that you guys would try to escape and set this trap for you, not realizing that you’d figure out that we’d figure you out and set your own.
Teal’c: Indeed.

Mitchell: Blue squadron, this is blue leader. Break off the attack and scramble formation between the Prometheus and the weapon. Maybe one of us will get lucky and take a portion of the next shot.
Teal’c: I would not consider that lucky, Colonel Mitchell.
Mitchell: Well it could be for anybody aboard the Prometheus.

Carter: What did you say to them?
Mitchell: Look, obviously it didn’t go so well.
Teal’c: I did advise that you were a most unlikely drug smuggler, Colonel Mitchell.
Mitchell: Can we please just fall back to the Gate?

Jackson: What the hell was that?
Mitchell: What was what?
Carter: We’re supposed to stay under the radar.
Teal’c: I doubt if this world possesses such technology.

Mitchell: I have no intention of taking anybody on. I’m just going to pose as a buyer.
Jackson: You?
Mitchell: Well no offense, Jackson, but you do not strike me as the drug dealer type. In fact you’re not even close.
Jackson: I think I’m as close as you are.
Carter: Come on, you’re miles away.
Mitchell: Teal’c, which one of us is closer?
Teal’c: I believe the three of you to be equidistant.
Mitchell: Oh please! Mary Poppins is not even in the running.
Carter: Hey!

Mitchell: I think we’re good to go.
Teal’c: Perhaps we should keep any unnecessary conversation to a minimum.
Mitchell: Okay.

Jackson: So. We still doing movie night?
Carter: Yeah. Why not.
Mitchell: Good. I already picked something out.
Teal’c: Old School?
Mitchell: Starship Troopers.
Teal’c: Is it humorous?
Mitchell: Is it ever.

Teal’c: And you are certain you will not be injured?
Mitchell: Absolutely. Hey, take your best shot if you don’t— {Teal’c takes a swing at him}
Teal’c: Good luck, Colonel Mitchell.
Mitchell: Hey, did you even think twice about that?
Teal’c: I did not.
Mitchell: Huh.

Vala: I am absolutely terrified. Have any of you ever heard of anything like it?
Mitchell: Well there’s one.
Teal’c: Darth Vader.
Vala: Really? How did that turn out?

Teal’c: Given your narrow victory over the knight in the Avalon cave, it would seem that your over-confidence is ill-advised.
Mitchell: Did I say anything about me doing the fighting?

Jackson: Merlin could see the future because he actually aged backwards in time. It’s not meant to be taken literally, but we have seen a lot of legends and folklore have a strong basis in fact. Avalon. Atlantis.
Teal’c: The Easter Bunny.
Jackson: I guess there’s a few exceptions.