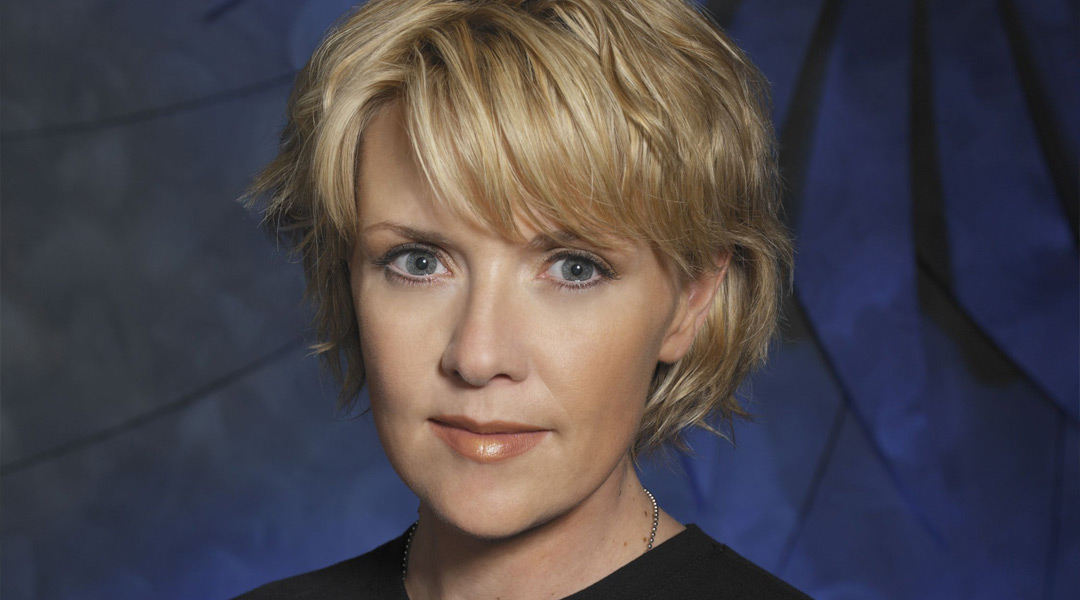 Mitchell: Listen, Sam, come back and rejoin SG-1.
Carter: I heard you’d been given command. Congratulations.
Mitchell: I’m not kidding. You can keep an eye on R&D in your spare time just like you always have. Besides Dr. Lee is pouting because you got the post over him.
Carter: Really.
Mitchell: No, I made that up.

Jackson: Well, temporary or not, it’s good to have you back.
Mitchell: How good is this? Got the band back together!
Carter about Vala: So what’s with the extra back-up singer?

Carter: She did it. The gate’s been destroyed.
Jackson: Did Vala make it back on board?
Airman: Negative, sir.

Carter: A matter stream left the cargo ship just before it exploded. There’s at least a slight chance that it was pulled into the singularity.
Jackson: So you’re saying she could be alive somewhere in the Ori galaxy?
Carter: It’s possible.
Jackson: Well. We wanted to send them a message.

Jackson: Where are you gonna be?
Carter: Seattle.
Barrett: How the hell are you going to get there. {She beams out}. Prometheus.
Jackson: Beats flying coach.

Carter: No tattoo.
Teal’c: He is a warrior of the Sodan.
Jackson: According to legend, no Sodan has been indentured to a Goa’uld for over five thousand years.
Carter: So your intell was correct?
Teal’c: Indeed.

Landry: If there’s something wrong with this Gate, I want to know what it is before anyone else walks through it.
Carter: Yes sir.
Landry: Find the problem. Until we do, all Gate activity is shut down.

Carter: Huh. Maybe it wasn’t our fault.
Jackson: I thought it was always our fault.

Carter: Instead of using an iris like we do, the off-world gate stores incoming data in its buffer system. Then if the correct code isn’t received, it dials a random address and empties the buffer into the new wormhole.
Mitchell: Interstellar call-forwarding. That’s pretty cool.

The Fourth Horseman : Part One

Landry: Colonel Carter! I’ve read your proposal.
Carter: And?
Landry: And, I’m not exactly sure what an aneurysm feels like, but I suspect I’m pretty close.

Dr. Lee: A couple of days?
Carter: Well, we’ll just have to roll up our sleeves and burn some midnight oil if we have to.
Dr. Lee: “Midnight oil”. Why didn’t you just tell them we’d come up with a viable means of creating cold fusion while you’re at it.
Carter: Sure, if you’ve got something.

Orlin: You’re so close.
Carter: I know.
Orlin: Hello Sam. It’s good to see you again. I’ve missed you.
Carter: Who are you?
Orlin: I had no choice but to take this form. It’s me, Orlin.

Jackson: Are you saying that the Ori don’t offer their followers ascension?
Orlin: No. Most certainly not. Then they’d have to share.
Landry: Share what?
Orlin: The power they sap from those who worship them.
Carter: How is that possible? I mean, are you saying there’s a real, physical transfer of energy to the Ori that occurs simply through a human being’s belief in them?
Orlin: “Simply” is not how I would put it. It’s quite complicated, but possible. And for it to have a measurable effect, it requires massive numbers of humans relinquishing their will. Nevertheless, it is one of the main reasons the Ancients have so strongly believed in strict non-interference in the lower planes.
Jackson: Because the temptation to manipulate and align lower lifeforms in some order for your own purposes could result in exactly this type of abusive corruption.
Orlin: The Ori empower themselves by sapping the life force of those willing to surrender themselves to them.
Jackson: Unknowingly. And this promise of salvation in return—
Orlin: Leads to nothing but death of the most meaningless kind.

Carter: Do the Priors know this? I mean are they complicit?
Orlin: No. They are merely pawns. The more worlds the Priors convert, the more powerful the Ori become. They must be stopped.
Landry: Why don’t the Ancients, uh.. Alterans, whatever you call yourselves now. Why don’t you stop them?
Orlin: I am one of them no longer, and even if I was, it is unclear whether such action would result in victory. Nor is such an endeavor at that level necessarily the next best step to further enlightenment. All I can say for sure is that if this galaxy were to succumb and bow to the Ori, it would be very bad for everyone.

Landry: We’re hoping that as long as you’re here, you may be able to help us.
Orlin: I no longer possess the power to simply cure this plague as I could have as an ascended being. However, with the knowledge I still retain, I believe I can synthesize a cure using your medical technology.
Carter: You built a stargate in my basement with spare parts from a toaster.
Orlin: Actually, this’ll be a little harder than that.

Carter: How’s it going?
Orlin: Basically, I know what I need to make. I just don’t have any of the right materials or tools.
Carter: This is the best we have. I can get you a toaster if you need it.
Orlin: Not unless you’re hungry for toast.
Carter: Waffle iron?

Carter: Orlin, by not letting go of the Ancient knowledge you’re damaging your brain.
Orlin: Yes. My human brain is failing under the weight of so much information.
Carter: You knew this would happen, didn’t you?

Landry: We need to set up a meeting.
Carter: No need, sir. We’ve already been invited back for a reception in honor of the scientists who developed the implant technology.
Mitchell: I’m hoping there’ll be dancing. Sir.

Carter: The multiverse theory of quantum physics posits the existence of parallel universes. An infinite number of ever-growing alternate realities that exist concurrently with our own. The theory holds that anything that can happen, will happen. If not in this reality then in another.
Mitchell: So you’re saying that somewhere, in an alternate universe, I got to second base with Amy Vandenberg?
Carter: Theoretically, yes.
Mitchell: Boggles the mind, don’t it!

Jackson: Okay, say for example we accept the possibility that this is an alternate SG-1 from a… parallel universe. how did they get here?
Carter: I got nothing. Yet.

Carter: As we discussed the situation, we realized we could pinpoint the source of the phenomenon to a precise window. Specifically the interim journey between the two gates.
Mitchell: Did she just say “we”?
Carter: Pardon me?
Jackson: She said “we”. You said “we”?
Carter: Ah, me and… myself, I suppose. The other Samantha Carter.
Mitchell: Right. Finally someone who can keep up with you, huh?
Carter: Yep.

Mitchell: You know, I’ve read all the mission reports on the Asgard, they’re not what I expected.
Carter: What were you expecting?
Mitchell: Well… pants, for one.

Camo Uniform Martouf: It was nice working with you again, Sam. Your presence has been sorely missed on our team.
Carter: Just out of curiosity, where did I go?
Camo Uniform Fraiser: Maternity leave.

Carter: You go. We got your back.
Mitchell: You sure about that?
Carter: Am I going to be able to stop you?
Mitchell: I don’t think so. I’m in a bad mood today.

Carter: What did you say to them?
Mitchell: Look, obviously it didn’t go so well.
Teal’c: I did advise that you were a most unlikely drug smuggler, Colonel Mitchell.
Mitchell: Can we please just fall back to the Gate?

Jackson: What the hell was that?
Mitchell: What was what?
Carter: We’re supposed to stay under the radar.
Teal’c: I doubt if this world possesses such technology.

Mitchell: I have no intention of taking anybody on. I’m just going to pose as a buyer.
Jackson: You?
Mitchell: Well no offense, Jackson, but you do not strike me as the drug dealer type. In fact you’re not even close.
Jackson: I think I’m as close as you are.
Carter: Come on, you’re miles away.
Mitchell: Teal’c, which one of us is closer?
Teal’c: I believe the three of you to be equidistant.
Mitchell: Oh please! Mary Poppins is not even in the running.
Carter: Hey!

Carter: What did you say to them?
Mitchell: Look, obviously it didn’t go so well.

Chapman: I think we can assume the bugs got off the base.
Carter: They must be using their echo location as a means to hunt their prey.
Jackson: Us. She means us.

Carter: Mr. Woolsey. If I could go back in time—which, admittedly, is an opportunity I’m occasionally presented with—I would have made sure that we left the base as scheduled. But the reality is for the time being we are stuck here. Trapped in this cave, surrounded by predatory insects, with no way of getting to the Stargate. Now I’m sorry, but I’m going to have a hard time mustering up a convincing pep talk. All things considered.
Woolsey: I see.

Jackson: So. We still doing movie night?
Carter: Yeah. Why not.
Mitchell: Good. I already picked something out.
Teal’c: Old School?
Mitchell: Starship Troopers.
Teal’c: Is it humorous?
Mitchell: Is it ever.

Carter: Try picking up that coffee cup. {Mitchell’s hand passes through it} Oh boy. We need to find Daniel.

Mitchell: Roast beef. The one time I can’t eat and they serve roast beef. Do you know how many times I’ve requested roast beef?! This is torture.
Carter: It’s only been a few hours.

Landry: So why would Merlin build a device that would transport him to another dimension?
Mitchell: Oo! Today’s daily double.
Jackson: Yeah, that’s the part I haven’t quite figured out yet.
Mitchell: Close!
Jackson: But at least it points to the possibility that both Colonel Mitchell and Colonel Carter may still be somewhere here on this base. {Mitchell indicates a touchdown}. We just can’t see or hear them.

Mitchell: And I ask this not one hundred percent sure I want to know the answer. But whose baby is it?
Vala: That’s the thing. I don’t know.
Carter: As in… ?
Vala: I swear. I did… none of the necessary things. Between my arrival in the Ori galaxy and my wedding night—which was definitely after I knew for sure—there is no way, humanly possible that I know of, that I could have gotten pregnant.

Carter: Well this certainly looks like a place where Merlin might have lived.
Mitchell: I wouldn’t get too excited just yet. There could be dozens of villages in the area just like this one. No way to know for sure this is the right one.
Jackson: Well there’s… that. {indicates a sword in a stone}

Antonius: Welcome to Camelot. The past and future home of King Arthur and his Round Table.
Carter: Sorry. Future home?
Meurik: I assume you know the history of the battle of Camelot.
Jackson: Of course. Where Arthur was mortally wounded by Mordred.