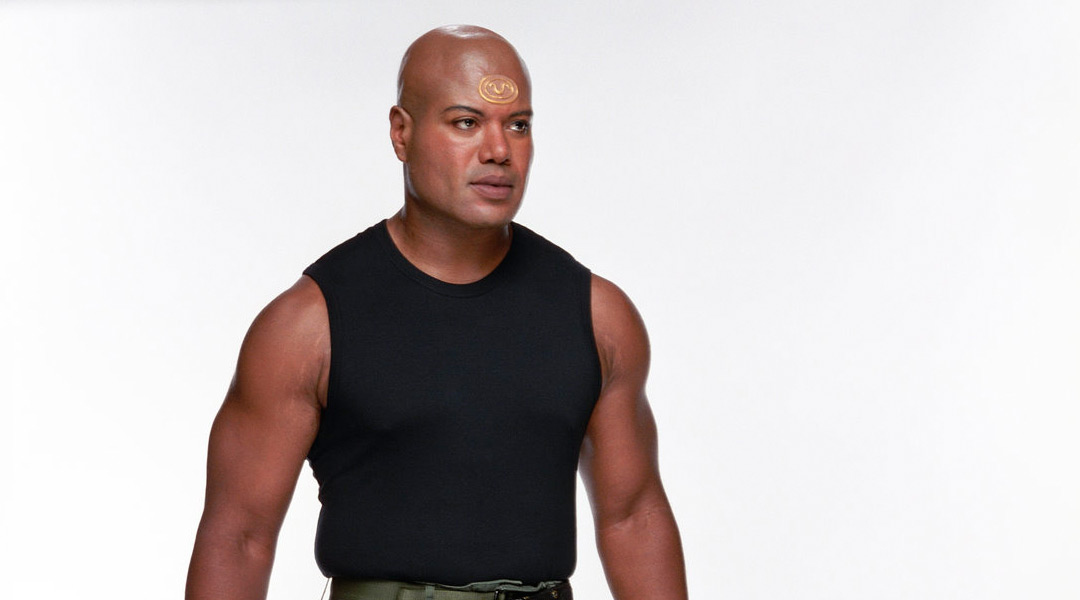 Teal’c: I have never ceased to be in the service of my god.
O’Neill: Alright. That’s sounding a little brainwashy.

Teal’c: It is good to see you, O’Neill.
O’Neill: You too.
Teal’c: You appear to be well.
O’Neill: Well. Forget appearances. The back’s gone, the knee’s shot. Forget curling.

Bra’tac: The rite has succeeded. He has returned to us.
O’Neill: Ah, just out of curiosity, how do you feel about—
Teal’c: Apophis is a false god. A dead false god.
O’Neill: Good enough for me.

O’Neill: So. Now what?
Teal’c: I have read of a place where humans do battle in a ring of Jello.
O’Neill: Call Daniel.

Hammond: Report, Major.
Carter: We were attacked by several Jaffa. Lieutenant Tyler went down covering our six and Colonel O’Neill went back for him.
Teal’c: We must assemble a rescue team and return to the planet immediately, General Hammond.
Hammond: Hold on. Who’s Lieutenant Tyler?
Jackson: What do you mean, “Who’s Lieutenant Tyler”? He’s a member of SG-1.
Hammond: What?
Jackson: You assigned him yourself last month, sir.
Carter: Tyler, sir. We’ve been training him for weeks. This was his third mission.
Hammond: Major I have no idea what you’re talking about.

Teal’c: If I were still loyal to the Goa’uld you would know it.
Colonel Simmons: Really?
Teal’c: It would be immediately apparent as I would not hesitate to kill you where you sit.

Teal’c: Lieutenant Tyler is not who he appears to be.
O’Neill: I know. He told me. Stand down.

Jackson: These men, whoever they are, abducted the unas I refer to as Chaka.
Carter: That’s the one that kidnapped you.
Jackson: Same one.
Jackson: Their dress indicates pre-industrialization, but they don’t seem to have any Jaffa tattoos, so the presence of Goa’uld weaponry seem contradictory.
Teal’c: Indeed.

O’Neill: This was supposed to be a rescue mission.
Teal’c: It would appear there is no one left to rescue.
Jackson: I wouldn’t say that.

O’Neill: This is what you’re wearing?
Faxon: What’s wrong with it?
Teal’c: Nothing.
Carter: You look fine.

Teal’c: Have you discovered something, Daniel Jackson?
Jackson: Oh god, I hope not. Probably though.

Dr. Tanner: Colonel, please. You know as well as I do they’re never going to leave us alone. There’s nothing for us here. It’s time for us to go.
O’Neill: You officially owe me one.
Alien: What about Martin?
Teal’c: I believe Martin Lloyd has chosen a new path.
Martin: We’re gonna win an Emmy for this! … Visual effects category.

Carter: Teal’c, as far as you know what just happened?
Teal’c: I have my revenge. Tanith is dead.
O’Neill: That’s nice. I’m happy for you.

O’Neill: What was that?
Teal’c: I’m having difficulties with the sublight engines.
O’Neill: Yes you are.

Carter: Sublight drive is down.
Teal’c: As are shields and communication.
Jackson: A lot easier to list what is working.
O’Neill: Bomb?
Carter: It’s good to go, sir. If it comes right down to it, we can detonate it right here. What’s our position?
Jackson: Well, personally, I’m against it. If you want to know where the ship is, we’re about five meters above the surface at the bottom of the crater.

O’Neill: I’m not going to recommend an alliance. Not as long as he’s in charge.
Teal’c: Let us speak of this when I return, O’Neill.
O’Neill: I don’t think so. Because if you do this, I don’t think you’re coming back.

Bra’tac: Our time will come, old friend. But not this day.
Teal’c: Indeed.

Teal’c: The Sentinel was indeed a device with great power. It would be wise to ask the Latonans to study it further.
O’Neill: Oh I think I know what they’d say.

Carter: So maybe Daniel has achieved something of great cosmic significance. I don’t know. And to be honest with you right now I don’t really care. I’d rather have him back.
Teal’c: As would I.

Thor: The Goa’uld are attempting to download the information stored in my pre-frontal cortex. It is only a matter of time before they break through my mental defenses.
O’Neill: Yeah well, you know. Love to help you, but we’ve got our own problems here.
Thor: I am aware of your situation. I believe I can rewrite some minor subroutines in the security protocol.
Teal’c: To what end? {the doors open}
O’Neill: Sweet.

Teal’c: Perhaps we should take them all.
O’Neill: Here’s a thought. {he shoots the crystals}