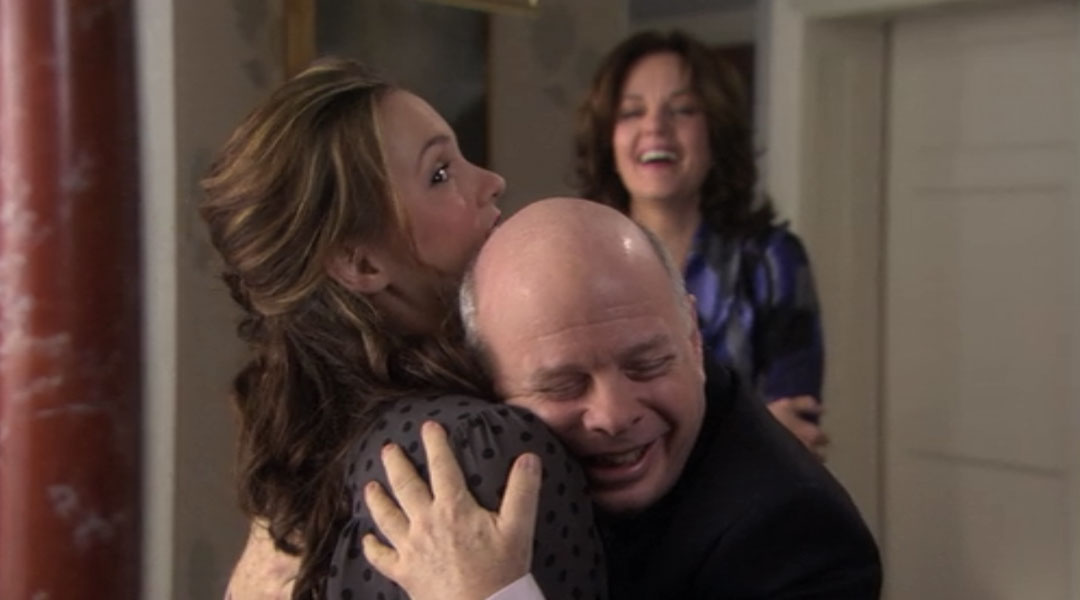 Dan: I’m amazed at how calm you’re acting. Your fifteen year old daughter just moved in with her crazy model friend.
Rufus: And with the model’s mother. Whom I met today for lunch. And granted Agnes’ mother is a little more Courtney Love than June Cleaver, but she’s a committed parent. She’s gone through similar phases with Agnes. She promises to call everyday. So Jenny’s safe.

Blair: Though it seems like just yesterday Serena and I were eight and playing dress-up in my mother’s vintage Manolos, my eighteenth birthday has finally arrived. So blood orange martinis or blue curaçao Belvedere?
Hazel (Dreama Walker): Why don’t we make drinks tonight and do a taste test?
Blair: Oh I can’t. I’m meeting my mother’s new boyfriend.
Hazel: Even moms have a boyfriend. And I don’t.
Blair: Cyrus has been one of my mom’s attorneys since the divorce. He asked her out when they first met but she didn’t want to mix business with pleasure. Finally his amorous overtures wore her down and she agreed to dinner. She’s been smitten ever since. One thing my mom has is good taste in men. Maybe a dashing step-dad is just what I need.

Gossip Girl: Spotted: S and A bringing sexy back to Times Square. Move over Disney, 42nd Street is steaming up.

Blair: I called you like ten times last night. Where have you been?
Serena: I went to the dentist at lunch. And yesterday I met Aaron in Times Square. B, it was the most romantic thing—
Blair: Who cares about plaque or pretentious artists when your best friend’s having a meltdown. He’s totally unsuitable.
Serena: Who is?
Blair: Cyrus. He’s five feet tall. He has a catchphrase. And he’s a hugger. I was expecting Cary Grant and I got Danny Devito!
Serena: That sounds… um, awful. phone rings. Oh, sorry. I’ve got to run.
Blair: Aaron?
Serena: Yeah. He asked me to pose for him in his studio. To be his muse.
Blair: And you said yes?
Serena: Why not? It’s romantic.
Blair: No. It’s a death trap. Being a muse never works out.
Serena: Plenty of women have been both lover and muse to famous artists. Like Picasso.
Blair: Serena! A guy starts out in his Blue Period and everything’s great. But it’s only a matter of time before he’s all into Cubism and it’s some other girl’s eye coming out of her forehead.

Gossip Girl: Did Brooklyn Boy really think he could bury the bone in the backyard and no one would find it? Every Bass will have his day.

Serena: I kind of like being your inspiration.
Aaron: Good. Get used to it.

Danielle: Hey Aaron. Am I early?
Aaron: No actually you’re right on time. Serena, this is Danielle. She models for me.
Serena: Hey. I thought modeling was our thing.
Aaron: I’m doing a series.

Dorota: You have glow, Miss Eleanor. Like Chinese lantern.
Eleanor (Margaret Colin): Well. It’s love, Dorota.
Blair: How can you possibly love Cyrus? He does all the things you hate. He uses the wrong fork. He slurps his soup, he wears sports socks. He’s short and pushy. He’s nothing like Daddy.
Eleanor: Which is precisely why I like him. Harold was lovely in a million ways but he had his secrets. Cyrus is someone I can trust.

Dan: It was just like in All the President’s Men. And I’m thinking there’s no way this could be legit. But all the facts check out. The date, the building, the fire. The insurance even.
Rufus: And you’re happy about this?

Blair: My mom is so happy. I’ve never seen her like this.
Cyrus Rose (Wallace Shawn): Your mother is a diamond in an ocean of coal. From the moment we met I knew she was the one.

Blair: Are the caterers done setting up downstairs?
Eleanor: Yes. And what about you, my sneaky daughter. Are you done yet?
Blair: What do you mean?
Eleanor: Cyrus told me that you had lunch together, he was very touched. Of course he doesn’t know yet that you have an agenda for absolutely everything.
Blair: I don’t know what you’re talking about.
Eleanor: Blair. You’re not a child anymore. But you can’t help it can you? You can’t help meddling and scheming.

Blair: So Pablo’s already moved on. That was faster than I thought.

Jenny: Wait, what are you doing with my dresses?
Agnes (Willa Holland): You know when I let you in I had no idea you’d be such a little thief. Stealing my contact list and our whole business—
Jenny: I wasn’t stealing, Agnes.
Agnes: You know you think you’re so talented and unique, don’t you?
Jenny: No. I don’t.
Agnes: You know three weeks ago you were absolutely nothing. You were a little intern, pinning my hem.

Agnes: You did this. Now by the time I get back I want you and your crap out of my apartment.

Cyrus: Ah. The Mythical Serena.
Serena: Oh. You must be Cyrus, Eleanor’s boyfriend. How did you know who I was?
Cyrus: Well I recognized you from Aaron’s studio.
Serena: You know Aaron?
Cyrus: He’s my son.
Serena: Oh my goodness.
Cyrus: You didn’t catch the family resemblance?

Eleanor: Did you cheat on your ex-wife?
Cyrus: Eleanor—
Eleanor: Well, did you? Is it true?
Cyrus: Yes. it is.
Eleanor: Get out.

Eleanor: I thought he was different. I have to go lie down.

Blair: Cyndi Lauper! What are you doing here?
Cyndi: My pal Cyrus called me yesterday. He bought out my gig and asked me to play this girl’s party instead. I guess he’s madly in love with her mother. I’m looking for a Blair Waldorf. {Blair offers her hand} How do you do.
Blair: Make yourself at home. I— Oh! Dorota! This is Dorota. She’s your biggest fan.
Dorota: Oh my! Miss Lauper. Wait! Miss Blair. Where are you going?
Blair: I wanted a Harry Winston choker for my birthday and instead I got a conscience. I gotta go.

Chuck: If you use this against my father I will destroy you.
Dan: Chuck, what happened is bigger than you hating me or me trying to make it as a writer. I couldn’t ignore this if I wanted to.
Chuck: It will ruin our family. Don’t do it. Please.

Blair: You threw in the towel rather easily. I expected a harder fight.
Cyrus: I’m smart enough to know that getting into a war with Eleanor’s daughter is never going to result in a victory.
Blair: So you retreated with dignity.
Cyrus: Who says I gave up?
Blair: Oh my god. You outmaneuvered me! You deliberately let me win counting on the fact that Cyndi Lauper would prey on my emotions.
Cyrus: I’m a lawyer. I do think a few moves ahead. Some of us can’t rely entirely on our looks, you know.
Blair: Well done.
Cyrus: Not enough.
Blair: Fine! You’re a genius. You better be good to my mother or I’ll be coming for you.
Cyrus: Those are fair terms.
Blair: Now. Come upstairs and stand next to me while I tell my mom the whole truth about the golden lion. She’ll be furious with me so I may need an attorney.

Aaron: I don’t know how it works in high school, but I like to date more than one person at once. You’re free to date other people too.
Serena: Well thank you for the condescending lecture, but that’s not really my thing.

Rufus: You don’t even have your coat off and you’re already using emotional blackmail to get your way.
Jenny: Spin it how you like. I just need your signature.

Gossip Girl: Poor Little Orphan Jenny. Looks like she needs a Daddy Warbucks. But Daddy Warbucks don’t grow on trees. At least not a tree in Brooklyn.

Bart: I want to apologize, son.
Chuck: Apologize.
Bart: I never blamed you for your mother’s death. I read that short story that Dan Humphrey wrote about you and your mother. I had no idea you felt that way. It’s my fault. I know I’ve had trouble being close to you. But it’s not for the reasons you think. It’s just hard because—every time I look at you I see her.
Chuck: You miss her.
Bart: You have no idea. I’ve made terrible mistakes in my life but I don’t want to make another. I want to know my son. So any interest in going to that hockey game?
Chuck: I’ll, ah, clear my calendar.

Rufus: I spoke to your sister. My plan didn’t exactly pan out.

Blair: I can’t believe Aaron is Cyrus’ son. Of course you get the prince and I get stuck with the toad.

Serena: I really tried to deal with the casual dating thing but it’s just not for me.
Blair: Of course it’s not. Because beneath that free spirit façade you’re totally conventional just like I am.
Serena: It’s not a façade. I believe in freedom. People following their hearts, doing what they want. You know I always wish I had lived in the 60s.
Blair: You believe in long hair, peasant skirts and sandals. But you in an open relationship? I don’t think so.

Gossip Girl: Some surprises hit you over the head like a squash racket. And others sneak up on you when you’re least expecting it.

Gossip Girl: And sometimes the biggest surprises are the ones you spring on yourself. Scampering about in a slip is one way to shed old skin. But will embracing free love be as easy as flinging off a pair of Fendi flats? Looks like someone’s going barefoot in the park. XOXO —Gossip Girl