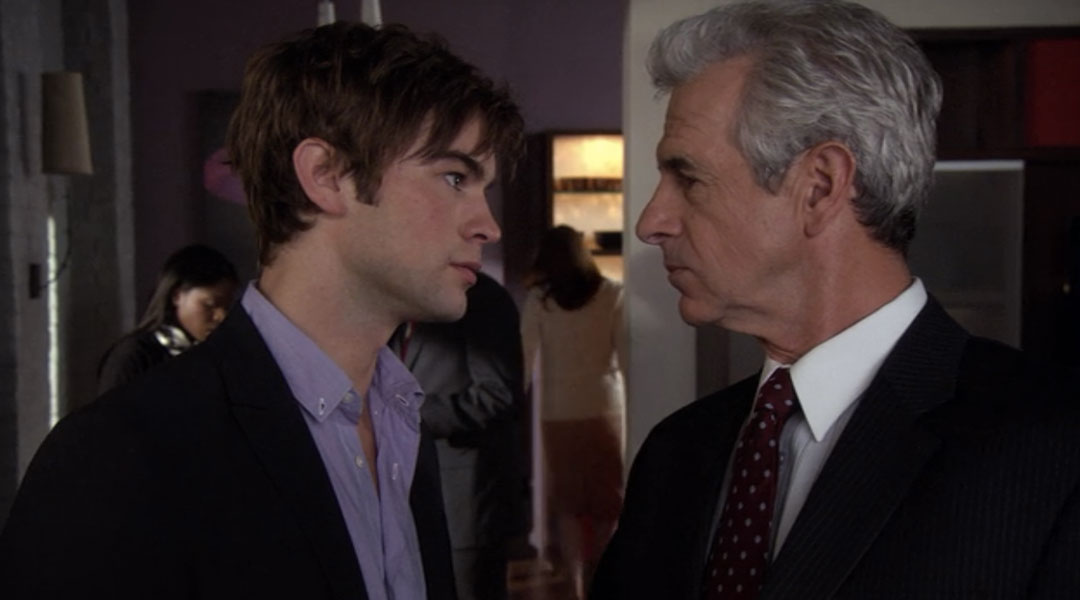 Trip (Aaron Tveit): Even if the night ends in defeat at least we’ll have a great party.
Maureen (Holley Fain): Sweety, don’t talk like that.
Trip: This morning’s polling numbers aren’t great. We’re down where we sohuld be up and where we’re up we’re barely hanging on.
Maureen: That’s what makes it exciting, right?

William van der Bilt (James Naughton): He’s right, Nathaniel. Thing’s aren’t where they should be. The Buckley’s dirty pool is starting to work. Thanks to Serena we weren’t able to expose it.
Nate: Well isn’t there something we could do?
William: It’s election day. At this point, Nathaniel, it would take nothing short of a miracle.

Serena: Hey. I was running errands and K.C. asked me to drop off your Jimmy Fallon interview.
Olivia (Hilary Duff): Great. I guess that means you’ve seen it.
Serena: Yeah.
Olivia: You know I didn’t mean what I said.
Serena: Oh, don’t worry about that. I’m sure Dan understands.
Olivia: He hasn’t seen it. I don’t know what to do. I have to fix this. And meanwhile keep him away from TV and internet and strangers with the urge to make fun of him.
Serena: Don’t forget about Gossip Girl.
Olivia: I have to keep him just completely isolated.

Blair: S. I hope you’re not here looking for an apology.
Serena: No, I was dropping something off to Olivia.
Blair: Oh that’s right. I momentarily forgot your job is more important than your friends.

Gossip Girl: It looks like Trip’s prayers have been answered with another Miracle on the Hudson. Are the van der Bilt’s blessed with good luck? Or good timing?

Nate: What are you doing here?
Serena: I left you a message but you never called me back.
Nate: Yeah well as you can see I’ve been sort of busy and I really have nothing to say to you.
Serena: Then I’ll make it quick. I need you to put me and Patrick Roberts on the guest list for Trip’s party tonight.
Nate: Are you kidding me?
Serena: Nate, my job is at stake.
Nate: Oh. That’s funny. So is my cousin’s campaign thanks to you.
Serena: Look as far as I’m concerned we’re even. You used me for your Buckley photo scandal. All I did was find out and undo it.
Nate: Well I wouldn’t exactly call revenge a solid foundation for a friendship.
Serena: Who said anything about a friendship? All I need is an invite plus one.

Patrick (Simon Miller): I just finished reading a fantastic script.
Serena: The political thriller?
Patrick: No, it’s a remake of Leaving Las Vegas. They want to redo it with a younger cast.
Serena: Where did you get those scripts?
Patrick: In the garbage.

Serena: Put on some clothes please.

Gossip Girl: This election may be too close to call. But when it’s his family’s honor or his own, Nate Archibald has the number on speed dial.

Serena: See! Isn’t this great? You’ve got the perfect Capitol Hill vibe.
Patrick: I gotta hit the can.
Serena: Okay.

Serena: Hey Blair.
Blair: Hey! Do you see that gorgeous blonde in Proenza Schouler talking to those high profile politicians? That’s my best friend Brandeis. She knows most of them personally.
Serena: Aw. That’s great. I mean political connections aren’t the first thing most people look for in friends.
Blair: They must really love her because when she introduced us they seemed thrilled to meet me. They even asked if we were sisters.
Serena: Well I can’t wait for you to meet Patrick. He’s over at the bar getting me a drink right now. I feel so lucky. He’s so attentive.
Blair: It doesn’t take much, does it? What? No one’s ever accused you of saying no.

Dan: Hey, where’s the Scrabble dictionary? to himself I swear squick is a word.

Rufus: Did my son just walk out before playing a Q on a double letter? That is so not the Humphrey way.

Patrick: You think Blair had me thrown out because I was a bit tipsy? Or because I was talking to that high-priced callgirl friend of hers.
Serena: What did you just say?

Vanessa (Jessica Szohr): Why’d you do it?
Nate: Do what?
Vanessa: C’mon Nate. You were the only one who knew I had that meeting to sell that footage.
Nate: I had to protect Trip.
Vanessa: I came to you first as a friend.
Nate: Don’t be so self-righteous. You were only selling the footage to further your own career.

Gossip Girl: The polls are closed and Gossip Girl is callng this election. Dirty.

Chuck: Don’t tell me after eighteen years you can’t read Waldorf’s subtext.
Serena: I sholdn’t have to. If that’s what she is feeling then she should tell me. It is time for her to grow up.
Chuck: This coming from someone who just pushed their best friend into a cake.

Blair: You’re drifting away from Dan and your family and you’ve lost Nate. One of your oldest friends. This night is finally over. And as far as I’m concerned, so are we.

Gossip Girl: Who would have thought that S and B’s friendship had a term limit. Sorry ladies, party’s over.

Maureen: I think Nathaniel was brilliant tonight, don’t you?
William: Brilliant. Foolish is more like it.
Maureen: C’mon, William. Even you have to admit it. This couldn’t have worked any better if it was planned.
William: You.
Maureen: All this time you thought the only thing I was capable of was holding his hand and smiling on the sidelines.
William: To be honest my dear, I never really spent that much time thinking about you.
Maureen: Well, your loss is my gain. My husband is a congressman. And thanks to Vanessa’s camera you’re out of our lives for good. Finally Trip can be his own man. My man.
William: You think I’m really just going to stand aside and let myself become collateral damage? I’ll tell him.
Maureen: You don’t exactly have a lot of credibility right now. Who’s he going to believe?

Gossip Girl: Sometimes it’s hard to see the lines we’ve drawn. Until we cross them. That’s when we rely on the ones we love to pull us back. And give us something to hold on to.

Trip: You want to tell me about it?
Serena: I don’t think you want to hear this one.
Trip: I do. I’ll let your problem be the first one I address as your elected representative.

Gossip Girl: Then there are the clearly marked lines. The ones that if you dare cross you may never find your way back. XOXO — Gossip Girl