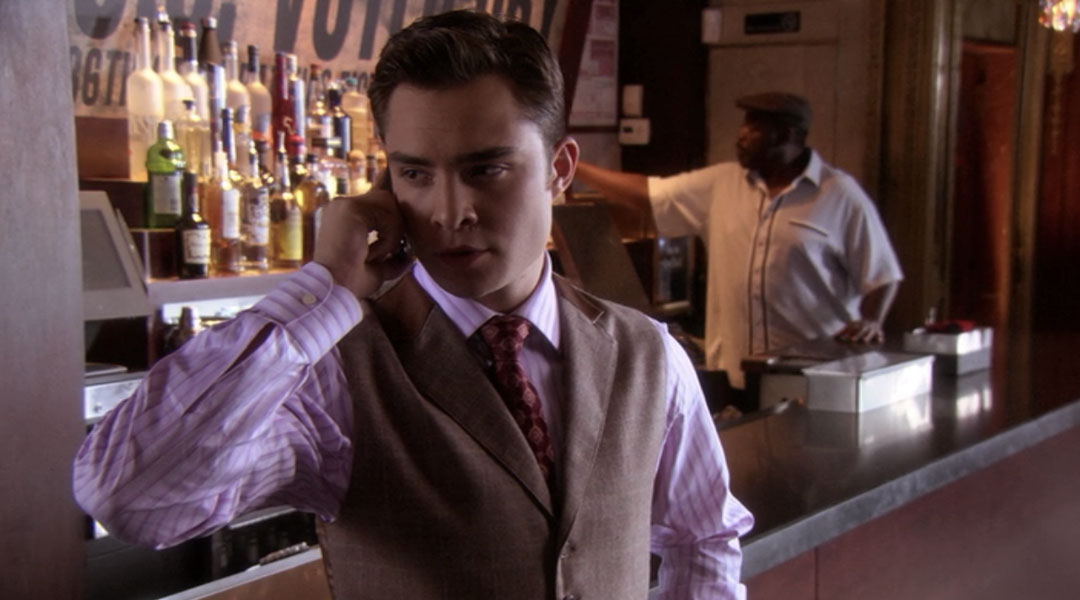 Gossip Girl: All Hallow’s Eve. The one day of the year it’s socially acceptable to play dress-up. The only question is, who do you want to be? There are costumes to make men feel like boys again. Or turn little girls into queens.

Blair: I was thinking an 80s theme. Although shoulder pads can be overwhelming on my delicate frame.
Chuck: This is a business, not a high school party.
Blair: I told you I was sorry for my little transgression and you forgave me. Now either make me kiss a girl already or let’s move on.
Chuck: I apologize. I’ve been on edge lately.

Dan: So you really think the sight of Olivia in fake fangs reciting stilted dialogue is going to be a deal breaker, don’t you?
Nate: Oh the dialogue is awesome. It’s the part without the talking that’s the problem.
Dan: I think I can handle some PG-13 bloodsucking. C’mon.
Nate: Seriously, I mean do you not get internet here in Brooklyn? Okay, Patrick Roberts who plays her vampire co-star was her boyfriend the whole time they were shooting this. All the blogs said they got really into it and started doing it for real. Like, sex scene on the cutting room floor real.
Dan: I think the most disturbing part in all of this is you’ve been reading Endless Nights blogs.
Nate: Okay, that’s— I know you think you’re okay with it. But you don’t want to watch your girlfriend with another guy. I mean comparing looks… and noises…
Dan: No, see that’s the problem with your theory. I have no idea if she makes noises yet. We haven’t gotten to the noises stage.

Gossip Girl: Spotted: One star with her hand in the cookie jar. Even P**** H***** knows our Lonely Boy is going to be getting a Halloween treat.

Serena, without Endless Nights, Patrick is on the road to Mark Hamill-hood.
Serena: Is that the guy from Star Wars that’s not Harrison Ford?

Eric: So Rufus asked my size this morning. Does this mean I’m getting a flannel?
Jenny: No. He’s just a costume enthusiast. He likes Halloween more than he likes Christmas and his birthday. So we have to find a party otherwise I swear he’s going to make us hand out candy dressed as the Octo Babies.

Jonathan (Matt Doyle): Hello Invasion of the Body Snatchers. Looks like Jenny, sounds like Jenny, is really a dark, power hungry monster.
Eric: Oh c’mon. She’s still the same Jenny underneath. She just has to wear the mask for school.
Jonathan: That mask is becoming her face.

Dan: Is her acting this good in the rest of the movie? I mean just look at the way she’s looking at him. That’s love. That’s definitely love. And lust. And… gratitude—
Nate: Dude, it’s an orgasm.
Dan: Yeah.

Chuck: I no longer have time for the establishment to accept me. I need them to come begging. I want to open my club tomorrow. Halloween.
Blair listening in: See. My idea.
Serena: Okay, tomorrow. Absolutely.
Chuck: And Serena, I don’t want Blair anywhere near this.
Serena: Okay, bye. I’m sorry. Clearly Chuck hasn’t forgiven you.

Gossip Girl: Looks like someone’s Ghosts of Tricks Past have come back to haunt this Halloween.

Nate: I’m surprised Blair isn’t here. What, are you guys in another fight?
Chuck: A fight implies time and energy. This is more of an ongoing detached distrust.

Serena: Blair, I know this is hard to hear but *maybe* today’s not about you. Chuck has 24 hours to create something from scratch. His liquor license hasn’t even cleared yet.

Rufus: We’re not going to that club opening.
Lily: But I already got costumes.
Rufus: Aren’t you the one telling me I shouldn’t embarrass the kids?
Lily: Well that’s when you wanted us all to dress up like The Ramones.
Rufus: Well Jenny would make a great Joey.

Jenny: Not bad. But it’s Prohibition. Not Last of the Mohicans.

Olivia (Hilary Duff): Wow. Looks like you’re feeling a lot better.
Dan: Yeah, it was just one of those 24 hour things. Just kind of weird.
Olivia: Dan, if this is about that cookie jar photo. If you’re not ready I totally understand.
Dan: Ready. No, I’m—I love that picture of you. It’s so flattering. And who can resist free gifts in shiny wrappers?

Gossip Girl: Looks like little Chuck finally stepped out from Big Bad Bart’s shadow. Too bad his girlfriend’s still playing on the dark side.

Rufus: What do you think? Does it really play without the other Ramones? I was going to do Iggy but I thought it might scare the children.
Lily: Not that I don’t enjoy you shirtless and in eyeliner but I do think you made the right choice.

Olivia: Patrick is coming out for the Gimlet opening tonight. He’s already on a plane.
Dan: I don’t like where this is headed. I have a gun.

Jenny: I don’t know why he’s blaming me. I didn’t do anything. I can’t control every girl at school.
Lily: Oh Jenny. You and I both know that that’s not true.

Blair: You’re still mad from before. It’s clouding your judgment.
Chuck: This is not about last week. It’s about you, Blair. It’s the reason why I couldn’t say “I love you.” It’s not a game. It’s because I knew I couldn’t trust you.
Blair: I did this because I love you.
Chuck: Be that as it may, I have a club to open. And you’re no longer invited.
Blair: Fine. S, c’mon. We’re leaving.
Serena: Blair, I’m sorry. I’m gonna stay with Chuck.

Gossip Girl: You really proved yourself with this one, S. Looks like your work troubles have turned into a labor of love.

Jenny: You know I have to act this way about school stuff. But I’m still your friend, I’m still your sister. We just can’t let the worlds get confused.
Eric: I’m not confused. I want nothing to do with you in either world.

K.C. (Deanna Russo): Your job now includes publicly dating Patrick.
Serena: I don’t know if I’d call that work.
K.C.: Get back to me after date two.

Blair: I’m giving you a chance to leave that Lizzie Grubman wannabe before you get run over.

Gossip Girl: Like all god things the witching hour must come to an end. True natures are revealed. Tricks are turned into treats. And taking off costumes is as much fun as putting them on. Except for little girls who forget that Halloween is only one night. They wear their costumes for so long pretty soon they can’t even remember who they were before they put them on. XOXO —Gossip Girl