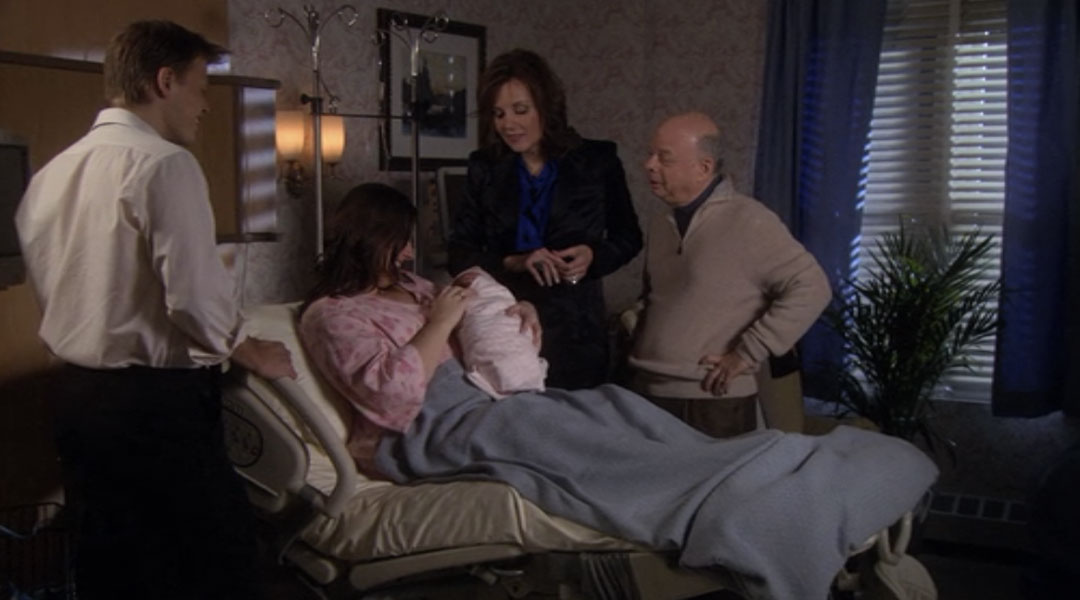 Gossip Girl: You reap what you sow. What goes around comes around. No matter how far you run, you can never truly escape. Everything catches up to you in the end. And when it does, it usually kicks your ass.

Lily: Rufus, teenage girls are a nightmare. As son as they realize you love them no matter what you do, you lose all your power. You just have to wait until they finish college. Or, in the case of Serena, rebel and not go. Just talk to her. Is she in her room?
Rufus: No. I sent her to loft to stay with Dan so I could consider the best course of action.
Lily: Well grounding her again probably won’t work.
Rufus: Short of sending her away I don’t know anything else that will.
Lily: Well I think that would be a mistake. And I would hate to separate her and Eric. They need each other.
Eric: Don’t worry about me. After what I witnessed yesterday, you can do whatever you want with Jenny.

Jenny: Finally.
Nate: Jenny, hey you’re still here.
Jenny: Gee, thanks. As if it wasn’t humiliating enough when you fall asleep in the middle of my sentence.
Nate: Don’t you mean monologue?

Cyrus (Wallace Shawn): Now, as soon as that moment comes your mother and I are heading straight back to Paris. So are you coming with us? What are your plans?
Blair: Nothing. Beyond having a second date with Cameron this afternoon. And staying as far as possible from the Empire State Building.
Cyrus: What’s the Empire State Building have to do with it?
Blair: An Affair to Remember was on TCM last night; it gave me nightmares.
Dorota: Blair loves the Empire State Building even though she doesn’t want to and she should just admit it and make all our life easier.

Blair: I need to make sure that whatever happens, I don’t go anywhere near that stupid Art Deco landmark.
Dorota: Miss Blair, I defriend Mr. Chuck in Facebook and in life. But this is pretty romantic thing he’s doing. If not going means never having Chuck in your life again are you prepared to live like that?
Blair: Yes. But even if I’m not, if you let me go anywhere near 34th Street there won’t be a miracle but a massacre.

Gossip Girl: Spotted: A family reunion only Faulkner would approve of. I used to think that S and Lonely Boy were the most boring couple on the Upper East Side. But what makes them actually great together, is when they’re supposed to be with other people.

Gossip Girl: Good luck talking your way out of this one, S.

Blair: I hope you’re on your way to see Nate.
Serena: You saw the blast?
Blair: Yes. And although I’m inclined to say that Gossip Girl doesn’t know what she’s talking about since she also posted some blurry photo of a Russian Mail Order Bride and said it was Georgina, it really did look like you and Humphrey. I mean, isn’t that a little ’08? Like maxi-dresses and Miley Cyrus.
Serena: Blair—
Blair: We all try on old clothes from time to time, and sure we may even be surprised when they still fit, but that doesn’t mean we should wear them again. Ever!
Serena: Nothing happened. And as for the photos: obviously the work of Jenny Humphrey. I knew she hated me, but apparently she hates Dan too? I just wish she would hole up in Brooklyn and leave the rest of us alone.
Blair: Brooklyn. Is that where she is right now?
Serena: I guess so. Look, I gotta go call Dan and make sure he knows what’s going on.

Serena: Hey, have you seen Nate?
Chuck: I have no idea where he is. Although I do have a good idea where you’ve been.
Serena: Chuck—
Chuck: Look, before you go and use whatever line you’ve prepared, think hard. Nate knows who he loves and what he wants. So unless you can say the same, look him in the eye and tell him that. Or stop playing games. Nate walks in. Courage, ma soeur.

Jenny: Blair. What are you doing here?
Blair: Someone has to give you the smackdown you so richly deserve. That it’s me who gets to do it is just the cherry on top.

Blair: This isn’t copycat dressing at Constance. Or dropping dairy on your best friend to prove a point. Nate and Serena, that’s mythic. You don’t mess with that and survive. You’re hurting people I love. You’re hurting people you love.
Jenny: I wasn’t trying to, I—
Blair: Nate loves Serena, Dan loves Vanessa—god knows why—and Chuck loves me. But you Jenny? No one loves you. Except your daddy. And, after what you pulled yesterday, who knows if that’s even true anymore.

Blair: I’m in luck! smacks Dan Two smackdowns for the price of none.
Dan: What the hell are you doing?
Blair: Don’t screw up Nate and Serena.
Dan: Nothing happened.
Blair: So said Serena. But I’m thinking she left a little something out.

Blair: Signs are for the religious, the superstitious and the lowerclass. I don’t believe in them and neither should you. sees the Empire State Building. Damn you, Chuck Bass. Damn you to hell.
Dan: Why—? When did we start talking about Chuck Bass?

Gossip Girl: Spotted atop the Empire. State Building, that is. A boy billionaire, flowers in hand. Oh Chuck, if you could only see to Brooklyn. You might turn that frown upside down.
Dorota: My water broke!
Then again, maybe you should guard your heart. Dorota’s water might not be the only thing breaking tonight.

Georgina (Michelle Trachtenberg): I need to talk to you. I’m in trouble. Big trouble.
Blair: And while it warms my heart hearing that, I’m late. Goodbye Georgina. May god save your soul. Again.

Chuck: The world you’re looking for only exists from the outside. The only reason I survive in it is because I always knew it was empty.

Serena: I feel terrible about Nate.
Dan: Oh god. I know. I know— Which part, exactly? Was it the kissing me part or the him finding out part? Or wait, was it the part were he asked us if we had feelings for one another.

Chuck: Blair, I thought you didn’t love me anymore. I didn’t care if I lived or died. Jenny Humphrey was—
Blair: Don’t! Don’t say her name! Or anything else to me ever again. This whole night didn’t happen.

Jenny: There’s nothing here for me anymore.
Eric: I’m here. Don’t go.
Jenny: Eric…
Eric: You may be a total bitch sometimes but you’re still my best friend. What am I going to do next year at school without you? Who’s going to dump yogurt on my head?

Serena: I’m actually excited to have an entire summer with nothing to do but figure things out.
Blair: Um, first of all, S, you didn’t go to school this year and you haven’t had a real job in months. So life is kind of like summer for you.
Serena: Uh, okay. Thanks. Kick a girl when she’s down. I really am going to change.
Blair: Why? All the drama, that’s who you are. Just like I’m someone who’s not going to stop looking for love just because I lost it. Which is why I’m going directly into the belly of the beast: Paris. And why you’re coming with me.

Georgina: Hi Dan.
Dan: Georgina, what are you doing back in town?
Georgina: Looking for you actually. I have something of yours.
Dan: What? I don’t remember giving you anything.
Georgina: Well. You gave me this.
Dan: What?
Georgina: Congratulations, Daddy! He looks just like you.

Gossip Girl: And all in an instant, everything changes. We leave the past behind and speed toward the unknown. Our future. We set out for far away places and try to find our self. Or try to lose ourselves. Exploring pleasures closer to home. The problems start when we refuse to let change happen, and cling to old habits. But if we hold on to the past too tight, the future may never come. ‘Til death do us part. XOXO —Gossip Girl.