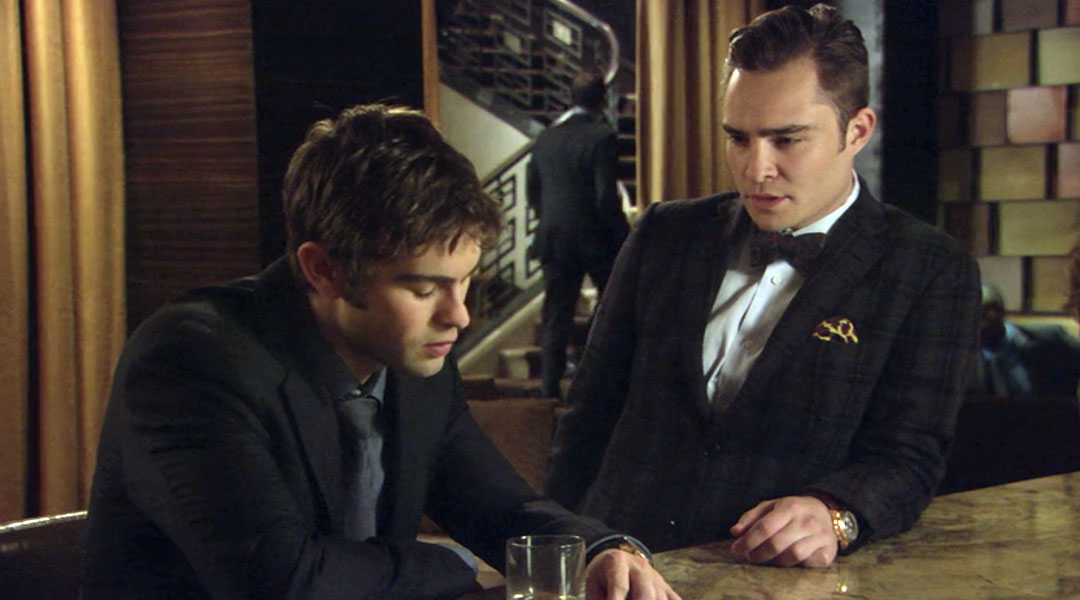 Gossip Girl: Desperate times call for desperate measures. And even the most disciplined people can resort to destruction.
Chuck: Funny. I didn’t ask for a turndown service. But did you find what you’re looking for?
Gossip Girl: While others try to rebuild bridges using more intimate tactics.

Serena: If we want to be a couple in the real world we need to go out and make amends.
Dan: Okay. Where do we start?
Serena: I’ll start with Blair and you start with Nate. And then afterward brunch and a movie on me.

Bart (Robert John Burke): Cut the crap, Chuck. There’s the Richard Phillips. It used to have a backing. I know you have it.
Chuck: You mean the papers? That hold the proof of your illegal oil activities.
Bart: Papers? You don’t have it. You don’t even know what you’re looking for.
Ivy: Oh sorry to interrupt this riveting Oedipal showdown, but I think I have what you’re looking for.

Serena: Blair, I know that I’ve done some horrible things, but I am so sorry and I’ve come to make amends.
Blair: Amends would imply that there’s something to be mended. What you did can never be fixed.
Serena: You’ve sworn that our friendship is beyond repair in the past but we’ve always gotten through it.
Blair: Well this time is different. You seduced Dan on the bar at the Campbell apartment. At the very same spot you deflowered my first boyfriend. I would never be that cruel to you. On purpose.
Serena: I won’t accept losing you. So. I am just going to sit here until you realize how sorry I am and how much I love you.

Ivy (Kaylee DeFer): Last year Lily did everything in her power to hurt me and leave me with nothing. No friends, no family, no home. I want Lily to know how that feels. That’s my price.
Bart: Surely there must be something else.
Ivy: All I want is for Lily to be left with no one and nothing. Now whichever one of you makes that happen first can have the microfilm.

Gossip Girl: Sometimes the partner is more shocking than the crime itself.

Blair: Okay. What if Nelly is right? What if my line gets lost because I’m not in high school… my dad’s not a Beatle?

Ivy: You know I played Hedda Gabler in high school, but acting like I’m into Rufus when I’m really in love with you is the hardest role of my life.
William van der Woodsen (William Baldwin): You deserve an Oscar, darling. But take solace in knowing that you serve a higher cause.
Ivy: Giving Lily her comeuppance? Though I still wish we had taken the money and run like I wanted to.
William: So do I, but this is what Lola wanted. And Lily deserves to pay for the way she treated you.

Nate: What do you want?
Dan: I came to apologize. I’ve been doing some soul-searching.
Chuck: That implies you have a soul.
Dan: That’s funny coming from you.
Nate: That’s hilarious. I mean who would have thought Chuck Bass turns out to be the good guy and Humphrey the villain.
Dan: Well I really want to turn that around. I’m sorry about what I wrote. About all of you. I really want to make amends.
Chuck: Well if you really mean that, you just gave me an idea.

Blair: Well. If it isn’t Gypsy Rose Lee. Without the talent. I have no need for strippers or sex tapes at my pop-up shop, so please run along.
Sage (Sofia Black-D’Elia): You should be thanking me. That tape got you exactly what you wanted.
Blair: And did it get you what you wanted?
Sage: Yeah, it did. My dad and Serena split up, which is how I want them to stay.

Blair: I want a meeting. With the heads of the five families.

Nate: I don’t know why you’re here, but get out. Before security throws you out.
Bart: That’s not a nice way to greet your partner.
Nate: What are you talking about?
Bart: You are indebted to me, and I am here to collect. So unless you want to lose everything, you’re going to help me defeat Chuck. Buck up, it’s gonna be fun.

Gossip Girl: Betrayal is a bitter pill to swallow. But nothing’s worse than having blackmail shoved down your throat.

Sage: Everyone loves a crown, but when it comes to power the mob totally trumps the monarchy.

Chuck: I usually frown on negotiating with terrorists, but stamping out my father’s freedom has become my life’s mission.
Ivy: What’s your plan to destroy Lily?
Chuck: Simply play the powerful card we’ve been dealt. The microfilm’s enough to put her away too. As long as she appears to be Bart’s accomplice.

Dan: I’m here to make amends with you and Ivy.
Rufus: I’m happy you want to make amends, son, but I owe you an apology as well. Looks like you were right about Ivy. I was a fool for trusting her.

Serena: Blair, I just wanna help.
Blair: If I choose to believe you and you really want to help, then come up with a new scheme before those teenage goombas ruin everything.

Serena: Look, I’ll do whatever you want, but you don’t need a scheme. Your line is spectacular and it speaks for itself. And there’s nothing that Sage or anyone can do to change that.

Nate: Chuck… it was, uh, it was all my fault.
Chuck: What was?
Nate: There was nothing I could do. He cornered me.
Chuck: He who? My father?

Lily: What in the world are you doing here?
Rufus: I know I said I wouldn’t help you but I changed my mind. {he hands her the microfilm}

Gossip Girl: They say nothing inspires forgiveness quite like revenge.

Bart: If you don’t find it and hand it over, all the torture you wished on Lily, it’ll seem like child’s play.
Chuck: My father’s threats aren’t idle, neither are mine.

Lily: What made you change your mind?
Rufus: Ivy’s not who I thought she was. I know. I should have been tipped off by the whole “pretending to be your niece” thing.
Lily: Well. You always believe the best in people. It’s your virtue and your downfall.
Rufus: I still see the best in you, Lil. After everything we’ve been through it’s probably safe to say that we won’t be together again. But we were family for a long time. And that means something. I’d really like peace between us.

Bart: Where are you going? Does Blair need you to come over to kill a spider?
Chuck: I’m not wasting any more time.
Bart: So you’re giving up. What a shocker.
Chuck: You’re right. You know me so well.

Serena: You’re about to get everything you’ve ever wanted. And tonight’s success is just the beginning.
Blair: Well this line was inspired by both of us. Ruling Constance together. This is your success too. I just hope that this night leads to… the other thing I’ve always wanted. To be with Chuck.
Serena: He loves you more than anything in the whole world.
Blair: You’ll find your great love too.

Chuck: If you destroy that evidence there is nothing to stop him from hurting anyone, including you.
Lily: That’s ridiculous, Charles. He would never hurt me. Since his return he has done nothing but prove his love.
Chuck: You once told me my father was incapable of love. That is the truth. I just saw him in a hotel room, half-naked, with Ivy.
Lily: That lie is beneath even you, Charles. I’m not going to let you or anyone else threaten our family ever again. {she throws the microfilm in the fire}
Chuck: Don’t! {too late}

Gossip Girl: Ashes to ashes, dust to dust. Even the best laid plans can go bust.

Chuck: I’m happy for you, Blair. Forget me.
Blair: Chuck? What happened?
Chuck: What I should have always expected. The only parent who ever loved me—the mother who chose me as a son—abandoned me. I finally had the evidence to vanquish my father. She destroyed it to protect him.
Blair: We’ll find new evidence. We’ll find another way.
Chuck: There is no other way. This was it. It’s over.
Blair: Well even if we can’t put Bart behind bars we can still be together.
Chuck: Stop lying to yourself. We made a pact. You fulfilled your side, I failed at mine. We can’t be together.
Blair: Chuck… please.
Chuck: Go. Just go.

Dan: So now that we’ve knocked down our last obstacles, are we finally ready to do this?
Serena: Well do you remember that we said if we ever jumped into a relationship again that that would be it? That we would only get one more chance. Are you sure that I’m the one person you want to be with?
Dan: Are you talking about Blair? Serena, yes I’m sure you are the one. Whether or not I’ve admitted it to myself, you have always been the one. How about you?
Serena: Yeah, I’m sure.

Gossip Girl: Sometimes the light is so dazzling it’s all you can see. Other times dark clouds devour you and it seems the clouds will never clear. But when the sun beams while the rain falls, it can bring a bittersweet rainbow.

Dan: I only have a minute.
Georgina (Michelle Trachtenberg): Humphrey, going rogue is not part of our agreement. Where the hell have you been?
Dan: I’m writing the Serena chapter.
Georgina: What?

Gossip Girl: So watch out. Just when you think you’re walking off into the sunset, a lightning bolt may strike you down. XOXO —Gossip Girl.