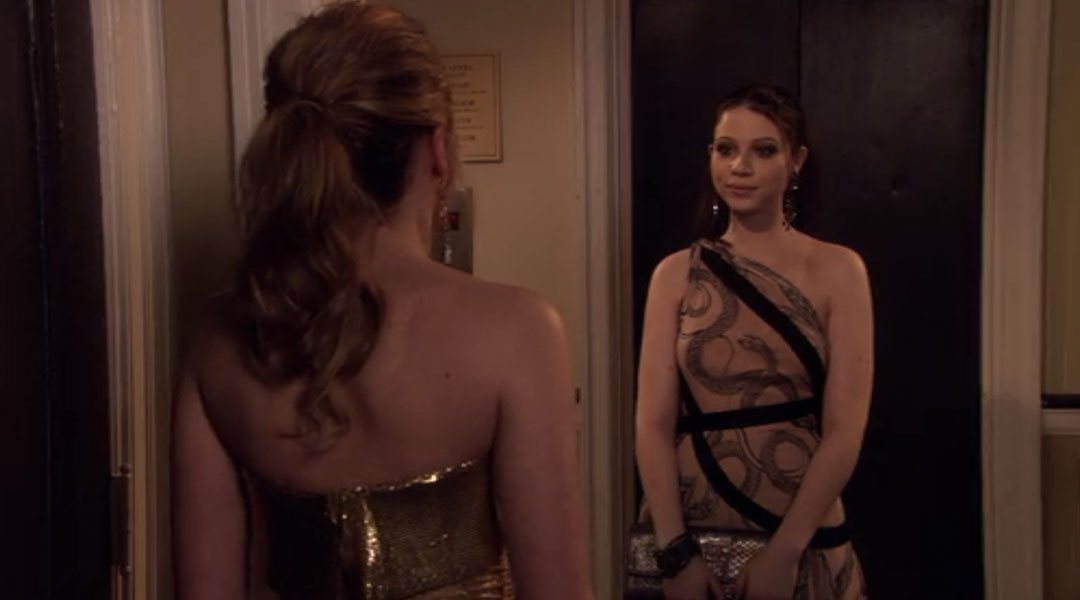 Serena: Well at least now we know why Charlie’s been acting so unbalanced.
Vanessa (Jessica Szohr): Yeah. Because she is.

Serena: You know this isn’t her fault. She needs help. The last time that this happened she ended up wandering through the snow in her bare feet.
Vanessa: Yeah. After she Single White Female’d her college roommate.
Serena: Rufus said the girl’s boyfriend led her on.
Vanessa: Fine. She’s in your dress with your ex. But if you’re so concerned about Charlie you find her and I’ll find Dan.

Serena: You know maybe I should be the one to tell Dan what’s going on. At least he considers me a friend, which is more than you can say right now.
Vanessa: And who’s fault is that?
Serena: Yours.

Nate: What’s going on?
Dan: Charlie said something that kind of weirded me out. I’m hoping it’s just a crazy misunderstanding and not actual crazy.
Nate: What’d she say?
Dan: Well, ah, we were kissing. And then things started to, you know. So then she says, “Call me Serena.”
Nate: What?
Dan: Yeah.
Nate: Woah. Are you sure? I mean maybe that’s just what you wanted to hear.
Dan: Nice one. But yeah. Yeah I’m sure.

Chuck: Do you think she’d miss the opportunity to enter her old stomping ground on the arm of a prince?
Eleanor (Margaret Colin): She is finally getting her fairytale. She doesn’t need the Big Bad Wolf to ruin it. Why don’t you say goodbye once and for all. And let her go.

Eric: Okay, woah. Just tell me that no one’s trying to stop a wedding, run a Ponzi scheme, give anybody fake cancer or turn into a justifiably vengeful townie.

Iz (Nicole Fiscella): Look who got cute.
Eric: Still gay.
Kati: That means you can dance.

Reina (Tika Sumpter): My father was so angry, blaming you for all that’s happened. And after everything I put you through I just wanted to apologize.
Chuck: You don’t need to apologize to me. We both did things we didn’t think were wrong in the moment.

Blair: I don’t understand why you’re doing this. You tricked me into coming to Chuck’s new hotel by saying that he was in jeopardy and now you won’t let me leave. What am I supposed to do, jump from a third story window?
Chuck listening in: Come on. I know where Blair is. Smart girl.

Georgina (Michelle Trachtenberg): Oh, I can tell you’re up to something. Please let me in on it. I haven’t been this bored since I believed in Jesus.

Dan: I had Charlie but she slipped away.
Vanessa: She’s gotta be around here somewhere.
Georgina: I’m sorry. She’s a part of the gang but I’m not?

Blair: I know you think the Basses are evil. Trust me, I get it. I loved Chuck for so long and he’s punished me for it. He ended up treating me like something he owned instead of something he earned. And it destroyed me. I thought I’d never get over it. But I finally found a way out of the darkness, and you can too.

Russell (Michael Boatman): Reina. You shouldn’t be here.
Reina: Neither should you. But if you go through with this you’re taking me with you, ’cause I’m not leaving without you. I know you didn’t mean to hurt my mother. The fire was an accident. I forgive you. {she grabs the lighter} You’re going to jail for a very long time. And I won’t be coming to visit you. Ever.

Gossip Girl: This just in: Blair Waldorf MIA at Constance. Doesn’t she know her prince is waiting? Or has she found a new one?

Blair: Thank you. Not only for the ride but for, you know, saving me.
Chuck: What was I supposed to do? You called.
Blair: Only because I couldn’t see my phone to dial 911. I still have you on speed dial. I just had to push down the one.
Chuck: The one, huh?

Chuck: I’m so sorry.
Blair: I know.
Chuck: How about a drink to calm your nerves? Then we can return you to your prince, as steady as ever.
Blair: Okay. One drink. That’s all.

Blair: Maybe we should just go back to the party.
Chuck: Why? Pretty much everyone we or Gossip Girl knows is there. Which means it’s almost like we’ve been given the rest of the night off to do what we want.
Blair: Like that movie Death Takes a Holiday? Not the Brad Pitt remake. That was horrible. {Chuck makes a face} What? It was.

Charlie (Kaylee DeFer): You scared me.
Georgina: I get that a lot.

Georgina calling after Serena: I miss you! You get me!

Sophie (Joanne Whalley): I’m sorry, my dear, but you need to give this up. Blair isn’t coming. You asked a question and this is her answer. You know the last thing I wanted was to see you be hurt. Look what has happened.
Louis: I know she’ll be here.

Vanessa: This could be the best satire on the Upper East Side since Bonfire of the Vanities. How long have you been working on this?
Dan: Five years, off and on.

Vanessa: I always thought Serena was the reason you fell into the Upper East Side. But it was more than that.
Dan: Vanessa, seriously, this is none of your business.
Vanessa: You always wanted in. Maybe more than Jenny.
Dan: Of course the irony is, is that if I ever show it to anyone it’ll guarantee my outsider status forever.

Chuck: You really love him, don’t you?
Blair: Yes. But not like I love you. Louis and I, it’s different. It’s lighter, more simple. He makes me happy.
Chuck: And I don’t?
Blair: What we have is a great love. It’s complicated. Intense. All-consuming. No matter what we do and how much we fight, it’ll always pull us in. What’s mere happiness in the face of all that, right?

Serena: All night I’ve realized… I didn’t choose college. I never chose between Dan and Nate. I didn’t even choose Pparis last year. Blair told me I was going. Trust me, I know what it feels like when you’re not making your own decisions.

Chuck: The party’s almost over.
Louis: I know. But Blair hasn’t arrived yet.
Chuck: How could you be sure she’s coming?
Louis: Because I love her. And just as important, I believe in her. I know she’s scared, but she’ll figure it out. And I’ll be here when does.

Dan: Hey, what are you doing up here?
Nate: Meeting Serena. You too?
Dan: Why do I feel like we’ve been here before.

Georgina: Did you find that open window?
Charlie: Yeah. But I shouldn’t have been looking for it anyways. I, um, was just off my meds.
Georgina: No, I don’t think so. I don’t think you were ever on meds.

Blair: Why did you just do that?
Chuck: Because of what you said earlier.
Blair: About being happy? Chuck, that’s not the most important thing. People don’t write sonnets about being compatible. Or novels about shared life goals and stimulating conversation. The great loves are the crazy ones. L’amour fou.
Chuck: Blair we’re not living in Paris in the 20s.

Chuck: There’s a difference between a great love and the right love. I left the Empire State Building last year after two minutes when you didn’t show. Louis waited all night. This is your chance at happiness. You think you shouldn’t want it ’cause you’ve never had it and it scares you. But you deserve your fairytale.
Blair: We make our own fairytales.
Chuck: Only when we have to.

Blair: I didn’t want to let you go just yet.
Chuck: Don’t let anyone tell you you’re not powerful. You’re the most powerful woman I know.

Rufus: He’s getting twenty years.
Chuck: Sounds fair. That’s how long he kept the secret.
Lily: Well I wouldn’t want to be in his shoes, I’ll tell you that.
Chuck: What about your shoes? When’s that happening?
Nate: Yeah. What are your plans for the summer, Mrs. Humphrey?
Lily: Well I’m going to be getting very pale. This thing doesn’t come off until the fall. Just in time to send my baby off to college.
Eric: Sarah Lawrence is like fifteen minutes. I don’t really think I need to be sent off. A light breeze could take me there.

Rufus: At least you don’t have to worry about sun damage and we don’t have to spend the month of August with Eleanor and Cyrus on that cruise like they suggested. Can you imagine?
Blair: I don’t think the Principality of Monaco’s yacht counts as a cruise, Mr. Humphrey.

Dan: So you’re really getting married, huh?
Blair: Yes, and you’re actually going to be invited. I bet you never thought you’d get to go to a royal wedding.
Dan: Only my own. Do you think you could introduce me to Charlotte Casiraghi?

Dan: Listen, if the castle gets lonely, um, you want to watch a movie with a friend.
Blair: I already copied your queue. Our email discourse begins Monday with Hal Ashby’s The Landlord. And we’ll take it from there.

Nate: You must really be hurting.
Chuck: How can you tell?
Nate: You’re not drinking.

Chuck: You’re a good friend.
Nate: One of us has to be.

Serena: Being alone is just what I need. No boys, no bars, just a bottle of sun block and a dozen of the best beach reads. I needed to make a choice and I choose me.

Serena: Have you picked a date yet?
Blair: We’re thinking November.
Serena: Well that doesn’t give me nearly enough time to find a dress to outshine yours. And you know I’ll be wearing white, of course.
Blair: What are you talking about? I already told Louis’ seamstresses to make you a maid-of-honor dress in the brightest fuchsia they could find.

Carol (Sheila Kelley): How was the trip?
Ivy: It was long, but nice. They’re all in there. You can count.
Carol: Thank you, Ivy. You played your part perfectly.
Ivy: Thanks for hiring me.