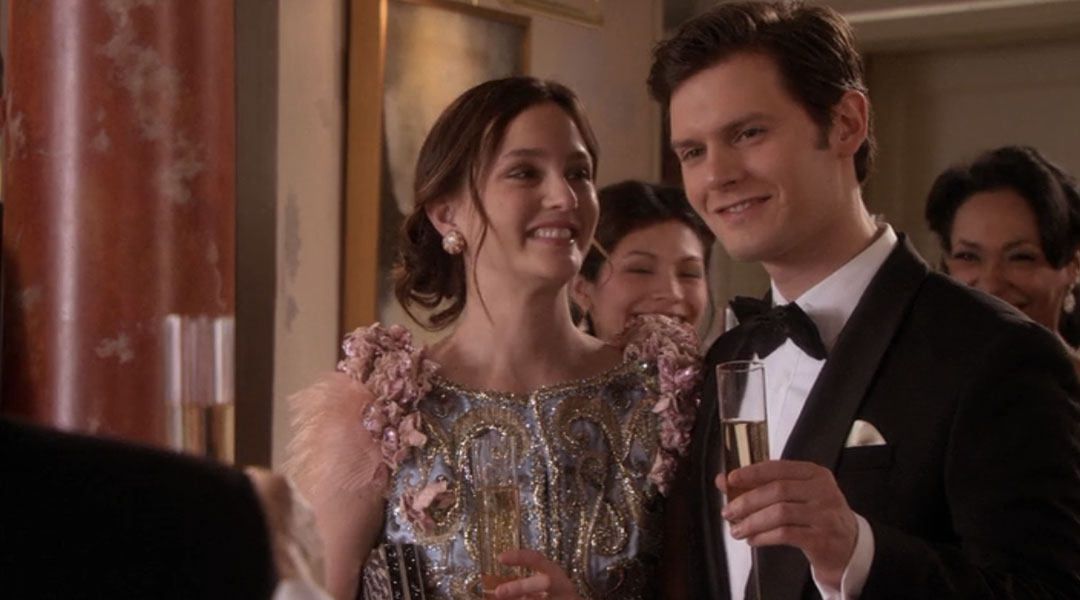 Gossip Girl: Good morning, Sleepyheads. Looks like “dream until your dreams come true” wasn’t such a good idea after all.

Chuck: So I thought I’d bring some luxury across the river. Brooklyn needs it. It’s all bars, bakeries and babies. No hotel in sight. Charles Place. You up to attend the ribbon cutting?
Nate: No thanks.
Chuck: Still pissed I lied to Reina about my father?
Nate: It was a big lie. Even for you.
Chuck: That’s why I’m stepping out from under his dark shadow and away from the Bass name.
Nate: Whatever you want to call yourself or your hotel, you’re still the same person.

Vanessa (Jessica Szohr): You didn’t need to have your cousin make me look like a crazy, jealous bitch to Dan.
Serena: Oh you don’t need any help with that.
Vanessa: She said I manipulated her to ruin Rufus’ business dinner. You’re telling me that innocent cousin Charlie came up with that by herself?
Serena: I’m saying you probably did whatever she said you did. If Charlie’s fighting back, good for her. She’s learning.

Charlie: When I was little Sour Patch Kids were pretty much my best friends. Them and books.
Dan: Books? Me too. What was your favorite.
Charlie: I could try to be cool and make something up, but if I were honest… Flowers in the Attic. My copy literally fell apart.
Dan: Really? What was it that you loved most, exactly? Was it the gripping tale of teen incest or just the general fine quality of the prose?

Cyrus Rose (Wallace Shawn): So. Here comes the future princess! Now. What does that make us I wonder.
Blair: Well. As of now, nothing. In choosing me, Louis gave up his succession rights.
Eleanor Waldorf (Margaret Colin): Well fortunately we are here to throw you an engagement party so hopefully we can fix that.

Reina (Tika Sumpter): You must be Jack. Thank you for getting here so quickly.
Jack Bass (Desmond Harrington): It was nothing. Your father and I go way back. Which won’t stop me from inviting you to have this little chat somewhere more comfortable. Like your hotel room.
Reina: I see the Bass family resemblance.

Nate: What the hell?
Reina: Nate. I’m sure you know Jack.
Nate: Yes, unfortunately I do. But why do you?
Jack: I’ll be in touch to discuss details. {to Nate} I should have known you’d still be dining on my nephew’s leftovers.
Nate: You brought in Jack Bass?

Rufus: Hey. Your mom called and she was concerned that you were due for a refill on your medication, didn’t get it.
Charlie: Shoot. I was so excited about going to the fundraiser tonight with Dan that I forgot to pick it up on my way home. I’ll go right now.
Rufus: I already did. Ah, your mom told me that last time things went well you stopped taking it.
Charlie: And then they went from well to hell. Trust me, I never want that to happen again.

Sophie (Joanne Whalley): New York is always so grey. Even in the spring. And the angles everywhere, they are so… harsh. I’ll be happy to be back in Monaco.
Blair: The Glenn Ligon America exhibit at the Whitney is definitely worth the trip. There’s nothing grey or angular there. Except for the building.
Sophie: I think I’ve had my fill of your city’s ugliness for this trip.

Jack: And all this time I thought you hated Bart because of his sunny personality.
Russell (Michael Boatman): I see you’ve spoken with my daughter.
Jack: And apparently you haven’t.
Russell: No, She’s holding on to some anger about this whole situation.
Jack: Can’t say I blame her. Doesn’t mean I want to do business with her.
Russell: Which is why you called me.
Jack: What Reina’s proposing suits me fine. It’s just, your daughter’s history with Chuck, Nate Archibald crashing our meeting looking like he just ran away from home. The whole thing feels messy. Juvenile.
Russell: I couldn’t agree more.

Chuck: Your highness. You’ll forgive me if I’m too busy to bow.
Louis: I don’t appreciate the sarcasm. Or for that matter, anything else about you.

Louis: I want the truth.
Chuck: If you can’t trust Blair to tell you the truth you’ve got bigger problems than me. All I’ll say is, get used to it. Blair is nothing without her secrets.

Rufus: Don’t you have Blair’s engagement toast? I know you both have your issues.
Serena: I can’t force Blair to want me there.
Rufus: But, come on, it’s Blair. She might have trouble saying it most of the time, she loves you as much as she loves anybody. Of course she wants you there.

Sophie: Perhaps I judged you too harshly after the consulate affair. Cyrus has told me of your job at W and your straight A average, all while dedicating yourself to avian welfare.
Cyrus: You would never let a duck go hungry.

Blair: It’s true what they say about diamonds. They cut not only glass but porcelain as well.

Louis: I saw him before I came here.
Blair: If he told you something happened he’s lying. He just trying to get you to leave me.
Louis: I saw his hand. It’s not the ring that cut your face. Blair, how can you lie to protect someone who hurt you?

Louis: I hope you’ll join me at this party to make a formal debut. If you’re not ready to share your life—all of it—don’t show up. I’ll leave with my mother tonight.

Russell: What the hell is going on?
Chuck: Divine intervention. If you consider Satan divine.
Jack: You did get in one good punch.
Chuck: It was a long time coming.

Chuck: The time code is after my father left the building. You’re the one that locked the doors. My father didn’t set the fire that killed your wife. You did.

Dan: There are a million gold dresses.
Serena: Yeah but there’s only one with a Pamela Dennis label… cut out. Take it off.
Dan: This is obviously a misunderstanding.
Serena: Why are you defending her? You are not leaving here in that.
Charlie: If you didn’t want me to go to the party with Dan you didn’t have to humiliate me.
Serena: Okay, Charlie, this has nothing to do with Dan.
Dan: Good. Then you won’t mind if we leave together. Now.

Jack: Can we just call the cops? I’m hungry. And all you seem to have are olives and hallucinogenic mushrooms.

Jack: I can’t choose my entrée with Hallmark Hall of Fame playing in the background. I’m calling the cops.
Russell: Please! I’ll pay. I’ll give you Thorpe Enterprises, anything you want. But I can’t let Reina find out what I did.
Chuck: I’ll give you the same deal he did.
Jack: Oh, girls. Look. Can I at least get my plane fare out of this?
Chuck: Get out of New York and never come back.
Russell: Thank you. If Reina ever found out I don’t know what I’d do.

Blair: You may not be aware of this, but it’s not all light and bright in here. There are some places devoid of even a hint of sparkle.
Cyrus: Louis will love those too, one would hope.
Blair: Chuck was the only one who ever did. But he couldn’t see the rest. Louis said he wants it all but what kind of a princess schemes and plays sex games and drapes herself in old Hollywood movies?
Cyrus: Well, ah… pretending, as your stepfather, that I didn’t hear the sex games part, the truth is the only way that you’re going to know if Louis is the one is to tell him everything.
Blair: What if he doesn’t love me after I do?
Cyrus: Take it from someone that’s head-over-heels for a Waldorf woman, even everything is not enough.

Jack: Your dad was a nasty son-of-a-bitch, but I never thought for a second he’d actually gone O.J.
Chuck: Thank you for using your evil powers for good this time.
Jack: Ah, it was selfish really. I didn’t want anyone else playing with my punching bag.
Chuck: Dysfunction is kept in the family. It’s true.
Jack: Besides, what would I want with a company someone else owns half of. Or building in Brooklyn. Now, if you still had Blair things might be different.
Chuck: On that note, I’m going to cut this reunion short and try to find her before the nice guy actually wins.
Jack: I’m counting on you not to defile the Bass name and lose her to a family of titled circus performers.

Reina: I know what you did, Dad.
Russell: Honey, what are you talking about?
Reina: You’re the reason my mother is dead.

Rufus: Hey Serena. And… Vanessa? I’m not even going to ask what the two of you are doing together.

Gossip Girl: A dream is just a dream. Or is it? A place where fantasy and reality collide.

Gossip Girl: Everything you ever wanted seems possible. Until you realize, the nightmare’s just beginning. XOXO —Gossip Girl.