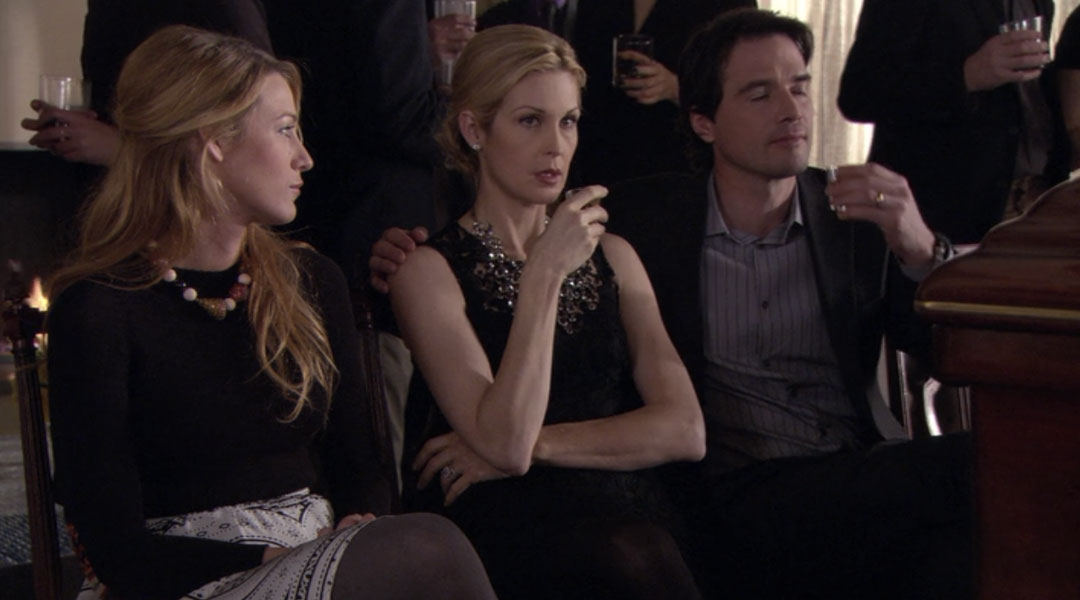 Gossip Girl: They say we should carry our secrets to the grave. But on the Upper East Side secrets are one thing you can never bury. Even when we think we know everything about the ones we love, there’s always a skeleton in their walk-in closet.

Nate: What’s got you in such a good mood?
Chuck: I recently found out who actually sent Gossip Girl the now infamous video of me and Blair at the royal wedding. Humphrey.
Nate: Wait, Dan?
Chuck: He was only too happy to let me and Serena take the fall so he could worm his way into Blair’s broken heart. Unfortunately for him, when she finds out the truth, his chances with her will be destroyed. And she will be mine again.
Nate: I don’t know, Chuck. Are you sure you want to start World War Waldorf right now?
Chuck: Why wouldn’t I?
Nate: Because you and I both know that nothing can actually happen between Dan and Blair for at least a year. So a lot can change in twelve months. Take the high road.

Phillip (Nick Cornish): I thought you said knowing everyone’s secrets as Gossip Girl was your dream come true.
Georgina (Michelle Trachtenberg): It was until I realized how much work it was.

Gossip Girl: Seems like this wake might end up being the wake up call you so desperately need.

Carol (Sheila Kelley): Lola. Do you mind telling me what you’re doing here?
Lola (Ella Rae Peck): Oh yeah. Well let’s see. This morning, while I was in the shower at Nate’s, Serena—the cousin I just found out about—tricked me into coming to the wake of the grandmother that I never knew existed. At the house of the family that you hid from me my entire life. Does that sum it up for you enough?
Carol: I know you blame me for everything. But I only lied to you because we’re not safe around these people. They’re materialistic monsters.
Lola: Oh. Says the woman who looted her own daughter’s trust fund.

Dan: I’m so sorry I lied.
Blair: You didn’t just lie, Humphrey. You let me blame my best friend and my ex for something they didn’t do. You embarrassed me in front of four hundred guests at my own wedding. You made me the target of tabloids and TSA agents. Not to mention you helped lock the bars of my gilded cage. Am I forgetting anything?
Dan: I should have told you the truth right away, but I swear I never meant to hurt you.
Blair: They what other reason could you have had to send in that video?
Dan: I spent every day leading up to that wedding saying you had to marry Louis even though you didn’t want to. I couldn’t stand to see you so unhappy. I only thought it would stop the wedding. I never thought you would leave it with me.
Blair: Us fighting like this is exactly what that Bassface wanted. But since Cyrus thinks everything will work out with the annulment—
Dan: What can I do? Is there anything? Just say the word and I will…
Blair: Just, shut up Humphrey. I forgive you. For now.

Blair: You slimy little Limey. I do not respond well to threats, and neither does Cyrus Rhodes. He fought in ‘Nam.
Estee (Charlotte Graham): You didn’t let me finish. His plan might not work but mine can. We can help each other, you and I.
Blair: Go on.
Estee: You don’t want Louis, that’s clear. But I do. The Prince and I, we are very close. We grew up together. But my station always prevented me from being a suitable choice for her serene highness, at least—
Blair: Until I came along.
Estee: Precisely. You’re a public relations disaster. Next to your Sarah Ferguson swan dive I’m Kate-bloody-Middleton.

Georgina: On the Upper East Side, money is never the real story. It’s usually just the X that marks the spot for what’s buried beneath it. If I were you two I’d start digging.
Charlie (Kaylee DeFer): What do you mean?
Georgina: I know it’s hard for you, but stop and think. Money doesn’t explain why you hide your daughter for eighteen years. Unless she was being paid to do so. And judging by her hair and her clothes, I’d say that wasn’t so.

Gossip Girl: Looks like there’s a doctor in the house. Who’s about to get his taste of his own medicine.

Blair: Oh my god. I was just bitch-slapped by Bridget Jones.

Ivy: Your mother knew all of my secrets. And she knew all of yours too. Maybe that’s why she left me everything.

Chuck: Ever since the accident I’ve been blaming myself, blaming Louis, but it’s Humphrey behind it all.
Blair: It’s not that simple.
Chuck: Yes, it is. And now that we know the truth there is nothing in our way.
Blair: Humphrey’s not the reason we’re not together. And neither is the dowry.
Chuck: Is this about saving my life again? Because we’re past that. You said you wanted to wait until the marriage was over. Now it’s over.
Blair: Chuck. I don’t blame you. And as crazy as this all has gotten, I know why you did everything.
Chuck: Because I love you.
Blair: And I love you. I always will. But that doesn’t mean I’m in love with you. At least not right now and not the way you need me to be. Not the way you deserve.

Carol: I’ve always hesitated going after Lola’s father for child support. He owes me, oh, almost twenty years.
William (William Baldwin): Good luck with that. Do you even know who he is?
Carol: I’m lookin’ right at him. Sorry I never told you. But not as sorry as you’re gonna be when Lily finds out what we were doing while you were married.

Gossip Girl: Spotted: Dr. van der Woodsen white as a sheet. Looks like the rules of this Rhodes just changed before his very eyes.

Ivy: I’m sorry. Am I interrupting something?
Rufus: Yes, you are. It’s been a long day for everyone and I think it’d be best if you left.
Ivy: I was just going to say the same thing. But to the two of you.
Rufus: What are you talking about?
Ivy: This is my apartment now.
Lily: That’s ridiculous. You think we’re just going to let you live here? This just all needs to get sorted out.
Ivy: Naturally. But you’ll have to do it from someplace else.

Gossip Girl: Attention Upper East Siders: After everything that happened today, I decided I need a little break to catch my breath. I’m sure you do too. But don’t worry, I’ll be back. I always am.

Dan: Well if you came here to tell me what a horrible person I am, you’re too late. I already know.
Blair: That’s not why I came.
Dan: You got back together with Chuck?
Blair: No.
Dan: Are you… moving to a desert island where there are no men at all? You’ll be living the rest of your life in peaceful solitude?
Blair: No. I told Chuck he doesn’t have my heart anymore. I realized it belongs to someone else.

Blair: So Dan, are you going to invite me in or what?
Dan: You just said my name.
Blair: Dan?
Dan: Yeah.

Gossip Girl: And when I return, I bet it’ll be a whole new world. XOXO. —Gossip Girl.