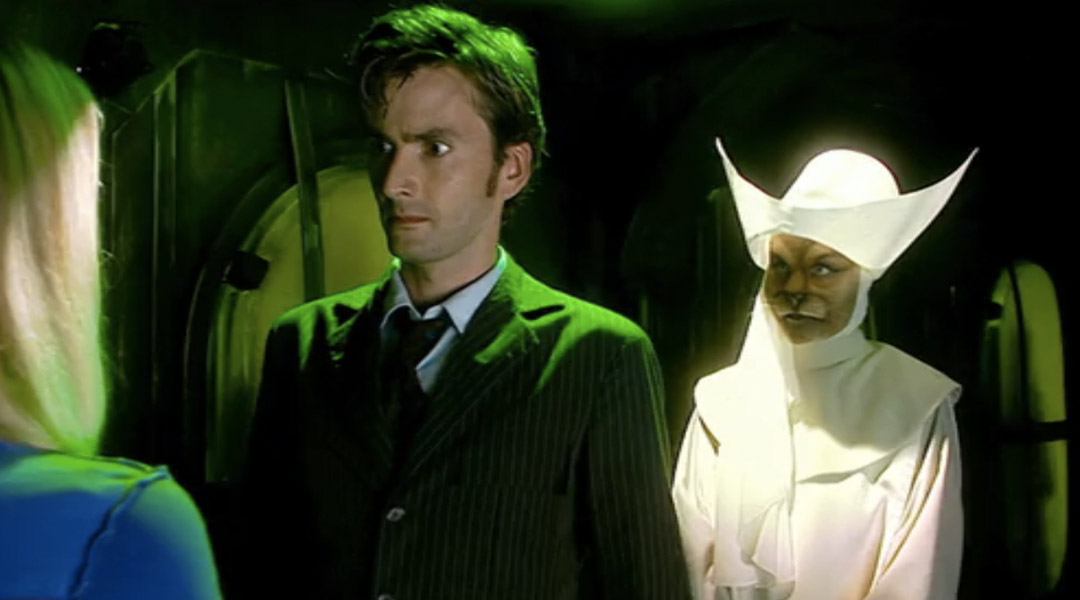 Rose: So where are we going?
The Doctor: Further than we’ve ever gone before.

The Doctor: So in the year five billion, the sun expands, the Earth gets roasted.
Rose: That was our first date.
The Doctor: We had chips.

Rose: Not exactly NHS.
The Doctor: No little shop. I like the little shop.
Rose: I’d have thought this far in the future they’d have cured everything.
The Doctor: The human race moves on, but so do the viruses. It’s an ongoing war.
Rose noticing the nurses: They’re cats.
The Doctor: Now, don’t stare. Look what you look like to them, all… pink and yellow.

Matron Casp (Dona Croll): But is there no one here you recognize? It’s rather unusual to visit without knowing the patient.
The Doctor: No. I think I found him.

Rose: What are you doing?
Cassandra (Zoë Wanamaker): The lady’s moving on. It’s goodbye trampoline and hello Blondie!

Novice Hame: Legend says that the Face of Boe has watched the Universe grow old. There’s all sorts of superstitions around him. One story says that just before his death the Face of Boe will impart his great secret. That he will speak those words only to one like himself.
The Doctor: What does that mean?
Novice Hame: It’s just a story.
The Doctor: Tell me the rest.
Novice Hame: It’s said he’ll talk to a wanderer. To the man without a home. The lonely god.

Cassandra in Rose: Curves. Oh baby. It’s like living inside a bouncy castle.

Cassandra in Rose: It’s the Doctor. The same doctor with a new face. Hypocrite! I must get the name of his surgeon.

Sister Jatt (Adjoa Andoh): It’s happened again. One of the patients is conscious.
Matron Casp: Well, we can’t have that.

Cassandra in Rose: Aren’t you lucky there was a spare. Standing room only.

Cassandra in The Doctor: Goodness me, I’m a man! So many parts. I hardly use. Oh. Ah! Two hearts. Oh baby, I’m beating out a Samba!

Rose: You get out of the Doctor’s body! He can think of something.
Cassandra in The Doctor: Nag nag nag. God it’s tedious inside your head. Hormone city.
Rose: We’re going to die!
Matron Casp: All our good work. All that healing! The good name of the sisterhood. You have destroyed everything!
Cassandra in The Doctor: Go and play with a ball of string.

Cassandra back in Rose: Oh, chav-tastic.

The Doctor: That was your last warning, Cassandra!
Cassandra in Rose: Inside her head. They’re so alone. They keep reaching out just to hold us. All their lives and they’ve never been touched.

Cassandra in Rose: You’re completely mad! I can see why she likes you.

Cassandra in Rose: What about you?
The Doctor: I’ve got an appointment. The Doctor is in.

The Doctor: The human race just keeps on going—keeps on changing. Life will out. Ha!