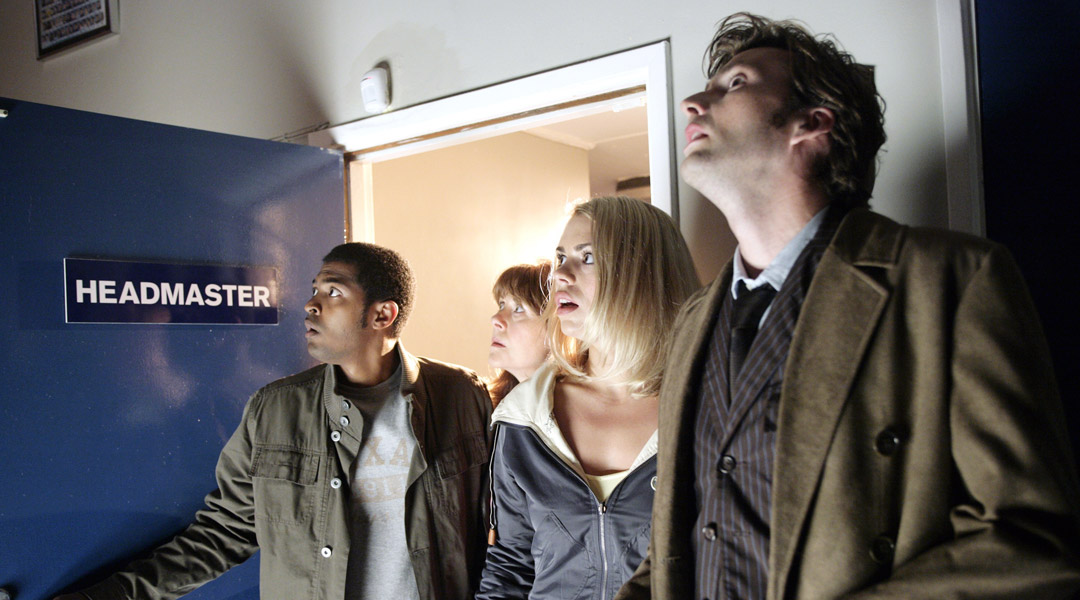 Mickey: You see what’s impressive is it’s been nearly an hour since we met her and I still haven’t said “I told you so”.
Rose: I’m not listening to you.
Mickey: Though I have prepared a little “I was right” dance I can show you later.

The Doctor: Don’t forget to leave the window open a crack.
Mickey: What? He’s metal.
The Doctor: I didn’t mean for him.

The Girl in the Fireplace

Rise of the Cybermen

The Doctor: We fell out of the Vortex. Through the Void into nothingness. We’re in some sort of noplace. A silent realm. A lost dimension.
Mickey looking outside: Otherwise known as London.

The Doctor: This is not your world.
Mickey: But if the date’s the same…. It’s parallel, right? Am I right, like a parallel Earth where they’ve got Zeppelins? Am I right? I’m right, aren’t I?
The Doctor: Must be.
Rose: So a parallel world where—
Mickey: Oh come on, you’ve seem it on films. Like an alternative to our world, where everything’s the same but a little bit different. Like, I don’t know, traffic lights are blue. Tony Blair never got elected.
Rose: And he’s still alive. A parallel world where my dad’s still alive.

Ricky: You’re talking to London’s most wanted. But target number one is Lumic and we are going to bring him down.
Mickey: From your kitchen.
Ricky: Have you got a problem with that?
Mickey: No. It’s a good kitchen.

The Age of Steel

Alt-Pete: I thought I was broadcasting to the security services. What do I get? Scooby Doo and his gang. They’ve even got the van.
Mickey: No no no. But the Preacher’s not what he’s doing. Ricky said he’s London’s most wanted.
Ricky: Yeah that’s not exactly…
Mickey: Not exactly what?
Ricky: I’m London’s most wanted for parking tickets.
Pete: Oh great.
Ricky: Yeah, they were deliberate. I was fighting the system. Park anywhere, that’s me.
The Doctor: Good policy. I do much the same. I’m the Doctor, by the way. If anyone’s interested.
Rose: And I’m Rose. Hello.
Pete: Even better. That’s the name of my dog. Still, at least I’ve got the catering staff on my side.

Rose: We’ve got to get in there and shut it down.
Mickey: How do we do that?
The Doctor: Oh, I’ll think of something.
Mickey: You’re just making this up as you go along.
The Doctor: Yep. But I do it brilliantly.

Mickey: What about me?
The Doctor: Mickey. You can, um…
Mickey: Stay out of trouble and be the tin dog? No, those days are over. I’m going with Jake.
Jake: I don’t need you, idiot.
Mickey: I’m not an idiot! You got that? I’m offering to help.
Jake: Whatever.
The Doctor: Mickey. Good luck.

Jake: Two guards. We can take them.
Mickey: Don’t kill them.
Jake: Who put you in charge?
Mickey: If you kill them, what’s the difference between you and the Cybermen?

Mickey: There’s gotta be more guards on board.
Jake: Then let’s go get them.

Rose: Mickey, where’d you learn to fly that thing?!
Mickey: Playstation. Just hold on Rose. I’m coming to get you.

Mickey: Thing is, I’m staying.
The Doctor: You’re doing what?
Rose: You can’t.
Mickey: It sort of balances out, ’cause this world lost its Ricky. But there’s me. And there’s work to be done with all those Cybermen still out there.
Rose: But you can’t stay.
Mickey: Rose, my Gran’s here. She’s still alive, my old Gran. Remember her? She needs me.
Rose: What about me, what if I need you?
Mickey: Yeah but Rose, you don’t. It’s just you and him isn’t it? We had something a long time ago but… not anymore.

Mickey: Jake, you’ll want to watch this. That’s the Doctor. In the TARDIS. With Rose Tyler.

Mickey: I know it’s not easy with my face looking exactly like Ricky. But I’m a different man, I’m not replacing him. But we can remember him by fighting in his name. Of all the Cyberfactories out there, d’you think there’d be one in Paris?
Jake: Yeah.
Mickey: Then let’s go liberate Paris.
Jake: What, you and me? In a van?
Mickey: Nothing wrong with a van. I once saved the Universe with a big yellow truck.

Raj: Samuel, what are you doing?
Mickey: The name’s Mickey. Mickey Smith. Defending the Earth.

Mickey: The Time Lords put the Daleks in there? What for?
The Doctor: It’s a prison ship.
Rose: How many in there?
The Doctor: Millions.