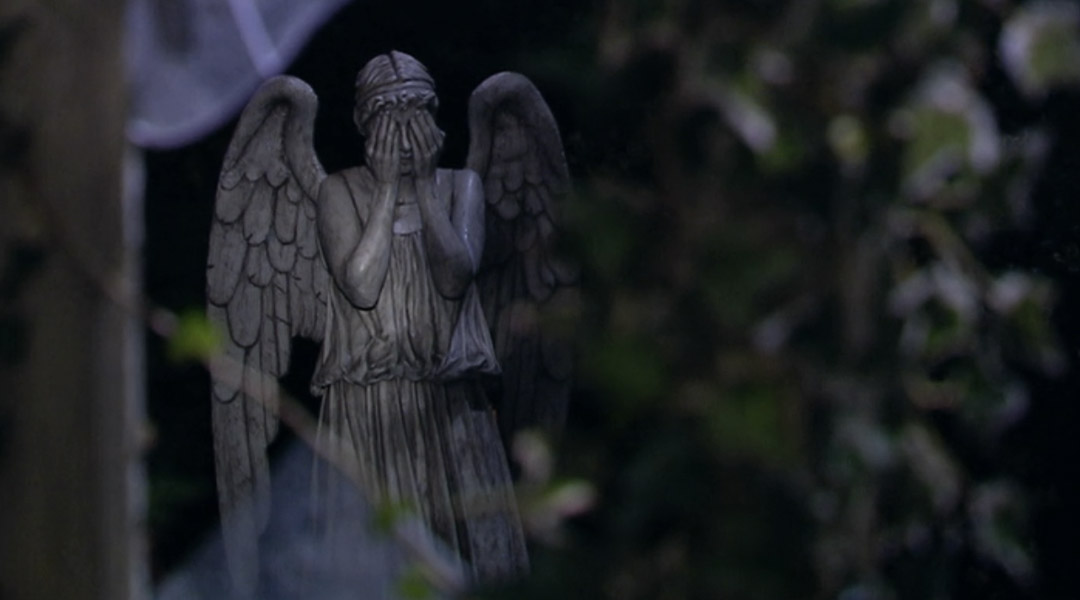 Kathy: What are you doing? It could be a burglar.
Sally: A burglar who rings the doorbell?

Larry: I was just checking to see if they’re all the same.
Sally: What are the same. What is this? Who is he?
Larry: An easter egg.

Sally: But what does he do?
Larry: Just sits there, making random remarks. It’s like we’re hearing half the conversation. Me and the guys are always trying to work out the other half.
Sally: When you say you and the guys you mean the internet, don’t you?
Larry: How’d you know?
Sally: Spooky, isn’t it?

Sally: Aren’t you on duty, Detective Inspector Shipton?
Billy Shipton (Michael Obiora): Nope. Knocked off before I left. Told them I had a family crisis.
Sally: Why?
Billy Shipton: Because life is short and you are hot.

The Doctor: Welcome!
Billy: Where am I?
The Doctor: 1969. Not bad as it goes. You’ve got the moon landing to look forward to.
Martha: Oh, the moon landing’s brilliant! We went four times. Back when we had transport.
The Doctor: Working on it.
Billy: How did I get here?
The Doctor: Same way we did. Touch of an angel. Same one probably, since you ended up in the same year. {Billy tries to stand} No, no. No no no. Don’t get up. Time travel without a capsule. Nasty. Catch your breath, don’t go swimming for half an hour.
Billy: I don’t— I can’t.
The Doctor: Fascinating race, the weeping angels. The only psychopaths in the Universe to kill you nicely. No mess, no fuss. They just zap you into the past and let you live to death. The rest of your life used up and blown away in the blink of an eye. You die in the past and in the present they consume the energy of all the days you might have had. All your stolen moments. They’re creatures of the abstract. They live off of potential energy.
Billy: What in God’s name are you talking about?
Martha: Trust me. Just nod when he stops for breath.
The Doctor: Tracked you down with this. This is my Timey-Wimey detector. Goes ding when there’s stuff. Also, it can boil an egg at thirty paces. Whether you want it to or not, actually. So I’ve learned to stay away from hens. It’s not pretty when they blow.
Billy: I don’t understand. Where am I?
Martha: 1969, like he said.
The Doctor: Normally I’d offer you a lift home but somebody nicked my motor. So I need you to take a message to Sally Sparrow. And I’m sorry Billy. I am very very sorry. It’s gonna take you awhile.

Billy (Louis Mahoney): It was raining when we met.
Sally: It’s the same rain.

Billy: He told me all those years ago that we’ll only meet again—this one time—on the night I die.
Sally: Oh Billy.
Billy: It’s kept me going. I’m an old sick man, but I’ve had something to look forward to. Life is long and you are hot.

Sally: The Doctor.
Larry: Who’s the doctor?
Sally: He’s the Doctor.
The Doctor: Yep, that’s me.
Sally: Okay, that was scary.
Larry: No, it sounds like he’s replying but he always says that.
The Doctor: Yes I do.
Larry: And that.
The Doctor: Yep. And this.
Sally: He can hear us! Oh my god, you can really hear us!
Larry: Of course he can’t hear us. Look, I’ve got a transcript. See? Everything he says. “Yep. That’s me.” “Yes I do.” “Yep. And this.” Next it’s “Are you going to read out whole thing?”
The Doctor: —Are you going to read out the whole thing?
Larry: Sorry.
Sally: Who are you?
The Doctor: I’m a time traveller. Or I was. I’m stuck. In 1969.
Martha: We’re stuck! All of space and time he promised me and now I’ve got a job in a shop, I’ve gotta support him!
The Doctor: Martha!
Martha: Sorry.
Sally: I’ve seen this bit before.
The Doctor: Quite possibly.
Sally: 1969?. That’s where you’re talking from?
The Doctor: ‘Fraid so.
Sally: But you’re replying to me. You can’t know exactly what I’m going to say 40 years before I say it.
The Doctor: 38.
Larry: I’m getting this down. I’m writing in your bits.
Sally: How? How is this possible? Tell me! Not so fast!
The Doctor: People don’t understand time. It’s not what you think it is.
Sally: Then what is it?
The Doctor: Complicated.
Sally: Tell me.
The Doctor: Very complicated.
Sally: I’m clever. And I’m listening. And don’t patronize me because people have died and I’m not happy. Tell me!
The Doctor: People assume that time is a strict progression of cause to effect. But actually from a non-linear, non-subjective viewpoint it’s more like a big ball of wibbly-wobbly timey-wimey… stuff.
Sally: Yeah, I’ve seen this bit before. You said that sentence got away from you.
The Doctor: It got away from me, yeah.
Sally: Next thing you’re going to say is “Well I can hear you.”
The Doctor: Well I can hear you.
Sally: This is impossible!
Larry: No, it’s brilliant!
The Doctor: Well not hear you exactly, but I know everything you’re going to say.
Larry: Always give me the shivers, that bit.
Sally: How can you know what I’m going to say?
The Doctor: Look to your left.
Larry: What does he mean by “look to your left”? I’ve written tons about that on the forums. I think it’s a political statement.
Sally: He means you. What are you doing?
Larry: I’m writing in your bits. That way I’ve got a complete transcript of the conversation. Wait until this hits the ‘net. This will explode the egg forums.

Larry: “The angels have the phonebox”. That’s my favorite. I’ve got that on a t-shirt.

The Doctor on the DVD: Your life could depend on this. Don’t blink. Don’t even blink. Blink and you’re dead. They are fast. Faster than you can believe. Don’t turn your back, don’t look away, and don’t blink! Good luck.

Sally: Remember what he said: don’t even blink.
Larry: Who blinks? I’m too scared to blink.

The Doctor: Look, sorry. I’ve got a bit of a complex life. Things don’t always happen to me in quite the right order. Gets a bit confusing at times. Especially at weddings. I’m rubbish at weddings. Especially my own.

Sally: Oh, for God’s sake, it was me all along. You got it from me.