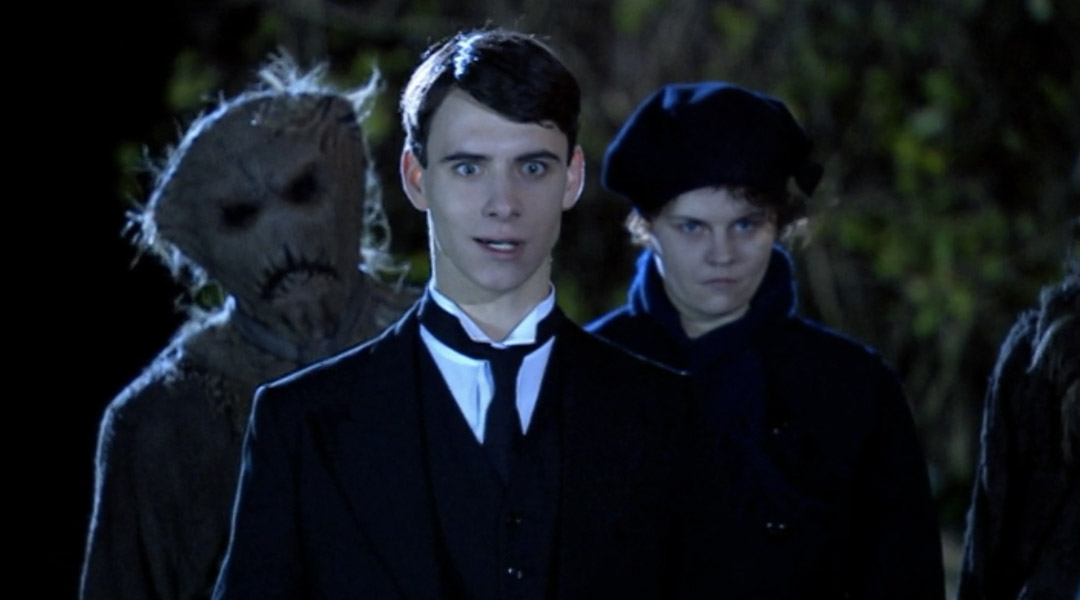 The Watch to Latimer : Hold me. Keep me safe. Keep me dark. Keep me closed. The time is not right. Not yet. Not while the family is abroad. Danger.

Headmaster: So. Baines. And one of the cleaning staff. There’s always a woman involved. Am I to gather that some practical joke has got out of hand?
Brother/Baines (Harry Lloyd): Headmaster, sir. Good evening, sir. Come to give me a caning, sir? Would you like that, sir?
Headmaster: Keep a civil tongue, boy. Now come on, everyone. I suspect alcohol has played its part in this. Let’s all just calm down.

Headmaster: You speak with someone else’s voice, Baines. Who might that be?
Brother: We are the Family of Blood.
Headmaster: Mr. Smith said there had been deaths.
Brother: Yes sir. And they were good sir.
Headmaster: Well I warn you, the school is armed.
Brother: All your little tin soldiers. But tell me sir, will they thank you?
Headmaster: I don’t understand.
Brother: What do you know of history, sir? What do you know of next year?
Headmaster: You’re not making sense, man—
Brother: 1914, sir. Because the Family has traveled far and wide looking for Mr. Smith, and oh the things we have seen. War is coming. In foreign fields, war of the whole wide world with all your boys falling down in the mud. Do you think they will thank the man who taught them it was glorious?
Headmaster: Don’t you forget, boy, I have been a soldier. I was in South Africa. I used my dead mates as sandbags. I fought with the butt of my rifle when the bullets ran out, and I would go back there tomorrow for King and country!

Martha: I know it sounds mad. When the Doctor became human he took the alien part of himself and put it inside the watch—only it’s not really a watch, it just looks like a watch.
Joan Redfern (Jessica Hynes): And alien means not from abroad, I take it.
Martha: The man you call John Smith, he was born on another world.
Joan: A different species.
Martha: Yeah.
Joan: Then tell me in this fairytale, who are you?
Martha: Just a friend. I’m not— I mean, you haven’t got a rival. As much as I might…. Just his friend.
Joan: Human, I take it.
Martha: Human. And more than that. I don’t just follow him around, I’m trained to be a doctor. Not an alien doctor, a proper doctor. A doctor of medicine.
Joan: Well that certainly is nonsense. Women might train to be doctors, but hardly a skivvy and hardly one of your color.
Martha: Oh, do you think?

Father: Son of mine, wife of mine,
Brother: Father of mine. What have you found?
Father: His TARDIS. The Doctor can’t escape.

John Smith: How can you think I’m not real. When I kissed you, was that a lie?
Joan: No it wasn’t.
John Smith: This doctor sounds like some, some romantic lost Prince. would you rather him? Am I not enough?
Joan: That’s not true. Never!

Hutchinson (Tom Palmer): It could mean the difference between life and death for us.
Latimer (Thomas Sangster): Not for you and me.
Hutchinson: What are you talking about?
Latimer: We go to battle together. We fight alongside. I’ve seen it. Not here, not now.
Hutchinson: What’s that supposed to mean?
Latimer: It means you and I both survive this. And maybe, maybe I was given this watch so I could help. {leaving the front line}. Sorry.
Hutchinson: Latimer, you filthy coward.
Latimer: Oh yes, sir. Every time.

Sister (Lauren Wilson): What have you got there?
Latimer: Nothing.
Sister: Show me, little boy.
Latimer: I reckon whatever you are, you’re still in the shape of a girl. How strong is she? Does she really want to see this {he opens the watch and an image from Runaway Bride comes through}.

Martha: You recognize it, don’t you?
John Smith: I’ve never seen it in my life.
Martha: Do you remember its name?
Joan: I’m sorry, John. But you wrote about it. The Blue Box. You dreamt of a Blue Box.
John Smith: I’m not… I’m John Smith. That’s all I want to be. John Smith. With his life and his job. And his love. Why can’t I be John Smith? Isn’t he a good man?
Joan: Yes, yes he is.
John Smith: Why can’t I stay?
Martha: We need the Doctor.

John Smith: You’re this Doctor’s companion. Can’t you help? What exactly do you do for him? Why does he need you?
Martha: Because he’s lonely.
John Smith: And that’s what you want me to become?

Joan: What if it’s them?
Martha: I’m not an expert, but I don’t think scarecrows knock.

Martha: Hold it.
John Smith: I won’t.
Martha: Please, just hold it. It told me to find you. It wants to be held.
Joan: You’ve had this watch all this time? Why didn’t you return it?
Latimer: Because it was waiting. And because I was so scared… of the Doctor.
Joan: Why?
Latimer: Because I’ve seen him. He’s like fire and ice and rage. He’s like the night and the storm and the heart of the sun.
John Smith: Stop it!
Latimer: He’s ancient and forever. He burns at the center of time and he can see the turn of the Universe.
John Smith: Stop it! Just stop it!
Latimer: And… he’s wonderful.

Joan: I’ve still got this. The journal.
John Smith: Those are just stories.
Joan: Now we know that’s not true.

Martha: He gave me a list of things to watch out for. That wasn’t included.
John Smith: Falling in love? That didn’t even occur to him?
Martha: No.
John Smith: And what sort of man is that? And now you expect me to die?
Martha: It was always going to end though. The Doctor says the Family’s got a limited life span. That’s why they need to consume a Time Lord. Otherwise, three [ropes] and they die. Like mayflies, he said.
John Smith: So your job was to execute me?
Martha: People are dying out there! They need him, and I need him. ‘Cause you’ve got no idea what he’s like. I’ve only just met him—it wasn’t even that long ago, but… he is everything. He is just everything to me and he doesn’t even look at me, but I don’t care. ‘Cause I love him to bits. And I hope to god he won’t remember me saying this.

John Smith: He won’t love you.
Joan: If he’s not you then I don’t want him to.

John Smith: Did you see that?
Joan: The Time Lord has such adventures. But he could never have a life like that.
John Smith: And yet I could.

Mother (Rebekah Staton): He didn’t just make himself human. He made himself an idiot.
Brother: Same thing, isn’t it?

Brother: It’s empty!
The Doctor: Where’s it gone?
Brother: You tell me. {he chucks the watch and the Doctor deftly catches it}
The Doctor: Oh, I think the explanation might be you’ve been fooled by a simple olfactory misdirection. Little bit like ventriloquism of the nose. It’s an elementary trick in certain parts of the galaxy, but it has gotta be said, I don’t like the look of that hydrochronometer. It seems to be indicating that you’ve got energy feedback all through the retrostabilizers feeding back into the primary heat converters. Oh! ‘Cause if there’s one thing you shouldn’t have done, you shouldn’t have let me press all those buttons. But in fairness, I will give you one word of advice: run.

Brother: He never raised his voice. That was the worst thing. The fury of the Time Lord. And then we discovered why. Why this Doctor who had fought with gods and demons, why he’d run away from us and hidden. He was being kind. He wrapped my father in unbreakable chains, forged in the heart of a dwarf star. He tricked my mother into the event horizon of a collapsing galaxy, to be imprisoned there forever. He still visits my sister— once a year, every year. I wonder if one day he might forgive her. But there she is! Can you see her? He trapped her inside a mirror. Every mirror. If ever you look at your reflection and see something move behind you—just for a second—that’s her. That’s always her. As for me, I was suspended in time. And the Doctor put me to work standing over the fields of England, as their protector. We wanted to live forever. So the Doctor made sure that we did.

The Doctor: Everything that John Smith is and was, I’m capable of that too.

Joan: Where is he? John Smith?
The Doctor: He’s in here somewhere.
Joan: Like a story? Could you change back?
The Doctor: Yes.
Joan: Will you?
The Doctor: No.
Joan: I see.

Joan: He was braver than you, in the end. That ordinary man. You chose to change. He chose to die.

Joan: Answer me this: if the Doctor had never visited us, never chosen this place—on a whim—would anyone have died? … You can go.

Latimer: It’s coming, isn’t it? The biggest war ever.
Martha: You don’t have to fight.
Latimer: I think we do.
Martha: But you could get hurt.
Latimer: Well so could you, travelling around with him, but it’s not going to stop you.
The Doctor: Tim, I’d be honored if you’d take this.
Latimer: I can’t hear anything.
The Doctor: No. It’s just a watch now. But keep it with you. For good luck.

Latimer: One minute past the hour. It’s now. Hutchinson, this is the time. It’s now! To the right! To the right! {he pushes him to the right} We made it. Thank you, Doctor. Come on, old chap.
Hutchinson: Leave me. I’m not going to make it.
Latimer: Oh yes you are. Didn’t I promise you all those years ago? Now come on. And that’s an order!