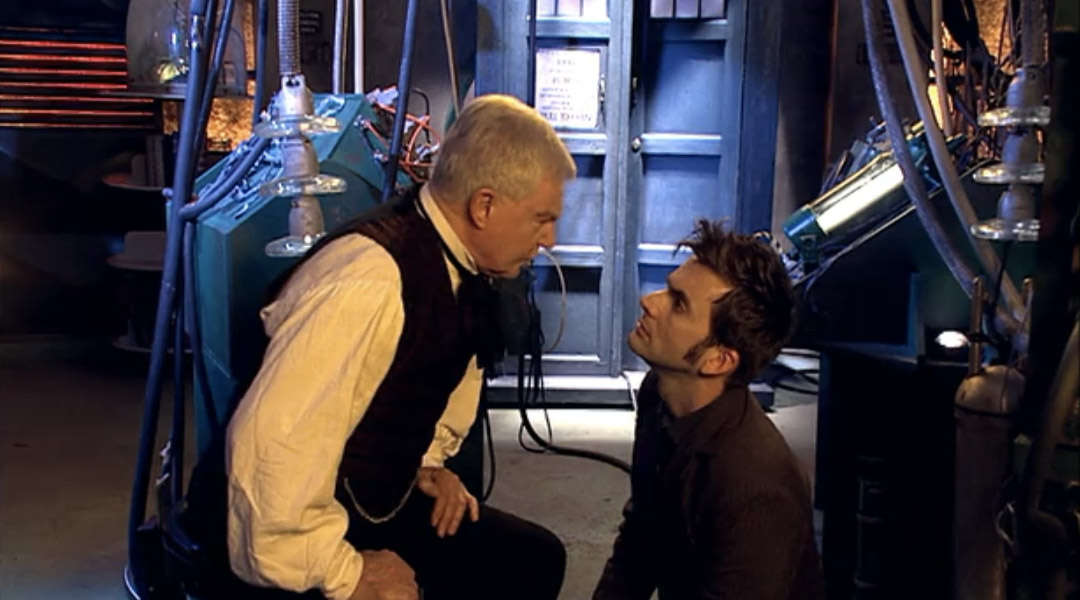 The Doctor: The year one hundred trillion. That’s impossible.
Martha: Why? What happens then?
The Doctor: We’re going to the end of the universe.

Professor Yana (Derek Jacobi): One more lost soul dreaming of Utopia.
Chantho (Chipo Chung): Chan- You mustn’t talk as though you’ve given up. -tho
Professor Yana: No no. Indeed. Here’s to it. Utopia. Where it is to be hoped the coffee is less sour. Will you join me?
Chantho: Chan- I am happy drinking my own internal milk. -tho
Professor Yana: Yes well, that’s quite enough information. Thank you.

The Doctor: I don’t think Time Lords came this far. We should leave. We should really really go. grins and runs outside the TARDIS

Martha: It’s a bit odd though. Not very one hundred trillion. That coat’s more like World War II.
The Doctor: I think he came with us.
Martha: How d’you mean? He’s from Earth?
The Doctor: Must have been clinging to the outside of the TARDIS. All the way through the vortex. Wow, that’s very him.
Martha: What, do you know him?
The Doctor: A friend of mine. Used to travel with me.

Jack: Captain Jack Harkness. And who are you?
Martha: Martha Jones.
Jack: Nice to meet you Martha Jones.
The Doctor: Oh don’t start!
Jack: I was only saying hello.
Martha: I don’t mind.
Jack: Doctor.
The Doctor: Captain.
Jack: Good to see you.
The Doctor: And you. Same as ever. Although. Have you had work done?
Jack: You can talk.

Martha: But the thing is, how come you left him behind Doctor?
The Doctor: I was busy.
Martha: Is that what happens though, seriously? You just get bored of us one day and disappear.
Jack: Not if you’re blonde.
Martha: Oh she was blonde! Oh, what a surprise.
The Doctor: You two! We’re at the end of the Universe. Right at the edge of knowledge itself. And you’re busy blogging!

Jack: They must have an atmospheric shell. We should be frozen to death.
The Doctor: Well, Martha and I maybe. Not so sure about you, Jack.

Jack: Oh, don’t tell him to put his gun down.
The Doctor: He’s not my responsibility.
Jack: And I am? Ha, that makes a change.

Jack: Captain Jack Harkness.
The Doctor: Stop it!
Jack: Can’t I say hello to anyone?
Chantho: Chan- I do not protest -tho.
Jack: Maybe later.

Martha: Oh my god. You’ve got a hand. A hand in a jar. A hand. In a jar. In your bag.
The Doctor: But that’s my hand!
Jack: I said I had a Doctor detector.
Chantho: Chan- Is this a tradition amongst your people -tho?
Martha: Not on my street. What d’you mean that’s your hand? Youve got both your hands. I can see them.
The Doctor: Long story. I lost my hand. Christmas Day. I was in a fight.
Martha: What and you.. grew another hand?
The Doctor: Um. Yeah I did, yeah. waves Hello.
The Professor: Might I ask what species are you?
The Doctor: Time Lord. Last of. Heard of them? Legend? Heard of them? Not even a myth? Blimey, end of the universe is a bit humbling.

Martha: You grew another hand.
The Doctor: waves Hello again!

Jack: So what about those things outside? The Beastie Boys. What are they?
The Professor: We call them the Future Kind. Which is a myth in itself. But it’s feared they’re what we will become. Unless we reach Utopia.
The Doctor: And Utopia is…?
The Professor: Oh, every human knows Utopia. Where’ve you been?
The Doctor: Bit of a hermit.
The Professor: A hermit? With friends?
The Doctor: Hermits United. We meet up every ten years. Swap stories about caves. It’s good fun. For a hermit.

The Doctor: You’d give your life so they could fly.
The Professor: Oh, I think I’m a little too old for Utopia. Besides, I think it’s time I got some sleep.

The Doctor: It strikes me, Professor, you’ve got a room which no man can enter without dying. Is that correct?
The Professor: Yes.
The Doctor: Well. Jack is revived I think I’ve got just the man.
Jack: Was someone kissing me?

The Doctor: What are you taking your clothes off for?
Jack: I’m going in.
The Doctor: From the looks of it, I’d say the stet radiation doesn’t affect clothing, only flesh.
Jack: Well. I look good though. How long have you known?
The Doctor: Ever since I ran away from you. Good luck.

The Doctor: When did you realize it?
Jack: Earth. 1892. Got in a fight on Ellis Island. A man shot me through the heart. Then I woke up.

Jack: In the end I got the message: I’m the man who can never die. And all that time you knew.
The Doctor: That’s why I left you behind. It’s not easy, just looking at you, Jack.
‘Cause you’re wrong.
Jack: Thanks.
The Doctor: You are. I can’t help it.

Jack: The last thing I remember, back when I was mortal, I was facing three Daleks. Death by extermination. And then I came back to life. What happened?
The Doctor: Rose.
Jack: I thought you’d sent her back home.
The Doctor: She came back. Opened up the heart of the TARDIS and absorbed the Time Vortex itself.
Jack: What does that mean exactly?
The Doctor: No one’s ever meant to have that power.
If a Time Lord did that he’d become a god—a vengeful god. But she was human. Everything she did was so human. She brought you back to life. But she couldn’t control it. She brought you back forever. That is something, I suppose. The final act of the Time War was life.

Jack: I went to her estate in the 90s. Just once or twice. Watched her growing up. Never said hello. Timelines and all that.

The Doctor: Do you want to die?
Jack: This one’s a little stuck.
The Doctor: Jack.
Jack: I thought I did. I don’t know. But this lot—you see them out here surviving. And that’s fantastic!
The Doctor: You might be out there somewhere.
Jack: I could go meet myself.
The Doctor: Well. The only man you’re ever going to be happy with.
Jack: This new regeneration, it’s kinda cheeky!

The Face of Boe (Struan Rodger): You Are Not Alone.

The Doctor: I’m begging you. Everything’s changed! It’s only the two of us! We’re the only ones left. Just let me in!
The Professor: Killed by an insect. A girl. How inappropriate. Still. If the Doctor can be young and strong then so can I. The Master. Reborn.