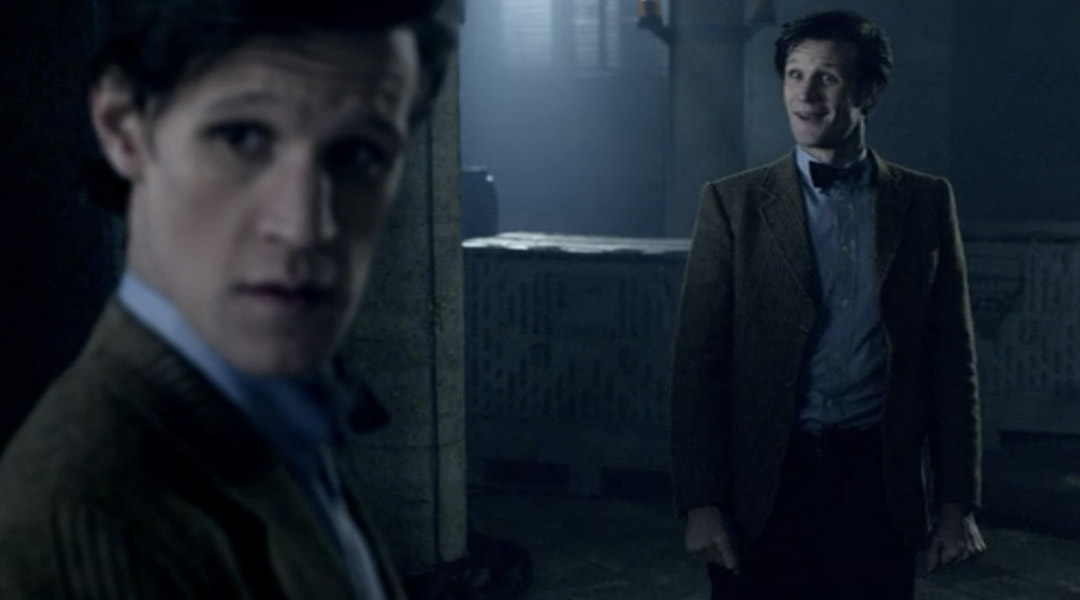 Buzzer (Marshall Lancaster): I think I liked it better when they were being noisy.

Amy: Are you sure there aren’t any weapons they could get to? Like big guns with bits on it.
Buzzer: Yeah, big guns would be good right now.
Jimmy: Why would we have guns? We’re a factory. We mine— {the door starts sizzling}
Amy: Acid.

The Doctor: Yowza! An escape route! You know I’m starting to get a sense of just how impressive it is to hang out with me.
The Doctor Ganger: Do we tend to say Yowza?
The Doctor: That’s enough. Let it go. Okay? We’re under stress.

Ganger Cleaves: Damned headaches! I’m so tired.
Ganger Jim: They could be anywhere. How’re we going to find th—
Ganger Cleaves: Think about it. With all that gas out there my guess would be the evac tower. Get above it, try to get power up.
Ganger Jim: So? Let’s stop them.
Ganger Cleaves: It’s a narrow doorway. I could defend it easy enough. So could she.

Amy: I think I coughed so hard I pulled a muscle or something. It’s okay, it’s better.

Ganger Jen (Sarah Smart): I tried to block the memories, but now I know I must remember. It’s the eyes. The eyes are the last to go.
Ganger Jim: What are you talking about?
Ganger Jen: When they destroy us, the eyes are the last things to melt. And there’s one question in those eyes. “Why?” Why should we suffer for the sake of human beings?
Ganger Dicken (Leon Vickers): I heard in India there’s over ten million ‘gangers.
Ganger Jen: We can reach out. Inspire them. To rise up.
Ganger Cleaves: Revolution? Look. I just, I just want to be left to live in peace, Jen.
Ganger Jen: They will melt you. Have you become so human that you’ve forgotten the truth? Don’t you remember all the times you were decommissioned? Or should I say executed?
Ganger Cleaves: No. We don’t remember.
Ganger Jen: Well I do. It’s us or them.
Ganger Jim: She’s right.
Ganger Jen: I have a plan. And it will destroy them all.

Cleaves: Can you really get the power back?
The Doctor Ganger: Oh, there’s always some power floating around—
The Doctor: Sticking to the wires, like bits of lint.
Amy: Could you stop finishing each other’s—
The Doctor: Sentences? No promises.

Amy: No, but hang on. You said the TARDIS was stuck in acid. So won’t she be damaged?
The Doctor: Nah. She’s a tough old thing. Tough old sexy thing.
The Doctor Ganger: Tough, dependable, sexy.
Amy: Ew.

Cleaves: You’ll need to airlift us off of the evac tower. And Captain, any further transmissions sent by me must come with the following code word. I’m typing it in case they’re listening in.
Ganger Cleaves: Oof. See how smart I am. That’s why I’m paid the big bucks.
Captain: Got it. We’ll swing in, get you out and decommission the Flesh.
Ganger Cleaves: Jennifer’s right. We’re gonna have to fight if we want to survive.

Amy: We’re not leaving without him.
Buzzer: I want him found too, but it’s about casualties, innit? Can’t be helped.

The Doctor: Amy. What happened?
Amy: It’s her again.
The Doctor: It’s who again?
Amy: There’s a woman I keep seeing. A woman with an eye patch. And she has this habit of sliding walls open and staring at me. Doctor?
The Doctor: Nothing.
Amy: Doesn’t seem like nothing.
The Doctor: It’s a time-memory. Like a mirage. It’s nothing to worry about.

Amy: I’m sorry, what I said about you almost being the Doctor. It’s just really hard because I’ve been through so much with him. I’ve even seen… Ive even seen the moment of his… Can you die? If you really are the same then you can die, you can be killed and… I might have seen that happen.
The Doctor Ganger: Why.
Amy: Why? Because you invited us to see it. Your death. {He turns around and pins her to the wall.}
The Doctor Ganger: Why?!
Amy: You’re hurting me!
The Doctor Ganger: It’s all the eyes say! Why! I can feel them! As they work each day knowing the time was coming for them to be thrown away again. Not again! Please! And then they are destroyed and they feel death. And all they can say is “Why!”

The Doctor: Hold on a minute. Hold your horses. I thought I’d explained this. I’m him, he’s me.
Cleaves: Doctor. We have no issue with you. When it comes to your ‘ganger…
The Doctor: Don’t be so absurd.
Cleaves: Buzzer.
Buzzer: Sure boss. Take a seat, mate.
The Doctor Ganger: Nice barrel. Very comfy. Why not.

Rory: Why can’t you just tell me the truth? The Doctor wants you to live, and I’m with him all the way.
Jen: That’s a lovely idea, Rory. But the Flesh want to kill us now.

Cleaves: You can’t let him go! Are you crazy?
The Doctor: Am I crazy, Doctor?
The Doctor Ganger: Well you did once plumb your brain into the core of an entire planet just to halt its orbit and win a bet.
Amy: He can’t go rescue them. I’m going.
The Doctor: Do you know, I want him to go. And I’m rather adamant.

Jen: It’s just too tough for a girl to turn. Are you feeling strong?
Rory: I’ll break out the big guns.

Cleaves: Waiting for results, so let it go.
The Doctor: It’s a very deep parietal clot.
Cleaves: How can you possibly—? Inoperable?
The Doctor: On Earth, yes.
Cleaves: Well seeing as Earth’s all that’s on… offer. Hm. I’m no healthy spring chicken and you’re no weather man. Right?

The Doctor: The eyes have it.
Amy: Why are they here?
The Doctor: To accuse. Us.
Cleaves: Ignore them. It’s not far.

Buzzer: I should have been a postman like my dad.

Buzzer: You killed her. You killed our Jen.
Ganger Jen: And I’m stronger, Buzz. I can grow.

The Doctor: It’s a chemical chain reaction now. I can’t stop it. This place is going to blow sky high.
Cleaves: Exactly how long have we got?
The Doctor: An hour? Five seconds? Ah, somewhere in between.

Ganger Cleaves: We have to be free.
Cleaves: I’m sorry too, Miranda. Of all the humans in all the world, you had to pick the one with the clot! But hey, them’s the breaks. Welcome to the human race.

Ganger Jen: Once we get to the mainland the real battle begins. The humans won’t stand a chance. You’re one of us, Doctor. Join the revolution.

The Doctor Ganger: Hello! Adam! I’m the Doctor. Well. Other Doctor… Or Smith. It’s complicated. And boring. Anyway, who cares! It’s your birthday!
Adam (Edmond Moulton): Yay!
The Doctor Ganger: Yay! Now, have you been getting up very early and jumping on the bed?
Adam: Yes, really high.
The Doctor Ganger: I expect chocolate for breakfast. If you don’t feel sick by mid-morning you’re not doing it right. Now. I think you want to speak to Dad.
Adam: Yes yes yes yes yes.

The Doctor Ganger: You’ll do Jimmy. What does the other Jimmy matter now? You’re both the same, aren’t you?

Ganger Jen: You’ve tricked him into an act of weakness, Doctor.
The Doctor Ganger: No. I’ve helped him into an act of humanity. Anyone else like the sound of that? “Act of humanity”.
Ganger Cleaves: Dicken, drain the acid well in crypt one.
Ganger Jen: Don’t you dare!
Ganger Cleaves: I’ve had it with this. What’s the point in this ridiculous war? Look at you, Jen. You were a sweet kid. Look at you now. The stuff of nightmares. I don’t want my world populated by monsters.
Ganger Jen: You can’t stop the factory from melting down, boss. I’ll take revenge on humanity with or without you.
The Doctor Ganger: It doesn’t have to be about revenge. It can be so much better than that.

The Doctor: There’s nothing we can do. The acid’s reached his heart.
Ganger Jim: Hang in there, mate.
Jim: I’m quite handsome from this angle.
Ganger Jim: I’m sorry. I’m the fake. I don’t deserve to be his real dad.
Jim: Shut up.
Ganger Jim: What do you want me to do? Anything. Just say it.
Jim: The way things are mate, it’s up to you now. Be a dad. You remember how.
The Doctor: Jimmy Weeks. You’re a dad.

The Doctor Ganger: Here she comes. {The TARDIS drops through the ceiling}
The Doctor: Oh! She does like to make an entrance.

Amy: I never thought it possible.
The Doctor Ganger: What?
Amy: You’re twice the man I thought you were.

The Doctor Ganger: Push, Amy. But only when she tells you to.

The Doctor: The energy from the TARDIS will stabilize the ‘gangers for good. They’re people now.
Cleaves: And what happens to me? Um. I still have this.
The Doctor: Aha! That’s not a problem. I have something for that. It’s ah, small and red… and it tastes like burnt onions. Ha! But it’ll get rid of your blood clot. {he pulls out a red balloon} Happy endings.

Cleaves: You really want us to do this?
The Doctor: Your company is telling the world that the situation is over. But you need to get in there and tell them that the situation has only just begun. Make them understand what they’re doing to the Flesh. Make them stop. Dicken, remember, people are good. In their bones, truly good. Don’t hate them, will you?
Ganger Dicken: How can I hate them? I’m one of them now.
The Doctor: Yeah. And just remember, people died. Don’t let that be in vain. Make what you say in that room count.
Cleaves: Ready? Side by side.
Ganger Dicken: You got it, boss.

Amy: You okay?
The Doctor: I said, breathe, Pond. Remember? Well. Breathe.
Amy: Why?
The Doctor: Breathe. {she has a stomach cramp}
Rory: What’s wrong with her?
The Doctor: Get her into the TARDIS.

Rory: Doctor, what is happening to her?
The Doctor: Contractions.
Rory: Contractions?
The Doctor: She’s going into labor.
Amy: What did he say? No, no no. Of course he didn’t. Rory, um, I don’t like this.
Rory: You’re going to have to start explaining some of this to me, Doctor.
The Doctor: What, the birds and the bees? She’s having a baby. I needed to see the Flesh in its early days. That’s why I scanned it, that’s why we were there in the first place. I was going to drop you off for fish and chips first. But things happened and there was stuff and shenanigans. {to himself} Beautiful word. Shenanigans.

The Doctor: I needed enough information to block the signal to the Flesh.
Amy: What signal?
The Doctor: The signal to you.
Amy: Doctor?
The Doctor: Stand away from her, Rory.
Rory: Why? No and why?
The Doctor: Given what we’ve learned I’ll be as humane as I can but I need to do this and you need to stand away! {Rory reluctantly stands back}

Amy: Doctor I am frightened. I’m properly, properly scared.
The Doctor: Don’t be, hold on. We’re coming for you, I swear that whatever happens, however hard, however far, we will find you.
Amy: I’m right here.
The Doctor: No you’re not. You haven’t been here for a long long time.
Amy: Oh no. {he melts her}.