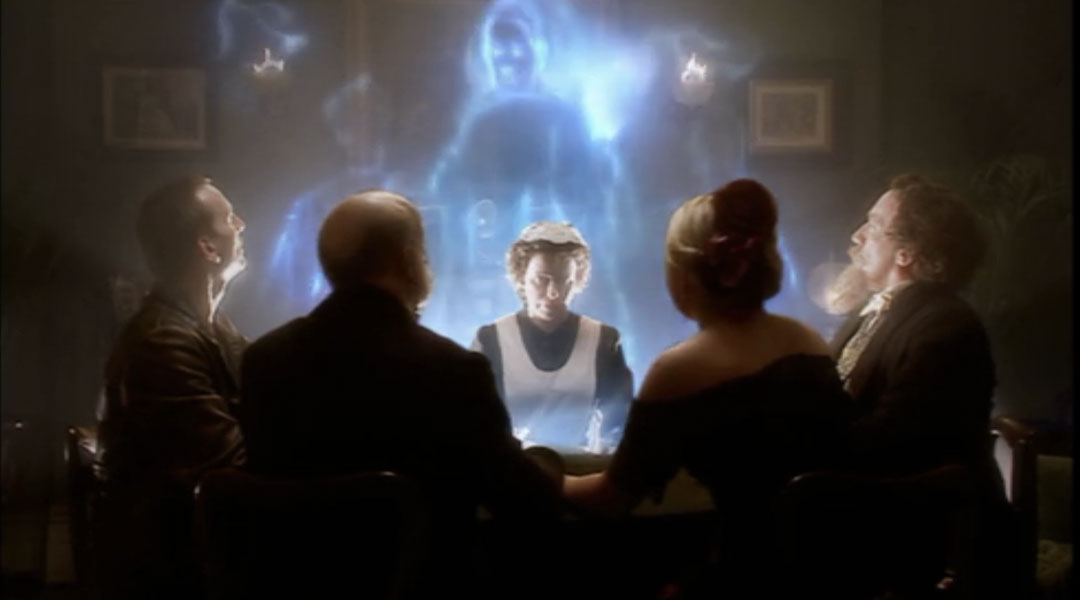 The Doctor: Where do you think you’re going?
Rose: 1860.
The Doctor: Go out there, dressed like that, you’ll start a riot, Barbarella. pointing There’s a wardrobe through there. First left, second right, third on the left, go straight ahead, under the stairs, past the bins, fifth door on your left. Hurry up!

Charles Dickens (Simon Callow): On and on I go. Same old show. I’m like a ghost, condemned to repeat myself for all eternity.
Stage Manager (Wayne Cater): It’s never too late, sir. You could always think up some new turns.
Charles Dickens: No I can’t. Even my imagination grows stale. I am an old man. Perhaps I’ve thought everything I’ll ever think.

The Doctor: Ready for this? Here we go. History!

The Doctor hearing screams from the Lodge: That’s more like it!

The Doctor: Did it say anything? Can it speak? I’m the Doctor, by the way.
Charles Dickens: Doctor? You look more like a navvy.
The Doctor: What’s wrong with this jumper?

Coachman (Meic Povey): You can’t do that, sir!
The Doctor: Why not?
Dickens: I’ll tell you why not. I’ll give you a very good reason why not! ‘Cause this is my coach!
The Doctor: Well get in then.

The Doctor: You’re a genius!
Coachman: You want me to get rid of him, sir?
Dickens: Ah, no. I think he can stay.
The Doctor: Honestly, Charles—can I call you Charles?—I’m such a big fan.
Dickens: What? A big what?
The Doctor: Fan. Number one fan, that’s me.
Dickens: How exactly are you a fan? In what way do you resemble a means of keeping oneself cool?

The Doctor: No, it means “fanatic”, “devoted to”. Mind you, I’ve gotta say, that American bit in Martin Chuzzlewit, what’s that about? Was that just padding or what? I mean it’s rubbish, that bit.
Dickens: I thought you said you were my fan.
The Doctor: Oh well, if you can’t take criticism.

Dickens: Must be we’re under some mesmeric influence.
The Doctor: No we’re not. The dead are walking. {to Rose.} Hi.
Rose: Hi. Who’s your friend?
The Doctor: Charles Dickens.
Rose: Okay.

Dickens: Can it be that I have the world entirely wrong?
The Doctor: Not wrong. There’s just more to learn.

Gwyneth (Eve Myles): I swear it is the strangest thing, Miss. You’ve got the clothes and the breeding but you talk like some sort of wild thing.
Rose: Maybe I am. Maybe that’s a good thing. You need a bit more in your life than Mr. Sneed.

Gwyneth: I’ve bet you’ve got dozens of servants, Miss.
Rose: No. No servants where I’m from.
Gwyneth: And you’ve come such a long way.
Rose: What makes you think so?
Gwyneth: You’re from London. I’ve seen London in drawings but never like that. All those people rushing about, half-naked for shame. And the noise. And the metal boxes racing past. And the birds in the sky—no, they’re metal as well. Metal birds with people in them. People are flying. And you—you’ve flown so far. Further than anyone. The things you’ve seen. The darkness, the big bad wolf.

The Doctor about Gwyneth: Now don’t antagonize her. I love a happy Medium.
Rose: I can’t believe you just said that.

The Gelth (Zoe Thorne): Once we had physical form like you, but then the war came.
Dickens: War? What war?
The Gelth: The Time War. The whole universe convulsed. The Time War raged, invisible to smaller species, but devastating to higher forms.

The Doctor: Mr. Sneed, what’s the weakest part of this house? The place where most of the ghosts have been seen?
Mr. Sneed: That would be… the morgue.
Rose: No chance you were going to say “gazebo,” is there?

The Doctor about Mr. Sneed: I think he’s gone a little bit wrong.

Rose: But I can’t die. Tell me I can’t. I haven’t even been born yet. It’s impossible for me to die. Isn’t it?
The Doctor: I’m sorry.
Rose: It’s 1869. How can I die now?
The Doctor: Time isn’t a straight line. It can twist into any shape. You could be born in the 20th century and die in the 19th and it’s all my fault. I brought you here.
Rose: It’s not your fault. I wanted to come.
The Doctor: What about me? I saw the fall of Troy. World War V. I pushed boxes at the Boston Tea Party. Now I’m going to die in a dungeon. In Cardiff.

The Doctor: Remember that world you saw—Rose’s world, all those people. None of it will exist unless you send them back through the Rift.
Gwyneth: I can’t send them back. But I can hold them. Hold them in this place— hold them here. Get out.
Rose: You can’t!
Gwyneth: Leave this place.
The Doctor: Rose, get out. Go now. I won’t leave her while she’s still in danger. Now go. to Gwyneth: Leave that to me. realizes she’s gone. I’m sorry. Thank you.

Rose: She didn’t make it.
The Doctor: I’m sorry. She closed the Rift.
Dickens: At such a cost. The poor child.
The Doctor: I did try, Rose. But Gwyneth was already dead. She had been for at least five minutes.
Rose: What d’you mean?
The Doctor: I think she was dead from the minute she stood in that arch.
Rose: But she can’t have. She spoke to us. She helped us. She saved us. How could she have done that?
Dickens: There are more things in Heaven and Earth than are dreamt of in your philosophy. Even for you, Doctor.