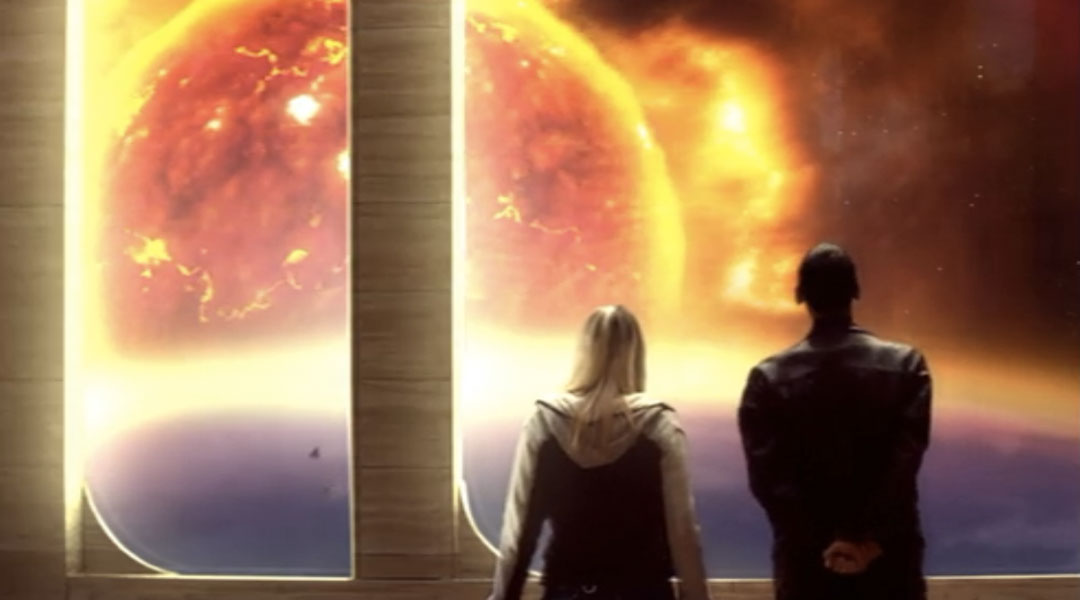 The Doctor: Ten thousand years in the future. Step outside, it’s the year 12,005. The New Roman Empire.
Rose: You think you’re so impressive.
The Doctor slightly offended: I am so impressive.

The Doctor: You lot. You spend all your time thinking about dying. Like you’re going to get killed by eggs or beef or global warming or asteroids. But you never take the time to imagine the impossible. That maybe you survive. This is the year 5.5 slash Apple slash 26. Five billion years in your future. And this is the day— hold on. This is the day the sun expands. Welcome to the end of the world.

Overhead: Guests are reminded that Platform One forbids the use of weapons, teleportation and religion.

The Steward (Simon Paisley Day): Who the hell are you?
The Doctor: Oh that’s nice, thanks.

The Doctor about the invite: The paper’s slightly psychic. Show them whatever I want them to see. Saves a lot of time.
Rose about the steward: He’s blue.
The Doctor: Yeah.
Rose: Okay.

Jabe (Yasmin Bannerman): The gift of peace. I bring you a cutting of my grandfather.
The Doctor: Thank you. Yes, gifts. I give you, in return, air from my lungs. blows on her.
Jabe: How… intimate.
The Doctor: There’s more where that came from.
Jabe: I bet there is.

The Lady Cassandra (Zoë Wanamaker): Behold. I bring gifts! From Earth itself, the last remaining ostrich egg. Legend says it had a wingspan of fifty feet and blew fire from its nostrils. Or was that my third husband… And here, another rarity. brings in a jukebox. According to the archives, this was called an iPod. It stores classical music from humanity’s greatest composers. Play on! {the jukebox plays Tainted Love}

Raffalo (Beccy Armory): Where are you from, Miss? If you don’t mind me asking.
Rose: No, not at all. Gosh, I don’t know. A long way away. I just sort of hitched a lift with this man. I didn’t even think about it. I don’t even know who he is. He’s a complete stranger.

The Doctor: What d’you think then?
Rose: Great! Yeah, fine. Once you get past the slightly psychic paper. They’re just so alien. The aliens are so alien. You look at them, and they’re alien.
The Doctor: Good thing I didn’t take you to the Deep South.

Rose: Alright. As my mate Shareen says, “Don’t argue with the designated driver.” {pulling out her cell} Can’t exactly call for a taxi. There’s no signal. We’re out of range. Just a bit.
The Doctor: Tell you what, with a little bit of jiggery-pokery—
Rose: Is that a technical term, “jiggery-pokery”?
The Doctor: Yeah. I came first in jiggery-pokery. What about you?
Rose: No. I failed hullabaloo.

Guest: Indubitably, This is the Bad Wolf Scenario.

The Doctor: That wasn’t a gravity pocket. I know gravity pockets and they don’t feel like that. What d’you think, Jabe? Listen to the engines, they’ve pitched up about 30 hertz. That budge you or what?
Jabe: It’s the sound of metal. It doesn’t make any sense to me.
The Doctor: Where’s the engine room?
Jabe: I don’t know. But the maintenance duct is just behind our guest suite. I could show you. And your… wife.
The Doctor: She’s not my wife.
Jabe: Partner?
The Doctor: Nope.
Jabe: Concubine.
The Doctor: No.
Jabe: Prostitute?
Rose: What ever I am it must be invisible. D’you mind? Tell you what, you two go pollinate. I’m going to catch up with the family. Quick word with Michael Jackson.
The Doctor: Don’t start a fight.

Jabe: This facility is purely automatic. It’s the height of the Alpha Class. Nothing can go wrong.
The Doctor: Unsinkable?
Jabe: If you like. The nautical metaphor is appropriate.
The Doctor: You’re telling me. I was on board another ship once they said that was unsinkable. I ended up clinging to an iceberg. It wasn’t half cold. He stops. So, what you’re saying is, if we get in trouble there’s no one to help us out?
Jabe: I’m afraid not.
The Doctor: Fantastic!
Jabe: I don’t understand. In what way is that fantastic?

Cassandra: They say mankind has touched every star in the sky.
Rose: So you’re not the last human?
Cassandra: I am the last pure human. The others mingled. Oh, they call themselves new humans and proto-humans and digi-humans—even human-ish. But you know what I call them? Mongrels.
Rose: Right. And you stayed behind.
Cassandra: I kept myself pure.
Rose: How many operations have you had?
Cassandra: Seven hundred and eight. Next week it’s 709. I’m having my blood bleached. Is that why you wanted a word? You could be flatter. You’ve got a little bit of a chin poking out.
Rose: I’d rather die.
Cassandra: Honestly, it doesn’t hurt.
Rose: I mean it, I would rather die. It’s better to die than live like you—a bitchy trampoline.
Cassandra: Oh well. What do you know.
Rose: I was born on that planet. And so was my mum and so was my dad. And that makes me officially the last human being in this room. ‘Cause you’re not human. You’ve had it all nipped and tucked and flattened ’til there’s nothing left. Anything human got chucked in the bin. You’re just skin, Cassandra. Lipstick and skin.

The Doctor: So tell me, Jabe, what’s a tree like you doing in a place like this?

Jabe: And what about your ancestry, Doctor? Perhaps you could tell a story or two. Perhaps a man only enjoys trouble when there’s nothing else left. I scanned you earlier. The metal machine had trouble identifying your species. It refused to admit your existence. And even when it named you I wouldn’t believe it. But it was right. I know where you’re from. Forgive me for intruding, but it’s remarkable you even exist. I want to say how sorry I am.

The Doctor: Is anyone in there?
Rose: Let me out!
The Doctor: Oh, well it would be you.
Rose: Open the door!
The Doctor: Hold on, give us two ticks.

The Doctor: The whole thing’s jammed. I can’t open the door. Stay there! Don’t move.
Rose: Where am I going to go, Ipswich?

Cassandra: The Adherents of the Repeating Meme. J’accuse!
The Doctor: That’s all very well and really kind of obvious. But if you stop and think about it, a repeated meme is just an idea. And that’s all they are: an idea. Remote-controlled droids. Nice little cover for the real troublemaker. Go on, Jimbo.
Cassandra: I bet you were the school swot who never got kissed. Atoms!
The Doctor: What are you going to do, moisturize me?
Cassandra: With acid.

The Doctor: You can’t! The heat’s going to vent through this place.
Jabe: I know.
The Doctor: Jabe, you’re made of wood.
Jabe: Then stop wasting time, Time Lord.

Rose: You alright?
The Doctor: Yeah, I’m fine. I’m full of ideas—I’m bristling with ’em. Idea number one: teleportation through five thousand degrees needs some kind of feed. Idea number two: this feed must be hidden nearby. Idea number three: if you’re as clever as me, then a teleportation feed can be reversed.

The Doctor: People have died, Cassandra. You murdered them.
Cassandra: It depends on your definition of people. And that’s enough of a technicality to keep your lawyers dizzy for centuries.

Rose: Help her.
The Doctor: Everything has its time and everything dies.

Rose: The end of the Earth. It’s gone. We were too busy saving ourselves, no one saw it go. All those years. All that history and no one was even looking. It’s just…
The Doctor: Come with me.

The Doctor: You think it’ll last forever. People and cars and concrete. But it won’t. One day it’s all gone. Even the sky. My planet’s gone. It’s dead. It burned like the Earth. It’s just rocks and dust. Before its time.
Rose: What happened?
The Doctor: There was a war and we lost.
Rose: A war with who? What about your people?
The Doctor: I’m a Time Lord. I’m the last of the Time Lords. They’re all gone. I’m the only survivor. I’m left traveling on my own because there’s no one else.
Rose: There’s me.
The Doctor: You’ve seen how dangerous it is. Do you want to go home?
Rose: I don’t know. I want… Can you smell chips?
The Doctor: Yeah.
Rose: I want chips.
The Doctor: Me too.
Rose: Right then, before you get me back in that box, chips it is, and you can pay.
The Doctor: No money.
Rose: What sort of date are you? Come on then, tightwad. Chips are on me. We’ve only got five billion years ’til the shops close.