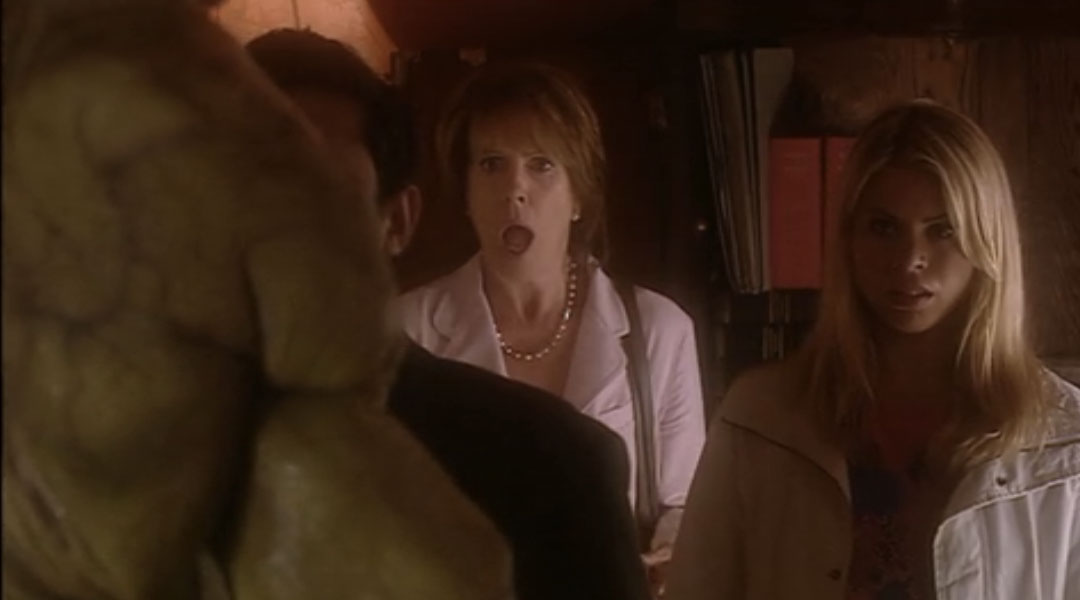 Jackie (Camille Coduri) about Rose: How old are you? Forty, forty-five? What, did you find her on the internet? Go online and pretend you’re a doctor?
The Doctor: I am a doctor.
Jackie: Prove it. Stitch this, mate! {smacks him}

Rose: I can’t tell her. I can’t even begin. She’s never going to forgive me. And I missed a year. Was it good?
The Doctor: Middling.

The Doctor: Well if it’s this much trouble are you going to stay here now?
Rose: I don’t know. I can’t do that to her again though.
The Doctor: Well she’s not coming with us.
Rose: No joke.
The Doctor: I don’t do families.
Rose: She slapped you.
The Doctor: Nine hundred years of time and space and I’ve never been slapped by someone’s mother.

Rose: Every conversation with you just goes mental. There’s no one else I can talk to. I’ve seen all that stuff up there. The size of it. And I can’t say a word. Aliens and spaceships and things. And I’m the only person on planet Earth who knows they exist. {A spaceship screams by overhead.} Oh, that’s not fair.

Harriet Jones (Penelope Wilton): Excuse me. Harriet Jones. MP for Flydale North.
Indra Ganesh (Navin Chowdhry): I’m sorry, can’t it wait?
Harriet Jones: But I did have an appointment at 3:15.
Indra Ganesh: Yes. And then a spaceship crashed in the middle of London. I think the schedule might have changed.

The Doctor: I’m off for a wander, that’s all.
Rose: Right. There’s a spaceship in the Thames and you’re just wandering.
The Doctor: Nothing to do with me. It’s not an invasion. That was a genuine crash landing.

Rose: Promise you won’t disappear?
The Doctor: Tell you what, TARDIS key. ‘Bout time you had one.

Dr. Toshiko Sato (Naoko Mori): I just assumed that’s what aliens looked like. But you’re saying it’s just an ordinary pig from Earth?
The Doctor: More like a mermaid. Victorian showmen used to draw the crowds by taking the skull of a cat, gluing it to a fish and calling it a mermaid.

Dr. Toshiko Sato: But the technology augmenting its brain—it’s like nothing on Earth. It’s alien. Aliens are faking aliens. Why would they do that?

Neighbor: Someone owes Mickey an apology.
Rose: I’m sorry.
Neighbor: Not you.
Jackie: Well it’s not my fault. Be fair. What was I supposed to think?

Rose: My mum’s here.
The Doctor: Oh that’s just what I need. Don’t you dare go and make this place domestic.
Mickey: You ruined my life, Doctor. They thought she was dead. I was a murder suspect because of you.
The Doctor: See what I mean? Domestic!

Rose: That was a real spaceship.
The Doctor: Yep.
Rose: So it was all a pack of lies. What is it?
Are they invading?
Mickey: Funny way to invade, putting the world on red alert.
The Doctor: Good point! So. What are they up to?

Rose: So. Um. In twelve months. Have you been seeing anybody else?
Mickey: No.
Rose: Okay—
Mickey: Mainly because everyone thinks I murdered you.

The Doctor: If aliens fake an alien crash, an alien pilot, what do they get? {pause.} Us. They get us. It’s not a diversion, it’s a trap.

The Doctor: Excuse me, would you mind not farting while I’m saving the world?