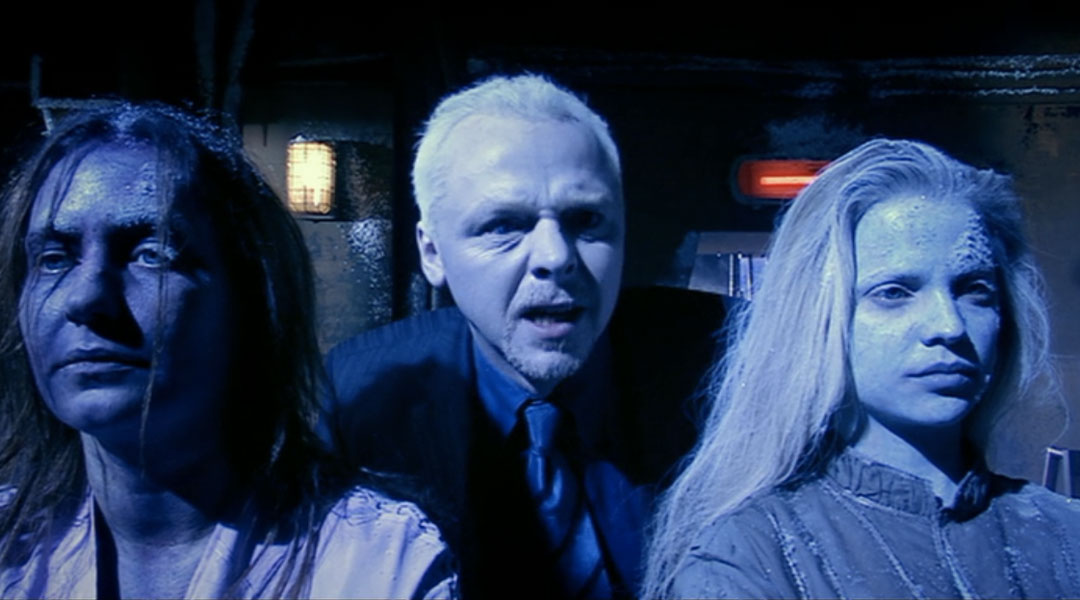 The Doctor: The Fourth Great and Bountiful Human Empire. And there it is. Planet Earth. At its height. Covered with mega-cities. Five moons. Population: 96 billion. The hub of a galactic domain. Stretching across a million planets, a million species. With mankind right in the middle. {Adam faints} He’s your boyfriend.
Rose: Not anymore.

The Doctor: Um, this is going to sound daft, but can you tell me where I am?
Cathica (Christine Adams): Floor 139. Could they write it any bigger?
The Doctor: Floor 139 of what?
Cathica: Must have been a hell of a party.
Suki (Anna Maxwell-Martin): You’re on Satellite Five.
The Doctor: What’s Satellite Five?
Cathica: Come on. How could you get on board without knowing where you are?
The Doctor: Look at me. I’m stupid.

Cathica: Doctor, I think if there was any sort of conspiracy, Satellite Five would have seen it. We see everything.
The Doctor: I can see better. This society’s the wrong shape. Even the technology.
Cathica: It’s cutting edge.
The Doctor: It’s backwards. There’s a great big door in your head.

The Doctor: Rose is asking the right sort of questions: Why is it so hot?
Cathica: One minute you’re worried about the Empire and the next minute it’s the central heating.
The Doctor: Oh, never underestimate plumbing. Plumbing’s very important.

Cathica: How come it’s giving you the code?
The Doctor: Someone up there likes me.
The Editor (observing from Floor 500) laughs

Adam: Oh my god. I’m gonna be sick. {he throws up and gets a funny look}
Nurse (Tamsin Greig): Special offer. We installed the vomit-o-matic at the same time. Nano-termites have been placed in the lining of your throat. In the event of sickness, they freeze the waste.

The Editor (Simon Pegg): Create a climate of fear and it’s easy to keep the borders closed. It’s just a matter of emphasis. The right word in the right broadcast repeated often enough can destabilize an economy, invent an enemy, change a vote.
Rose: So all the people on Earth are like, slaves.
The Editor: Well, now. There’s an interesting point. Is a slave a slave if he doesn’t know he’s enslaved?
The Doctor: Yes.
The Editor: Oh. I was hoping for a philosophical debate. Is that all I’m going to get? “Yes”?
The Doctor: Yes.
The Editor: You’re no fun.
The Doctor: Let me out of these manacles. You’ll find out how much fun I am.

The Doctor to Rose: You and your boyfriends!

The Editor to Suki: Burn her mind.
Cathica sensing it: Oh no you don’t! You should’ve promoted me years back!

The Doctor: Oy mate. You wanna bank on a certainty? Massive heat and massive body: massive bad. See you in the headlines!