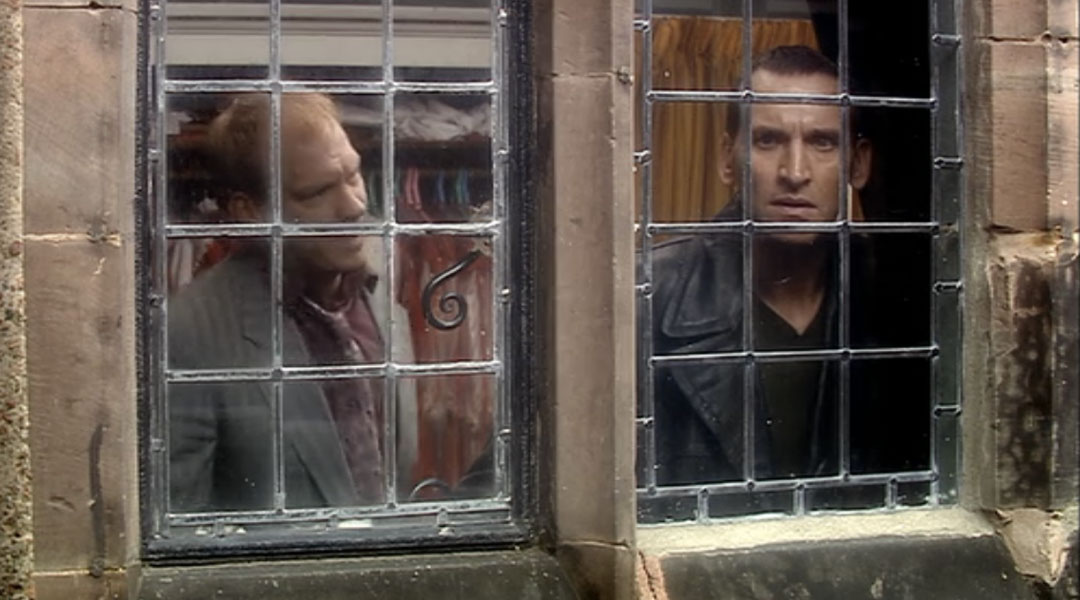 Rose: It’s so weird. The day my father died. I thought it’d be all sort of grim and stormy. It’s just another day.
The Doctor: The past is another country. 1987’s just the Isle of Wight.

The Doctor: When we met, I said “Travel with me in space.” You said no. Then I said “Time machine”.
Rose: It wasn’t some big plan. I just saw it happening and I thought, I can stop it.
The Doctor: I did it again, I picked another stupid ape. I should have known. It’s not about showing you the universe. It never is. It’s about the universe doing something for you.

Pete Tyler (Shaun Dingwall): Listen, don’t worry about him. Couples have rows all the time.
Rose: We’re not a couple. Why does everyone think we’re a couple?… I think he left me.
Pete: What, a pretty girl like you? If I was going out with you—
Rose: Stop! Right there.
Pete: I’m just saying—
Rose: I know what you’re saying and we’re not going there. At no point are we going anywhere near there. You aren’t even aware that “there” exists. I don’t even want to think about “there” and believe me, neither do you. There—for you—is like…. It’s like the Bermuda Triangle.
Pete: Blimey, you know how to flatter a bloke.

The Doctor: I’ve waited a long time to say this. Jackie Tyler, do as I say. Go and check the doors.
Jackie: Yes, sir.
The Doctor: I should have done that ages ago.

The Doctor: Time’s been damaged and they’ve come to sterilize the wound. By consuming everything inside.
Rose: Is this because… Is this my fault?

Pete: This mate of yours, what did you mean, this is your fault?
Rose: I don’t know. Just… everything.
Pete: I gave you my car keys. You don’t give your keys to a complete stranger. It’s like I trusted you. The moment I met ya, I just did. A wound in time. You called me “Dad”. I can see it. My eyes. Jackie’s attitude. You sound like her when you shout. You are. You are. You’re my Rose.

Pete: So if this mate of yours isn’t your boyfriend then I have to say I’m glad, because being your dad I’m allowed to say he’s a bit old for you.

Rose: Where I come from, Jackie doesn’t know how to work the timer on the video recorder.
Pete: I showed her that last week. *beat* Point taken.

The Doctor to Baby Rose: Now Rose, you’re not going to bring about the end of the world. Are you?

Pete: I never read you those bedtime stories. I never took you on those picnics. I was never there for you.
Rose: You would have been.
Pete: But I can do this for you. I can be a proper dad now.
Rose: But it’s not fair.
Pete: I’ve had all these extra hours. No one in the world’s ever had that. And on top of that, I get to see you. And you’re beautiful. How lucky am I, eh?

Jackie: The driver was just a kid. He stopped. He waited for the police. It wasn’t his fault. For some reason, Pete just ran out. People say there was this girl. And she sat with Pete while he was dying. And she held his hand. And then she was gone. We never found out who she was.

Rose: Peter Alan Tyler. My dad. The most wonderful man in the world. Died the 7th of November, 1987.