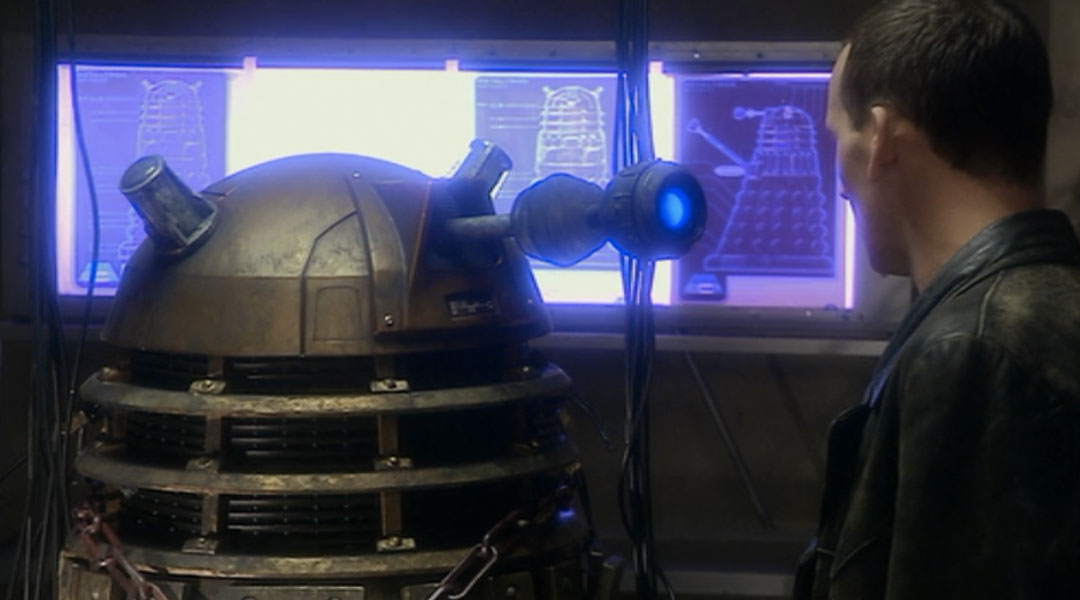 The Doctor: The stuff of nightmares, reduced to an exhibit. I’m getting old.

Rose: If someone’s collecting aliens that makes you exhibit A.

Aide: On behalf of all of us, I want to wish you a very happy birthday, sir. And the president called to convey his personal best wishes.
Henry Van Statten (Corey Johnson): The president is ten points down. I want him replaced.
Aide: I don’t think that’s very wise, sir.
Henry Van Statten: Thank you so much for your opinion. You’re fired. Get rid of him. Wipe his memory. Put him on the road someplace. Memphis. Minneapolis. Somewhere beginning with M. {new aide steps in} So, the next president, what do you think? Republican or Democrat?
Diana Goddard (Anna-Louise Plowman): Democrat, sir.
Van Statten: For what reason?
Goddard: They’re just so funny, sir?

The Doctor: The metal’s just battle armor. The real Dalek creature’s inside.
Statten: What does it look like?
The Doctor: A nightmare. A mutation. The Dalek race was genetically engineered. Every single emotion was removed except hate.
Statten: Genetically engineered. By whom?
The Doctor: By a genius, Van Statten. By a man who was king of his own little world. You’d like him.
Goddard: It’s been on Earth for over 50 years. Sold at private auction, moving from one collection to another. Why would it be a threat now?
The Doctor: Because I’m here. How did it get to Earth? Does anyone know?
Goddard: Records say it came from the sky like a meteorite. It fell to Earth on the Ascension Islands, burnt in its crater for three days until anyone could get near it, and all that time it was screaming. Must have gone insane.
The Doctor: It must have fallen through time. The only survivor.
Goddard: You talked about a war?
The Doctor: The Time War. The final battle between my people and the Dalek race.
Statten: But you survived too.
The Doctor: Not by choice.
Statten: This means the Dalek isn’t the only alien on Earth, Doctor, there’s you. The only one of your kind in existence.

Statten: Oh the advances I’ve made from alien junk. You have no idea, Doctor. Broadband? Roswell. Just last year, my scientists cultivated bacteria from the Russian crater and do you know what we found? The cure for the common cold. Kept it strictly within the laboratory, of course. No need to get people excited. Why sell one cure when I can sell a thousand palliatives.

The Doctor: Let me tell you something, Van Statten. Mankind goes into space to explore, to be part of something greater.
Van Statten: Exactly! I wanted to touch the stars.
The Doctor: You just want to drag the stars down, stick them underground, underneath tons of sand and dirt, and label them. You’re about as far from the stars as you can get.

Rose: You’re out. You made it. I never thought I’d feel the sunlight again.
Dalek: How does it feel?

Dalek: Rose, give me orders. Order me to die.
Rose: I can’t do that.
Dalek: This is not life. This is sickness. I shall not be like you. Order my destruction! Obey! Obey! Obey!
Rose: Do it.
Dalek: Are you frightened, Rose Tyler?
Rose: Yeah.
Dalek: So am I. Exterminate.

Van Statten: What the hell are you doing?
Goddard: Two hundred personnel dead and all because of you, sir. Take him away, wipe his memory and leave him by the road someplace.
Van Statten: You can’t do this to me! I am Henry Van Statten!
Goddard: And by tonight Henry Van Statten will be a homeless, brainless junkie living on the streets of San Diego, Seattle, Sacramento. Someplace beginning with S.

Rose: Adam was saying that all his life he’s wanted to see the stars.
The Doctor: Tell him to go and stand outside then.