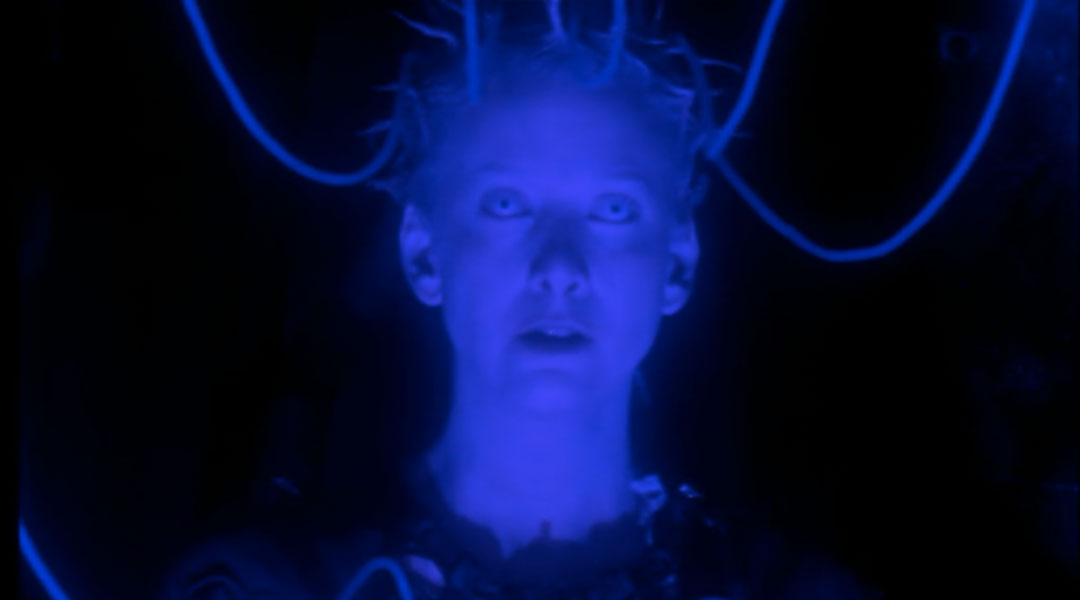 Finding himself in the Big Brother house:
Overhead Voice: Would the Doctor please come to the Diary Room. {He does.} You are live on Channel 44,000. Please do not swear.
The Doctor: You have got to be kidding.

Rose: Hold on. I must be going mad. It can’t be. This looks like a—
Floor Manager (Jenna Russell): Android activated!
Rose: Oh my god, the Android. The Anne-droid.
Anne-droid (Anne Robinson): Welcome. To the Weakest Link.

Finding himself on What Not to Wear:
Trine-e (Trinny Woodall): We’re going to have to find you some new colors. Maybe get rid of that Oklahoma-farmboy thing you’ve got going on.
Zu-zana (Susannah Constantine): Just stand still and let the Defabricator work its magic.
Jack: What’s the Defabricator? {his clothes disappear} Okay. Defabricator. Does exactly what it says on the tin. Am I naked in front of millions of viewers?
Both: Absolutely!
Jack: Ladies, your viewing figures just went up.

The Doctor: Ah, Lynda with a Y. Sweet little Lynda. It’s worse than that. I’m not just some passing traveller. No stupid little transmat gets inside my ship. That beam was fifteen million times more powerful which means… this isn’t just a game. There’s something else going on. {he addresses the cameras} Well, here’s the latest update from the Big Brother house. I’m getting out, I’m going to find my friends. And then I’m going to find you.

Trine-e: It’s the buccaneer-look. A little dash of pirate and just a tweak of President Schwarzenegger.

Anne-droid: So Rose, what work do you do?
Rose: I just travel about a bit. Bit of a tourist, I suppose.
Anne-droid: Another way of saying unemployed.
Rose: No.
Anne-droid: Have you got a job.
Rose: Well not really, no.
Anne-droid: Then you are unemployed and yet you still have enough money to buy peroxide.

Lynda (Jo Joyner): There are 60 Big Brother houses, all running at once.
The Doctor: How many, 60?
Strood (Jamie Bradley): They’ve had to cut back. It’s not what it was.
The Doctor: It’s a charnel house! What about the winners? What do they get?
Lynda: They get to live.
The Doctor: Is that it?
Lynda: Well isn’t that enough?

Rodrick: When it comes to the final, I want to be up against you. So you get disintegrated and I get a stackload of credits, courtesy of the Bad Wolf Corporation.
Rose: What d’you mean? Who’s Bad Wolf?
Rodrick: They’re in charge. They run the gaming station.
Rose: Why are they called Bad Wolf?
Rodrick: I don’t know, they just are, yeah? It’s like an Old Earth nursery rhyme or something. What does it matter?
Rose: We keep hearing those words everywhere we go. “Bad Wolf”.

The Doctor: Lynda, you’re sweet. From what I’ve seen of your world, do you think anybody votes for sweet?

The Doctor: Hold on. I’ve been here before. This is Satellite 5.

Lynda: You were here a hundred years ago?
The Doctor: Yep.
Lynda: You’re looking good on it.
The Doctor: I moisturize.

The Doctor: And you watch this stuff?
Lynda: Everyone does. How come you don’t?
The Doctor: Never paid for my license.
Lynda: Oh my god, you get executed for that!

Jack: Well ladies, the pleasure was all mine. Which is the only thing that matters in the end.

The Doctor: The human race, brainless sheep being fed on a diet of— mind you, have you still got that program where three people have to live with a bear?

Anne-droid: Rose, the oldest inhabitant of the Isop Galaxy is the Face of what?
Rose: Boe! The Face of Boe!

The Doctor: This place should be a base of broadcasting. But the systems are twice as complicated. It’s more than just television. This station’s transmitting something else.
Captain Jack: Like what?
The Doctor: I don’t know. This whole Bad Wolf thing’s tied up with me. Someone’s manipulating my entire life.

Captain Jack: Don’t you touch him! Leave him alone! You killed her! Your stupid friggin’ game show killed her!

The Doctor to Captain Jack: Let’s do it.

The Doctor: Who’s in charge of this place? This satellite’s more than a game station. Who killed Rose Tyler? I want an answer!
Davitch Pavale (Jo Stone-Fewings): She can’t reply. {The Doctor turns to him.} Don’t shoot!
The Doctor: Oh, don’t be so fey. Like I was ever going to shoot. {throws him the gun.} Captain, we’ve got more guards on the way up. Secure the exits.
Captain Jack: Yes, sir.
The Doctor: You, what were you saying?
Davitch Pavale: But… I’ve got your gun.
The Doctor: Okay, so shoot me. Why can’t she answer?
Davitch Pavale: She’s, um… can I put this down?
The Doctor: If you want. Just hurry up.

Female Programmer (Nisha Nayar): You’re not allowed in there. Archive Six is out-of-bounds.
Captain Jack brandishing his guns: Do I look like an out-of-bounds sort of guy?

Lackey: If you’re not holding us hostage then open the door and let us out. The staff are terrified!
The Doctor: That’s the same staff who execute hundreds of contestants every day.
Lackey: That’s not our fault. We’re just doing our jobs.
The Doctor: And with that sentence you just lost the right to even talk to me. Now back off!

Captain Jack: Everybody watching? Okay, 3-2-1.
The Doctor: But you killed her.
Captain Jack: Oh, do you think?
Lynda: What the hell was that?
Captain Jack: It’s a transmat beam. Not a disintegrator, a secondary transmat system. People don’t get killed in the games. They get transported across space. Doctor, Rose is still alive.

The controller (Martha Cope): Oh my masters, you can kill me. For I have brought your destruction.

The Doctor: Someone’s been playing a long game. Controlling the human race from behind the scenes for generations.

The Doctor: There’s something sitting right on top of planet Earth, but it’s completely invisible. If I cancel the signal—… The Dalek ships appear
Captain Jack: That’s impossible. I know those ships. They were destroyed.
The Doctor: Appears that they survived.
Lynda: Who did? Who are they?
The Doctor: Two hundred ships. More than two thousand on board each one. That’s just about half-a-million of them.
Davitch Pavale : Half-a-million what?
The Doctor: Daleks.

Dalek (Nicholas Briggs): I will talk to the Doctor.
The Doctor: Oh will you? That’s nice. Hello!
Dalek: The Dalek stratagem nears completion. The fleet is almost ready. You will not intervene.
The Doctor: Oh really? Why’s that then?
Dalek: We have your associate. You will obey or she will be exterminated.
The Doctor: No.
Dalek: Explain yourself.
The Doctor: I said “no.”
Dalek: What is the meaning of this negative?
The Doctor: It means “no.”
Dalek: But she will be destroyed!
The Doctor: No! ‘Cause this is what I’m gonna do. I’m gonna rescue her. I’m gonna save Rose Tyler from the middle of the Dalek fleet, and then I’m gonna save the Earth. And then—just to finish off—I’m gonna wipe every last stinking Dalek out of the sky!
Dalek: But you have no weapons, no defenses, no plan.
The Doctor: Yeah! And doesn’t that scare you to death. Rose?
Rose: Yes Doctor?
The Doctor: I’m coming to get you.