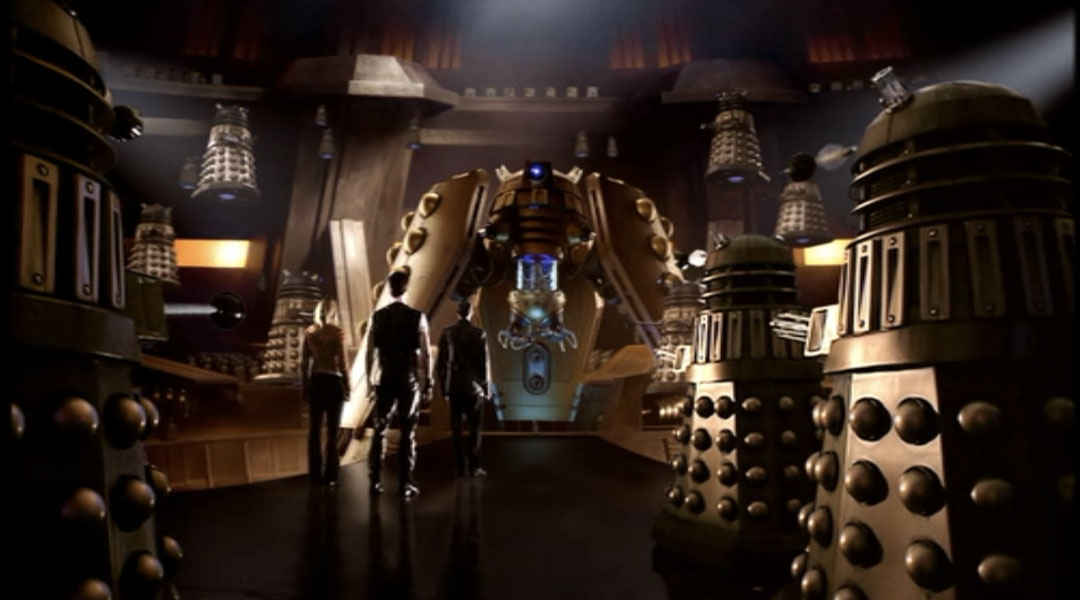 Captain Jack: One minute they’re the greatest threat in the Universe, the next minute they vanished out of time and space.
The Doctor: They went off to fight a bigger war. The Time War.
Captain Jack: I thought that was just a legend.
The Doctor: I was there. The war between the Daleks and the Time Lords. With the whole of creation at stake. My people were destroyed, but they took the Daleks with them. I almost thought it was worth it. Now it turns out they died for nothing.
Rose: There’s thousands of them now. We could hardly stop one. What are we going to do?
The Doctor: No good stood around here, chin waggin’. Human race should gossip all day. Daleks have got the answers, let’s go meet the neighbors!

The Doctor: You know what they call me in the ancient legends on the Dalek home world? “The Oncoming Storm”. You might have removed all your emotions, but I reckon right down deep in your DNA there’s one little spark left. And that’s fear. Doesn’t it just burn when you face me?

The Daleks (Nicholas Briggs): Do not interrupt! Do not interrupt!
The Doctor: I think you’re forgetting something. I’m the Doctor and if there’s one thing I can do it’s talk. I’ve got give billion languages and you haven’t got one way of stopping me. So if anybody’s gonna shut up, it’s you!

The Doctor: Since when do the Daleks have a concept of blasphemy?
The Dalek Emperor: I reached into the dark and made new life. I am the god of all Daleks.
Daleks: Worship him! Worship him!
The Doctor: They’re insane. Hiding in silence for hundreds of years, that’s enough to drive anyone mad. But it’s worse than that. Driven mad by your own flesh. The stink of humanity. You hate your own existence. And that makes them more deadly than ever.

The Doctor: The Dalek plan, big mistake. Because what have they left me with? Anyone? Anyone? Oh come on, it’s obvious! A great big transmitter. This station. If I can change the signal, fold it back, sequence it—anyone?
Captain Jack: You’ve got to be kidding.
The Doctor: Give the man a medal!
Captain Jack: A delta wave?
The Doctor: A delta wave!
Rose: What’s a delta wave?
Captain Jack: A wave of Van Cassadyne energy. It fries your brain. Stand in the way of a delta wave and your head gets barbecued.
The Doctor: And this place can transmit a massive wave. Wipe out the Daleks.
Lynda (Jo Joyner): Well get started then! Do it then!
The Doctor: Trouble is, wave that size, building this big, brain as clever as mine should take about oo… three days? How long ’til the fleet arrive?
Davitch Pavale (Jo Stone-Fewings): Twenty-two minutes.

Captain Jack: It’s been fun, but I guess this is goodbye.
Rose: Don’t talk like that. The Doctor’s gonna do it. You just, watch him.
Captain Jack: Rose, you are worth fighting for. {kisses her} Wish I’d never met you Doctor. I was much better off as a coward. {kisses him} {to both} See you in hell.

Captain Jack: If you hear fighting up above—if you hear us dying—then tell me that the Daleks aren’t real.

The Doctor: If I’m very clever—and I’m more than clever, I’m brilliant—I might just save the world. Or rip it apart.
Rose: I’ll go for the first one.
The Doctor: Me too. Now, I’ve just got to go and power up the game station. Hold on!
And with that the Doctor sends Rose back to her time

The Doctor (hologram): This is Emergency Program One. Rose, now listen. This is important. If this message is activated then it can only mean one thing: we must be in danger. And I mean fatal. I’m dead, or about to die any second with no chance of escape—
Rose: No!
The Doctor (hologram): —and that’s okay. I hope it’s a good death. But I promised to look after you and that’s what I’m doing. The TARDIS is taking you home—
Rose: I won’t let you.
The Doctor (hologram): —And I bet you’re fussing and moaning now. Typical. But hold on and just listen a bit more. The TARDIS can never return for me. Emergency Program One means I’m facing an enemy that should never get their hands on this machine. So this is what you should do: let the TARDIS die. Just let this old box gather dust. No one can open it, no one will even notice it. Let it become a strange little thing standing on a street corner. And over the years the world will move on and the box will be buried. And if you want to remember me, then you can do one thing. That’s all. One thing. The hologram turns to look at Rose. Have a good life. Do that for me, Rose. Have a fantastic life.

The Doctor to the Dalek: The whole universe is in danger if I let you live. D’you see, Jack? That’s the decision I’ve got to make for every living thing. Die as a human or live as a Dalek. What would you do?
Captain Jack: You sent her home. She’s safe. Keep working.
Dalek Emperor: But he will exterminate you!
Captain Jack: Never doubted him, never will.

The Doctor: Now you tell me, god of all Daleks, ’cause there’s one thing I never worked out. The words Bad Wolf. Spread across time and space. Everywhere. Drawing me in. How’d you manage that?
Dalek Emperor: I did nothing.
The Doctor: Oh c’mon, there’s no secrets now, your worship.
Dalek Emperor: They’re no part of my design. This is the truth of god.

Rose: I can’t give up.
Jackie: Lock the door, walk away.
Rose: Dad wouldn’t give up.
Jackie: Well he’s not here, is he? And even if he was, he’d say the same.
Rose: No he wouldn’t. He’d tell me to try anything. If I could save the Doctor’s life, try anything.
Jackie: Well we’re never going to know.
Rose: Well I know. ‘Cause I met him. I met Dad.
Jackie: Don’t be ridiculous.
Rose: The Doctor took me back in time and I met Dad.
Jackie: Don’t say that.
Rose: Remember when Dad died? There was someone with him. A girl, a blonde girl. She held his hand. You saw her from a distance, Mum. You saw her! Think about it. That was me! You saw me!
Jackie: Stop it!
Rose: That’s how good the Doctor is!
Jackie: Stop it! Just stop it!

Jackie: Right. You’ve only got this until six o’clock, so get on with it.
Rose: Mom, where in the hell’d you get that from?
Jackie: Rodrigo. He owes me a favor. Never mind why, but you were right about your dad, sweetheart. He was full of mad ideas. And this is exactly what he would have done.

Dalek: Exterminate!
Captain Jack: I kind of figured that.

Rose: I am the Bad Wolf. I create myself. I take the words, I scatter them in time and space. A message to lead myself here.
The Doctor: Rose, you’ve got to stop this! You’ve got to stop this now! You’ve got the entire vortex running through your head. You’re gonna burn.
Rose: I want you safe. My Doctor. Protected from the false god.
Dalek Emperor: You can not hurt me. I am immortal.
Rose: You are tiny. I can see the whole of time and space. Every single atom of your existence. And I divide them. Everything must come to death. All things. Everything dies. The Time War ends.

Rose: I can see everything. All that is, all that was, all that ever could be.
The Doctor: That’s what I see. All the time. And doesn’t it drive you mad?
Rose: My head—
The Doctor: Come here.
Rose: —is killing me.
The Doctor: I think you need a doctor.

The Doctor: Rose Tyler. I was going to take you to so many places. Barcelona. Not the city Barcelona, the planet Barcelona. You’d love it. Fantastic place. They’ve got dogs with no noses. Imagine how many times a day you end up telling that joke. And it’s still funny.
Rose: Then why can’t we go?
The Doctor: Maybe you will. Maybe I will. But not like this.
Rose: You’re not making sense.
The Doctor: I might never make sense again. I might have two heads. Or no head. Imagine me with no head! And don’t say that’s an improvement. But it’s a bit dodgy, this process. You never know what you’re going to end up with.

Rose: Tell me what’s going on.
The Doctor: I absorbed all the energy of the Time Vortex and no one’s meant to do that. Every cell in my body’s dying.
Rose: Can’t you do something?
The Doctor: Yeah. Doing it now. Time Lord’s have this sort of trick. It’s our little way of cheating death. Except… it means I’m gonna change. And I’m not gonna see you again. Not like this. Not with this daft old face. And before I go—
Rose: Don’t say that!
The Doctor: Rose, before I go, I just want to tell you, you were fantastic. Absolutely fantastic. And you know what? So was I.