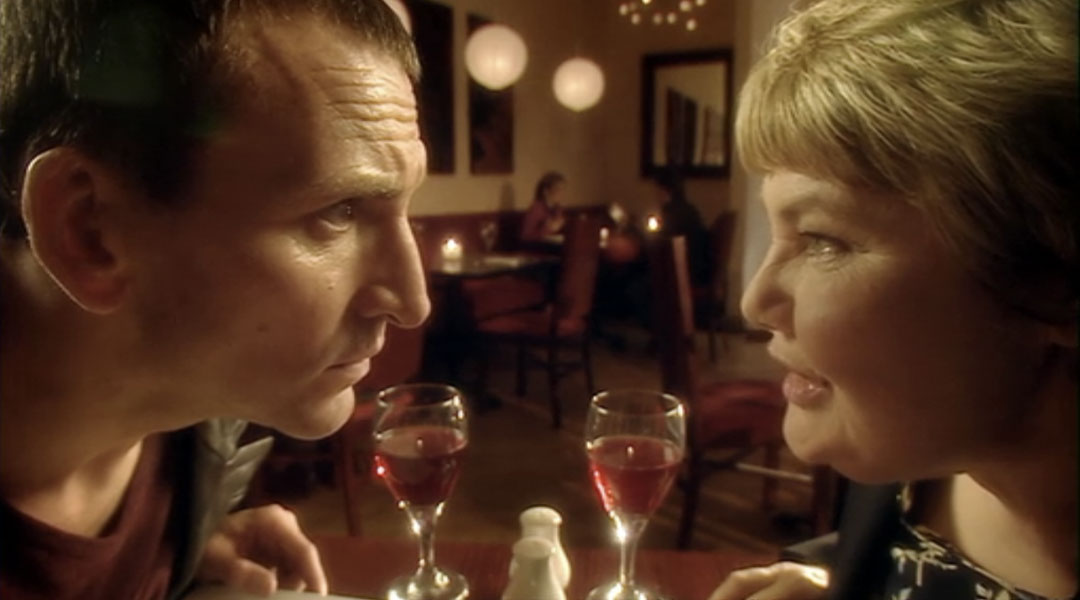 Jack about Rose and Mickey: Aw, sweet. Look at these two. How come I never get any of that?
The Doctor: Buy me a drink first.
Captain Jack: Such hard work.
The Doctor: But worth it.

Mickey: So what are you doing in Cardiff and who the hell is Jumpin’ Jack Flash? I mean I don’t mind you hanging out with big ears up there—
The Doctor: Oy!
Mickey: Look in the mirror. But this guy, I don’t know. He’s kinda—
Jack: Handsome?
Mickey: More like cheesy.
Jack: Early 21st century slang. Is cheesy good or bad?
Mickey: It’s bad.
Jack: But bad means good, isn’t that right?
The Doctor: Are you saying I’m not handsome?

Mickey: That old lady’s staring.
Jack: Probably wondering what four people could do inside a small wooden box.
Mickey: What are you captain of? The innuendo squad? {Jack gives him the universal sign for Whatever.}

Jack: See ya in hell.

Secretary: The Lord Mayor says, Thank you for popping by. She’d love to have a chat but she’s up to her eyes in paperwork. Perhaps if you could make an appointment for next week.
The Doctor: She’s climbing out the window, isn’t she?
Secretary: Yes she is.

The Doctor: How’d you think of the name?
Margaret: What, Blaidd Drwg? It’s Welsh.
The Doctor: I know. But how did you think of it?
Margaret: Chose it at random, that’s all. I don’t know. Just sounded good. Does it matter?
The Doctor: Blaidd Drwg.
Rose: What’s it mean?
The Doctor: Bad Wolf.
Rose: But I’ve heard that before, “Bad Wolf”. I’ve heard that lots of times.
The Doctor: Everywhere we go, two words, following us: “Bad Wolf”
Rose: How can they be following us?
The Doctor less than convincingly: Nah! Just a coincidence. Like hearing a word on the radio then hearing it all day. Never mind. Things to do!

Margaret: Take me home and you take me to death.
The Doctor: Not my problem.

Margaret: This ship is impossible. It’s superb. How’d you get the outside around the inside?
The Doctor: Like I’d give you the secret, yeah.
Margaret: I almost feel better about being defeated. I never stood a chance. This is the technology of the gods.
The Doctor: Don’t worship me, I’d make a very bad god. Wouldn’t get a day off for starters.

Rose: We’ve got a prisoner. The police box is really a police box.

The Doctor: Would you like to come out to dinner? My treat.
Margaret: Dinner and bondage. Works for me.

The Doctor: You’re pleading for mercy out of a dead woman’s lips.

Margaret: I spared her life.
The Doctor: You let one of them go but that’s nothing new. Every now and then a little victim’s spared because she smiled, ’cause he’s got freckles. ‘Cause they begged. And that’s how you live with yourself. That’s how you slaughter millions. Because once in awhile—on a whim, if the wind’s in the right direction—you happen to be kind.
Margaret: Only a killer would know that. IS that right? From what I’ve seen, your funny little happy go-lucky life leaves devastation in its wake. Always moving on because you dare not look back. Playing with so many people’s lives you might as well be a god. And you’re right, Doctor. You’re absolutely right. Sometimes you let one go. Let me go.

Margaret: One wrong move and she snaps like a promise.