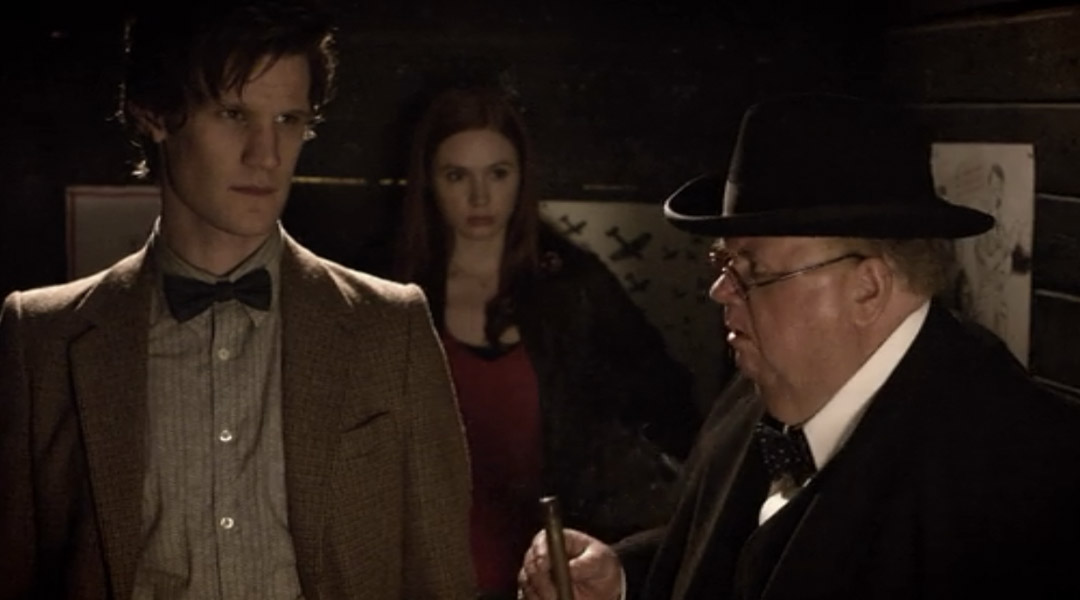 Churchill: So you’ve changed your face again.
The Doctor: Yeah. Well. Had a bit of work done.

Churchill: We stand at a crossroads, Doctor. Quite alone. With our backs to the wall. Invasion is expected daily. So I will grasp with both hands anything that will give us an advantage over the Nazi menace.
The Doctor: Such as?

Churchill: Doctor! This is Professor Edwin Bracewell. Head of our Ironsides Project.

Amy: What was that?
The Doctor: That wasn’t human. That was never human technology. That sounded like— Shouldn’t be. Show me! Show me what that was!
Professor Edwin Bracewell (Bill Paterson): Advance.
Churchill: Our new secret weapon! {a Dalek comes out.} What do you think? Quite something, eh?

The Doctor: Listen to me. Just listen. The Daleks have no conscience. No mercy. No pity. They are my oldest and deadliest enemy. You can not trust them.
Churchill: If Hitler invaded Hell I would give a favorable reference to the Devil.

Bracewell: Stop it! Stop it! Please, what are you doing? You are my Ironsides.
Dalek: We are the Daleks.
Bracewell: But I created you!
Dalek: No. {they take off his hand.} We created you!

Amy: What just happened, Doctor?
The Doctor: I wanted to know what they wanted. What their was plan. I was their plan.

Amy: So what do you we do? Is this what we do now, chase after them?
The Doctor: This is what I do, yeah. And it’s dangerous so you wait here.
Amy: What, so you mean I’ve got to stay down here in the middle of the London Blitz?
The Doctor: Safe as it gets around me.

Amy: What’s he expect us to do now?
Churchill: KBO, of course!
Amy: What?
Churchill: “Keep Buggering On.”

The Doctor: How ’bout that cuppa now, then?
Dalek: It is the Doctor! Exterminate!
The Doctor: Wait wait wait! I wouldn’t if I were you. TARDIS self-destruct. And you know what that means. My ship goes, you all go with it.
Dalek: You would not use such a device!
The Doctor: Fine. Ah ah ah ah ah! No scans. No nothing. One move and I’ll destroy us all, have you got that? TARDIS bang bang, Daleks BOOM! Good boy. This ship’s pretty beaten up. Running on empty, I’d say. Like you. When we last met, you were at the end of your rope. Finished.
Dalek: One ship survived.
The Doctor: And you fell back through time, yes. Crippled, dying.
Dalek: We picked up a trace. One of the progenitor devices.

The Doctor: Progenitor, what’s that when it’s at home?
Dalek: It is our past. And our future.
The Doctor: ‘Cor. That’s deep. That is deep for a Dalek. What does it mean though?
Dalek: It contains pure Dalek DNA. Thousands were created, all were lost. Save one.
The Doctor: Okay, but there’s still one thing I don’t get though. If you’ve got the progenitor why build Bracewell?
Dalek: It was necessary.
The Doctor: But why? I get it. Oh I get it. I get it! Oh ho! This is rich! The progenitor wouldn’t recognize you, would it? It saw you as impure. Your DNA is unrecognizable as Dalek.
Dalek: A solution was devised.
The Doctor: Yes, yes. Me. My testimony. So you set a trap. You knew that the progenitor would recognize me, Daleks’ greatest enemy. It would accept my word, my recognition of you. No no no. What are you doing?
Dalek: Withdraw now, Doctor, or the city dies in flames!
The Doctor: Who are you kidding? This ship is a wreck. You don’t have the power to destroy London.
Dalek: Watch as the humans destroy themselves.

Churchill: Now I don’t give a damn if you’re a machine, Bracewell. Are you a man?

The Doctor: Blimey, what do you do to the ones who mess up?

The Doctor: Either you turn off your clever machine or I’ll blow you and your new paradigm into eternity.
iDalek Snow: And yourself?
The Doctor: Occupational hazard!
iDalek Indigo: Scan reveals nothing. TARDIS self-destruct device non-existent.
The Doctor: Alright, it’s a Jammie Dodger. But I was promised tea!

iDalek Snow: The Doctor has failed! His compassion is his great weakness. Daleks have no such weakness.

Churchill: Goodbye, Miss Pond.
Amy: It’s been amazing meeting you.
Churchill: I’m sure it has.

Amy: So you have enemies then.
The Doctor: Everyone’s got enemies.
Amy: Yeah but mine’s the woman outside Budgens with the mental Jack Russell. You’ve got, you know, like archenemies.