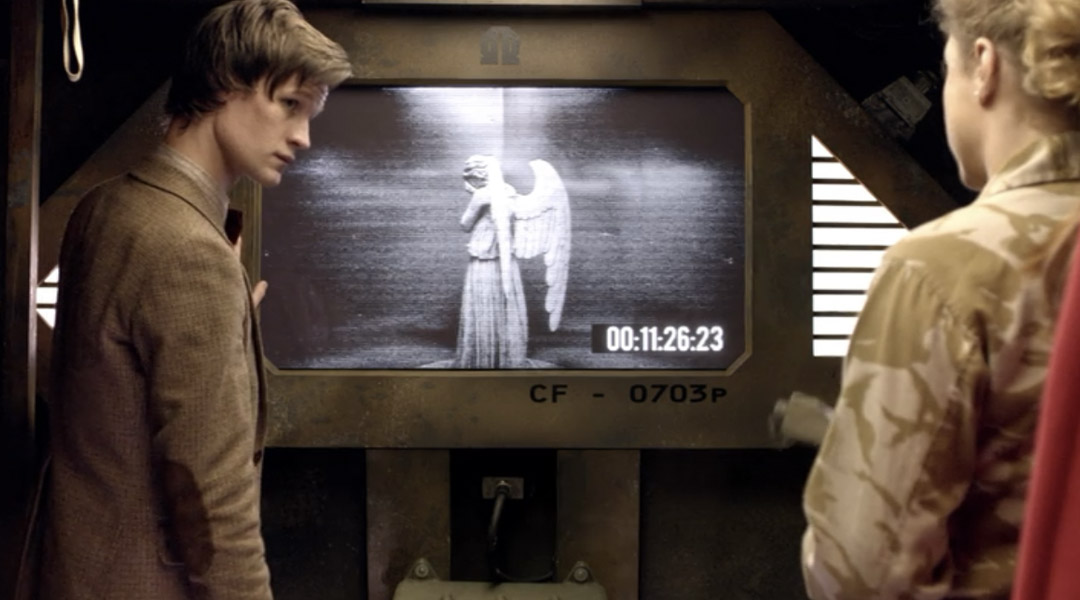 The Doctor looking through the display cases: Wrong. Wrong. Bit right, mostly wrong. I love museums!
Amy: Yeah, great. Can we go to a planet now? Big spaceship, Churchill’s bunker. Let’s hit a planet next.
The Doctor: Amy this isn’t any old asteroid. It’s the Delirium Archive. The final resting place of the Headless Monks. The biggest museum ever.
Amy: You’ve got a time machine. What do you need museums for?
The Doctor: Wrong! Very wrong. Oo! One of mine. Also one of mine.
Amy: Oh I see. It’s how you keep score.

The Doctor: There were days—there were many days—these words could burn stars… and raise up empires… and topple gods.
Amy: What does this say?
The Doctor: “Hello Sweetie.”

Amy: Why are we doing this?
The Doctor: ‘Cause someone on a spaceship twelve thousand years ago is trying to attract my attention. Let’s see if we can get the security playback working.

Alistair (Simon Dutton): The party’s over, Dr. Song. Yet still you’re on board.
Dr. River Song: Sorry Alistair. I needed to see what was in your vault. Do you all know what’s down there? Any of you? Because I’ll tell you something, this ship won’t reach its destination.
Alistair to the guards: Wait ’til she runs. Don’t make it look like an execution.
Dr. River Song: Triple-7 5 slash 3 4 9 by 10. Zero 12 slash Acorn. Oh, and I could do with an air corridor.
Amy: What’s that? What did she say?
The Doctor: Coordinates!
River: Like I said on the dance floor, you might want to find something to hang on to.

The Doctor: …oxygen-rich atmosphere, all toxins in the soft band, eleven hour day and… {sniffs the air} chances of rain later.
River: He thinks he’s so hot when he does that.

Amy: How come you can fly the TARDIS?
River: Oh, I had lessons from the very best.
The Doctor flattered: Well… yeah.
River: It’s a shame you were busy that day.

Amy: Are you going to introduce us?
The Doctor: Amy Pond. Professor River Song.
River gasps: I’m going to be a professor some day, am I? How exciting! {she laughs} Spoilers.

River: Two things always guaranteed to turn up in a museum. The home box of a category four Starliner and, sooner or later, him. It’s how he keeps score.

The Doctor: I’m nobody’s taxi service! I’m not going to be there to catch you every time you feel like jumping out of a spaceship.
River: And you are so wrong.

River: There’s a thing in the belly of that ship that can’t ever die. Now he’s listening.

River: Where are we up to? Have we done the Bone Meadows?
Amy: What’s the book?
The Doctor: Stay away from it.
Amy: What is it though?
The Doctor: Her diary.
River: Our diary.
The Doctor: Her past. My… future. Time travel. We keep meeting in the wrong order.

Father Octavian (Iain Glen): You promised me an army, Dr. Song.
River: No. I promised you the equivalent of an army. This is the Doctor.

Father Octavian: Has Dr. Song explained what we’re dealing with here?
River: Doctor, what do you know of the Weeping Angels?

The Doctor: Catacombs. Probably dark ones. Dark catacombs. Great.
Octavian: Technically, I think it’s called a “Maze of the Dead”.
The Doctor: You can stop anytime you like.

The Doctor: You’re still here. Which part of “wait in the TARDIS until I tell you it’s safe” was so confusing?
Amy: Are you all Mr. Grumpy Face today?
The Doctor: A Weeping Angel, Amy, is the deadliest, most powerful, most malevolent lifeform evolution has ever produced and right now one of them is trapped inside that wreckage, and I’m supposed to climb in after it with a screwdriver and a torch and—assuming I survive the radiation long enough and assuming the whole ship doesn’t explode in my face—do something incredibly clever which I haven’t actually thought up yet. That’s my day. That’s what I’m up to. Any questions?
Amy: Is River Song your wife? ’Cause she’s someone from your future. And the way she talks to you, I’ve never seen anyone do that. She’s kind of like, you know, “Heel boy.” She’s Mrs. Doctor from the future, isn’t she? Is she going to be your wife one day?
The Doctor: Yes. {pause.} You’re right. I am definitely Mr. Grumpy Face today.

Amy: Why do they call him “Father”?
The Doctor: He’s their bishop, they’re his clerics. It’s the fifty-first century. The church has moved on.

Amy: But it’s just a statue.
River: It’s a statue when you see it.
The Doctor: Where did it come from?
River: Pulled from the ruins at Razzmahan into last century. It’s been in private hands ever since. Dormant all that time.
The Doctor: There’s a difference between dormant and patient.

The Doctor: The hyperdrive would have split open on impact. That whole ship’s going to be flooded with dry and bare radiation, cracked electrons, gravity storms. Deadly to almost any living thing.
Octavian: Deadly to an Angel?
The Doctor: Dinner to an Angel. The longer we leave it there the stronger it will grow.

The Doctor: You lot, you’re everywhere. You’re like rabbits! {pleased} I’ll never get done saving you.

River: It’s so strange when you go all baby-face. How early is this for you?
The Doctor: Fairly early.
River: So you don’t know who I am yet.
The Doctor: How do you know who I am? I don’t always look the same.
River: I’ve got pictures of all your faces. You never show up in the right order though. I need the Spotter’s Guide.

Amy: Where are we? What is this?
River: It’s an Aplan Mortarium. Sometimes called a Maze of the Dead.
Amy: What’s that?
The Doctor: Well if you happen to be a creature of living stone— {he throws the grav globe} Perfect hiding place.
Octavian: I guess this makes it a bit trickier.
The Doctor: A bit, yeah.
Octavian: A stone angel on the loose amongst stone statues. Lot harder than I prayed for.
River: A needle in a haystack.
The Doctor: A needle that looks like hay. A hay-like needle of death. A hay-like needle of death in a haystack of, ah, statues. No, yours is fine.

Octavian: He doesn’t know yet, does he? Who and what you are.
River: It’s too early in his time stream.
Octavian: Well make sure he doesn’t work it out. Or he’s not going to help us.
River: I won’t let you down. Believe you me, I have no intention of going back to prison.

River: Yes we are.
The Doctor: Sorry, what?
River: Talking about you.
The Doctor: I wasn’t listening. I’m busy.
River: Ah. The other way up. {The Doctor looks at the device and then turns it the right way up}
The Doctor: Yeah.
Amy: You’re so his wife.
River: Oh Amy Amy Amy. This is The Doctor we’re talking about. Do you really think it could be anything that simple?

River: Incredible builders, the Aplans.
The Doctor: Had dinner with their chief architect once. Two heads are better than one.
Amy: What, you mean you helped him?
The Doctor: No, I mean he had two heads.

The Doctor: That book, the very end, what did it say?
River: Hang on.
The Doctor: Read it to me.
River: “What if we had ideas that could think for themselves? What if one day our dreams no longer needed us? When these things occur and are held to be true, the time will be upon us. The Time of Angels.”

The Doctor: Lovely species, the Aplans. We should visit them some time.
Amy: I thought they were all dead.
The Doctor: So is Virginia Woolf. I’m on her bowling team.

The Doctor: Very relaxed. Sort of cheerful. Well that’s having two heads, of course. You’re never short of a snog with an extra head.

The Doctor: ‘Course then they started having laws against self-marrying. I mean, what was that about? But that’s the church for you. Ah, no offense. Bishop.
Octavian: Quite a lot taken if that’s all right, Doctor.

The Doctor: Every statue in this maze—every single one—is a Weeping Angel. And they’re coming after us.

The Doctor: Bob. Sacred Bob. It’s me, the Doctor. Where are you now?
Octavian: I’m talking—
The Doctor: Yep yep yep. Shut up.
Bob (David Atkins): I’m on my way up to you, sir. I’m homing in on your signal.
The Doctor: Well done, Bob. Scared keeps you fast. Told you didn’t I. Your friends, Bob. What did the Angels do to them?
Bob: Snapped their necks, sir.
The Doctor: See that’s odd. That’s not how the Angels kill you. They displace you in time unless they needed bodies for something.
Octavian: Bob. Did you check their data banks for vital signs? We may be able to initiate a rescue.
The Doctor: Oh don’t be an idiot! The Angels don’t need you alive. Bob, keep running. But tell me, how did you escape?
Bob: I didn’t escape, sir. The Angel killed me too.
The Doctor: What do you mean, the Angel killed you too?
Bob: Snapped my neck sir. Wasn’t as painless as I expected but it was pretty quick, so that was something.
The Doctor: If you’re dead how can I be talking to you?
Bob: You’re not talking to me sir. The Angel has no voice. They stripped my cerebral cortex from my body and reanimated a version of my consciousness to communicate with you. Sorry about the confusion.
The Doctor: So when you say “you’re”
on your way up to us…
Bob: It’s the Angel that’s coming sir, yes.

The Doctor: Angel Bob. Which Angel am I talking to? The one from the ship?
Angel Bob: Yes sir.
And the other Angels are still restoring.
The Doctor: Ah! So the Angel is not in the wreckage. Thank you!

Angel Bob: The Doctor. Can I speak to the Doctor please?
The Doctor: Hello, Angels. What’s your problem?

The Doctor: Okay. The Angels have made their second mistake because I’m not going to let that pass. I’m sorry you’re dead, Bob, but I swear to whatever is left of you they will be sorrier.
Angel Bob: But you’re trapped sir. And about to die.
The Doctor: Yeah. Trapped. And you know what? Speaking of traps, this trap’s got a great big mistake in it. A great big whopping mistake!
Angel Bob: What mistake sir?

The Doctor: I’m about to do something incredibly stupid and dangerous. When I do, jump.

Angel Bob: Sorry, can I ask again? You mentioned a mistake we’ve made.
The Doctor: A big big mistake. Really huge. Didn’t anyone ever tell you? There’s one thing you never put in a trap—if you’re smart, if you value your continued existence, if you have any plans about seeing tomorrow—there’s one thing you never ever put in a trap.
Angel Bob: And what would that be, sir?
The Doctor: Me.